Photos from the trip are on Google Plus 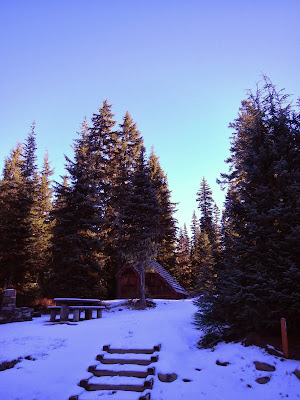 I anxiously watched the weather forecast and snow levels for weeks. It had been an unusually dry and sunny fall. As much as I enjoyed the blue skies and cold, starry nights in Corvallis, I worried that my annual Thanksgiving snowshoe trip wouldn’t require snowshoes. Snow or no, I was going to embark on my pilgrimage as scheduled and Aaron was coming with me. We drove out of town after a hearty dinner on Wednesday night.

By the light of our headlamps

The trek began from the Gold Lake Sno-Park, which was completely empty. We trotted across highway 58 to begin the 2 mile road walk to the snow shelter at Gold Lake Campground. The gravel road surface was apparent, with little patches of snow and ice covering up small bits. We inched along, and I felt every ounce of pack weight on my back. See, in order to make sure my hiking partners want to go hiking with me again, I feed them very well. And since Thanksgiving was tomorrow, I filled up my pack with all the traditional Turkey Day accompaniments, plus the heaviest pie I’ve ever seen.

Although the road follows a mellow, declining grade the entire way to the shelter, it felt like an arduous uphill walk. I obviously hadn’t carried that much weight in a long time. I was thrilled to catch sight of the campground sign, meaning we were just a hop, skip and a jump away from the shelter.

As expected, the shelter was empty. We built a fire, unpacked, and hung out for a bit before calling it a night. A chilly, chilly, night. 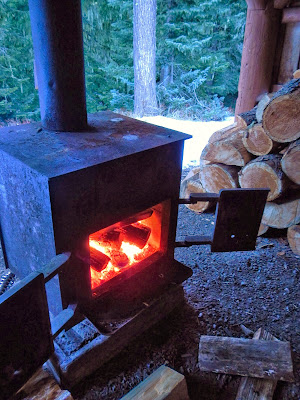 The next morning began with a warm fire, an oatmeal breakfast, and a casual start to the hike. We strapped our snowshoes to our packs and walked through the depressingly intermittent snowpack up to the cabin. The trail surface ranged from frictionless ice to hard snow to bare dirt. As we trudged uphill, we stopped to identify the occasional animal track left behind in the snow. Some big cat had walked here before us. Deer, rabbits, and other small critters had also traipsed through the forest.

We crossed Skyline Creek on a narrow log, then continued up the trail. Here we found clear snowshoe tracks, left some indeterminate time before. They looked fresh, so we mentally prepared for having to share our space in the cabin with another party. 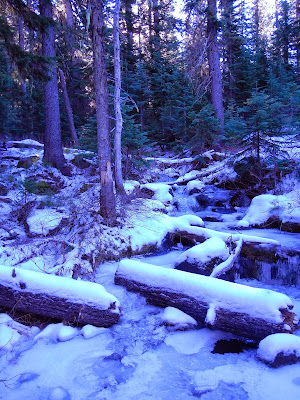 A short, two hour hike brought us right to the Maiden Peak Cabin. Boy, was I happy to throw my pack off. The cabin was just as I’d remembered, but much less wood was cut and stocked for this year’s trip. The old log book was gone and replaced with a new one just last month, so there were only a few entries to read. The last group had left behind a pot encrusted with some sort of bean soup. It was pretty icky.

We sat outside on some uncut logs and ate lunch in the bright, warm, sunshine. It was cold inside the cabin. Aaron stepped away to split wood for the fireplace and I sat outside doing crossword puzzles until the sun sunk down below the trees for good. Now we just had to twiddle our thumbs until dinnertime.

Each year, there’s a new twist on the Thanksgiving meal. For dinner, all the usual suspects were there. But for dessert, there was a fabulous surprise. The main course consisted of: 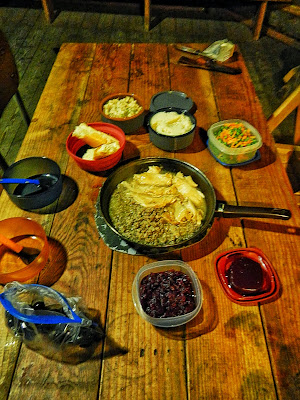 Using both the hot woodstove and my camp stove, I quickly reheated all the meal components and we sat down to dinner. It was typical in that there was way too much food and we ate until our bellies were creaking and splitting at the seams. Aaahhh. But wait, we haven’t had dessert yet…

After dinner settled down a bit, I pulled out the ice cream ball and ice cream-making supplies: cream, sugar, and vanilla. I poured these ingredients into the chamber in the ice cream ball and sealed it tight. Then, we packed the other side full of snow and rock salt, then proceeded to kick the ice cream ball back and forth on the floor, soccer ball style, for the next 20 minutes. At the end, we had freshly made vanilla ice cream to put on top of the berry pie we’d been eyeing for days.

The next morning, somehow, we still had room for a big breakfast. I laid out the morning’s feast and put a game plan to get everything cooked and warm at the same time for a nice meal. I put the two house skillets on the wood stove to heat up as Aaron scrambled the eggs and I read the directions on the carton of dehydrated hash browns we found in the cabin free-for-all bucket. I put butter in each of the pans, one for eggs and one for potatoes—just then remembering I had packed in bacon for breakfast, too. And so, butter-fried bacon was born. 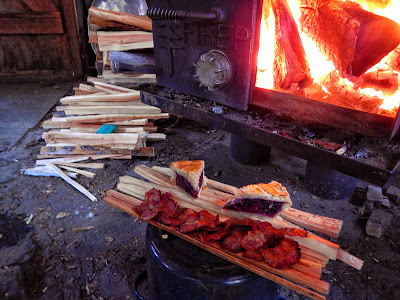 We gorged on eggs, hash browns, buttery bacon, and warm pie.  It was delicious.

The weather outside looked delightfully bright and clear. I was excited to continue the tradition of hiking to the summit of Maiden Peak post-Thanksgiving day. Aaron and I repacked for the 6-mile dayhike, knowing we had plenty of time to get up and down the mountain by the early afternoon.

We headed out on snowshoes today, mostly because they offered some traction on the hard snow and slick ice. Previous human tracks made route-finding easy; this was the first year there was any hint of human presence before my arrival. Aaron led the way as we walked through the trees up the gentle grade of the snowy trail. Soon we were again treated to numerous animal tracks imprinted into the snow. We found what looked like wolverine tracks that were as big as Aaron’s hand. For years I’d seen the wolverine sign in the cabin thinking, yeah, whatever, wolverines… But these tracks were like nothing I’d seen before. We took a ton of pictures, then wandered back to the trail. 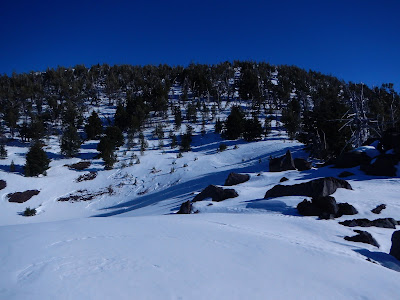 We walked nearly non-stop until we reached the summit. That big, hearty breakfast offered a nice mix of slow-burn and fast-burn fuel to maintain our energy for the two hour uphill snowshoe. Although we lost the trail in the trees nearing the top, we picked it up again past the false summit. We followed the trail as it contoured along the north side of the conical mountain and doubled back towards the highpoint. Beautifully windswept snow decorated the mountaintop. At the summit, bare ground peeked out in places. I’d never seen Maiden Peak with this little snow on top!

We dallied here for over an hour, taking pictures, eating lunch, and wandering around the summit area. Lunch involved a variation on the traditional day-after-Thanksgiving-turkey-sandwich: crackers spread with cream cheese, whole berry cranberry sauce, and slivers of cold turkey. We were really slumming it on this trip. 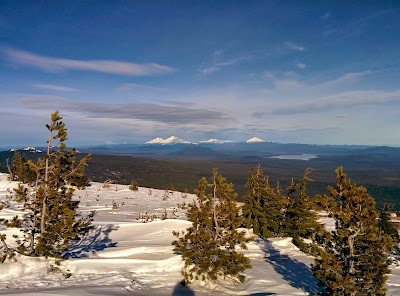 The bare ground revealed signs of an old lookout tower and a USGS benchmark. Views extended to Diamond Peak, Thielsen and Bailey to the south and the Sisters, Bachelor, Broken Top and Jefferson to the north. The longer we stayed, the more ominous the gray clouds appeared over the north central Cascades. Weather appeared to be moving in for the night. Click to see a 360 degree photosphere taken from the summit.

We walked back to the cabin, where we spent another relaxing evening eating lots of food and playing games. A light drizzle fell as the night pressed on, and we went to sleep hoping to see fresh snow in the morning.

Instead of fresh snow, we awoke to clear, blue skies and a pretty sunrise over some fleeting, low clouds. Breakfast consisted of hot cornmeal mush with coconut milk, dried apricots and mixed nuts, plus bagels toasted in bacon grease and butter, then spread with cream cheese. I could barely get it all down. After breakfast, we packed up all our gear and kept waiting for the rain clouds to move in. They never came. We swept and cleaned up the cabin, leaving it in better shape than we found it. Another stay had come to an end and it was time to haul the last 5 miles out.

Miraculously, the weather held, and we enjoyed a sunny but brisk morning walk. Once we reached Gold Lake road, the snow was all but gone. It was ugly and brown, and much unlike any other road, it went uphill in both directions. While the road walk felt uphill on the hike in, it was actually uphill on the walk out. Ugh.

But the final slog was broken up with beautiful ice formations created by the freezing and thawing of puddles on the road. As we walked, we stopped frequently to observe and admire the unique shapes and structures created by the ice. Pointy stars, long struts, arching walls, and delicate crystals created striking patterns in the frozen puddles. It was like walking through a natural art museum. 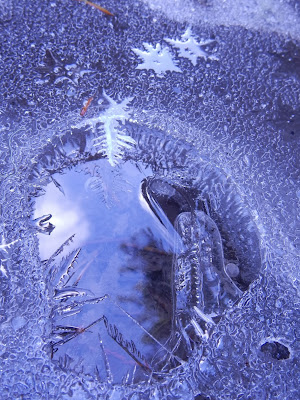 We hadn’t encountered another visitor in the entire trip, making two years in a row of solitude at the cabin. And while I’ve seen the same, exact trails on roughly the same dates for five years in a row, each year has proved to be a distinctively special trip. I can only guess what excitement and adventure awaits me next year.