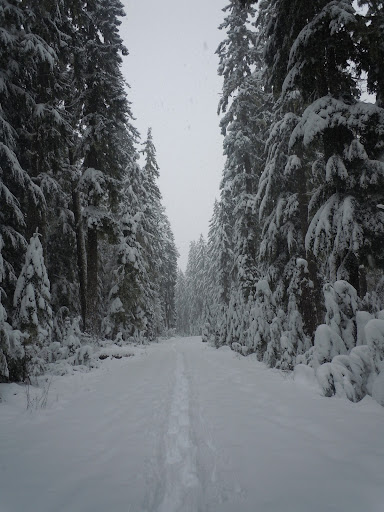 Every year I try to get out and do some exploring over winter break. I’ve always done it solo, but this year someone was adventurous enough to join me in my foolish road-tripping. Knowing I’d have a partner with me, I planned accordingly: nothing too crazy, but just crazy enough to make him want to hit the road with me again someday.

What’s more, it was day three of the 12 Days of Christmas Socks, and I had some serious picture-taking to do. This was bound to be a trip to remember.

As we drove over Santiam Pass I talked up the snowshoe trek that would christen our trip: the Prairie View Loop. According to Snowshoe Routes Oregon, this trip “is a good trail to take some snowshoe ‘newbies'” so I thought it would be a nice introduction to snowshoeing for Aaron. On a nice day it would offer up spectacular views for little effort and very moderate elevation change. Perfect. Although it was snowing today and there would be no views, I figured a short ramble through the trees would provide an excellent first experience.

If you were watching a horror movie right now, this is where you’d hear a suspicious noise in the background and yell “don’t go up the stairs!!”

We spilled out of the car, which was stuffed to the gills with firewood and winter camping gear, and suited up for snowshoeing. Lunch in the packs, gaiters and snowshoes on, ski poles adjusted, wind and snow layers packed away neatly, appropriate hats and gloves donned. Check, check, check. We were ready to go.

We got moving around 11 am. The route followed a gently inclining forest road that would be passable to motor vehicles in the summer. We took our first right up another road and wandered along past several other unmarked roads that did not exist on the map. Snowshoeing through fresh, wet, heavy snow is hard work, so the time passed quickly while the miles passed slowly. I had a hard time judging just how far we’d gone when we suddenly dead-ended at a Y-junction to nowhere. Both forks of the Y petered out to nothing, and there were no trail markings anywhere. According to the map, there was a sharp right angle in the trail that crossed a small creek and continued off in a northerly direction on the other side. But there was no sign of anything, and we’d barely just gotten going. I didn’t want to turn around yet. We poked around in the woods a bit, then turned to walk back along our tracks. I scoured the side of the trail and looked towards a valley that looked like the perfect place for a creek to be. 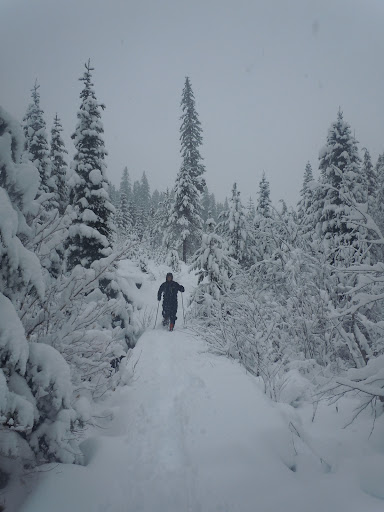 Buried deep in the trees was a little blue diamond with an arrow on it, barely visible from the road. Aha! We walked down to the diamond and after a little trudging, located the creek and a snow-covered footbridge. I carefully poked around on the bridge with my ski poles to make sure it was still intact, then crossed to the other side. Aaron followed after capturing some video, during which I am sure he was hoping to catch me falling in the creek 🙂

On the other side, we entered a clearing with lots of tree stumps and paths potentially leading anywhere. Aaron spotted the continuation of the road, so we got back on course. This road was covered over with lots of fallen trees, adding another layer of challenge to our snowshoe adventure. This felt like a long-forgotten route.

We arrived at another Y-junction, not on the map, and decided to turn left. This ended up being the shortcut we didn’t want to take, so on the other side we turned north again to try and pick up the non-motorized trail, which would be more interesting than the road. 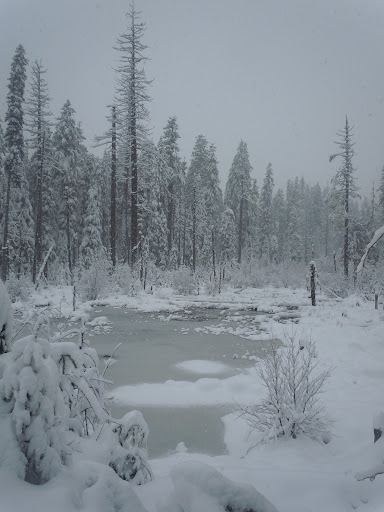 Again, the junction with the trail was not well-signed, so we began poking around in the woods once we estimated we’d traveled far enough. Miraculously, we found it fairly quickly and headed off into the trees.

It was very pretty here, walking in, around, and over the snow-covered trees. Snow continued to drift down from the sky, making me feel as if I was ambling through a life-sized snow globe. Somewhere along the way we ducked under a large, umbrella-shaped tree to get out of the snow and eat some lunch. Then, we continued along the trail.

The trail abruptly ended at an impassable bog. Large trees littered the forest floor and everything in the general area seemed to be covered with inches of standing water. There was a blue diamond with an arrow pointing into a stand of thick shrubbery growing in the water. That surely couldn’t be the way? We looked around for a little while, then decided to bail towards the road, which was just a hundred yards away. We took the road back to finish the loop. The next hour felt like FOREVER. The snow had changed to wet snow and felt an awful lot like rain. My gloves and hat were starting to soak through. Group morale was starting to drop. We had no idea where we were or if we should have taken any of the unmarked junctions we passed. Based on our snail’s pace, I didn’t think we’d gotten to our junction yet. Okay, we decided, just a little bit further…

And sure enough there it was. A road sign saying 2 miles to the Sno-Park. 2 miles?! That didn’t jive with our map or any degree of common sense at all. But at least we knew it would get us back, so we took it. In 30 minutes we arrived back at the car–so the sign was probably wrong, or based on some creative Forest Service rounding rules. Four-and-a-half hours total? That was some intro to snowshoeing.

It felt really good to get those wet clothes off. 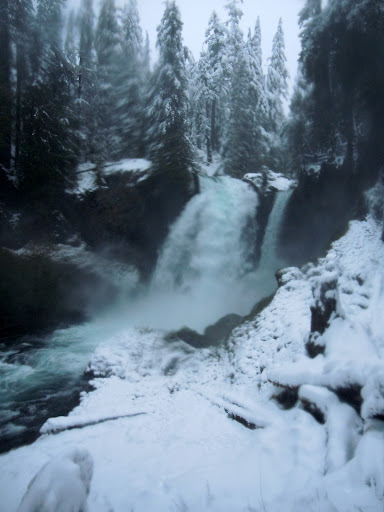 Since we were out there, we decided to take a quick run to Sahalie Falls. The parking lot wasn’t plowed so we parked on the roadside and ran down to check out the falls. It was raging. My camera was fairly well hydrated so the photos don’t paint the best picture, but trust me, it was worth the short walk.

We got back in the car and decided we didn’t want to camp in the rain/snow tonight, so we drove east. We stopped on BLM land outside of Smith Rock State park and called it a night.

The wind was blowing, hard, as we set up camp, ate dinner and relaxed by the fire. We put the tent up near a tree hoping for some wind protection but the rain fly was still whipping around all night. Day 1 was under our belts and we had much more adventure yet to come.

View all the photos on Picasa.