October was the month of rock climbing, so I was long overdue for a long walk in the woods by myself. I had unfinished business with the Rebel Rock trail so I decided to do the entire loop as described in the Sullivan green book. 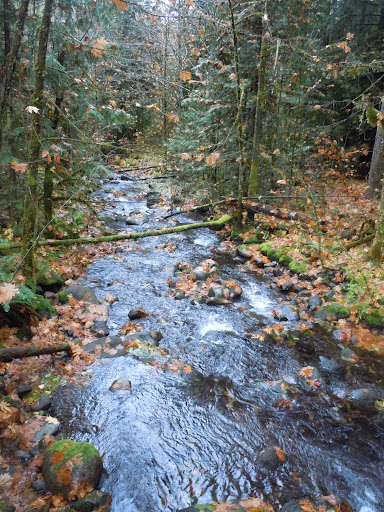 Just up the road from Terwilliger Hot Springs was a small trailhead where my journey began. The trail branches immediately, with the Rebel Creek trail heading left and the Rebel Rock trail heading right. I went left. Here, the ground was wet and covered with fallen leaves. Rebel Creek was closeby. There are two cute little bridges crossing the creek, then the trail angles up the hillside as it gradually gains elevation. About a half an hour into my walk I began to notice snow dusted across the plants on either side of the trail. Another half an hour and the snow had a bit more substance to it. Before I knew, I was glad that I’d worn gaiters today. 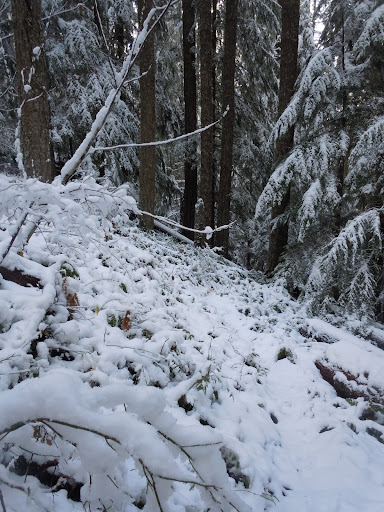 It was mall Santa snow. The texture was crisp, dry and light. Even when the drifts reached up past mid-calf, it felt like walking through air. I reveled in the magic of the season’s first snow, and playfully kicked my feet through the powdery white stuff as I giggled a bit and smiled widely. With each step I looked in amazement at the gorgeous, quiet forest. The sun poked through the clouds and light trickled down onto the surface of the snow, making it sparkle. As I proceeded, the snow got deeper and the trail became more obscured. Under cover of trees, the trail was mostly very obvious. But as the trail crossed meadows or made sharp switchbacks, it became increasingly more difficult to find. There was no sign of human bootprints anywhere along the path. 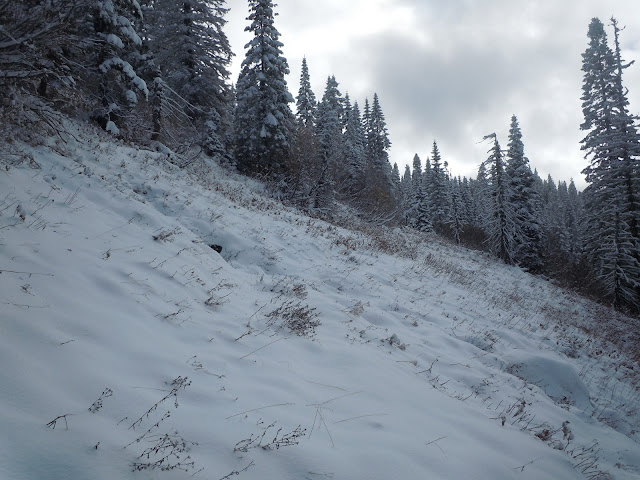 I snapped out of my reverie and tuned back into the environment so I wouldn’t get lost. After crossing one particularly challenging meadow I took out the book and tried to sort out where I was.

Along this route I was hoping to have lunch at the Rebel Rock Lookout Tower, which was not supposed to be easy to find. According to Sullivan, four large rock cairns marked the short side trail to the tower. I wasn’t expecting the cairns to be there, and I certainly didn’t think I’d find them beneath the snow. I proceeded to amble along the ridge, enjoying a view through the clouds across the McKenzie River, trying to sort out where a lookout tower might be. I ended up backtracking just before I reached the tower, thinking I’d missed it. 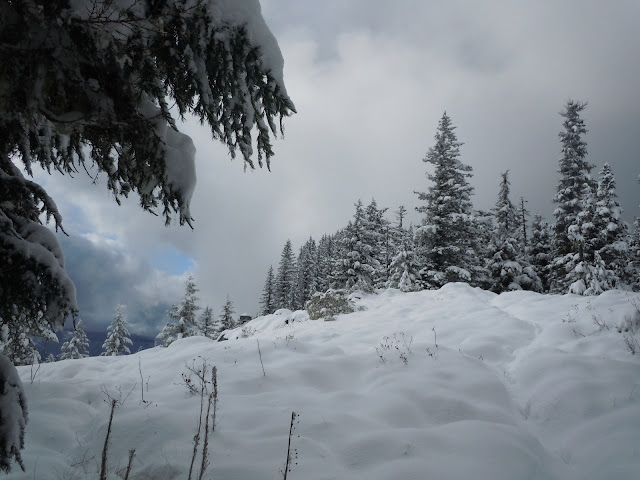 Can you see the lookout tower?

Eventually I caught a view of the tower ahead and found the trail with little trouble. The spur was short and leads right to the edge of a cliff, with the dilapidated tower hanging on to life by a thread. The tower was surrounded by mats of slippery vegetation. Sheets covered over broken glass windows. Some supplies were sitting on a table inside, indicating someone had been there recently. The deck had some broken boards and the place felt a little eerie. I rested there and warmed up with chicken soup, bread and cheese. Meanwhile, thick gray clouds started to roll in and it began snowing. 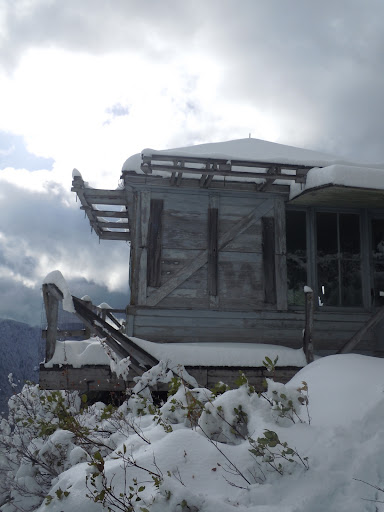 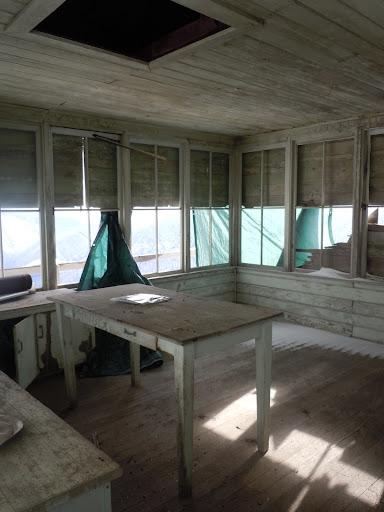 My fear of doing loop hikes in the winter is that I’ll be unable to navigate some portion of the second half of the loop and get lost. At least in an out-and-back hike you can follow your tracks in the snow that lead to the trailhead. With the clouds and snow coming I was a little nervous that I’d have trouble in the meadows up ahead.

I stayed relaxed and focused as I backtracked up the spur to my tracks on the ridge. The trail passed through a snow-covered rock field, then switchbacked down into the forest at an open viewpoint. By now the snow had stopped, and I was able to let my guard down just a little bit. 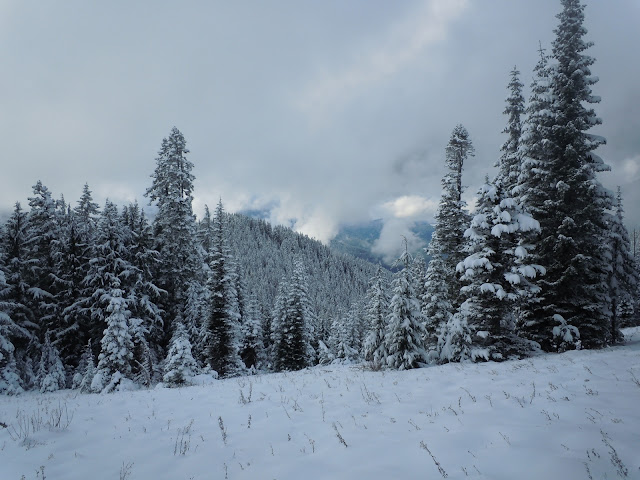 Years of experience hiking alone in the snow, without GPS or tracks to follow, must have primed my brain for seeking out subtle hints of trail. Routefinding in the second half of the loop felt nearly effortless, and even finding the “faint switchbacks” that Sullivan warned about in the book was intuitive even as snow obscured any hint of tread.

I kind of felt like I had a superpower.

The remainder of the hike was equally beautiful, quiet, and serene. Eventually I came across some old boot tracks from someone who apparently did not complete the entire loop. Poor sucker. This was an unbelievable day. The route was moderately challenging, but not impossible. The forest and snow were gorgeous. The sun was shining. Birdsong was the only noise to penetrate the quiet. And I didn’t see anyone on my trip.

I am so ready for winter. Hooray! Snow is here and the crowds are gone!