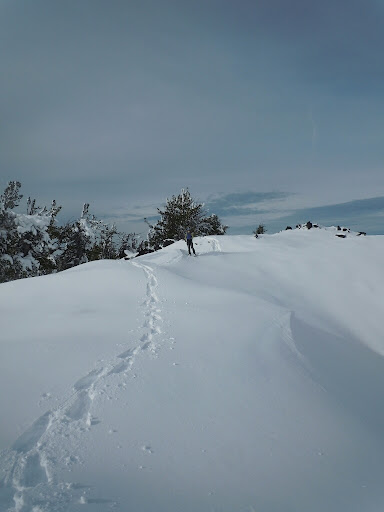 See the photos from this trip on Picasa.

This year would be different, I thought.

I left the madness of my teaching job for a simpler existence as a college student. Thanksgiving break would not provide the same respite of solitude from the fast-paced life of a high school teacher that I so desperately sought in years past. No more would I crave a break from the drama of being surrounded by crazy teenagers all day. Life was actually sort of sweet, calm, and fulfilling. So I was thrilled when my friend Sue asked if she and her husband could join me for my annual Thanksgiving tromp in the woods.

On Wednesday evening, we headed for the Gold Lake Sno-Park near Willamette Pass. We emptied out of the truck and packed our gear in temperatures just below freezing. A very light snowfall drifted down from the sky. Under the illumination of headlamps, we began to follow the road.

It was a very low snow year. Scott and Sue opted for cross-country skis and snowshoes, respectively, while I just barebooted it. There were only a few inches of unconsolidated snow on the ground that was easy to walk through. We made good time to our first destination: the 3-sided Gold Lake Shelter. We built a fire in the stove, slipped on our down booties and warm outer layers, drank some beers and chatted into the wee hours of the morning. 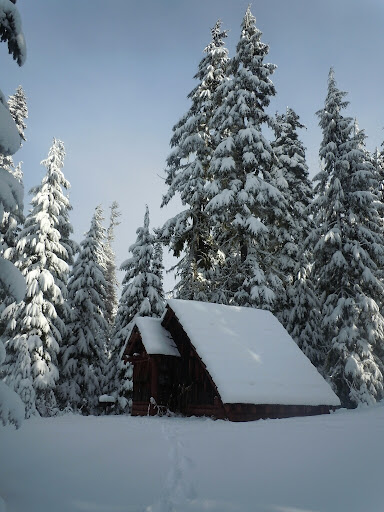 The next day, we arose to sunshine and hungry gray jays lurking about the shelter. We prepared hot breakfasts, drank tea and coffee, and lazed about the shelter. At about 9:30 am, we rolled out of the shelter and headed back up the road to the trail splitting off towards Maiden Peak cabin. Again I chose to eschew snowshoes and walk in my bare boots.

The sun felt glorious. Rays of light penetrated breaks in the treetops and gave the melting snow a soft glow. We followed the blue diamonds as they wove a fairly flat path through the forest. Eventually, the trail rose gently and offered up some views of snowy ridges to the west. As we turned back into the trees, the elevation gain began to feel more evident and the weight of Thanksgiving dinner on my back began to make my hips groan and ache. No worries, though, a 3-mile day is hardly anything to complain about.

I’d been traveling fairly well in my boots. Only occasional deep snow drifts slowed me down. But as we rounded the last few switchbacks to the cabin, I began wallowing through thigh deep snow. Sue strode smartly behind me in her snowshoes, while I kept saying to myself “I know it’s just a little bit further.” Curse you, MSR, for making the least user-friendly bindings EVER. 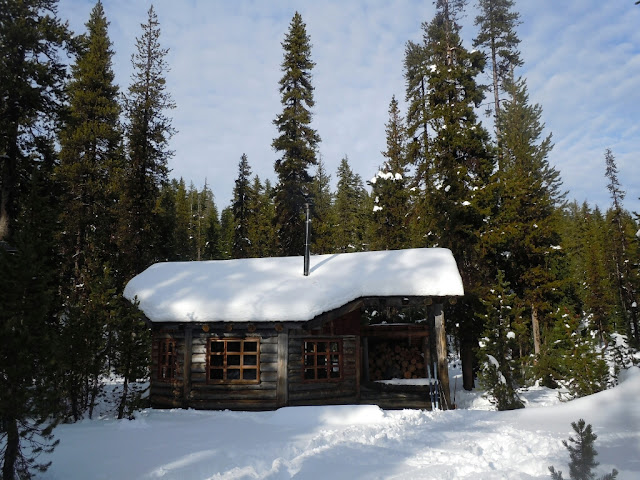 At last we found the cabin and I was happy to give my legs a rest. With three people to split chore duties, we got settled in pretty quickly. There was already a pile of split wood by the fire, so we had a running start. In just a short while, we doubled our wood supply, melted a giant pot of snow, and got our gear settled into the cabin. Socks hung to dry behind the wood stove, foam pads and wood stumps were set up for seating, camp stoves were assembled and snacks were arranged on the table. Aahhh…the creature comforts of stylish backcountry living. 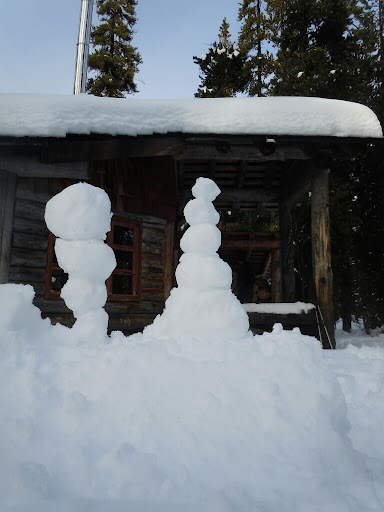 With an entire afternoon to kill, Sue and I decided to get busy making snow sculptures. Sue began with a classic snowman, then proceeded to craft more artful pieces scattered in front of the cabin. I went to work crafting a massive snow bear, which was much more involved than I anticipated. Scott went about doing his man-business, like chopping wood and whatever else men do in the forest.

Really, we couldn’t all hardly wait for Thanksgiving dinner. When the time came, we each buzzed about the cabin preparing our contributions to the feast. Stoves were raging, bowls of steaming food were covered to stay warm, and eating utensils were carefully laid out. The eggnog was cracked open and before long most of the bourbon was gone. 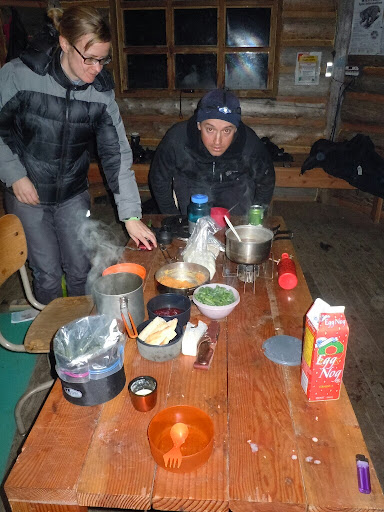 At last we sat down to enjoy our Thanksgiving meal. We had: turkey, tofurkey, gravy, meat stuffing, bread stuffing, mashed potatoes, butternut squash, green beans, cranberry sauce, bread and butter. It was a huge challenge to get it all down but we pushed through and made sure not one morsel went to waste.

We had to sit and breathe for several hours before we could even think about pie.

The weather forecast for Friday was pretty ominous. The freezing level was high, and we expected to wake up to rain at the cabin–at 6000′. Although it was warm, in the low- to mid-thirties, the air was clear and it looked like our hike to the top of Maiden Peak was a go. After breakfast (how are we still hungry?) we put on skis and snowshoes and set off in the untracked snow.

The journey from the cabin to the summit was always an adventure in years past. Wandering from one blue diamond to the next, alone, until the diamonds disappeared altogether, was mentally challenging. One year there was so much fresh snow that it was very physically demanding as well. But following my companions’ tracks through familiar terrain felt very safe and somewhat dull. It’s amazing how changing one variable can create a completely different experience. I was still happy to be outside, working hard, and sharing my time with good friends. 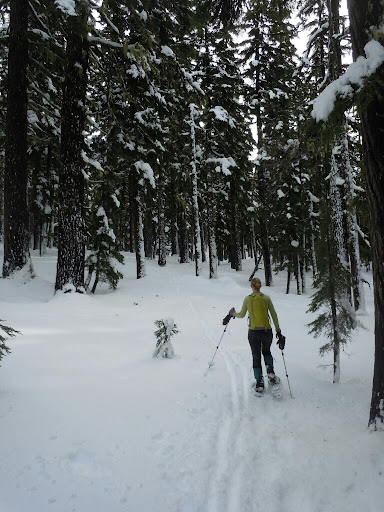 The boredom subsided, as it always does, when we approached treeline. This has always been my favorite transitional area. The anticipation of vast views and exposure to the elements got my heart racing and my legs moving more quickly. As Scott searched for the best ski terrain I veered off his path to the ridge, where there would be fewer tree wells and other hazards, as well as the awesomeness of being on the top of the ridge. Sue and I traced a route along the spine of the mountain’s subsummit to the true summit. All the while we enjoyed sneaking a look at the massive Diamond Peak to the south and then to the other Cascade volcanoes to the north. From the summit, we could see the Three Sisters, Broken Top, Bachelor, Jefferson and everything in between. The wind was blowing up here, but my big pink puffy coat kept me toasty warm. The thermos of soup I’d packed sure helped as well. 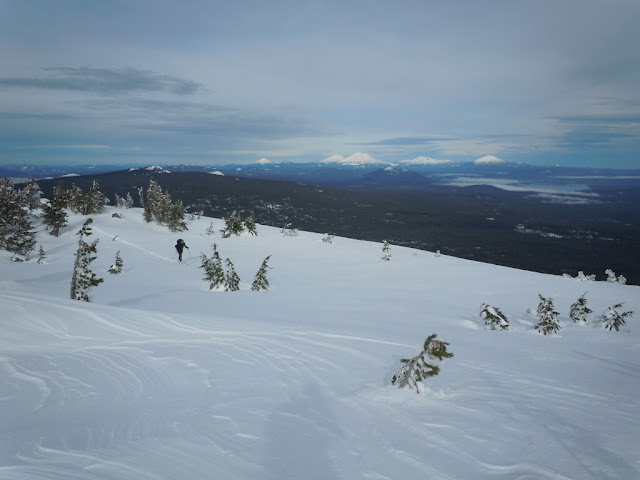 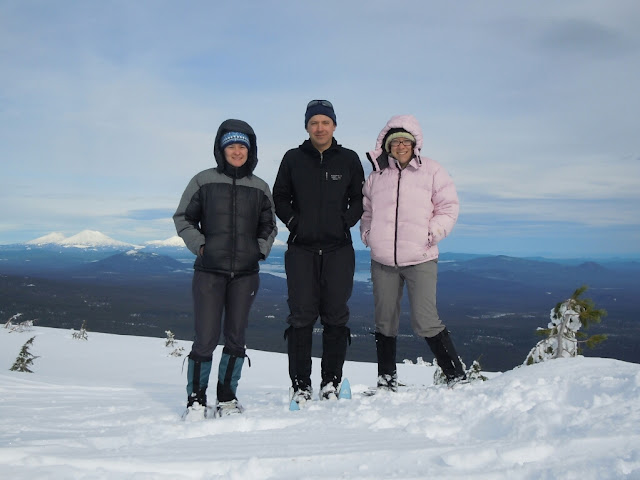 Leaving the summit was the hardest part of the trip. Scott took off on his skis while Sue and I walked down the mountain together. There was much more talking on this leg of the trip, since each breath wasn’t dedicated solely to fueling muscle contraction. It was a pleasant walk, and before I knew it we had arrived back at the cabin.

The afternoon and evening time was spent finishing off our meager stores of alcohol, playing card games, reading and listening to Radiolab podcasts. We also made some inventive culinary treats, like egg nog slushies with snow (tasted like ice cream) and pumpkin pie topped with roasted marshmallows. 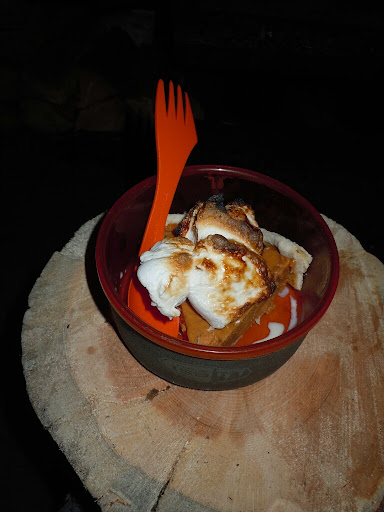 It rained all night long. In the morning we woke up to a typical Western Oregon hanging mist. Typical, except it was almost December, and we were over 6000′ above sea level on the east side of the Cascades. This just wasn’t right.

We got decked out in light clothes and rain gear for the 5 mile trek back to the truck. We kept our snowshoes on for maybe a mile before we hit patches of dirt and meager accumulations of snow. The lack of snow on the ground was thoroughly depressing. By the time we hit Gold Lake Road, the ground was mostly covered in a thin layer of water and slush. Considering I had to walk 2 miles through that stuff, my boots and gaiters did a remarkable job of keeping my feet dry. 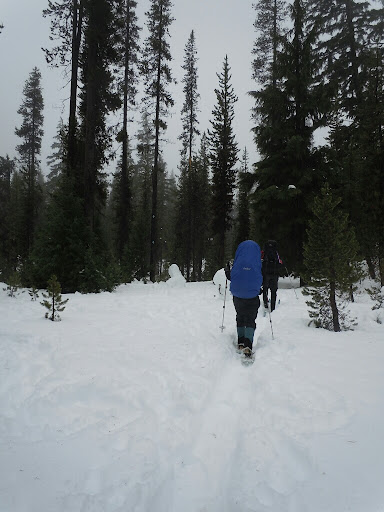 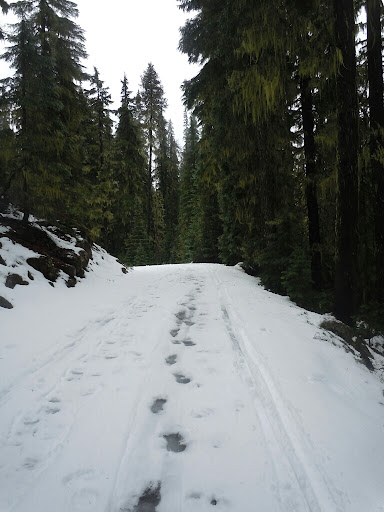 After four years of the same trip, it’s still not getting old. I neglected to mention that we didn’t see anyone out there for the duration of the trip. I love that. Visiting this special place makes for a wonderful holiday tradition that I hope to continue for years to come.