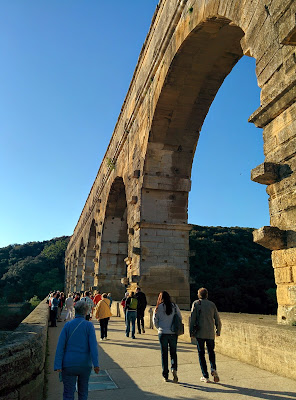 Click to view the photos from Nîmes and Pont du Gard

The Pont du Gard is a 2,000 year old Roman aqueduct that is a short bus ride from Nîmes. There are only a handful of buses heading there each day, so we boarded the early bus and arrived before the museum and shops had opened. 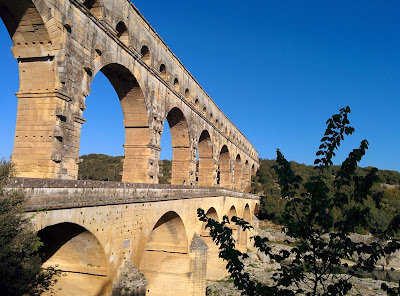 A quick walk brought us to the Pont du Gard. The sheer size of the structure was hard to comprehend. It was made of huge, golden blocks neatly stacked and formed into arches. Three stories of arches gracefully spanned the Gardon River. At the top, a narrow channel once permitted the flow of drinking water from one side of the river to the other.

We walked across the bridge and explored the trails on the other side. A sign pointed to a hillside viewpoint to the right, but dirt paths led off in all directions. We spent a good portion of the morning chasing trails, “finding” bits of stonework and ruins, and searching for secret viewpoints. Eventually, we made our way to a cute, little wildflower meadow that had an excellent view back to the Pont du Gard. 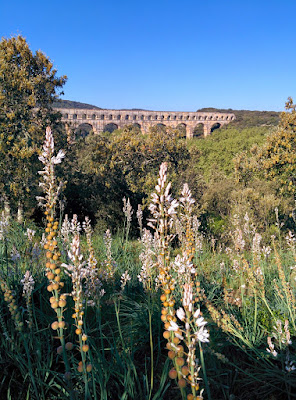 One of the best parts of this impromptu exploration was that no one else had decided to go exploring, or so it seemed. We had our own private hiking trails for hours.

After some creative scrambling we made it down to the river and hopped along the rocks to get a view of the underside of the aqueduct. We could hear lots of people on the deck above, but no one was down on the river. Again, it felt like our own special place. The river was running slowly and smoothly. Swallows flitted above our heads, diving in and out of the nests they’d built on the aqueduct. The giant structure provided welcome shade in the heat of the day. 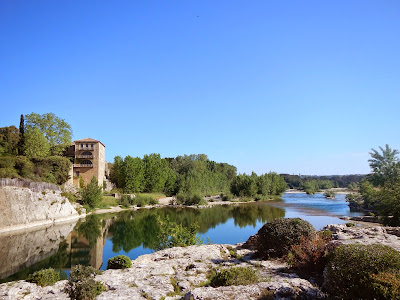 Back on the other bank of the river, we walked up to the fenced off upper portion of the Pont du Gard. We could clearly see the path that water used to flow thousands of years ago.

We made our way back to the main entrance and walked through the museum. It was overrun with groups of French schoolchildren, but we managed to weave our way through the exhibits that were not occupied. Although it was poorly lit and somewhat strangely designed, the museum had lots of informative and interesting exhibits that told the story of the ancient Romans. A combination of ancient artifacts, modern replicas, and historical photographs showed the Pont du Gard throughout time.

All the exhibits focused on one thing: water, and how to move it from one place to another. This reminded us that we were pretty darn thirsty, and hungry too. It was about lunchtime.

Picnic in the park

We grabbed some sandwiches and sodas from the cafe and ducked into the woods to get away from the crowds. We enjoyed a lovely picnic lunch, consuming the most un-American items we could find: baguette sandwiches, “Nature” chips, and a carbonated drink called Panach’.

Aaron took one sip of the aforementioned beverage and handed it to me, asking for a trade. As it turned out, Panach’ is made by Heineken, and contains a mixture of lemonade and beer. While I wouldn’t ever order it on purpose, it made a nice accompaniment to a warm spring picnic. 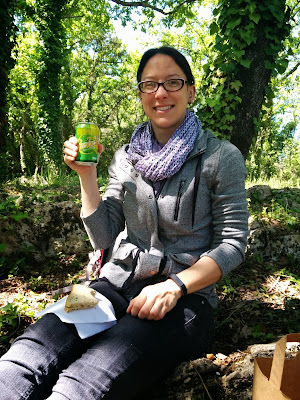 After lunch, we walked through the Mémoires de Garrigue, a Mediterranean garden located in the park near the Pont du Gard. A signed route led us through the many pathways in the garden. Here, I really wished my French was better. There were something like eighty stations scattered throughout the park, offering historical photos and facts at every station. I could tell that the signs told a story of the people in times past, and how the land was used to support the community. We made our best guesses about the stories on each sign, using help from Google Translate and the context of each sign. We learned frequently used words such as hill (colline), abri (shelter), manure (fumier) and récolte (harvest). It felt somewhat like a scavenger hunt. Again, we pretty much had the place to ourselves. 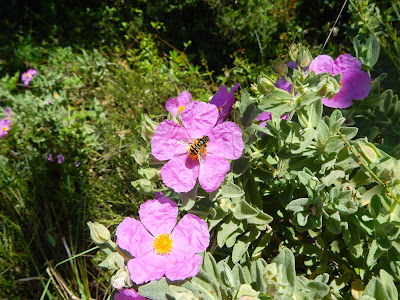 Visiting the Pont du Gard and surrounding trails and gardens was one of the highlights of the entire trip. It had it all: natural beauty that begged for exploration, incredible architecture, and educational exhibits that added depth and background to everything we saw. While the Pont du Gard was not on my to-do list heading out to France, I can’t imagine doing this trip without making the effort to visit this site. Sometimes last-minute plans turn out to be treasures.