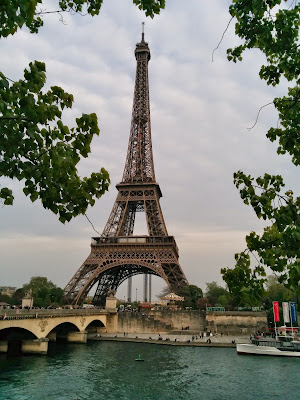 The story picks up on Paris’ Left Bank. Heading south from Notre Dame, we walked clear across the Latin Quarter to stand in line at the entrance to the Catacombs. It was lunch hour, and we hadn’t eaten yet, but we were committed to getting into this place. The pictures were compelling. Plus, it was so hot in the sun, spending some time in a cool cave sounded like just the thing.

An hour after we got in line, at last it was our turn to descend into the tunnel. We picked up a couple of audioguides and went down. Sixty feet below the city, we entered a network of tunnels. Originally a huge limestone quarry, the tunnels now house the bones of millions of Parisians. In the 18th and 19th century, Paris saw the closure of several cemeteries in an effort to improve public health. The bones were dug up and moved to their present home in the Catacombs. 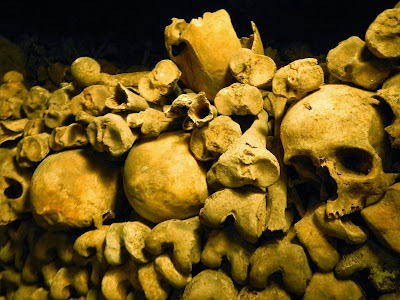 Along the tunnels there were several sayings, poems, and quotes written or carved on the walls. Simple markers indicated which cemetery the surrounding piles of bones came from. The bones were arranged in neat patterns, with the knobby ends of femurs forming walls on either side of the tunnels. Rows of carefully laid skulls added complexity to the simple pattern. The less aesthetic bones and other bits must have been buried in the deeper layers of the piles, out of view. In all, we covered over one mile of walking underground.

Besides the bones, there were a few other unique features. My favorite were the 18th centure carvings created by a quarryman in his spare time. The buildings were replicas of actual places he’d been, which is especially incredible considering iPhones weren’t invented at that time, so they were carved from memory. 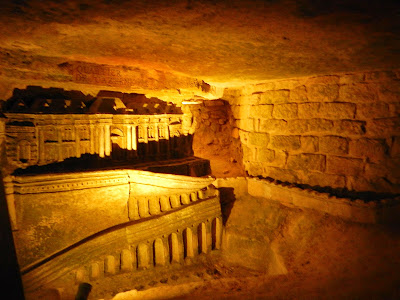 The experience was made much richer with the help of the audioguide. Since we couldn’t read much of the French, we would have pretty much wasted our time if we hadn’t had the guides to listen to.

Emerging from the darkness, famished, we jetted over to the first lunch place we could find and devoured some crepes and cider. We took the scenic walk back to the apartment, detouring through the Jardin du Luxembourg. 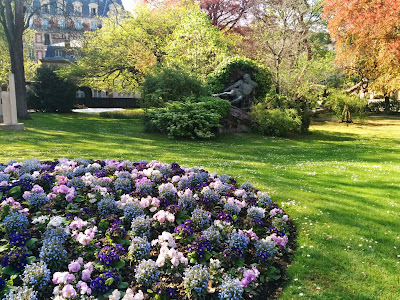 Now, this was a park. A map at the entrance detailed all the different sections and what you could do there: playgrounds for kids, bocce ball for old men, sitting areas, fountains, gardens, and of course, snack stands. There were symbols designating which grass was off limits and which was ok to trample. The park was filled with people, each enjoying the outdoors in their own way. We wandered through the paths, trying to stay in the shade, until we got our fill. If I was staying longer in Paris, this would be a favorite destination on a lazy, sunny afternoon.

The Panthéon was another of France’s National Monuments that seemed worthy of a visit. It was kind of on our way home anyways. The dome was under construction, but even so, it had captured our attention early in the trip. 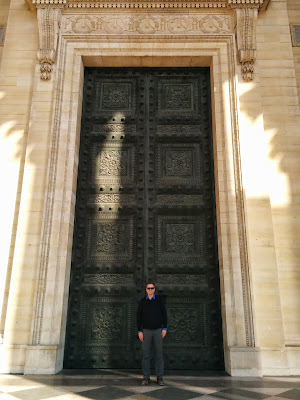 The outside of the structure was impressive, with its grand staircase and huge columns, but the inside was ten times more amazing. I felt really small once I stepped through the door. Built in the Neoclassical style, the Panthéon is shaped like a cross with a massive dome on top. The building stood over 270 feet tall. Gargantuan paintings filled up the walls, bold tile patterns decorated the floor, and detailed stone carvings commanded attention in each room. Click to view a 360° view of the interior. 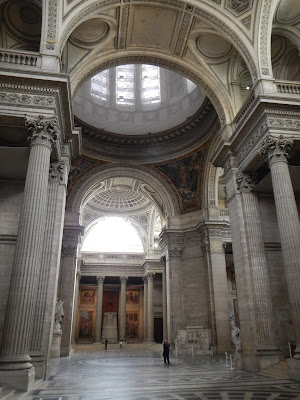 Plaques recalled a time when the Panthéon served as a place for an important experiment: demonstrating the rotation of the Earth by hanging a pendulum from the top of the central dome. Foucault’s Pendulum has since been removed to a museum and a replica was installed here. But, not today, since the dome was under construction.

Lastly, we descended into the crypt beneath the main building. Here lay the bodies of many historical French figures, including Marie and PIerre Curie, Victor Hugo, Louis Braille and Voltaire. Many confusing hallways led from one tomb to the next. Some had fresh flowers or other gifts, some were gated shut, and some had descriptive signage explaining what the person had accomplished to earn their place in the Panthéon.

The next morning, we headed straight for the Louvre. It was a short walk from the apartment, so we arrived before it opened and got in line. The queue standing outside the famous glass pyramid turned out not to be a ticket line, but a security checkpoint allowing us the privilege to go buy tickets. Once we descended into the main atrium, all hell broke loose, with people walking in every which direction and speaking every language known to man. We looked around the confusion until my eyes settled upon a ticket machine. Once we got tickets, we had our choice of several wings to enter. I headed straight for the one with the least people milling around. Whew, we were in.

We started exploring a wing of the museum dedicated to the history of the Louvre. We were mostly alone, looking at old pictures, floor plans, and details of renovations of the building over time. It was fascinating, but not a major draw for tourists. After that, we explored some of the more popular exhibits: Greek Antiquities, European paintings, Asian art. The halls were packed with loud and pushy tourists, all on their cellphones and iPads, shoving in front of me to take a picture of whatever I was looking at, then take off a second later. Was anyone actually looking at anything? I thought, perhaps not. I kept my phone in my bag and instead tried to enjoy the art and artifacts displayed in the museum. 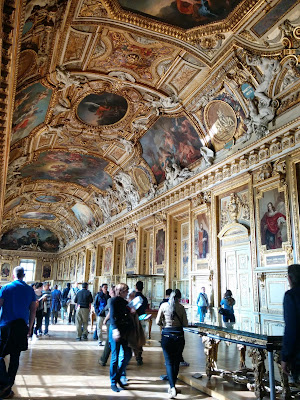 What was maybe more impressive was the museum building itself. Looking up, I saw intricate paintings, decorative wood and stone work, and lavishly decorated rooms. Looking out the windows, views of the building exterior, glass pyramids, fountains, and gardens presented themselves. The Louvre was an extraordinary place, if you only took the time to look.

Later that evening, after walking past the Eiffel Tower, its pulsating mob of tourists and sketchy street folk hawking souvenirs, after a late dinner, and after exhausting our feet with walking, we conjured up enough energy to re-visit the Eiffel Tower after dark.

Paris was a great walking town at night. It was cool but not cold, and bright lights illuminated all the monuments, fountains, churches and statues throughout the city. We wandered towards the tower, admiring its familiar shape jutting over the Paris skyline.

But suddenly, we stopped in our tracks. When the clock hit 10pm, a dazzling light show began. Each light twinkled fast and furious, the entire structure glistening in the night sky. We rushed to find a clearer viewpoint and take some photos. This was an event to remember. The lights flashed on and off for several minutes before settling back to normal, as if nothing had ever happened. The picture does not do it justice; this must be experienced first hand. 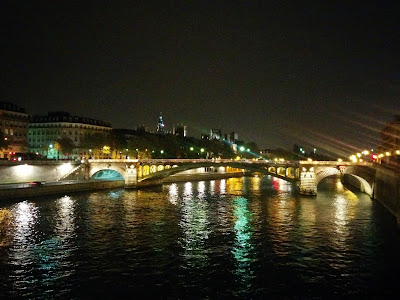 The next couple of days were mostly consumed with MovNat training, which was awesome in its own right.

And my favorite moment in Paris? That Sunday morning when I woke up early to get to my training class by foot. Jogging along the Seine with not another soul in sight, watching the boats floating in the river, breathing in the cool air, feeling the cobblestone under my feet. It was perfect.