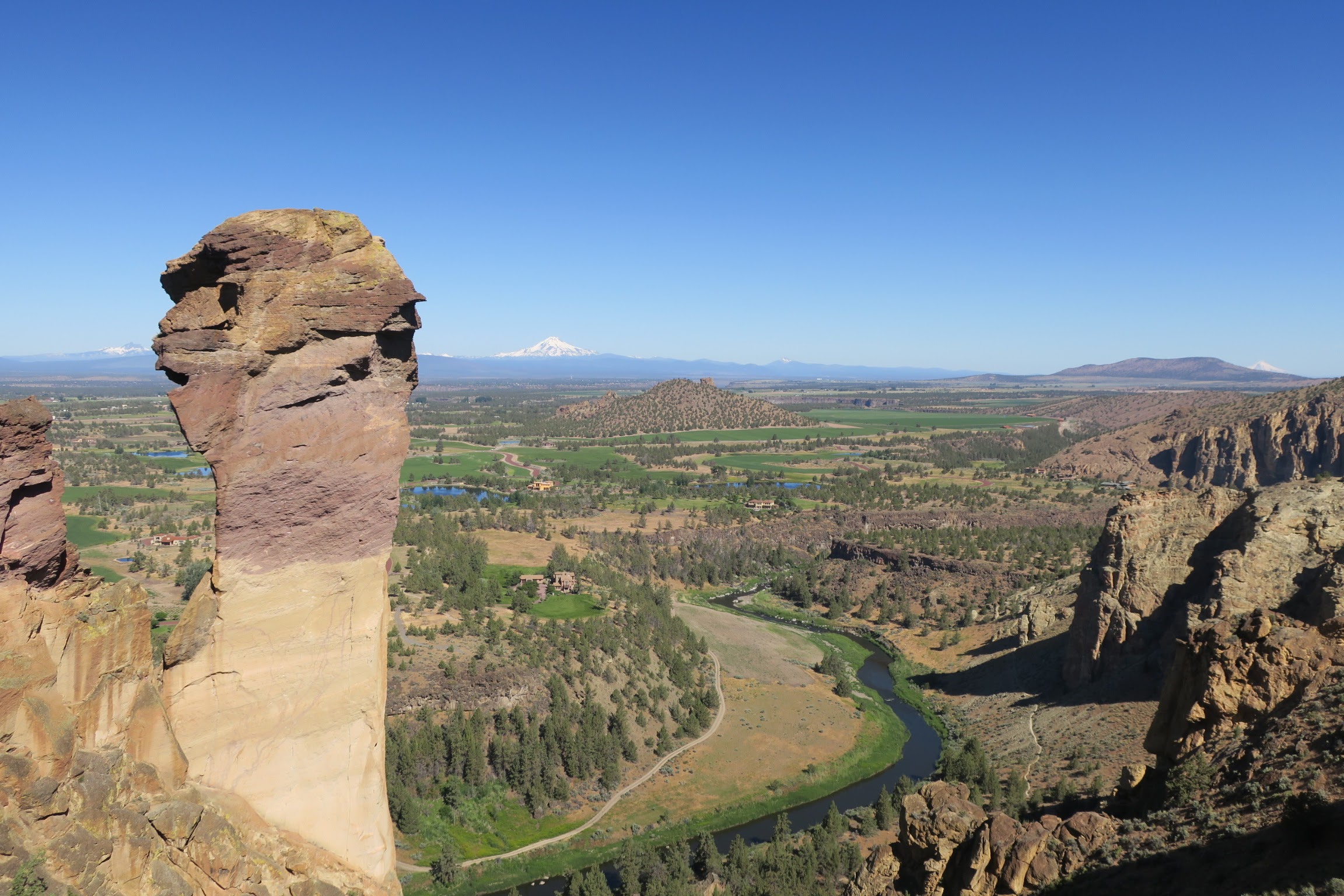 In almost ten years of climbing at Smith Rock, I’d never gotten on Monkey Face. One of the most recognizable features at Smith, Monkey Face is a 350 foot tall spire with multiple climbing routes leading to its summit.  Today, my climbing partner Keen and I decided to go for it.

We hiked up and over Misery Ridge to get to the base of the west face. From here we’d follow West Face Direct (5.8), a 2-pitch trad route that followed a few crack systems to reach a large ledge. I geared up for the first lead. 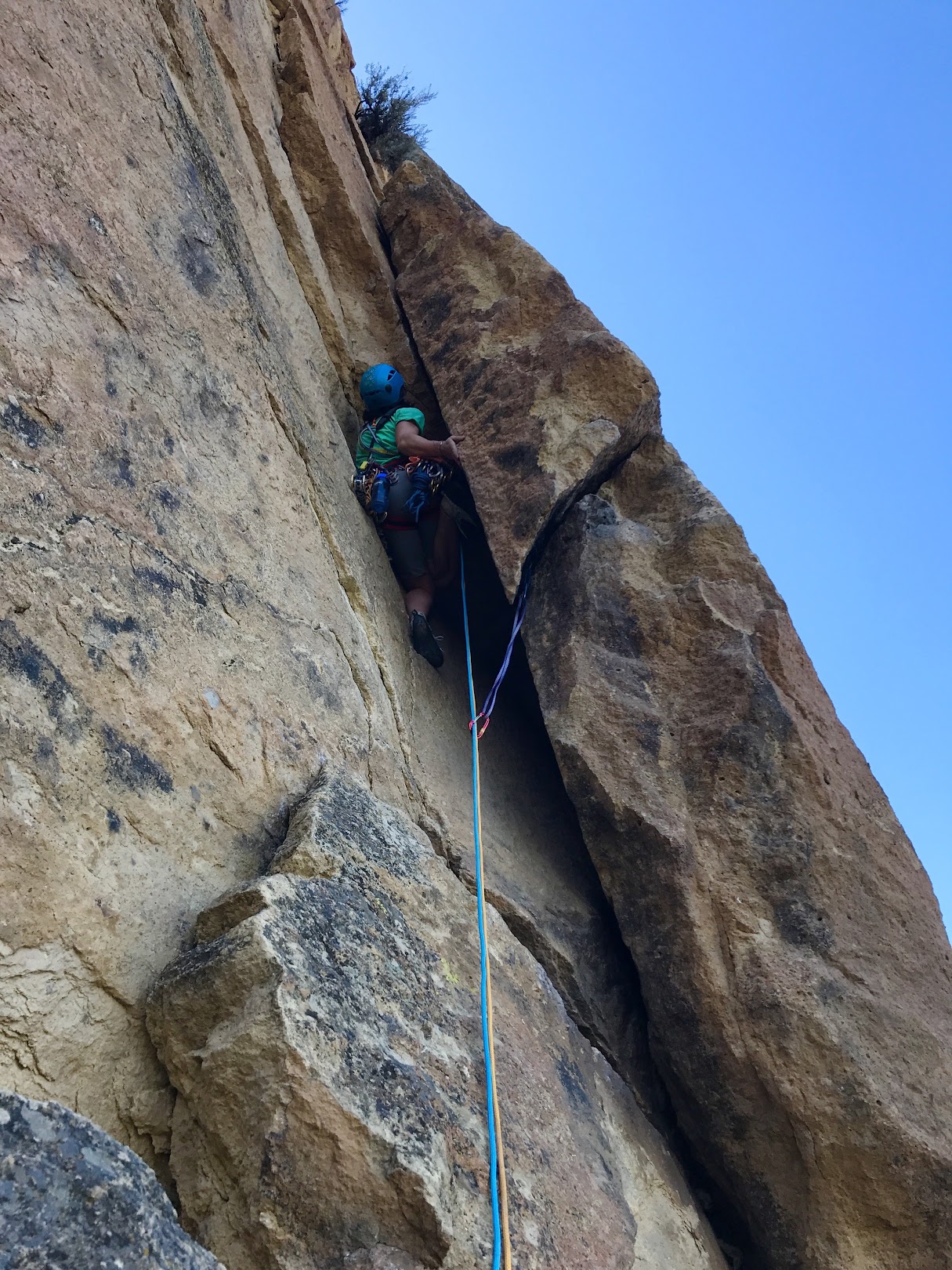 Still brushing off the cobwebs after several years of climbing little to no trad, I struggled to get past the first 20 feet or so, wriggling up an awkward chimney. Eventually I figured it out and got up to some easier climbing. But since I’d loaded up the crack with several pieces of gear, I had heinous rope drag that prevented me from climbing further. I set a piece and downclimbed back to the top of the hard section to clean a few pieces and help the rope move freely. Then I climbed back up and finished the pitch. 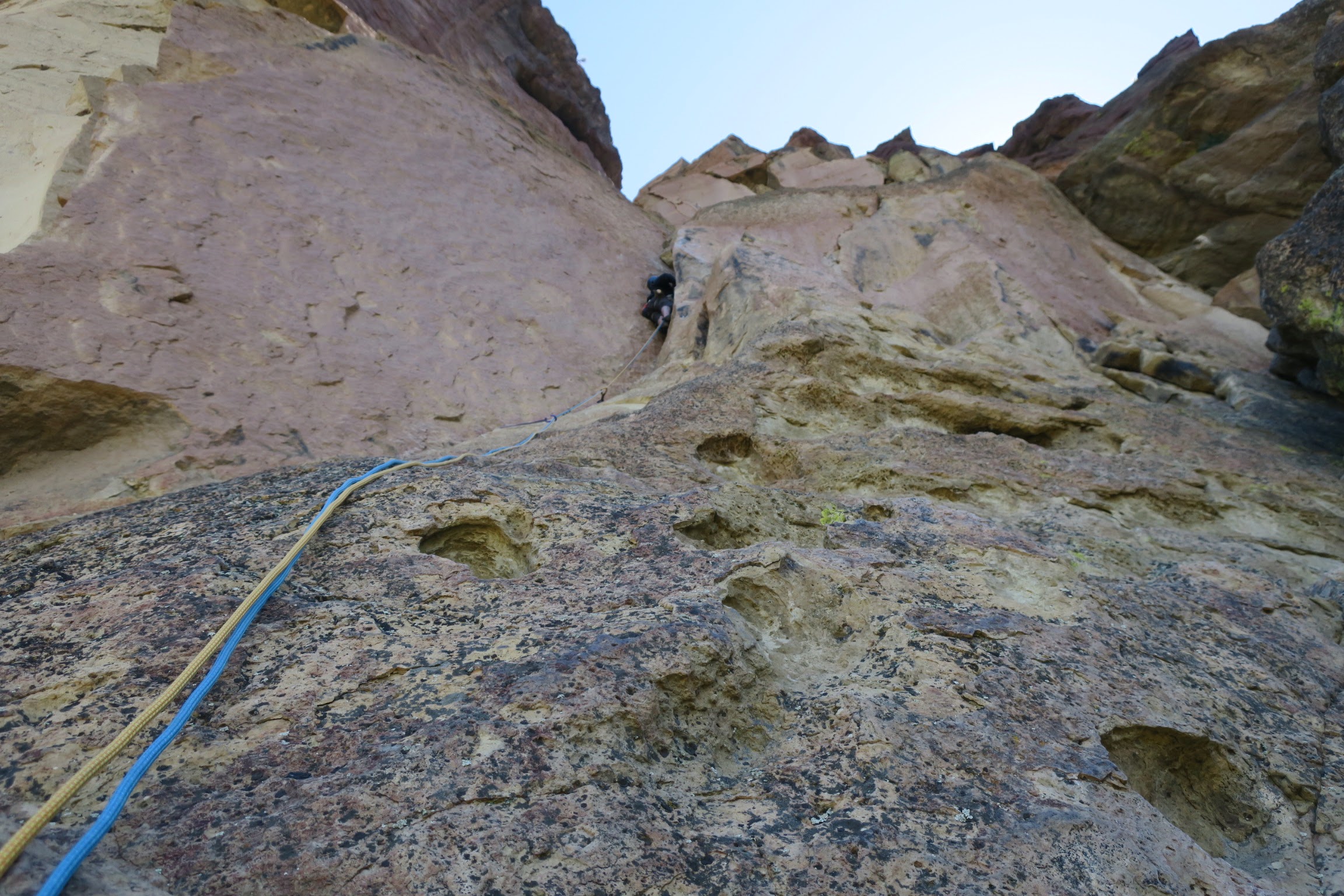 From my nice belay ledge, I belayed my partner up, traded gear, and he set out on the second lead. I watched him climb across a sloping ramp with lots of huecos to a crack/dihedral that disappeared out of sight. Once he finished, I followed the second pitch up to Bohn Street, where we’d sort out gear for the famous bolt ladder. 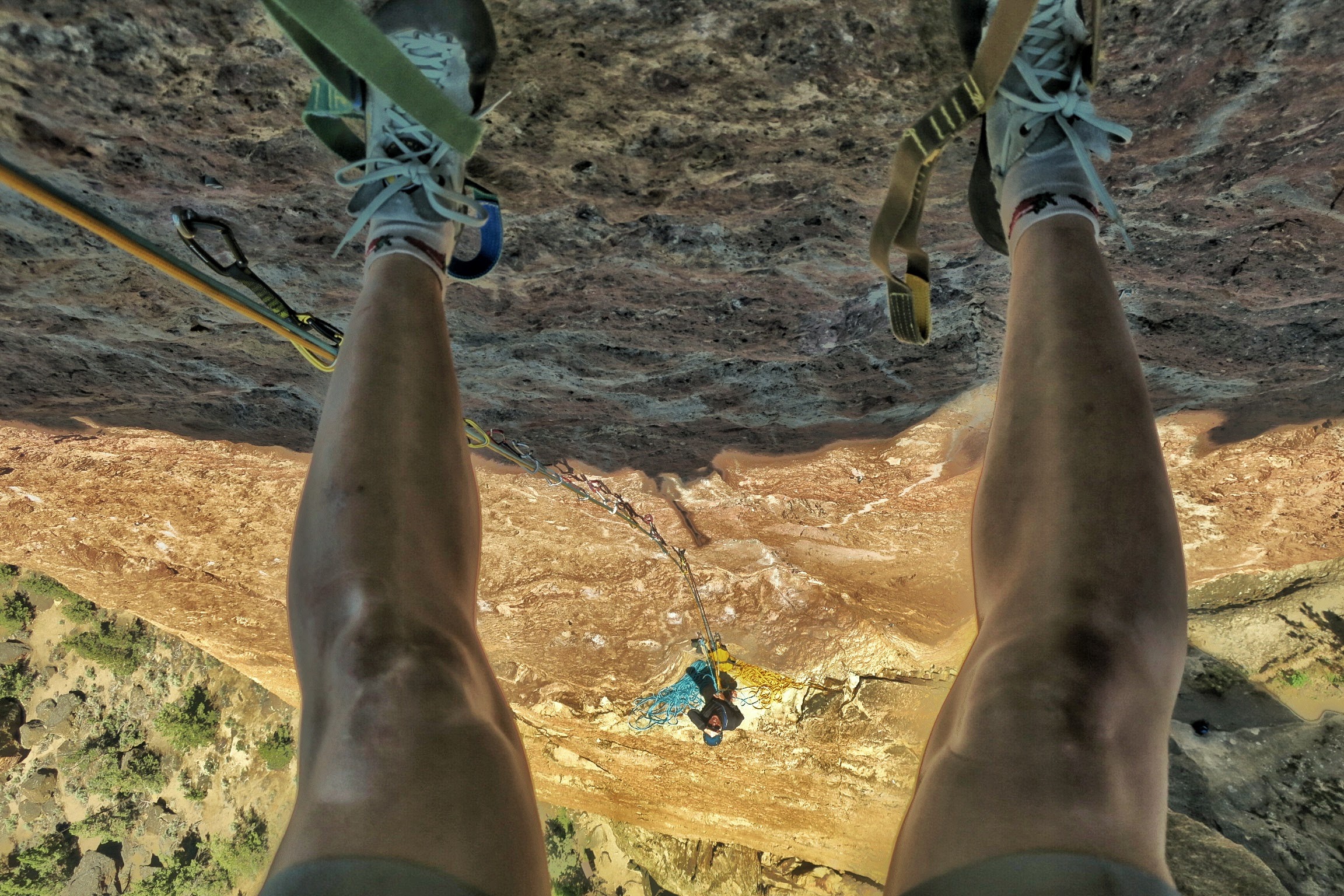 Keen had done tons of aid climbing but I had done effectively zero. So I watched a few videos on aid technique and he talked me through the first few clips. Then, I was on my way. I learned that aid climbing was all about getting into a routine and moving methodically. This was easy aid: I had no pieces to place, I just had to clip bolts. The only difficulty was in the bolts that were reachy for me, and also getting over the lip into the cave. There was a lot of yanking on gear, which I am not used to doing, and it was actually much more strenuous than I’d imagined. It was an awesome learning experience and it was fun to problem-solve and get up in the cave. 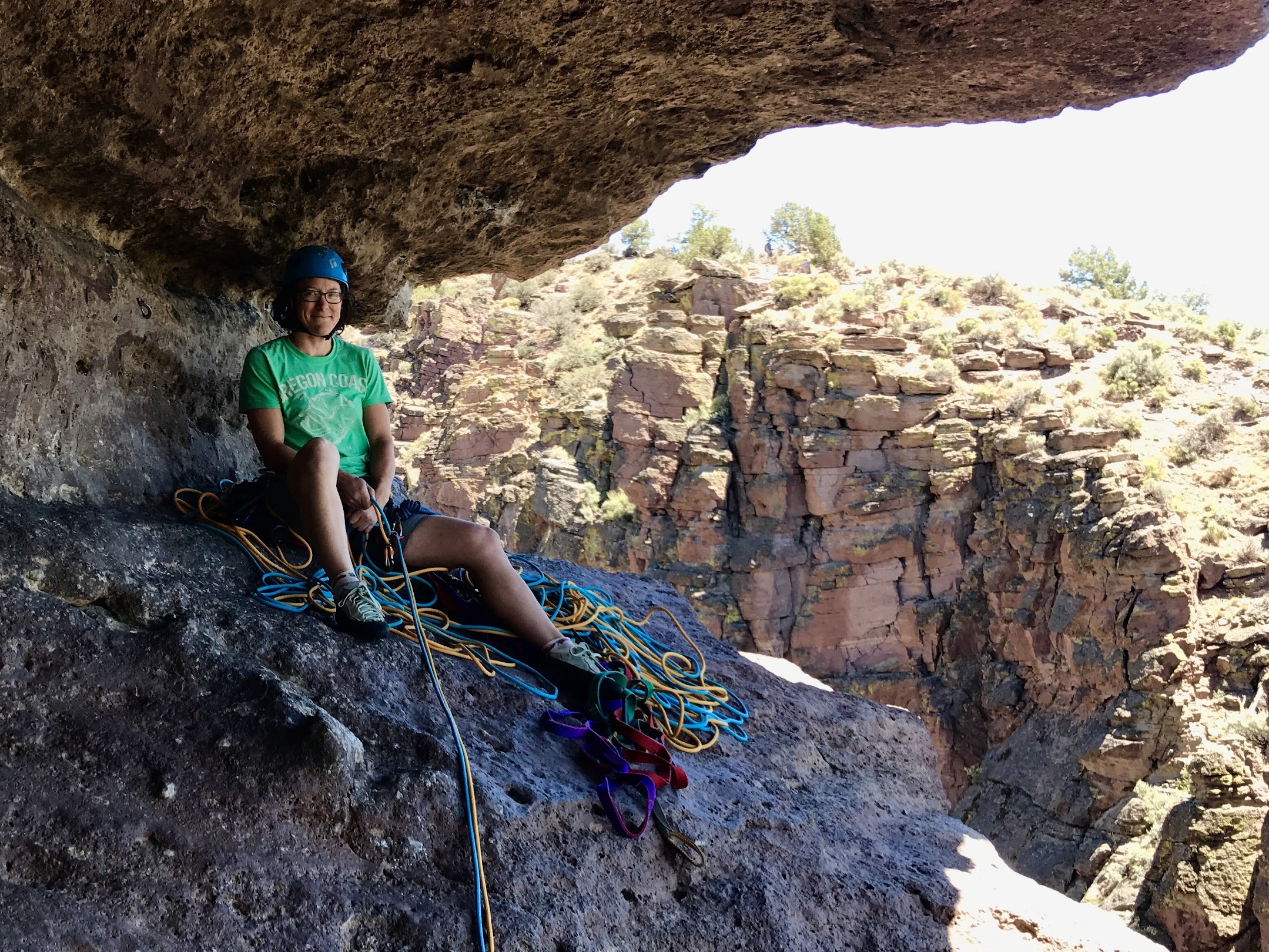 Once we were both securely in the cave we sorted gear again. Keen needed some quickdraws for the final 5.9 pitch to the summit. Everything else went in the backpack, which I would carry up with me. 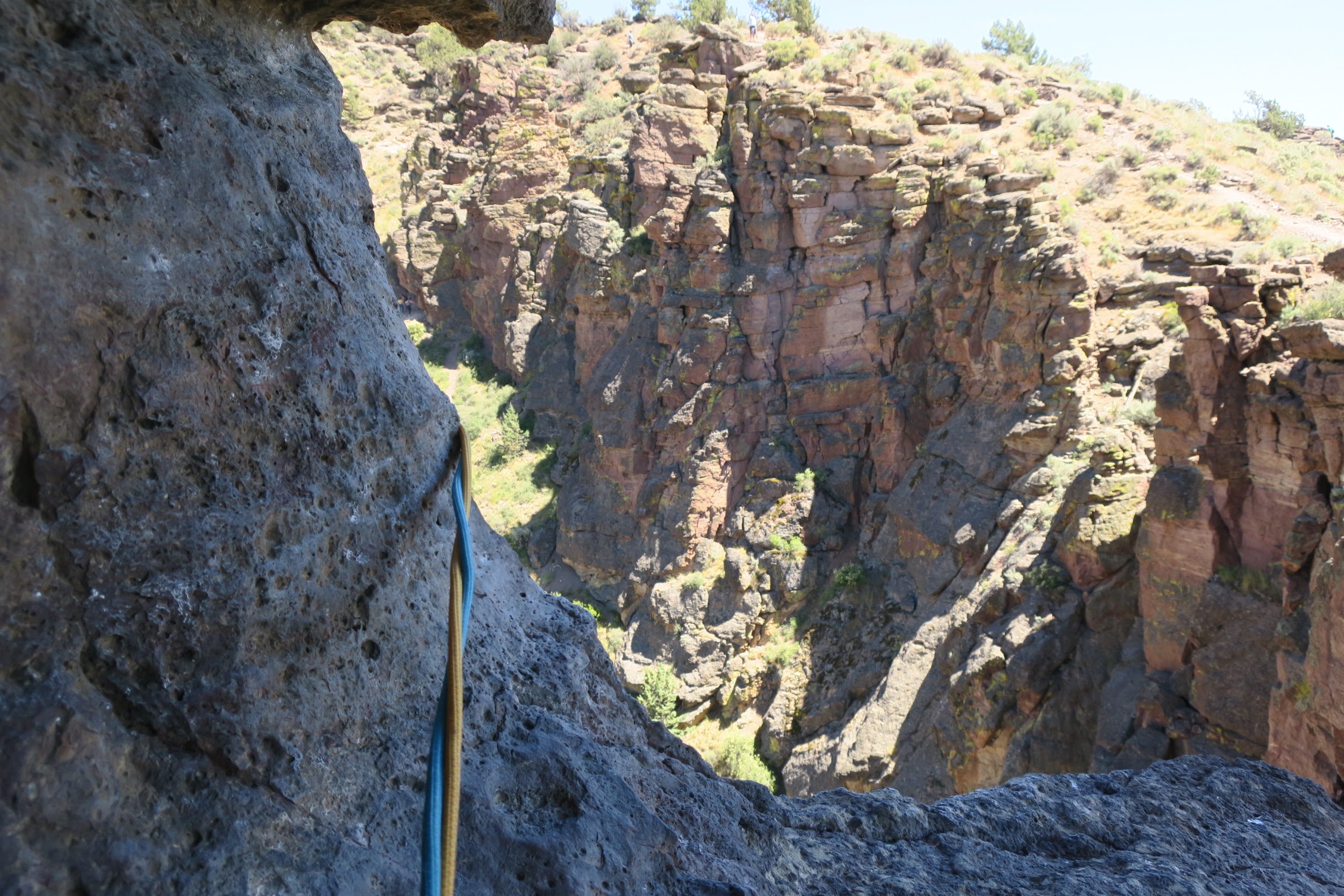 The exit of the cave is called Panic Point, and for good reason. You’ve got to step out of the cozy cave onto the face of the rock, with nothing but air below your feet. There are good handholds and foot placements, so most climbers are capable of doing this route. While it is technically moderate, it is mentally challenging. Here, the wind blows, you’re fatigued, excited, and totally exposed. Hikers watch in awe from the trails all around you. And, I had a backpack constantly trying to pull me off the wall into the void.

Lucky for me, my partner led the route so I was on toprope. I fought my way up the last pitch and was delighted to reach the belay station. I scrambled up to the summit, took the pack off, and enjoyed the endless views from on top. One of the ladies on the trail nearby yelled “woooo!” and threw up her arms in excitement, as if to say “nice job, you made it!” That was cool. 🙂 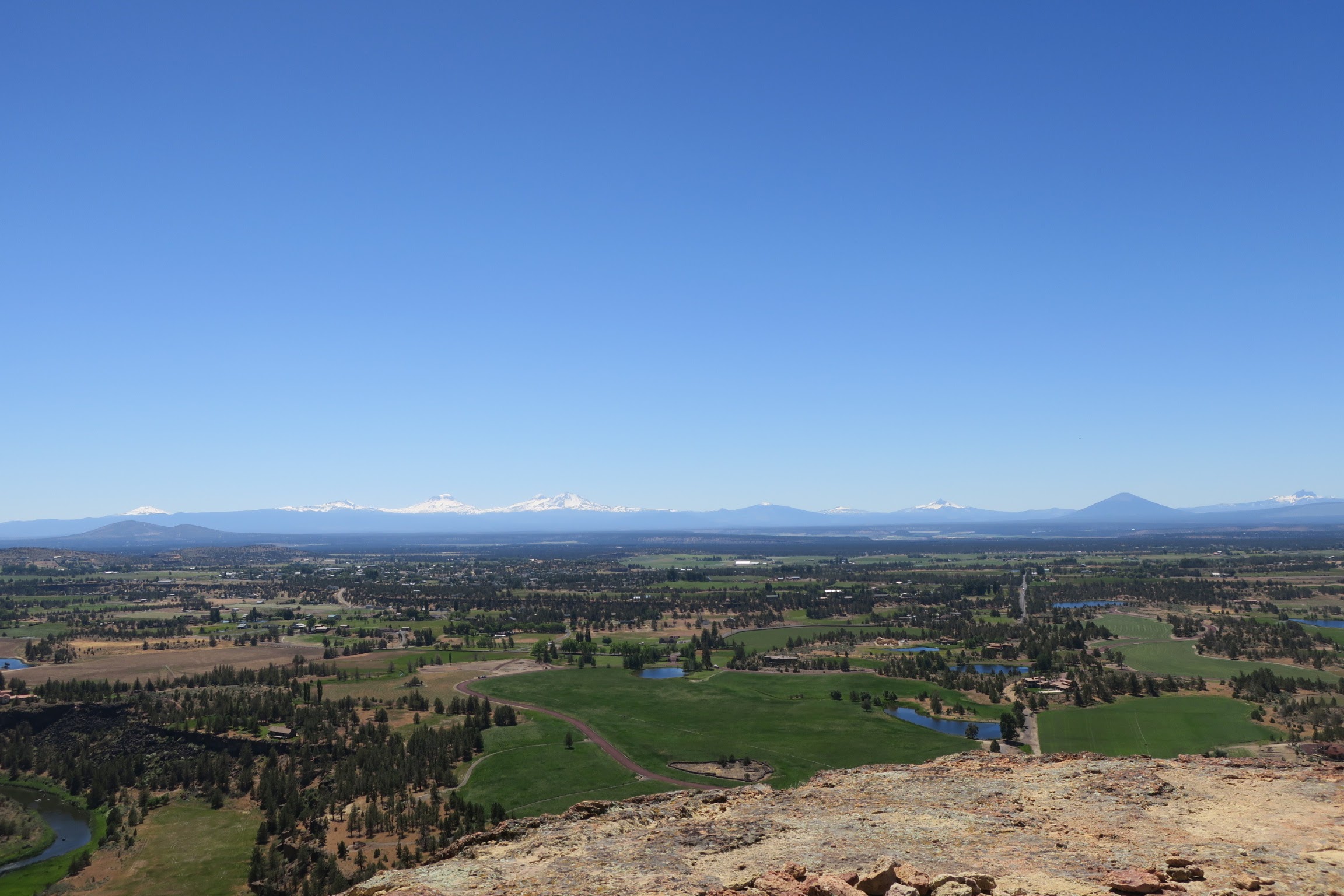 But the climb wasn’t over yet. We still had to get down. At the rappel station, we carefully tied our two ropes together and I set up the first rappel. After the first section, the rock became overhanging, leaving me dangling a couple hundred feet off the ground. The wind pushed me in a gentle spiral and I took in the 360-degree views all around me. What a fun ride down! I landed as another pair of climbers was heading up the Pioneer Route, then my partner descended to the ground. 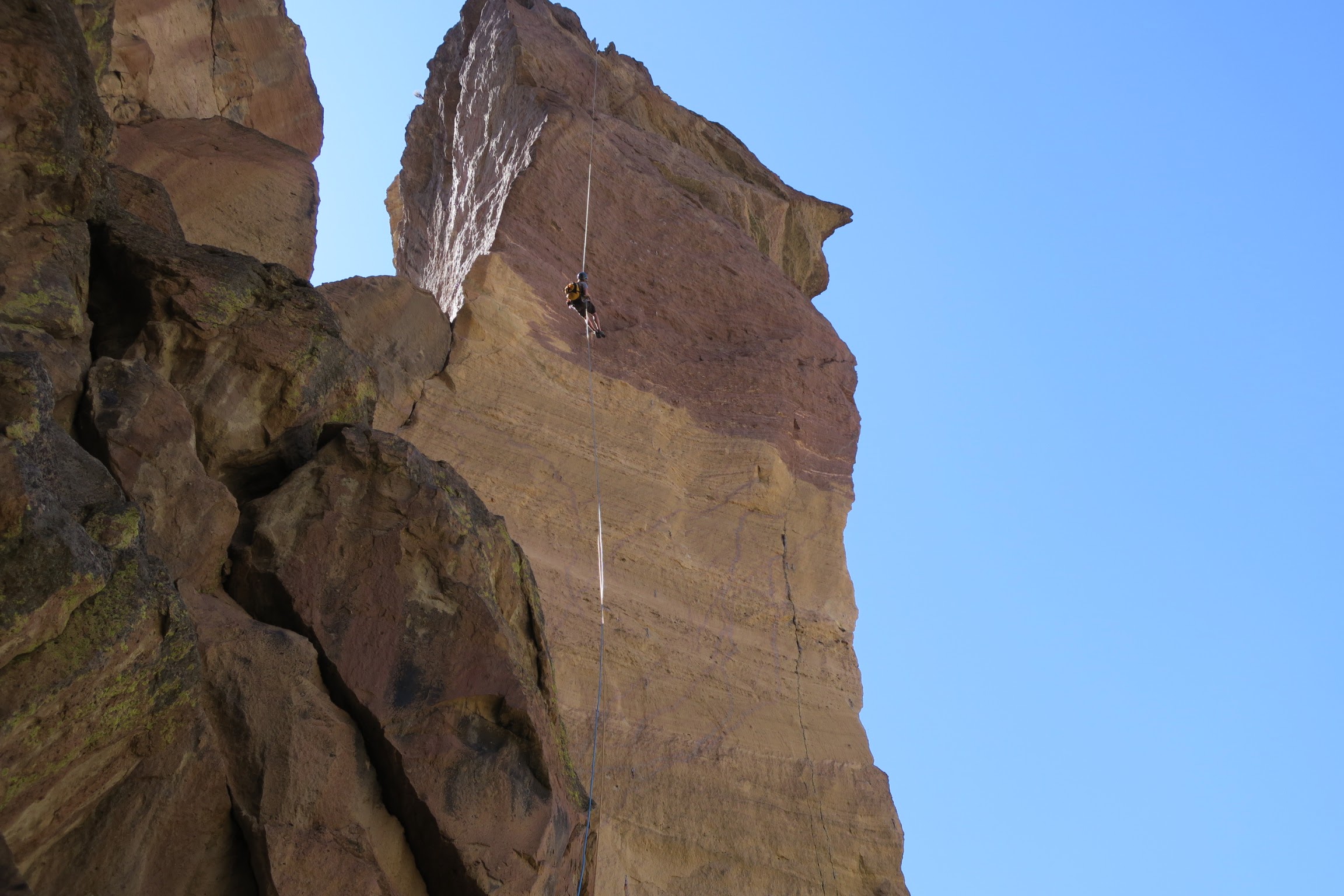 We walked around to the base of the route and sorted gear in the shade. While most of our climb was in the shadow of the towering rocks, our hike out would almost entirely be in the sun. On a hot day like today, the sun can drain the energy right out of you.

We took the long way back along the river. The Crooked River flowed by swiftly. The vegetation on either side of the river looked impossibly lush and green. We stopped a few times to look back at the Monkey and watch the other party make their way up towards the top. Along the hike, we saw several different varieties of wildflowers and shrubs. Several people were out hiking today, which was crazy considering the high temperature and the fact that it was a weekday. Smith Rock is popular almost any day, any time, no matter what the conditions are. 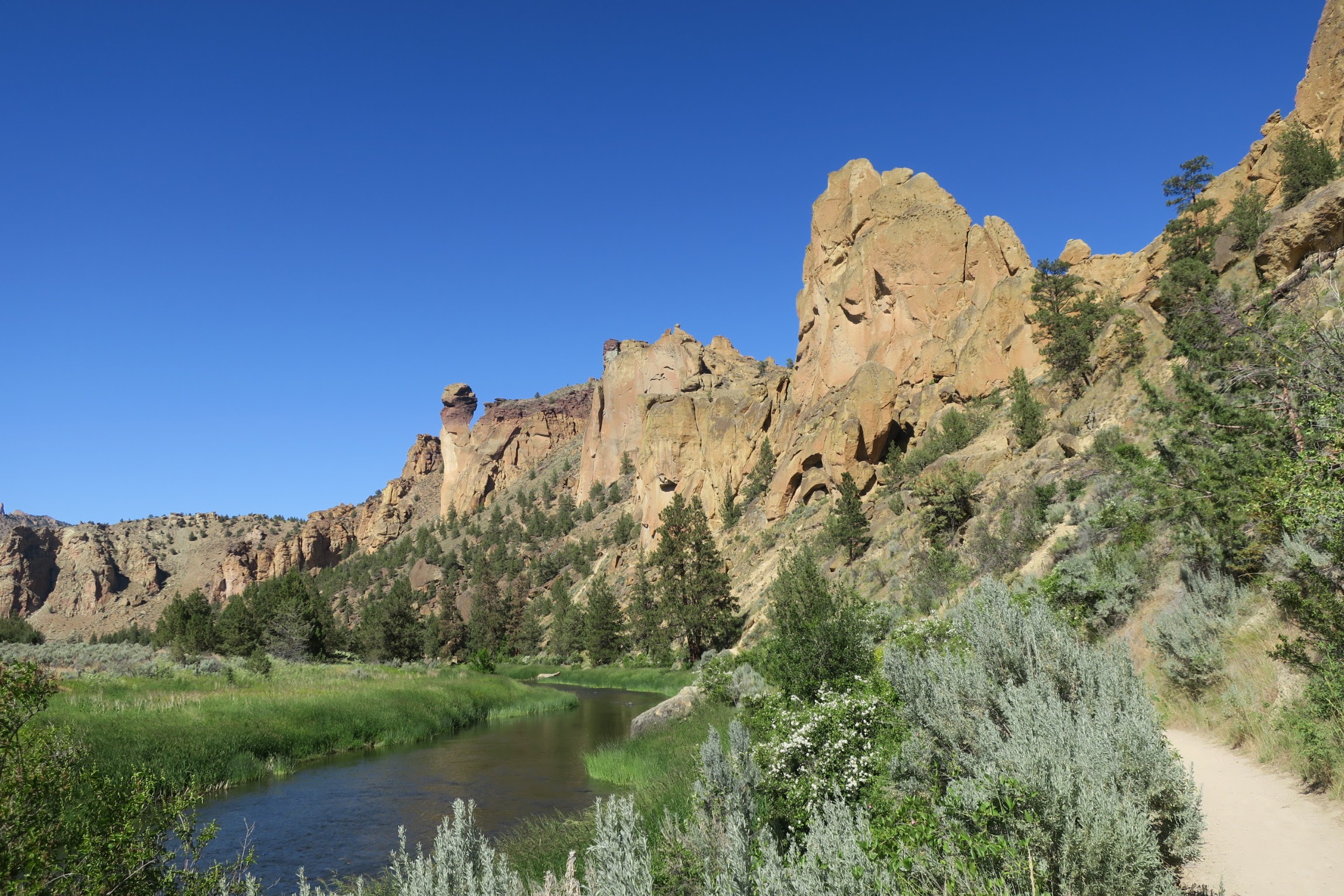 I was happy to have completed a climb on Monkey Face, finally… The route was varied, enjoyable, and just challenging enough. It required a wide range of skills: traditional, sport, aid, and multipitch climbing all rolled into one experience.