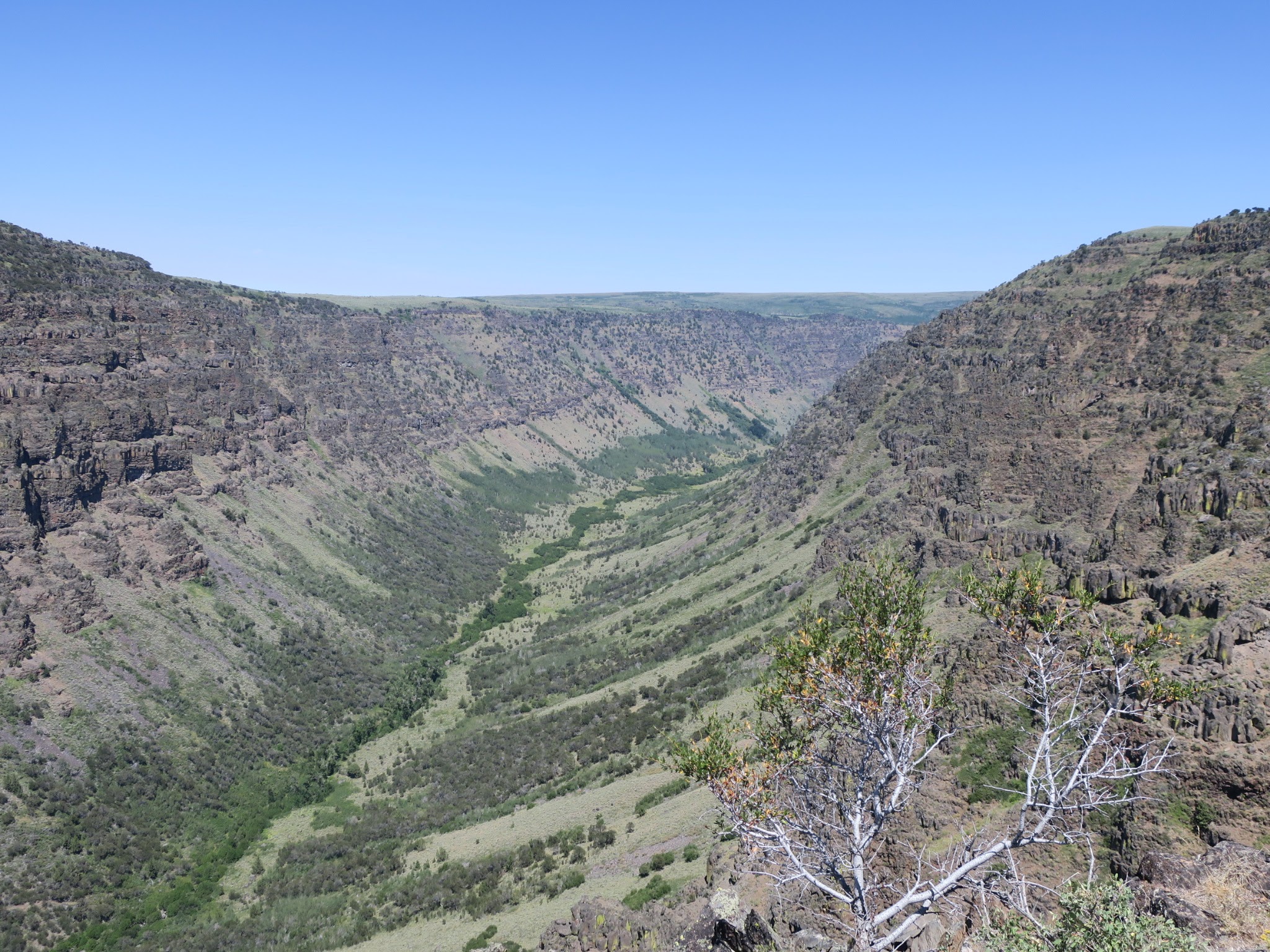 I’ve had the Steens Mountain on my mind since the first time I stepped foot into the region. Literally, one foot. I had just undergone ACL reconstruction surgery 3 weeks prior to my first visit. Needless to say, I couldn’t walk very far. So I spent my days wistfully looking up the mountain and dreaming of the day I could stand on its summit. Since then I’d taken a few trips to the area, but always in winter. During those winter trips, snow blocked entry to most of the vast mountain wilderness, leaving me to explore only the low canyons and streams.

We drove from Bend to Frenchglen on a Friday afternoon. From Frenchglen we started up the south side of the Steens Loop Road, hoping to score a campite at South Steens campground. Luckily it was hardly even half-full, so we were able to get a shady site near a dry creekbed.

After a satisfying camp breakfast we headed for the Big Indian Gorge trailhead, located at the east edge of the campground. We walked through what Sullivan called a “juniper woodland” for nearly 2 miles. It felt, however, like an open, African plain. The sun drilled deep down into my soul as we trudged along in search of this canyon. Eventually, the trail entered a small, shady grove near Big Indian Creek. The water was low and easy to cross in Crocs. 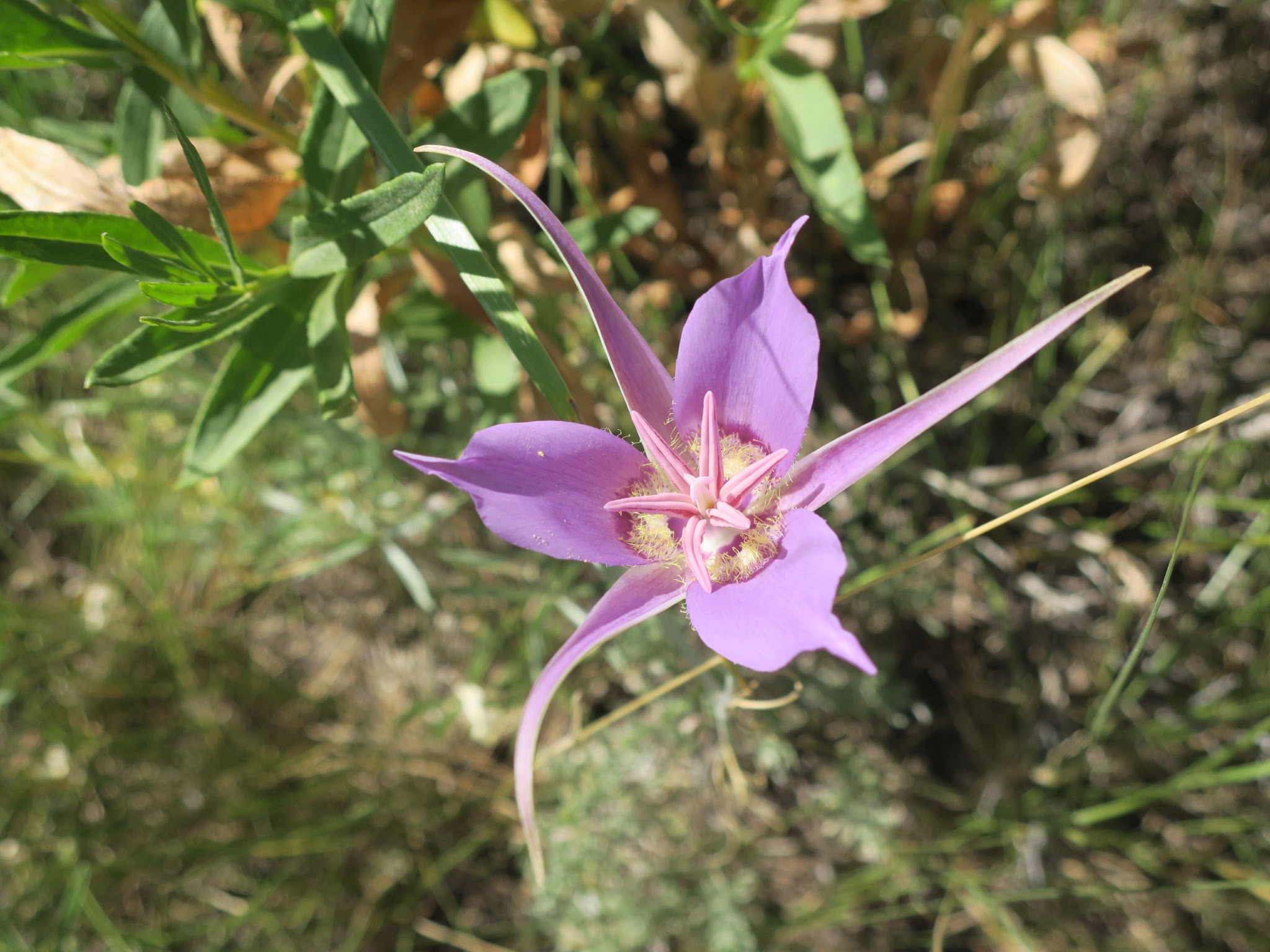 Several miles later, after walking through dry brush in the blazing sun, I decided I just wasn’t feeling it. Apart from the stunning Mariposa lilies, there was nothing special about this hike. It wasn’t what I wanted out of the Steens. We could have been anywhere. There was no perspective, no feeling of being up high. We took a rest break and re-fueled for the walk back. It was time for plan B.

Back at the car, we hit the road and drove up the narrow, winding switchbacks towards the summit parking area. Along the way, we stopped at a few roadside pull-outs that began to make me feel like we were at the Steens. These epic viewpoints provided a broader overview of this special landscape. We could clearly see the large, U-shaped glacial valleys that were carved by ice millions of years ago. It was dramatic. 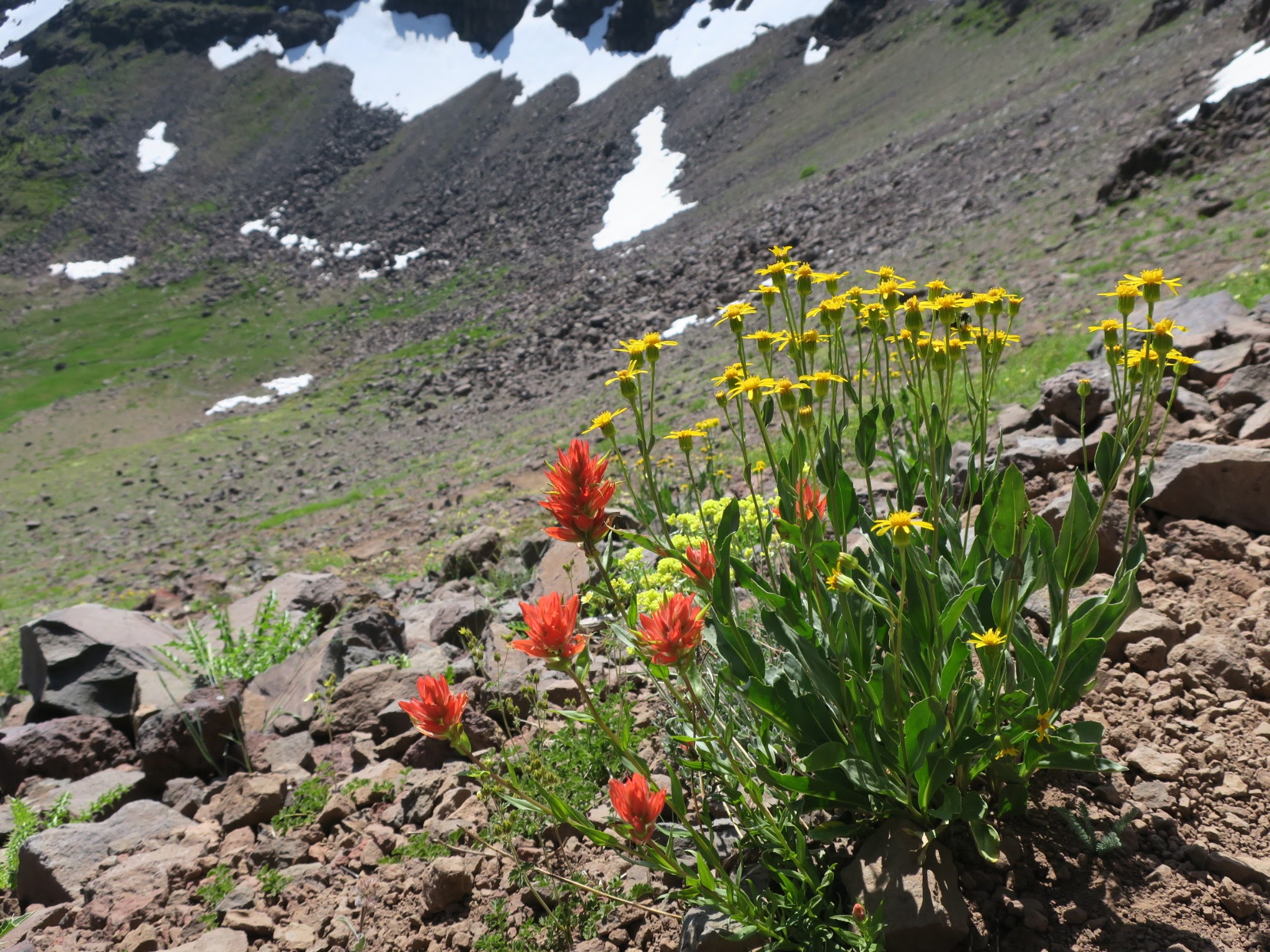 Around 3:30, we set off from the summit parking area to Wildhorse Lake. This short, steep trail followed a zigzag of switchbacks down a hillside to a pretty lake basin. The hills were painted with a surprising variety of wildflowers: buckwheat, paintbrush, thistle, penstemon, clover and many more I couldn’t identify.

We took our time ambling down the trail, trying to capture photos of all the delicate alpine flowers. As we approached the lake, we noticed patches of monkeyflower, which likes to grow in moist ground. Then, tall stands of false hellebore with another surprise: it was flowering! I’d never seen this distinctive plant in flower before. 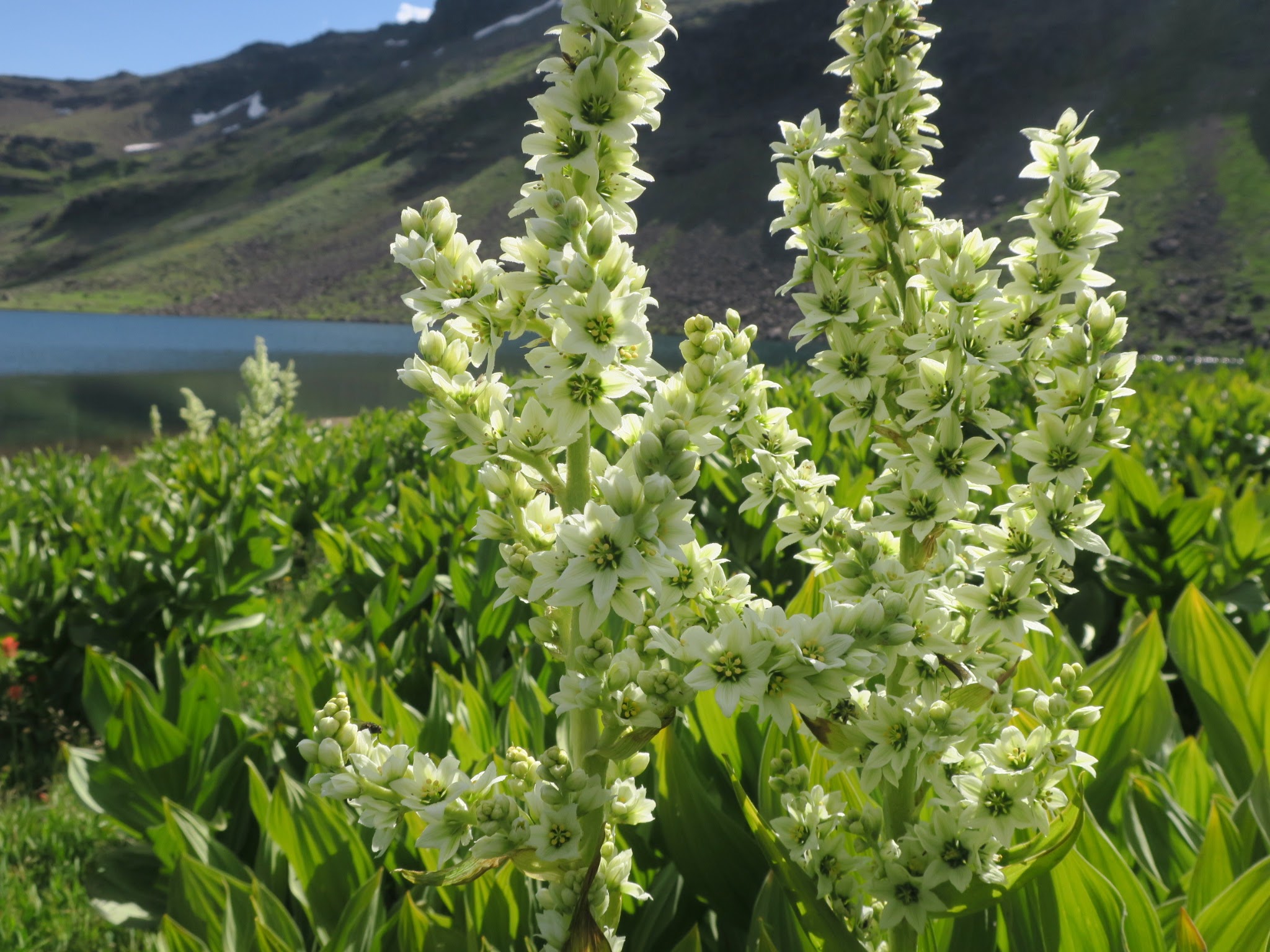 Once we reached the lake, we found a small, sandy beach. The water was cold, but it felt so good to jump in and wash off the grime and sweat. We killed some time here just enjoying the gentle breeze, pretty flowers and sunshine glistening off the lake. Up next we’d have a grueling bushwhack up the south side of the mountain. 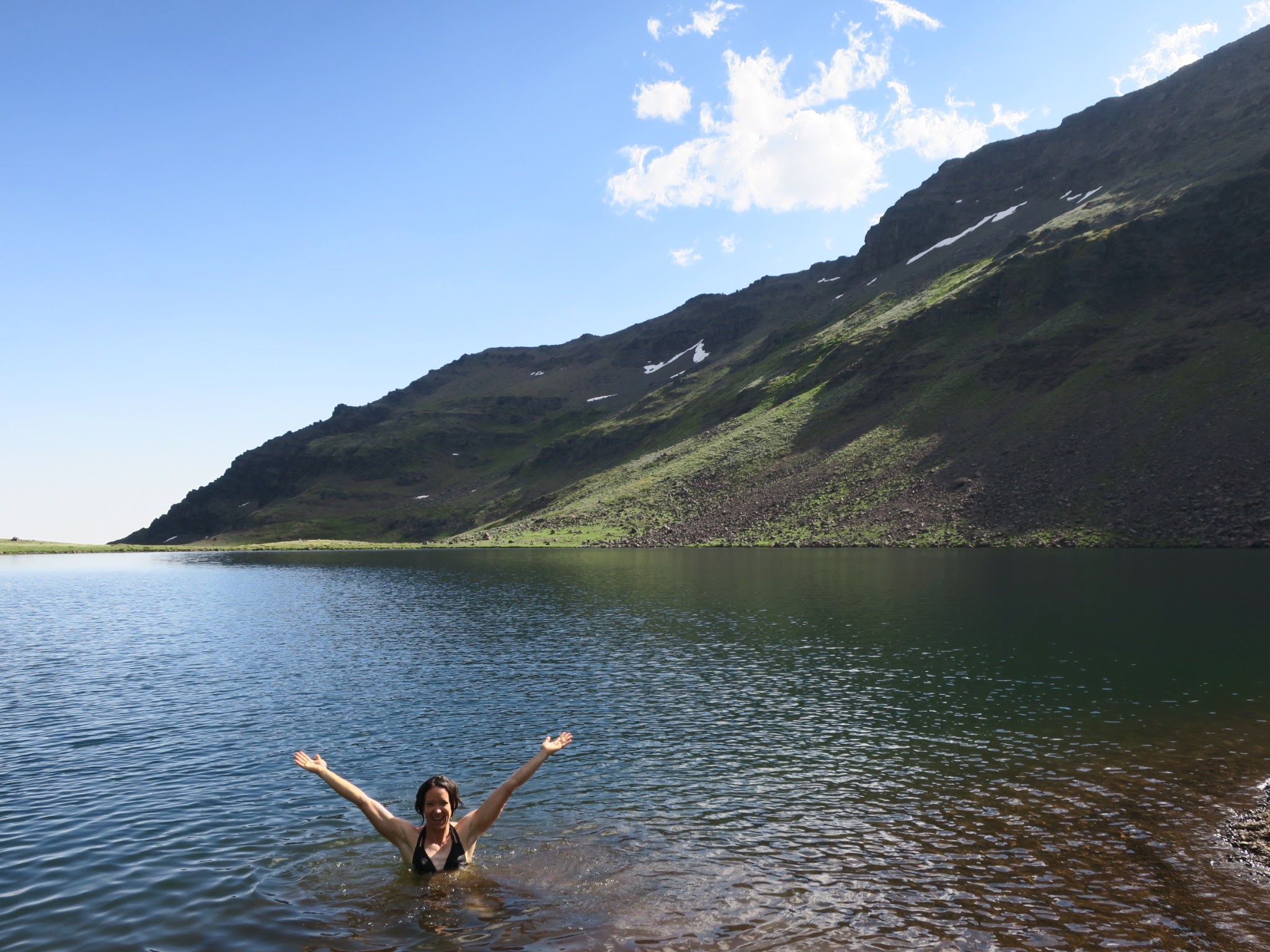 Our route took us along the bubbling creek streaming out of the snowfield that was still clinging to the upper mountain. We began by pushing through thick vegetation, which quickly diminished as we climbed higher. Scrambling up the slippery rocks and scree we made our way to the base of the summit. The cliffs looked impenetrable from a distance but we found an easy way to get all the way up. We stood below the radio towers at the top and looked over the rim to the desert below. A quick and easy 0.4 mile road walk brought us back to the car. 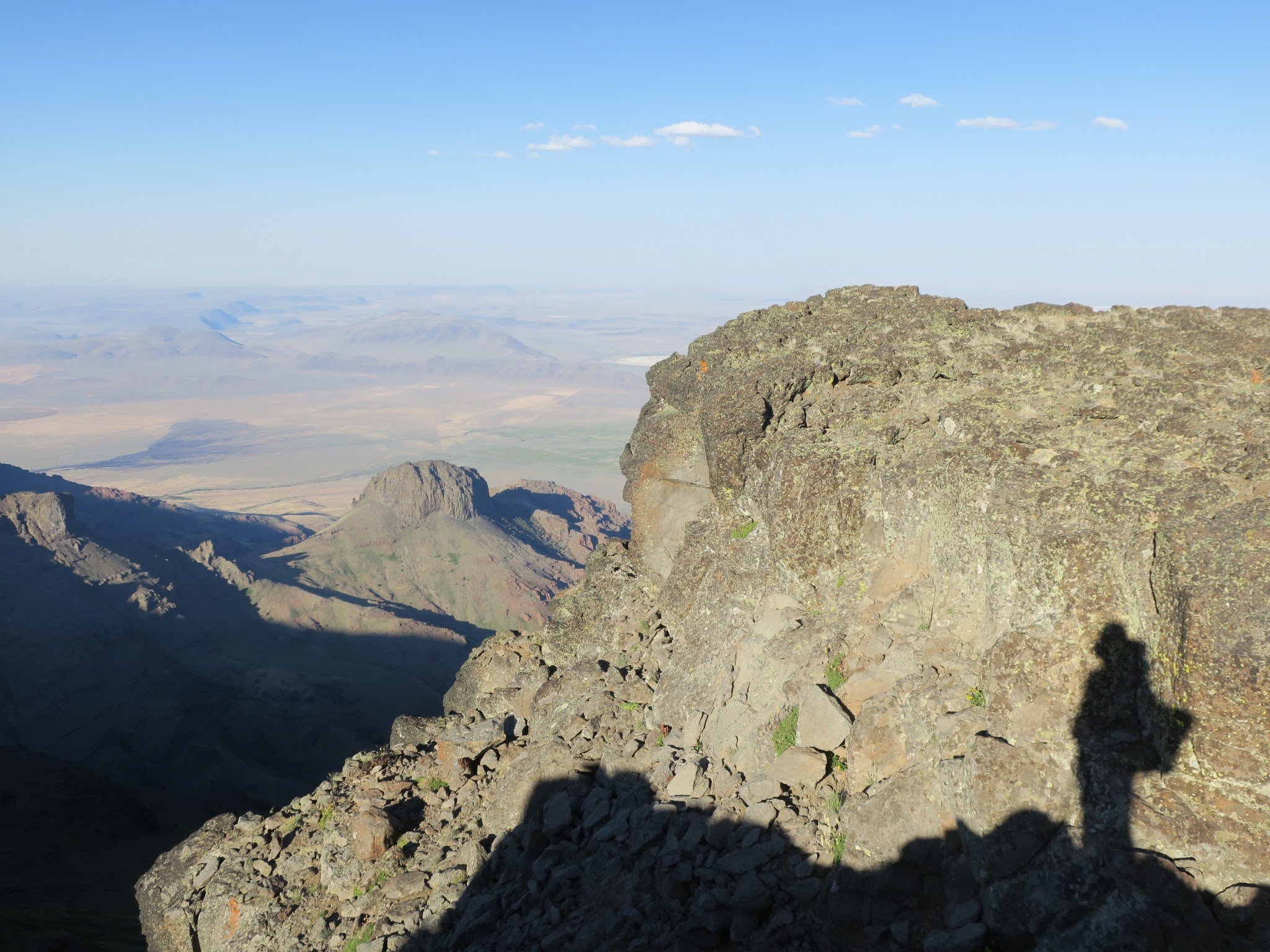 I didn’t want to leave this alpine paradise. On our way to the summit we’d scouted a few possible camp locations and so we drove back to our first choice. With a few gear shuttles from the car we set up a sweet campsite on a flat, gravel patch that was surrounded by boulders, meadows and snow. The sunset was spectacular. We ate chicken and veggies cooked on the camp stove, played ice cream soccer, and sunk into the tent for a well-deserved night of rest. 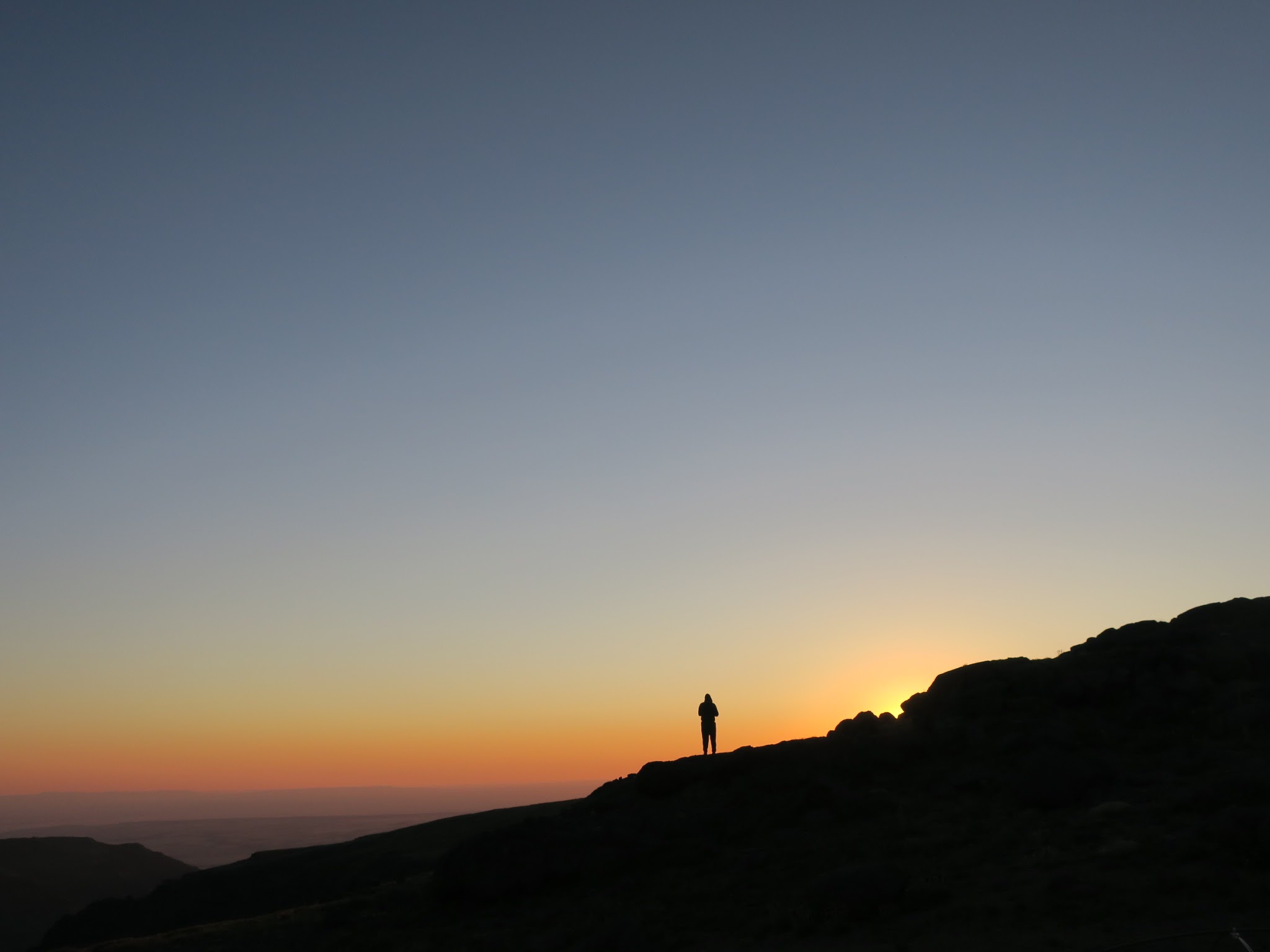 We packed up camp and headed off on some cross-country rambles. Our travels covered less than 4 miles, but I felt like we were transported to another universe. Walking across high alpine meadows, crossing snow-melt streams and scrambling over gravelly lava rock, we were explorers. Our journey consisted of arriving at one jaw-dropping viewpoint after another. Along the way, we found new wildflowers that I hadn’t seen at Wildhorse Lake: alpine marsh-marigold, Oregon campion, orange hawkweed and so many more. 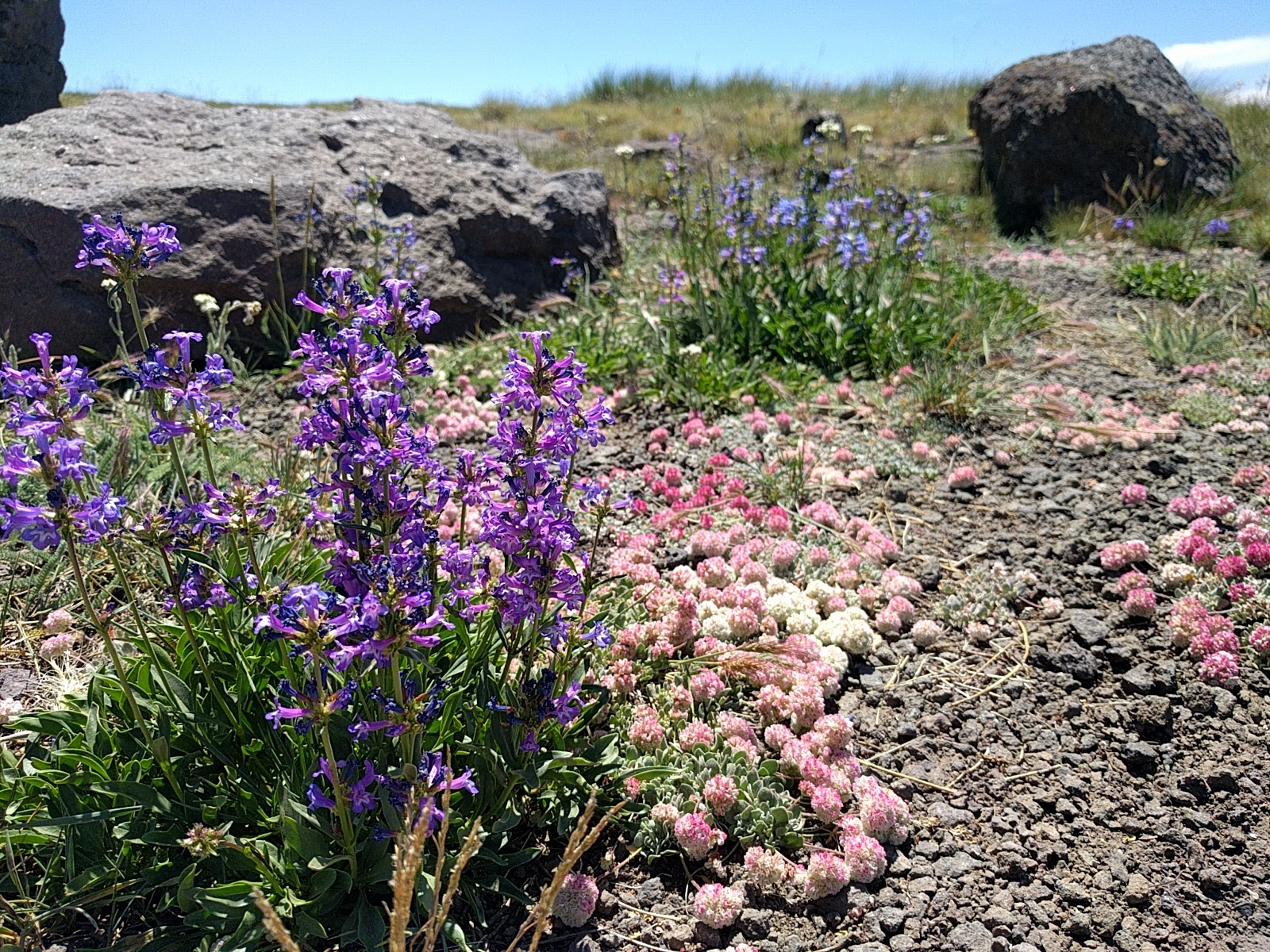 The Steens just screams for exploration. There are only a handful of trails that span this massive wilderness landscape. It would take many, many trips to even begin to see what this mountain has to offer. With 7 huge gorges, several high alpine ridgelines and numerous smaller canyons and gorges, you could wander around here for a lifetime and still not know it all. While I am grateful that we did some backcountry hiking on this trip, I am now hungry to get deeper into the mountain’s secret spaces. 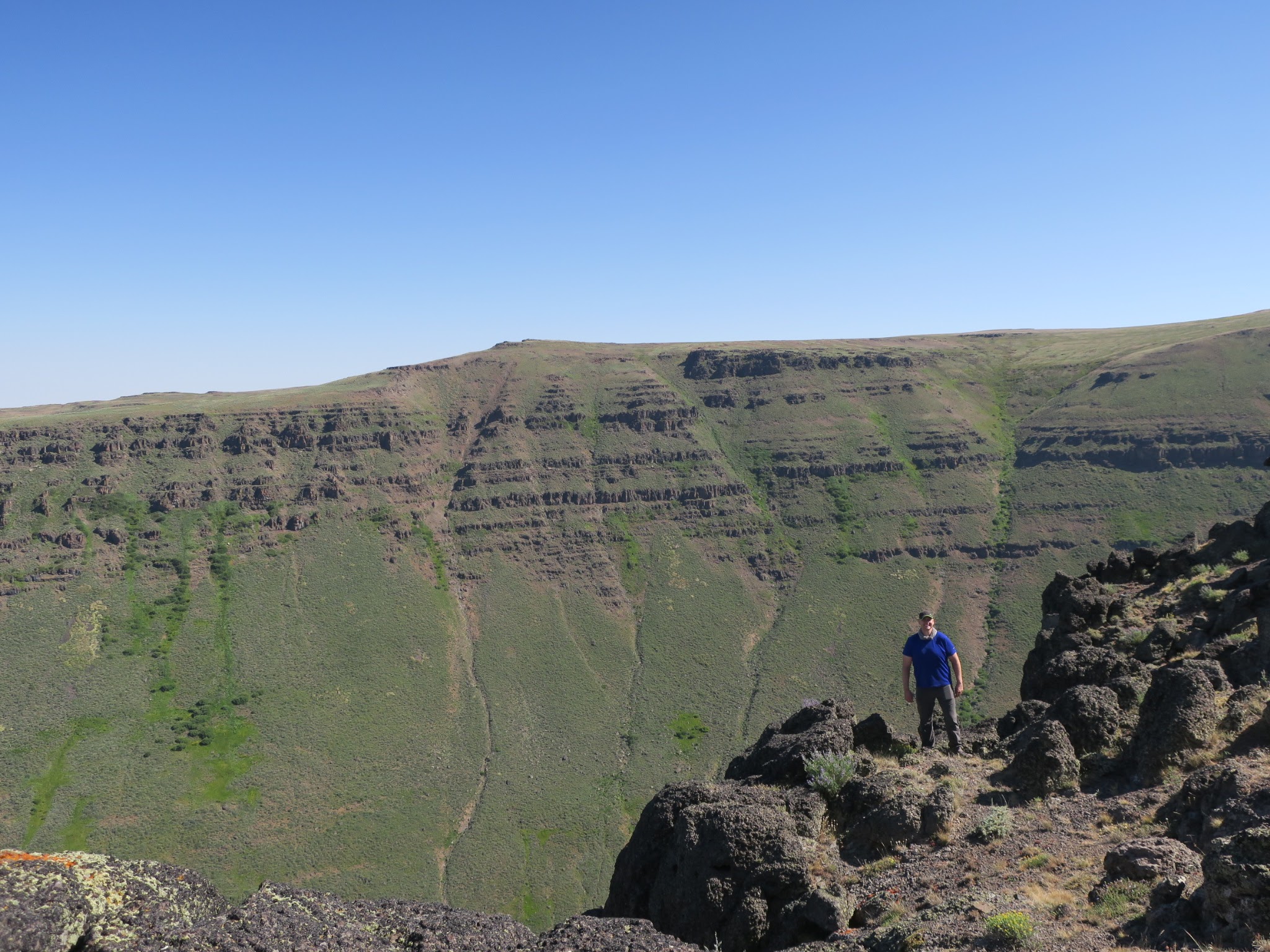 On the drive down, we stopped anywhere that looked interesting: two more viewpoints (that were much prettier than the summit itself), a couple of campgrounds and random pullouts overlooking impossibly beautiful wildflower meadows. The whole trip was a delight for all the senses, from the fresh mountain air to the colorful blooms, cold snow melt and textured rock. After ten years in Oregon I am still finding surprises tucked in every corner of the state.