Photos from the trip | Video 360 from the summit ridge 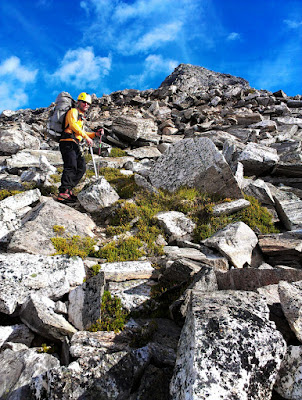 It has been said that Luna Peak has one of the best views in the North Cascades. But few people ever experience this view because of the rugged, long approach and lack of technical objectives. It takes a seriously determined person to put in that much work to get someplace without a mind-blowing rock or ice climb to top off the effort. I was one of seven such people who set out to ascend Luna Peak on this trip.

It all began at the Ross Dam Trailhead, which was packed with cars. The Ross Lake National Recreation Area is a playground for hikers, backpackers, fishermen, canoers and kayakers. There’s resort accommodations, lakeside, boat-in camping and backcountry camping. At the parking lot, we laced up our boots for a quick 1-mile downhill jaunt to the lakeshore, where we’d pick up a water taxi that would take us across the lake.

The boat ride was short but exhilarating. We sped across the clear, blue lake and exited the boat when it reached the other side. From here, our team of seven set off on the ten mile hike to Luna Camp. 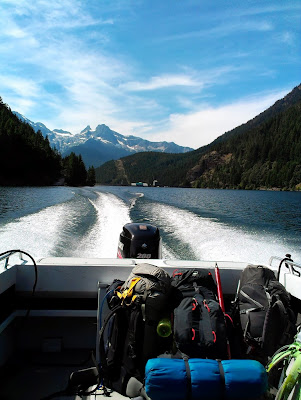 The walk along Big Beaver Trail was lovely. The trail was relatively flat, with small, rolling rises and dips. We meandered beneath giant cedar trees as the path traveled further and further from Ross Lake. It took all afternoon to get to our camp. Feeling heavy under the weight of my overnight pack—my first of the year—I plodded along slowly. I was thrilled to arrive at Luna Camp, where I dropped my backpack and decided which dinner meal was the heaviest one. That’s what I’d eat tonight. 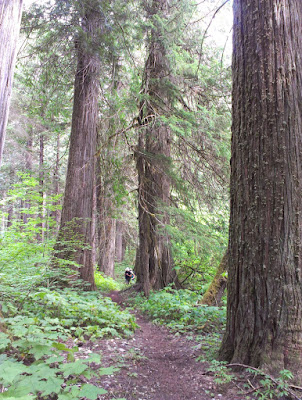 Day one turned out to be a walk in the park. The next day, we walked about a mile and a half further up Big Beaver Trail to a cairn marking the start of the bushwhack. Off we headed, into the brush, to find a way to cross Big Beaver Creek. As we pushed through Devil’s Club and various edible forest berries, it became apparent that this would not be an easy task. After much deliberation and scouting, we settled on walking across a single log that looked far more perilous than it turned out to be. Getting from the riverbank to the log was the most challenging part. 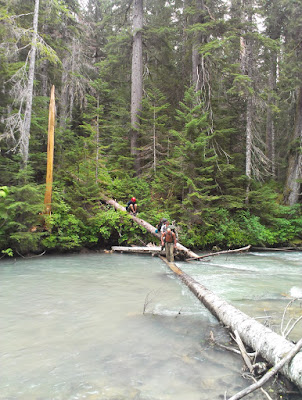 Once across the creek, we stashed a cache of supplies that we wouldn’t need for our high camp: tents, spare first aid supplies, water shoes, etc. This is where the real fun began. And by fun, I mean not fun. 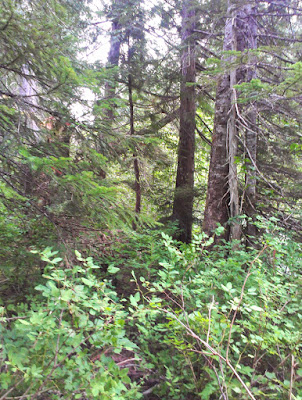 For several miles, we bushwhacked roughly along Access Creek, crossing it once, and thrashing through a mixture of steep, dense shrubbery and more flat, open forest. At one point in the relatively benign forested section, the front of the team upset a colony of ground nesting bees, which took out their anger on the latter half of the team. That included Simeon, Angela, and myself. Each of us was stung several times. We ran quickly to try to escape the fury of bees, but I still managed to get stung four times: on my right hip, behind my left knee, and on my left wrist and elbow. They went for critical joints, which I would curse them for later.

But there was nothing we could do about that now, so we continued on our journey. As we began to sense that we were nearing the basin and our high camp, the trees parted a bit to provide views of the creek and the rocky sided canyon containing it. As the tall trees diminished, the understory began to thicken. Devil’s club gave way to slide alder, a brand of vegetation notorious for heinous bushwhacking. It was critical to maintain just the right distance between the team member on either side in order to prevent being whacked by a branch or whacking the person behind, as well as keeping close enough so you wouldn’t lose them in the thick mat of branches and leaves. 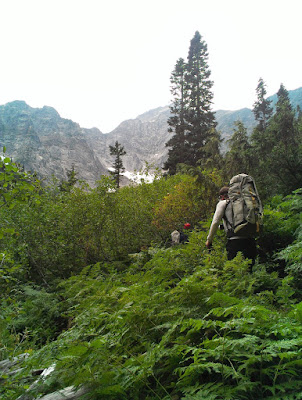 The ground got soft and wet as we approached the creek. “The grass is always greener on the other side,” I thought, as I looked through a window of trees and glimpsed large boulders piled on top of each other just across the way. Oh, how lovely it would be to get to that side!

The team agreed, and we made another sketchy creek crossing to make it to the heavenly rockpile we’d seen from afar. The walk to camp from here felt like a breeze. We all plopped our gear down in the flat, broad basin beneath Luna Peak and promptly fell off to dreamland for a couple hours. It was a peaceful and much needed afternoon nap.

What are the chances? 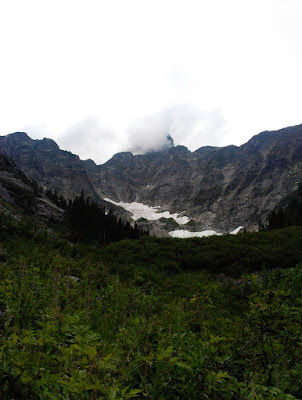 Gray clouds flirted with the ridgetops all day through the evening. There was much talk about the forecast: 50% chance of rain and thunderstorms for tomorrow. It sure looked like weather was moving in. Clouds swirled in and out the whole time we sat at camp, debating what Plan A, B, and a number of contingency plans were for every possible scenario. Tomorrow was supposed to be our summit day, but we gave ourselves a slim chance of that happening.

At 4:30 the next morning, our alarm clock (Alex) shouted, “the stars are out!” That meant clear skies, and an opportunity to summit. We ate breakfast, slimmed down our packs for the ascent, and made a beeline for the first gully.

Speaking of bees, by this point my arm and hand had puffed up like a balloon from the previous day’s bee encounter. I had a hard time moving my wrist, and everything was very itchy. The swelling would get worse and worse over the course of the day, which I attributed to the vigorous level of exercise, not some crazy allergic reaction. 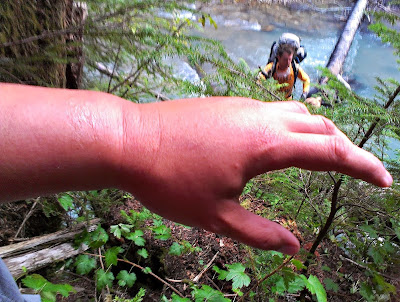 As the sun rose, it painted the mountains with orange and yellow. We ascended slowly, taking some time to acclimate to movement this early in the morning. At the top of the gully, we reached a col. Here, there were amazing views of the Picket range right in front of us, and no sign of the predicted thunderstorms. 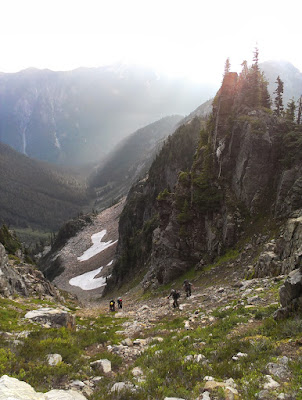 Take a right, then another right

We quickly powered up with some rugged, alpine blueberries and began the traverse through the heather. Some parts were fairly steep, but they did not necessitate an ice axe, which was suggested in other trip reports. We zipped right across the traverse and then picked a line to reach the summit ridge. Crossing patches of greenery, rock, and snow, we all climbed up to the final saddle, with Luna Peak rising up to the right.

It was here that Simeon chose to hang out, enjoy the views and take care of some blisters while the rest of us made the final scramble to the top. 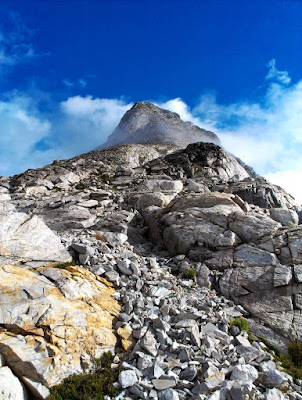 The ridgeline leading up Luna peak was bouldery and fairly solid. It never got too steep or treacherous. The rest of the walk was very pleasant, and the views on a clear day would be second to none. At this point, high clouds obscured the tippety tops of the mountains, and occasionally dropped down to fill the valley. We enjoyed peekaboo views of Luna, Challenger, and the other dramatic peaks extending out in all directions.

At the summit, or really the false summit, we sat down and savored the chocolaty treats that Eric brought up for us, surrounded in a gray fog. The true summit lay just a few minutes walk away, along a sketchy ridge that popped in and out of view. We weren’t interested in making that trek today. 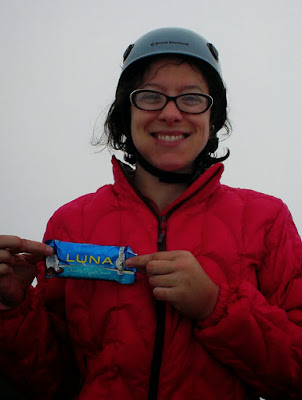 And then turn around

We returned the way we came, back down to the saddle, then down an alleged chimney, across a snowfield, and back to the vegetated traverse. It felt a little steeper this time around. 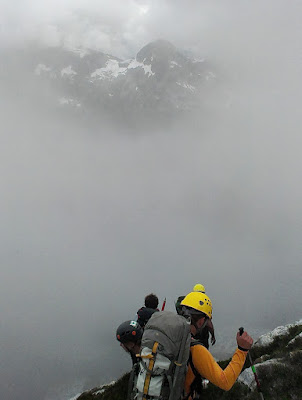 At the top of the gully, we split into two teams so we wouldn’t shed too much rock down on one another. Going down was painfully difficult, as my knee started acting up and refusing to play nice. I was elated to get back to camp, sit down, and tear into the Hostess cupcakes that I’d left hanging just above marmot’s reach.

But our day wasn’t over yet. We still had to complete the bushwhack and return to the trail, where we’d try and find a place to spend the night. We were all dreading the bushwhack. We put it off as long as we could, then loaded up our packs and began walking down the boulderfield. 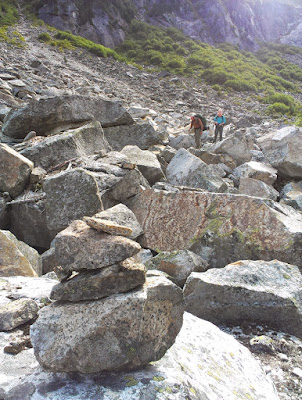 This time, we followed some cairns to try and locate a better place to cross the creek and avoid the slide alder. This was a success. Once across the river, we stumbled across a rough path that was a zillion times easier to walk on than our random path on the way up. The hardest part was going down the final steep descent to reach Big Beaver Creek and our gear cache. MIraculously, we hadn’t been rained on, and our unbelievable luck would continue as we re-crossed the creek and popped out on the other side.

We all mentally prepared for the final stage of the bushwhack along the creek. We decided that following a compass bearing and going right towards the trail was the best choice, to try to shave some time. One by one, we filed out in a line, pouring our last stores of energy into tired leg muscles. 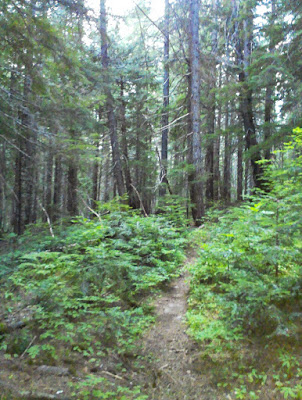 Not two minutes later, we stumbled across the trail. TWO MINUTES. We all looked at each other in disbelief, then smiled and praised the forest gods for this luck. After a short break here, we walked briskly, no, ran towards camp! We hoped there would be an empty spot at Luna Camp and sure enough, there was. We all unpacked, set up tents for the night, ate dinner and crashed.

The last day was a repeat of the ten mile walk along Big Beaver Trail. Again we sorted out into two groups and took off. My body was tired, but my mind was focused on reaching the lake. I wasn’t the only one who felt that way. Four of us reached the halfway point at 39-mile camp in just under an hour and a half. Sweet. We re-supplied with cold stream water, and hightailed it down to Ross Lake.

We were set to meet our water taxi at 2:15 and arrived at the lake by about noon. That gave us 2 hours to take off our boots, swim, lay down, eat the rest of our food, and bask in the glorious sunshine reflecting off the lake. What a perfect way to spend the afternoon. 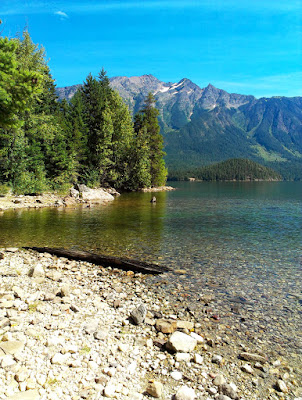 The last boat ride felt bittersweet. I couldn’t stop grinning as I looked back at the green mountains, sparkling lake, and wisps of snow on the high peaks. Once on the other side, I had a nice chat with Eugene as we slogged methodically up the final mile to the cars. My body had been on autopilot all day today, and that mile passed in an instant.

Overall, I had an extraordinary experience in the North Cascades. It was one hell of a way to start climbing season for me.