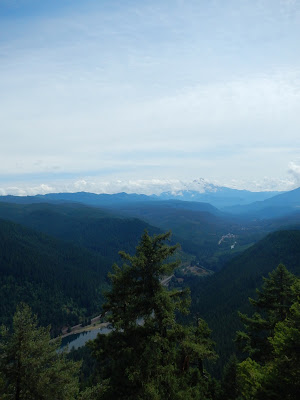 I needed to get back outdoors after having to cancel my big summer trip due to some D-bag thieves, and I figured I’d get in some more recon for the Wild in the Willamette guidebook. I set my sights on Stahlman Point, near Detroit Lake.

Aaron loaned me his daypack and some gear and we set out. I just replaced my camera yesterday (that I’d bought in April, grr…) with the same model I had before, since I found a great deal. As I was playing around with the setup I found that I could turn on a compass and altimeter, two features that could come in handy on later trips.

The Stahlman Point trail led steadily uphill towards the site of an old lookout tower. The first half of the hike was within earshot of the boats on Detroit Lake and the traffic of route 22. But after the elevation plateaued and the trail turned a corner, the sounds disappeared. 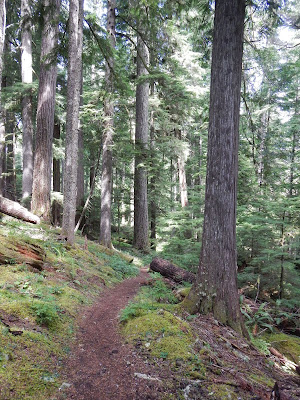 We enjoyed the rest of the walk in relative quiet. Moisture clung to the leaves of the ferns, Oregon grape, and other low growing plants while huge Douglas firs towered above us. We picked the occasional red huckleberry as the trail began to climb again. The ground was soft, covered in spots with needles that had fallen from above. My minimalist Merrell shoes performed nicely.

Oh no! The sounds of traffic resumed and the treetops began to thin. We were reaching the top. To the right, a moss-covered, rocky ridge appeared from behind the trees. The trail, however, forged ahead and we dutifully followed to its abrupt end atop some cliffs. 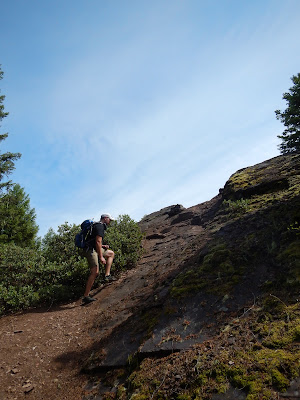 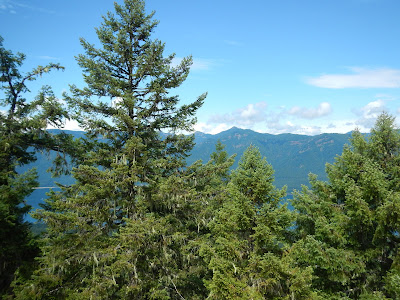 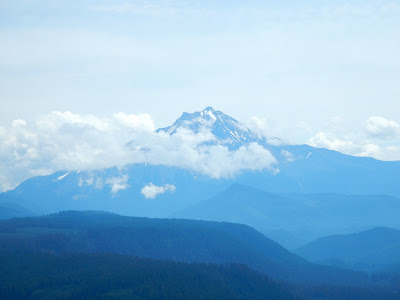 The remnants of the fire lookout’s foundation were all that was left. A sign memorializing Jim Stahlman, the grandson of the original Stahlman, hung from a random tree near the high point. We hung out here and basked in the cloudy view of Mt. Jefferson, listened to the trucks cruising down 22, and breathed in that fresh outdoor air. No, it was not a glacier-topped summit in the wild North Cascades, but for me, it was just what I needed. A first step forward after a tumultuous few days. I’m ready.

On our way back, we veered off-trail up to the rocky ridge we eyed on the way up. It was cliffy and abrupt, with cool views of the nearby landscape and distant peaks. After this very minor exploration, we returned to the trail and we were back at the car in no time. We passed one other couple heading out as we were going down. This was a nice diversion in a part of the forest that was new to me. There were a ton of campgrounds nearby and I’m sure there are other hiking opportunities on lost trails or gravel roads. I’ve got some sleuthing to do.

Of course, we stopped for milkshakes on the way through Detroit, which is a must for any summertime excursion out that way. That, and a nice nap, will get you through the bumper-to-bumper RV traffic a little more quickly.