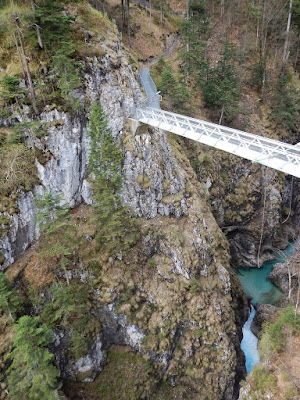 We’d done our fair share of being city tourists in France and Germany, and were excited to take advantage of some hiking opportunities in Bavaria.

Our first hike was close to the cute little town we stayed in last night: Mittenwald. This picturesque little village sat alongside the Alps, offering views of great rock faces and dark, forested hillsides. A short drive brought us to a time-limited parking space. The only reason this was notable was due to the fact we had to place a little paper clock on the dashboard showing what time we’d arrived. The clock was provided by the rental car, and thankfully Aaron had read about this quirky fact before we took our trip. With the clock in place, we set off for the trailhead.

The waterfall hike was closed, so we scanned the map and crafted a loop that was roughly a few miles long. The map was so detailed that trail segments were measured in meters, so we practically walked the entire trail system there. 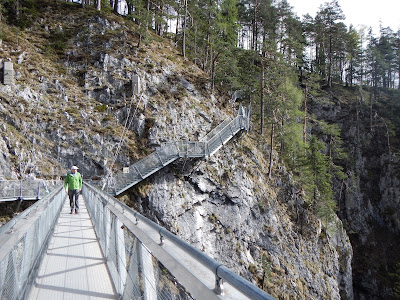 The Goblin trail was the most fun and interesting, as it took us along metal walkways and bridges that put us right on top of the gorge. This crazy network of “trails” was manufactured right into the rock. We could look beneath our feet to the river, a couple hundred feet below us in some places. I was happy that our early start meant that no one else was out there; it would have been much more scary if the walkways were mobbed with people.

In addition, there were several signs along the way that detailed how the gorge was formed, what animals lived there, how to identify plants, and lots of other interesting facts. Each sign was colorful and written in a few languages, so we actually learned a thing or two. 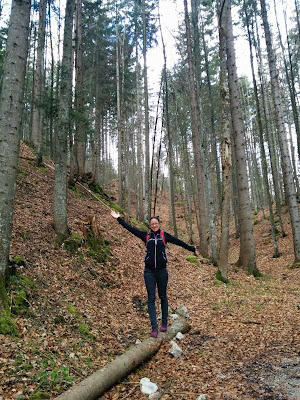 After finishing the gorge walk, our hike looped back through the forest. At some point we found ourselves briefly in Austria, as indicated by a small sign. No passport required there!

With just a half mile or so to the car, the weather suddenly changed and a passing storm dropped hail and rain on us. We ducked under the roof of a nearby lodge (closed) and ran into a young girl who had also taken shelter out of the storm. She chatted us up in English as best she could, and when the rain relented the three of us walked back to the car. We bid our new friend adieu as she rode her bike back into town. On to the next adventure. 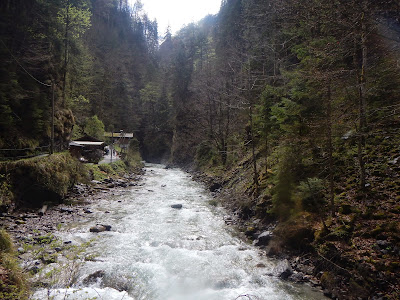 The second hike was much different than the first. It was located near the Olympic Ski Stadium in Garmisch-Partenkirchen, a buzzing hive of tourist activity. We were on a time schedule to get our rental car to the drop-off in Munich, so with that in mind we picked up a map at the Tourist Information desk and started walking towards the gorge.

The paved road leading to the trailhead was busy with other people walking, biking or taking a horse-drawn buggy to the gorge entrance. When we finally made it there, we found a little ticket booth with a woman collecting a 3.5 € entry fee per person. She told us the hike was a loop, so we started straight ahead as instructed.

I was surprised at how many people were shoving their way against the flow of traffic. “What loop??” I thought, as families and couples retreated towards the ticket booth. I was doubtful we’d have enough time to complete this hike.

This trail, in contrast to the previous hike, was just above the water coursing through the gorge’s rocky walls. In many places, a trail tunnel was blasted into the rock. In others, the trail was made of steel beams. Handrails protected hikers from falling into the swirling river, or being pushed in by the madding crowd. 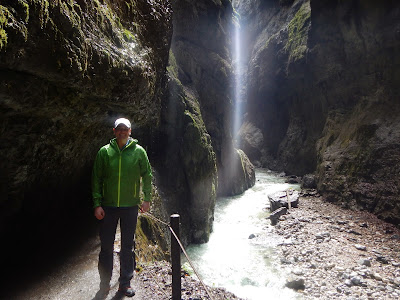 Water dripped down on us from above, and spray from the fast-moving water blasted up from the river below. It was raincoat time. After we exited the claustrophobic, yet beautiful, gorge, the trail climbed up an open hillside and brought us to a wider and more gently flowing part of the river. This appeared to be where many people stop for lunch and then turn straight back. We continued up, determined to make our loop, switchbacking up the hill to an even more idyllic setting. The sun blazed high in the blue sky, brightening the grassy meadows and clusters of wildflowers. The high peaks of the Alps formed a beautiful backdrop on the whole scene, which felt quite like a movie set. 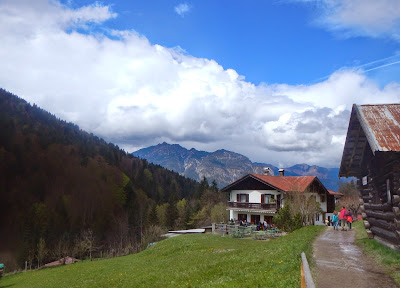 People were milling about up here as well, but as soon as we dropped down the other side of the hill, we were on our own. We walked past a curious sign that announced “Way only for practiced” and discouraged children from using the path. “Cool,” I thought. Now we’re on for an adventure. 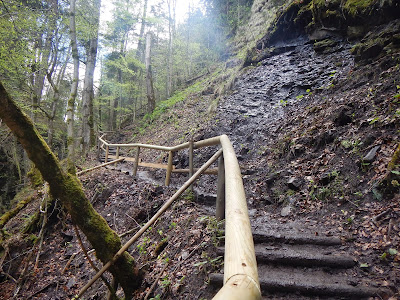 The trail here was muddy in sections but it was well built and had several sets of stairs and handrails to guide hikers through the roughest bits. I thought it was a pleasant walk. The scary sign kept everyone off the trail, so we were able to finish the loop in quiet solitude. It was the polar opposite of the tourist trap we just scrambled out of.

We returned to the ticket booth, checked the time and hoofed it down the trail to get back to the car. There was no time to waste.

How not to return a rental car

We had just enough time to drive to Munich and return it at the train station by 4 pm to avoid being charged for an extra day. We’d never been to Munich before, as we’d picked up the car in Frankfurt and were just driving the one way. We plugged the train station into the GPS and were on our way.

Racing down the Autobahn was fun for Aaron and scary for me. But I’d no idea it would get so much worse when we entered the city. In the city, we hit traffic. Traffic of all sorts: cars, trucks, bikes, pedestrians. I wouldn’t have been surprised to see a man on a camel in the middle of the road. We scrambled to find a gas station to fill up, detouring around construction and trying to interpret all the German signs we’d barely become familiar with. Miraculously, we navigated the gas station and drove to the train station. Traffic congestion increased at an exponential rate the closer we got to the station. People were all over the road. Lanes inexplicably split off in all directions, with one-ways, train tracks, bike lanes and all sorts of other confusion muddying up our drive. To top it all off, we couldn’t figure out where the car drop was.

We circled the train station several times, once mistakenly turning ONTO the train tracks, until we found an underground parking area. We parked the car, ran into the train station, and asked the first English-speaking staff person we could find to direct us to the rental office.

The man at the rental counter kindly gave us a map and directions to the car drop site, which would have been very helpful to have had at the start of our journey, and we ran back out to the car.

Tension was high in the car as we barreled out of the train station and followed the new directions to the car drop. We pulled in, Ace Ventura style—”like a glove”—and breathed a sigh of relief. It was 3:50.

It was really nice to have a car for this leg of the trip. We had the freedom to come and go as we pleased, travel to areas we couldn’t walk to, and see some of the German countryside from the comfort of a car. But I absolutely stressed about this car return. I’ve learned a few things about how to better prepare for next time. At this point I was so ready to be back to being walking distance from everything in the city. And we’d finish our trip with a couple of days in Munich, Germany…