N. Fork Sauk Trail > PCT > Kennedy Creek and back, plus a side trip to Portal Peak 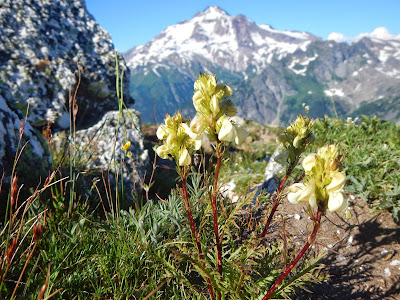 Backpacking. It’s one of those activities on par with cleaning the basement, doing my taxes, and going to the dentist. It is not one of the things I prefer to do with my precious time off. However, this was supposed to be a mountain climb, and I was invited to go by two people I was really interested in meeting. So I blocked off some time and met up with my shiny new hiking partners in preparation for a 4-day climb of Glacier Peak. 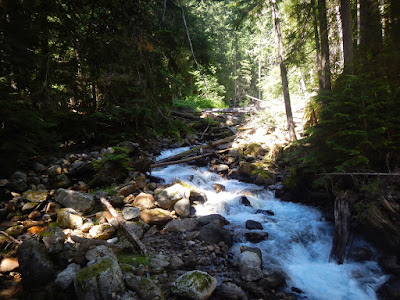 Day one was hot and long. We set off along the North Fork Sauk River, gaining roughly 1000′ in the first 5.5 miles to the Mackinaw Shelter. This was the easy part. In the next four miles, the trail rocketed up 3500′ in a series of switchbacks leading to Red Pass. The lower portion of the trail kept us relatively protected in the shade of the forest, but as we climbed higher, we entered longer and longer stretches of wide open meadows. The meadows were green, lush, and dotted with colorful wildflowers. But the sun felt extra hot here. I was overjoyed when we hit the PCT. The grade mellowed, and we were on the home stretch. 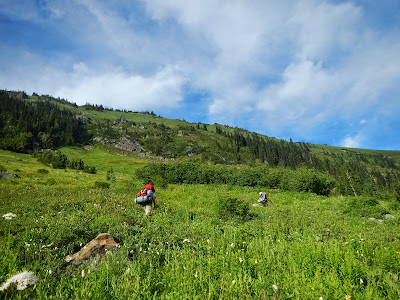 When we crested Red Pass, we dropped our packs and took a deep breath in. The scenery was magnificent in all directions. Behind us, Sloan Peak stood out from the numerous snow-capped ridges and hills stretching in all directions.  Over the pass, a broad, snow-filled basin provided a look at some new features on the south side of Glacier Peak. As the sun set, we prepared dinner and then nestled into our sleeping bags for a good night’s rest.

Day 2: search for the climber’s trail 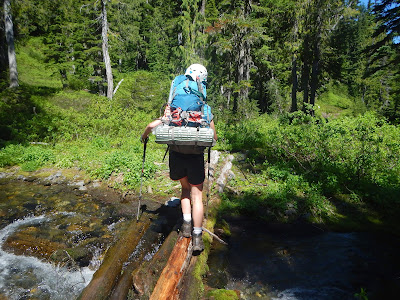 We got off to a late start the next morning, and began hiking in the heat of the day. From the pass, the PCT dropped over 2500 vertical feet in the next five miles. It was depressing to lose that much elevation after working so hard to get up there. We trudged along, through bright meadows and dark forests, along snowmelt trickles and rushing streams. We were on the hunt for the Sitkum Glacier route. We had a couple of maps and a little bit of beta to go on, but no recent trip reports with updated conditions or directions. Regardless, we hiked for several more miles to the WC trail. Here we kept our eyes peeled for a cairn, a brushy trail, or any other indication of the climber’s route.

We found no such clue, and found ourselves eventually at a broken bridge over Kennedy Creek, which we knew was too far along the trail. We then headed back the way we came, scouring the trail for any sign of the way to go. I sat down for a while while my partners wandered through the forest. It was almost 5 pm. We had 3500′ to climb to get to the basin. Tonight. I knew it wasn’t going to happen. 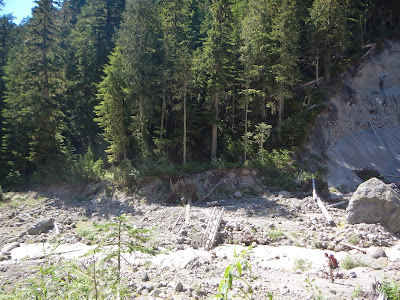 I had to be the Debbie Downer to break the news. We were all exhausted and frustrated. But we’d recently passed a sweet backcountry campsite, so we returned there and set up camp for the night. 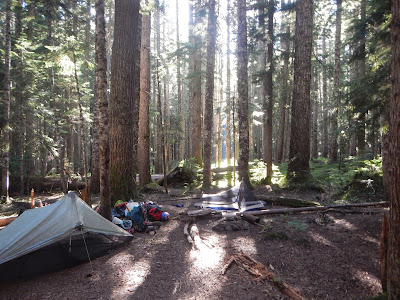 A quick wash in the river followed by a fire-side dinner brought our spirits up. We chatted until well after the sun set, then retreated to bed. 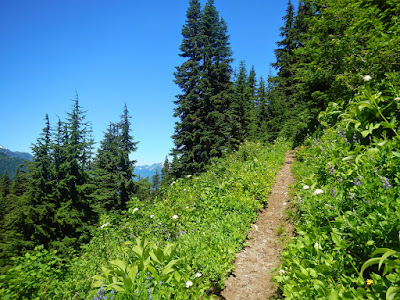 After a nice long sleep in, I bid farewell to my hiking partners and began the trek to Red Pass. They had already planned to circumnavigate the mountain post-climb, so their journey led north and mine led south. I walked in solitude back through the woods and meadows I’d traveled the day before, seeing everything from the reverse perspective. Again, it was brutally hot and now I was headed uphill. My legs were tired and I just couldn’t drink enough water. As lunchtime approached I desperately looked around for an adequate spot to rest and refuel. After passing a few so-so locations, I stumbled into the most perfect location for lunch. A small stream tumbled down a green meadow dotted with snowfields. The huge basin beneath the pass fanned out before me, and Glacier Peak stood like a sentinel over the whole scene. I inexplicably broke into tears, the combination of adrenaline, hunger, thirst, fatigue, and awe spiraled out of control. I wiped my face, broke into a smile, then quickly got to work filtering water and setting out my lunch.

From here, it was a quick walk up to the pass. The easy switchbacks of the trail allowed me to move steadily, despite the intermittent snow. The Crocs handled like a champ. As I approached the pass, I saw a couple of humans and their huge dog. This was the first sign of life I’d seen since leaving camp. I worked up a friendly conversation starter in my mind as I continued up, but was startled by their dog who’d bolted down the snowfield towards me. It barked and growled, running circles around me as I stood and shot an angry look towards the couple. They made a half-ass attempt to get control of the dog, which failed. I waited, prepared to wail on the beast with my hiking poles if it got any closer, but they finally grabbed its collar and pulled it in. I walked by with a brief “hi” and kept on going until I reached my camp. What a horrible encounter.

Two nights ago, while camping at Red Pass, I’d eyeballed Portal Peak. From the pass, it looked to be a stone’s throw away, just about 400 feet of elevation gain and a quarter of a mile’s walk. I was dying to get a summit, so I made this my goal. 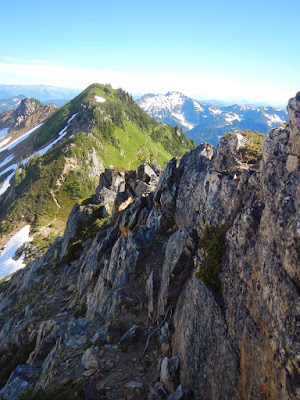 With not much more than a water bottle and camera, I scrambled up rocky ledges and heather meadows to the top of the peak. I was overjoyed to see a summit register and USGS marker, as well as an unobstructed view of Glacier Peak. I hung out up here with the butterflies and wildflowers as I scanned the horizon trying to identify the mountains. I was completely out of my element; it was my first trip to this area. I thought about all the PCT hikers who had walked just a few hundred feet below this spot but never paused to leave the trail and take in this view. Amazing. 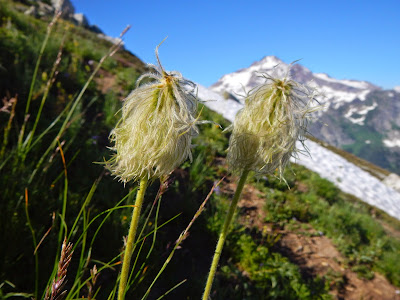 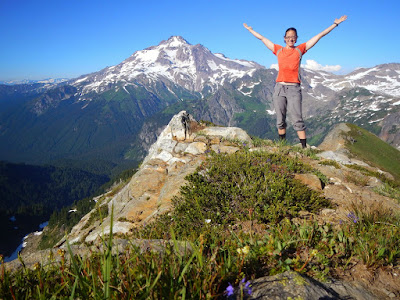 I awoke to a beautiful sunrise, finally an early wake-up. After breakfast, I packed up and began the descent. The early morning air was cool and breezy. But that didn’t last long. The summer sun picked up and I shed layers. I was under no time crunch to get back to the car, but I really wanted to be done. 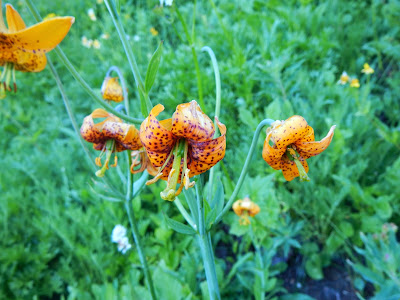 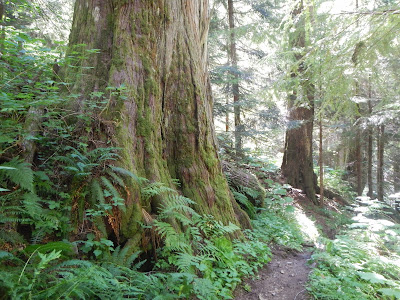 On the way back down I passed by a trail crew working to clear vegetation and divert water from the trail. I also passed a ton of hikers coming in, and a train of mules and horses carrying gear. It felt much different from my wilderness solitude the day before. I was pretty ecstatic when I saw the trailhead.

And now, for something completely different

I had a couple of days before I would meet up with my next climb team near Stevens Pass so I planned to do some car camping along the river. I drove just a few miles back along the North Fork Sauk River and found an excellent dispersed campsite on the left side of the road. There were no other campsites nearby. 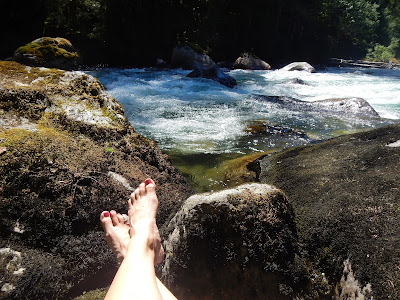 I spent the rest of the afternoon and the following day relaxing by the river, reading, stretching, and basically doing as little as possible. It was a perfect end to a strenuous trip. Car camping in the right place can feel just as much a wilderness experience as camping in the backcountry. The roaring river drowned out any noise from passing cars, the canopy of trees offered respite from the summer sun, and the soft, flat ground provided a comfortable, low-impact place to pitch a tent. A nice, big fire ring gave me a safe place to build a campfire and ample deadfall in the area provided the fuel. If I’d only left a couple of beers in the car, it would have been the perfect end to a lovely trip. 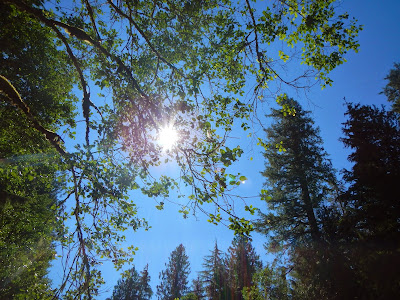