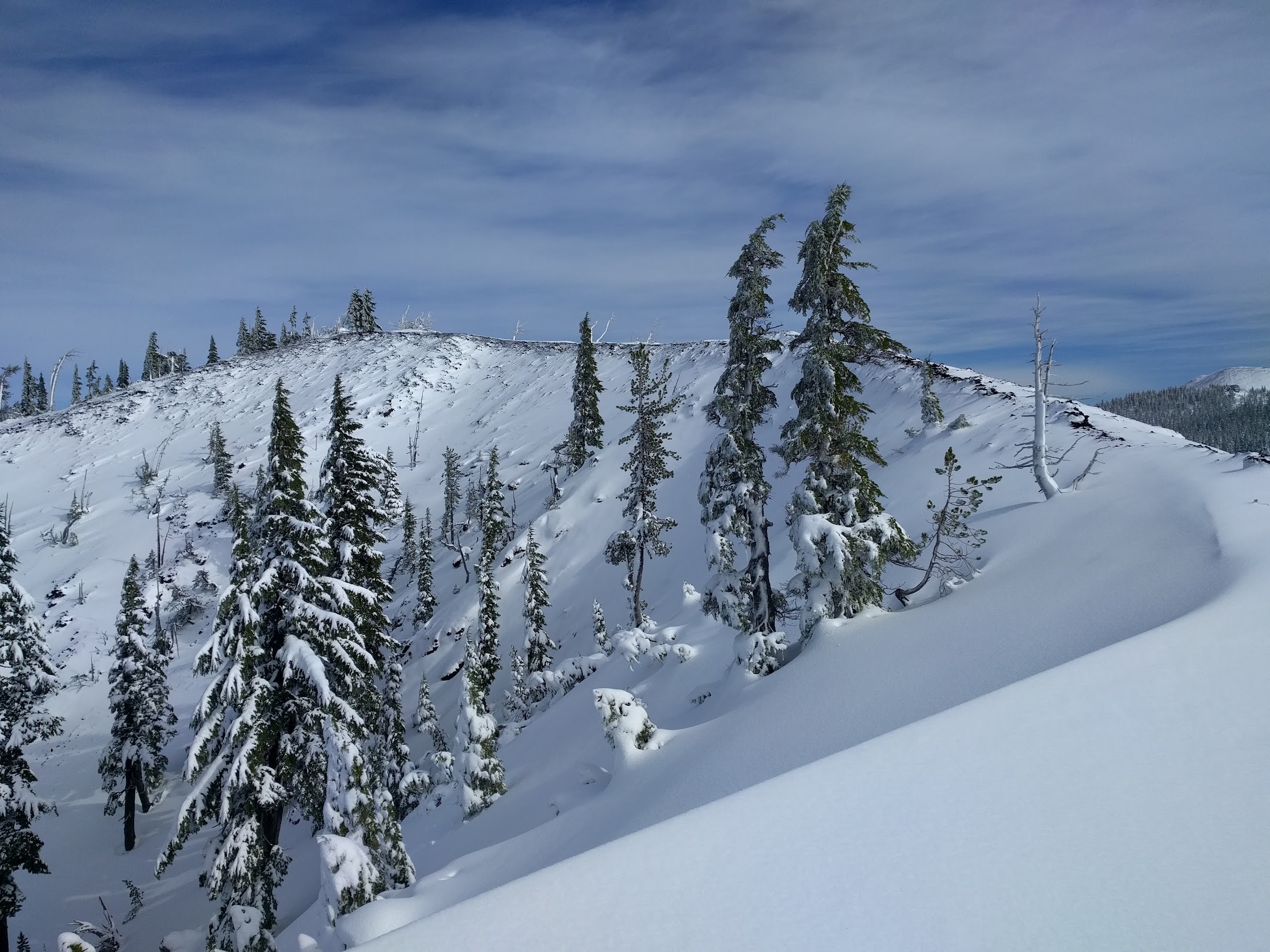 Weather window + free day on the calendar = adventure time. Today I decided I wanted to see some snow-capped lava.  Since the Old McKenzie Highway was still driveable, I set out for the Scott Trailhead in an attempt to reach Yapoah Crater.

Just getting to the trail head was an adventure. Black ice covered the road west of Dee Wright Observatory, and the road to the trailhead looked more like a swamp than a road. I got out of the car and poked through the water with my hiking poles to see if my little car could make it. Luckily, the water looked much deeper than it actually was, in most spots. 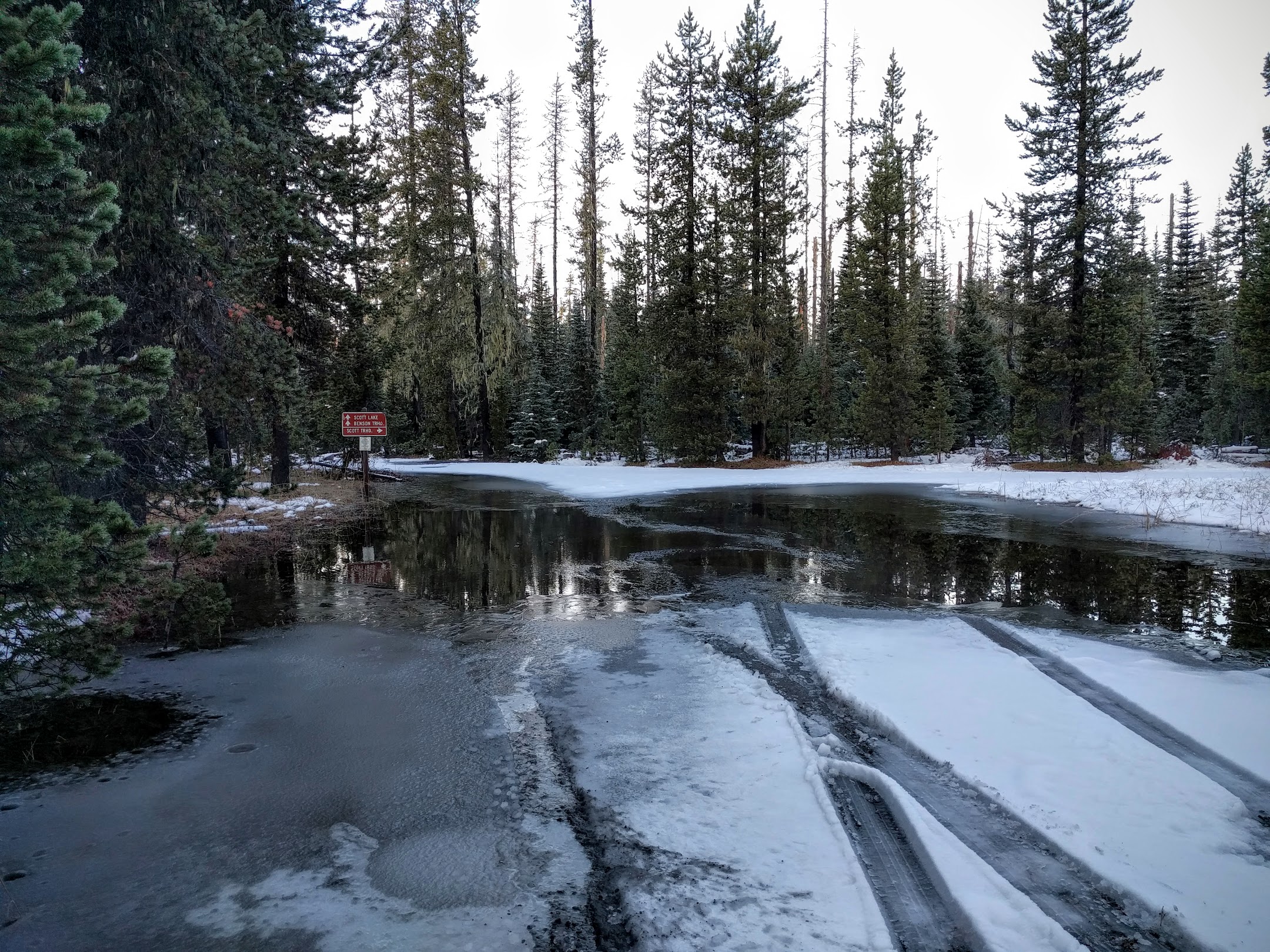 I got to the trail head, crossed the highway, and set off along the very mucky Scott Trail. Parts of the trail were so waterlogged it felt like I was walking up a streambed. And the last thing I needed was soaking wet feet in the first tenth of a mile of a 12 mile hike. I carefully skirted around the worst bits, trying not to crush too much vegetation in my efforts to keep dry feet.

I fell into that comfortable solo hiking rhythm, following a serpentine train of thoughts in my head. As the terrain kept buzzing by, I had that sneaky suspicion that I was off track. How could that be, I thought, since I literally just had to stay on the same trail for miles until I had to make some decisions?

I came up to a trail sign, and that’s when I knew I’d missed a junction. I was headed towards the Obsidian Trail. Ah, crap, turning around always feels bad. How could I have made such a stupid navigational error?

I arrived back at the junction where I should have gone left instead of right and knew exactly why I had missed it. 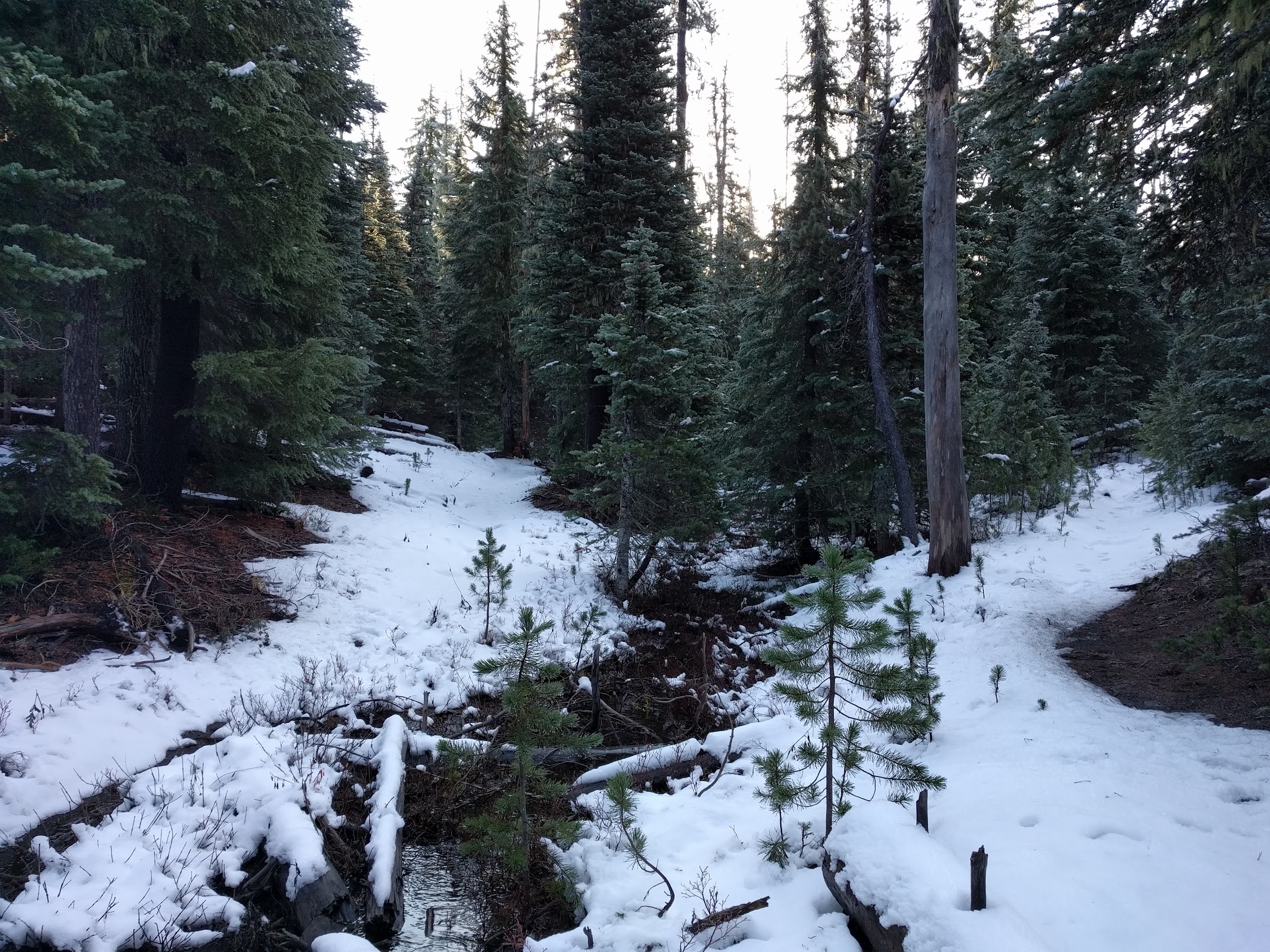 I had been walking to the right of the creek, and simply kept walking on that side. The Scott trail crosses the creek right here and goes off to the left. There was no sign and you can barely make out a trail over there. Welcome to the joys of shoulder season hiking!

No worries, now that I was on track I could get back to being lost in my head. It was so pretty and quiet. There were lovely little footprints in the snow. Oh hi there bunny rabbit, where were you running off too? And you, little squirrel-y critter…what was your story? And you…. mister….. 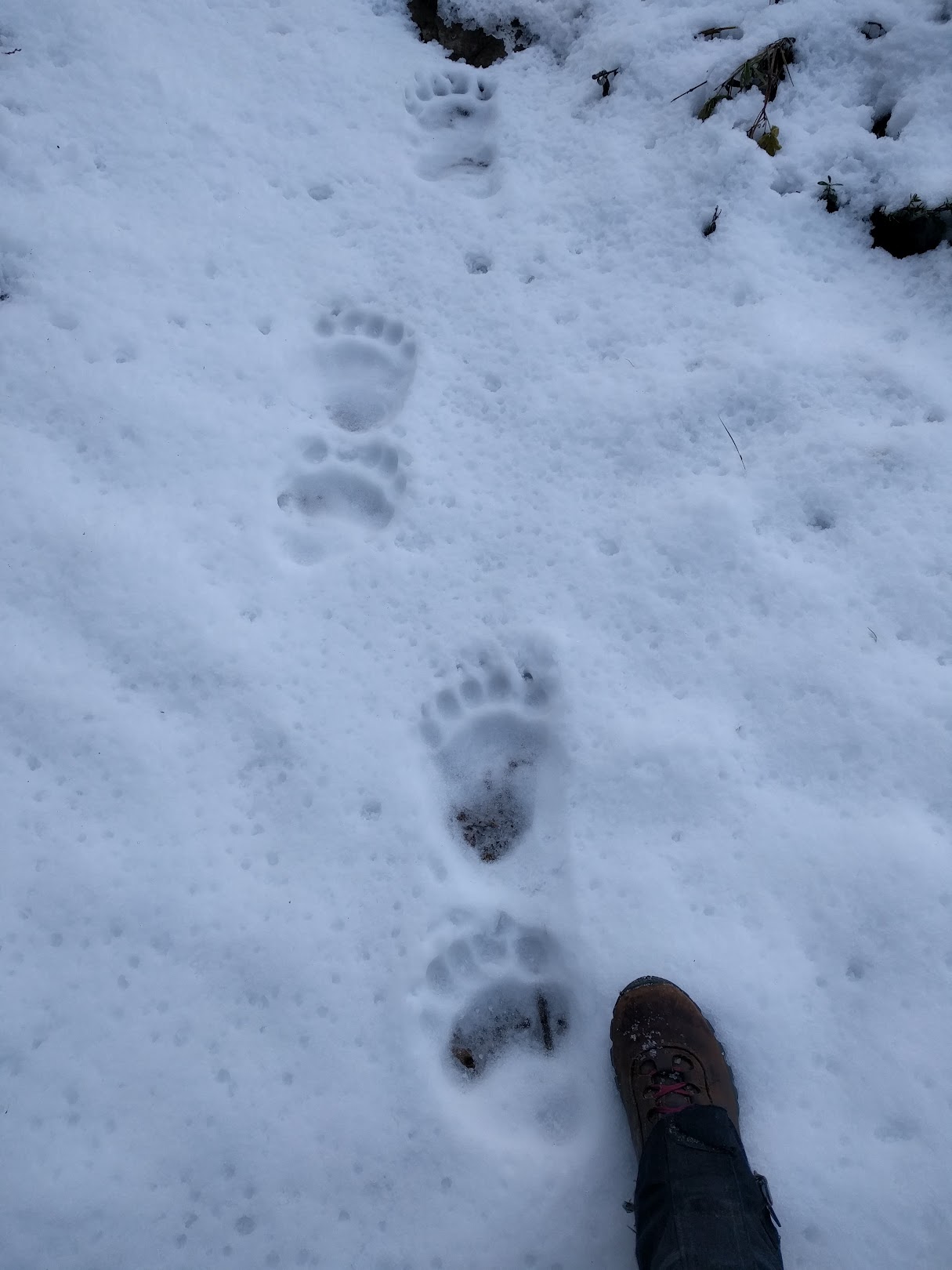 Goddammit. Broken out of my reverie once again. The bear tracks continued straight up the trail, and they looked fresh. I broke into a loud song: “HEY BEAR!! HEY THERE BEAR!!! WHERE’S THE BEAR?!!!” I accompanied my melody by clacking my poles together and trying to be as loud as possible. When the tracks retreated downhill, into the forest, I kept up my noisemaking for a little while longer and then settled down.

Ok, now it was time to get down to business, I’d hoped. The trail broke out of the thick trees at a switchback and I got a brief view over the forested hills and snow-covered slopes nearby. Then, the trail returned to the woods where I finally was able to settle into a pace and put some miles behind me.

I’d hiked this trail a couple of times before. Most recently, I’d used it as a return route from a hike up the Obsidian Trail to the Collier Glacier Viewpoint. And several years ago, I’d hiked up to Four-in-One-Cone. But both times it was in summer. The snow cover gave this place a distinctly different feel. It was like hiking on a brand new trail.

Eventually the trail traversed past a crumbly lava wall. This was the part I was looking forward to. The contrast of the sparkly snow on the dark lava rock was quite beautiful. And soon I’d enjoy views towards North Sister. 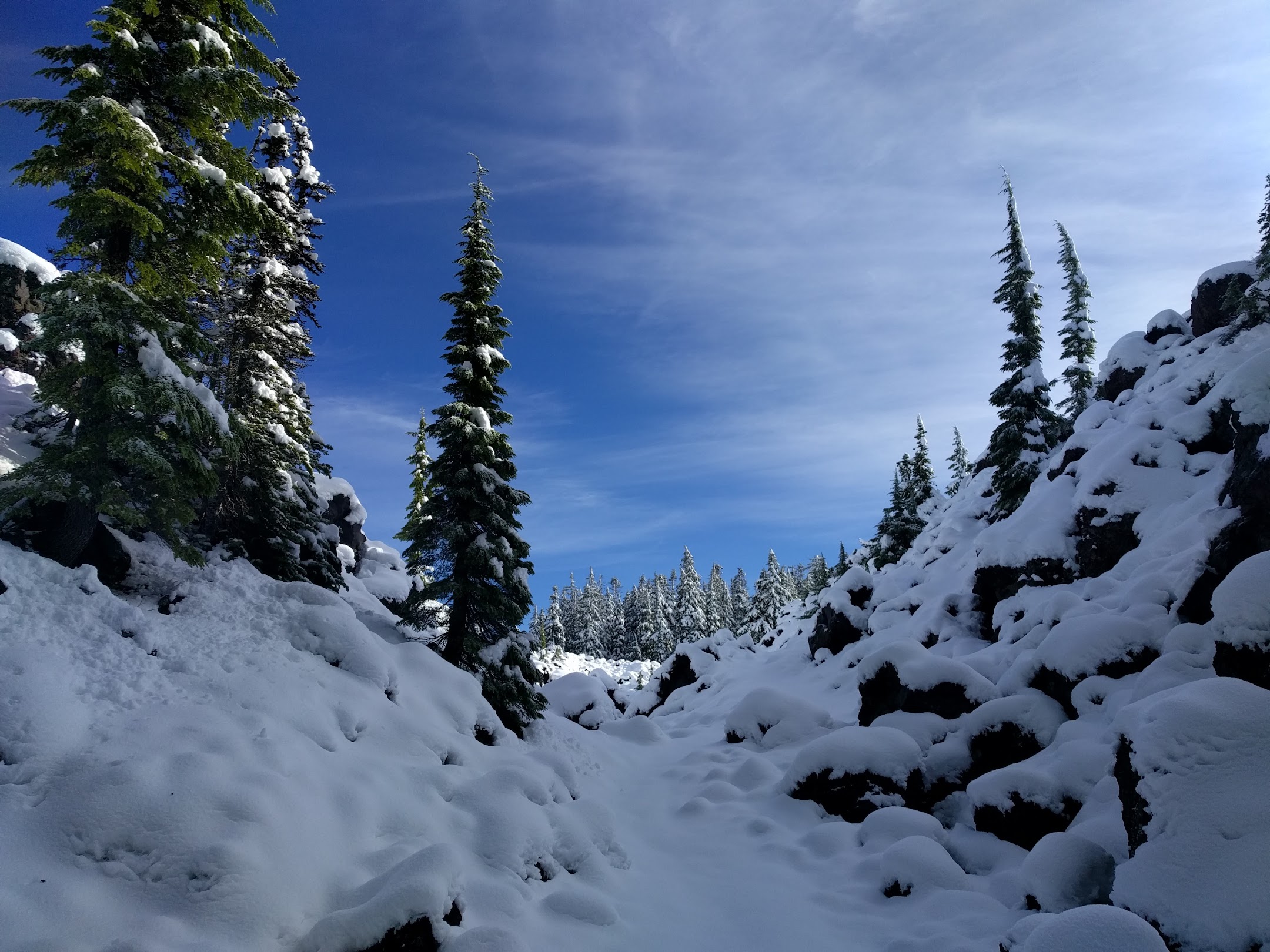 But here, the walking began to get much more difficult. The snow in the trees was crunchier and much less deep. Out in the open, the snow drifted much higher. A thin crusty film overlaid light, fluffy powder below. Each step I’d lift up my foot as if I was marching, crunch through the top layer of snow all the way to the bottom, then repeat. It was exhausting.

As I slowly proceeded up the trail I could see that the conditions were only going to continue to get more difficult. I had a few more miles to go to Yapoah Crater. I could also see that clouds were moving in, and the weather wasn’t going to hold up forever. With each step I weighed my options, and decided to go for my backup plan: Four-in-One-Cone.

There was a spur trail on the map that led up to the summit. Once I got the peak in eyesight, I decided to just pick my way up there. Way off in the distance I saw something that looked like a signpost, but there was no point trying to stay on trail. Breaking a path up the perfectly smooth and untouched snow slope made me happy. 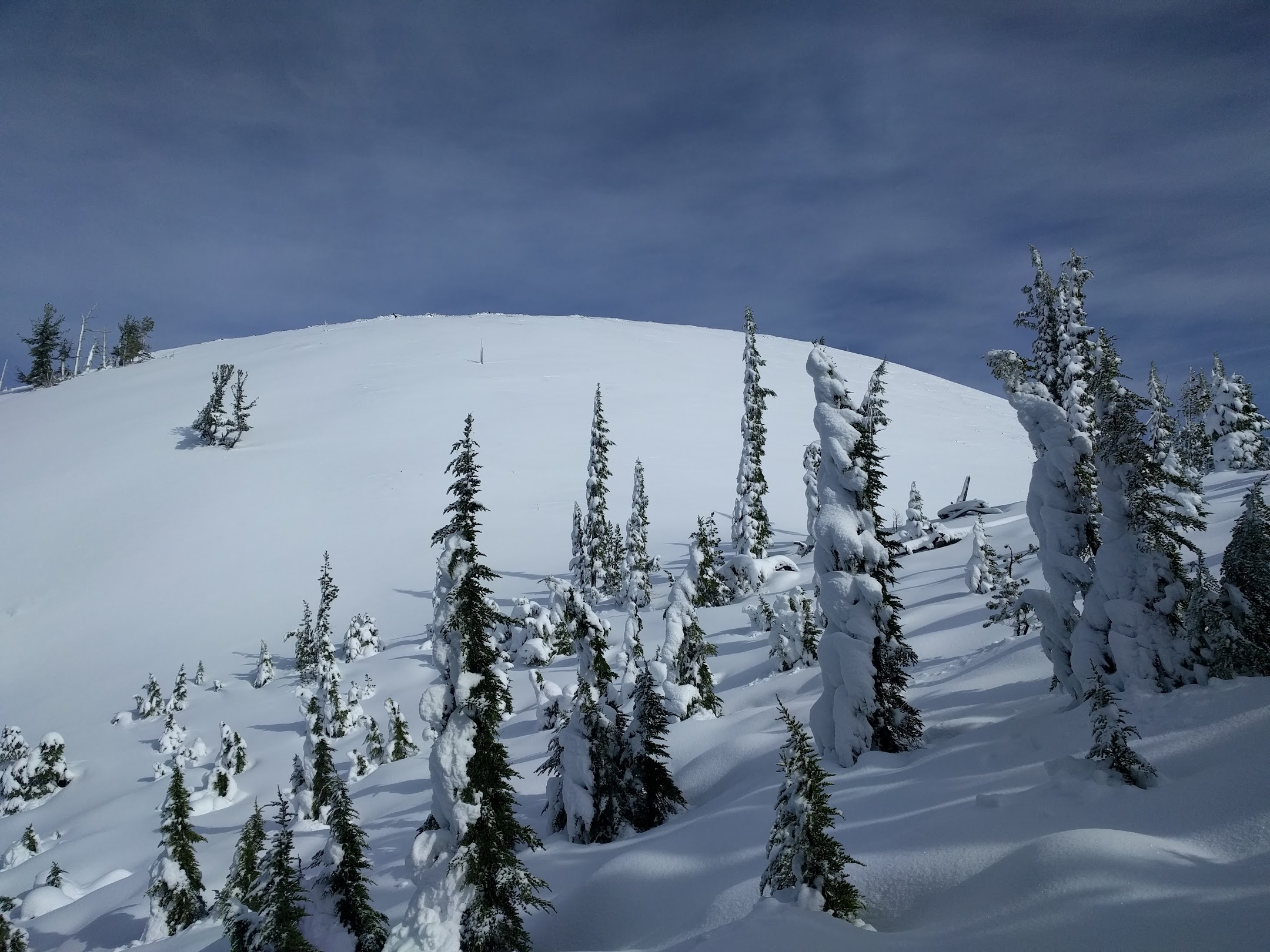 The snow up there was more wind-blown, so I sought out the thinnest spots where my boots could get some purchase on the cinder. I couldn’t believe I didn’t bring my snowshoes with me today. Stupid. I’d have been halfway between here and Yapoah Crater if I’d have planned better. Oh well, this was a pretty awesome consolation prize.

Once I hit the ridge, a blast of wind hit me and I quickly put on my rainshell before pushing on towards the summit. I walked up to a seriously twisted tree near the top and memories of my last climb up here came flooding back. Now it was a totally different scene: a pristine winter landscape, with an incredible halo above North and Middle Sister. 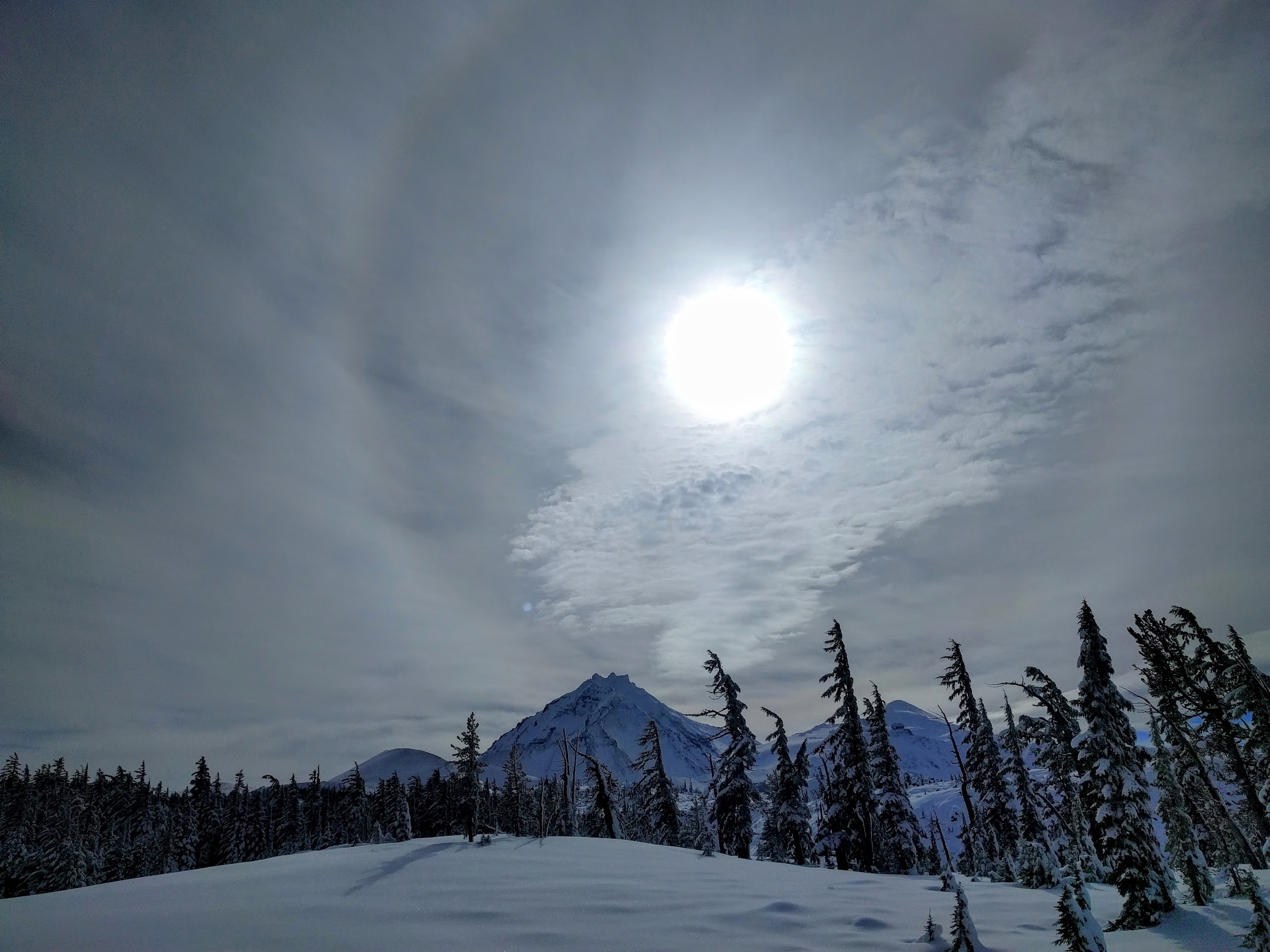 The view was surreal. And it was so quiet. I hunkered down out of the wind to eat the soup I’d packed for lunch. I took some time to just sit and be there. From my perch I looked out across a vast lava landscape, the one that inspired my Lavapalooza trip last summer. How different it looked back then. 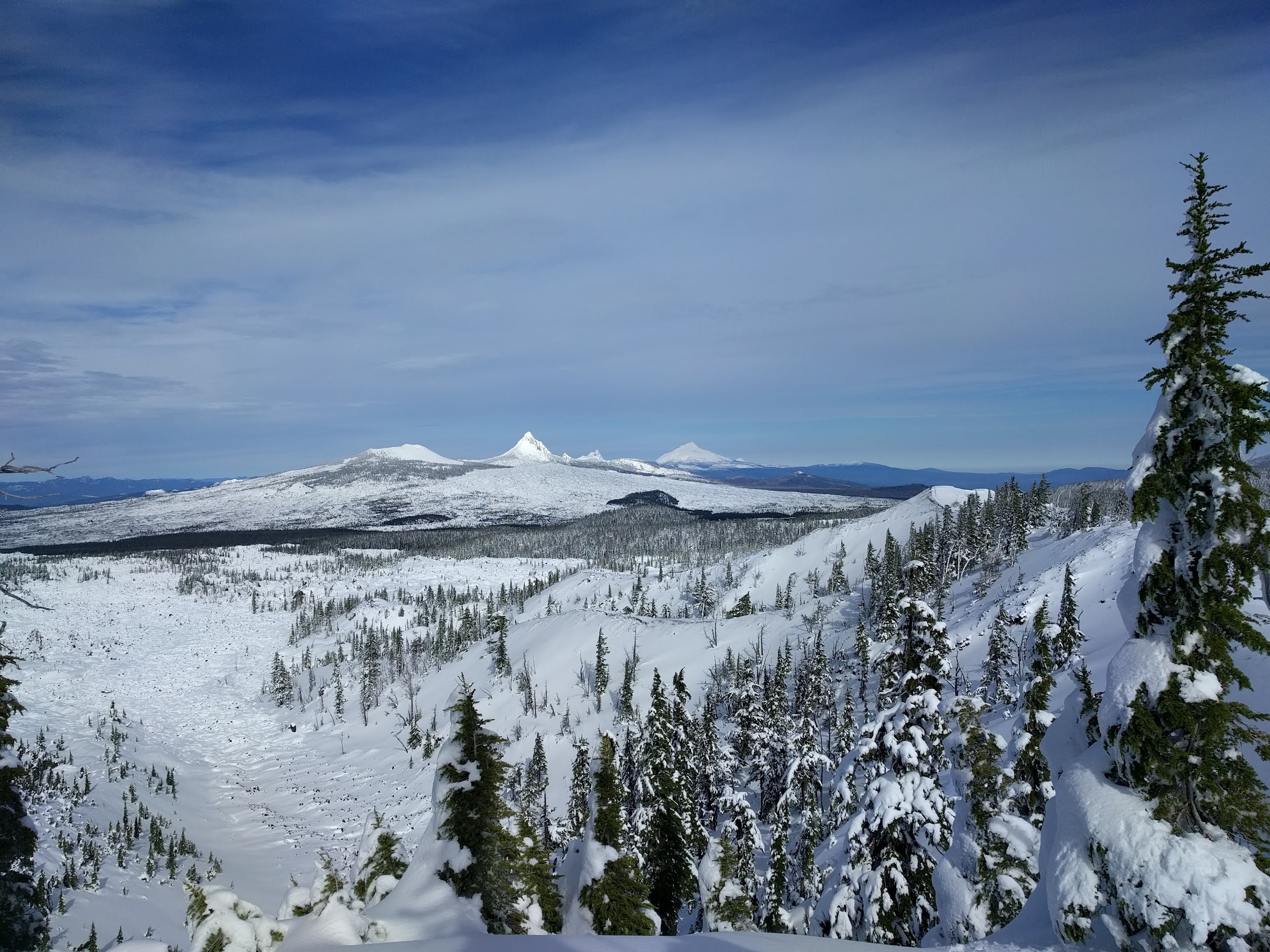 This is the Three Sisters Wilderness. The one that screams of overcrowding and ill-prepared tourism. This is the place that can feel like a complete zoo on a nice, summer weekend. This is that same place, but a different place. On a Wednesday. In October. With not a soul for miles.

You do have to work a little harder to find solitude. You have to be flexible with your schedule. You have to choose the right trail, or choose to go off it. But in about 90% of this wilderness you’d be challenged to find another person sharing space with you. And to me, that little extra effort is 100% worth it. To be here, alone, with the wind and the snow and the bear tracks, is an experience that cannot be found on a hike up South Sister in August.

I killed a decent amount of time up there before deciding to pack up and go. It was a bit sketchy on the way down. I searched for the deepest snow I could to plunge my heels in and feel some security. No Yaktrax today either, so DUMB! Before long I was back at the deep postholes I’d left on the way up, and I dutifully followed them back to the trail.

On the walk out, under the blazing sun, everything was melting. The snow piled up on lava rock was more shiny than sparkly now, and by the time I made it to the woods, snow was pouring down off the tree tops. I put my hood up and moved as quickly as I could. But I got nailed with a couple of massive snow bombs: one right on the top of my head, and one on my forearm. They scared the crap out of me! 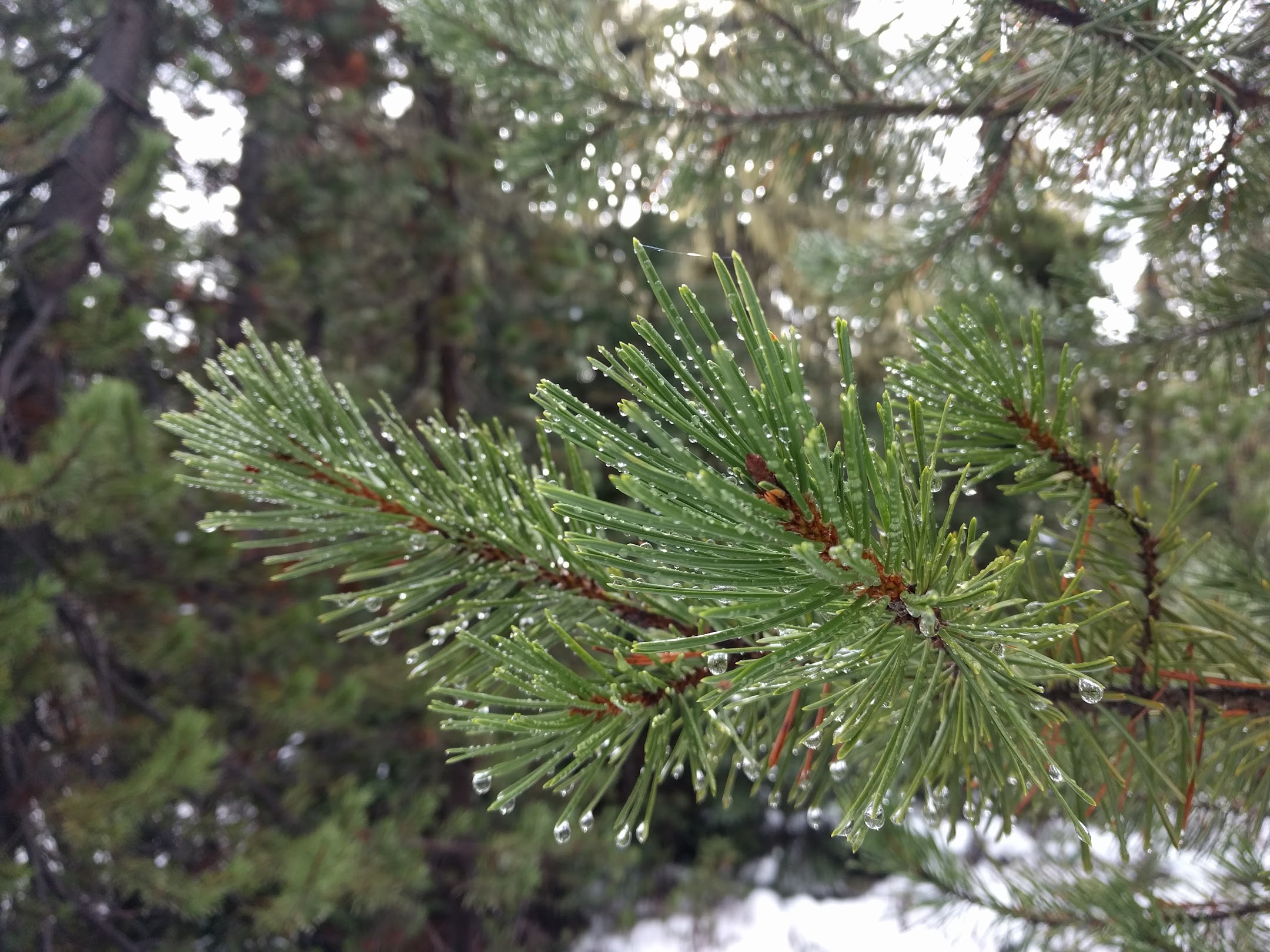 But the forest was still beautiful. It got me in the mood for winter. For snowshoeing and climbing and hot cocoa. For long, cold nights huddled around a campfire. For big skies full of stars.

After the hike I stopped by the Dee Wright Observatory at McKenzie Pass. There were several groups of retirees on sightseeing trips, waddling around in the snow. I walked up the stairs to the viewing deck and took in a panoramic view of all of it. All those snow-covered volcanoes. Picking out the ones I hadn’t yet climbed to the top of. Someday, Jefferson. Someday…