Living in Bend has opened up many doors for recreation. Now, Crater Lake is only a 2 hour drive from home. So we sneaked in this last chance opportunity to visit several of the park’s attractions before the north entrance and rim roads are closed up for the winter. Here are the highlights. 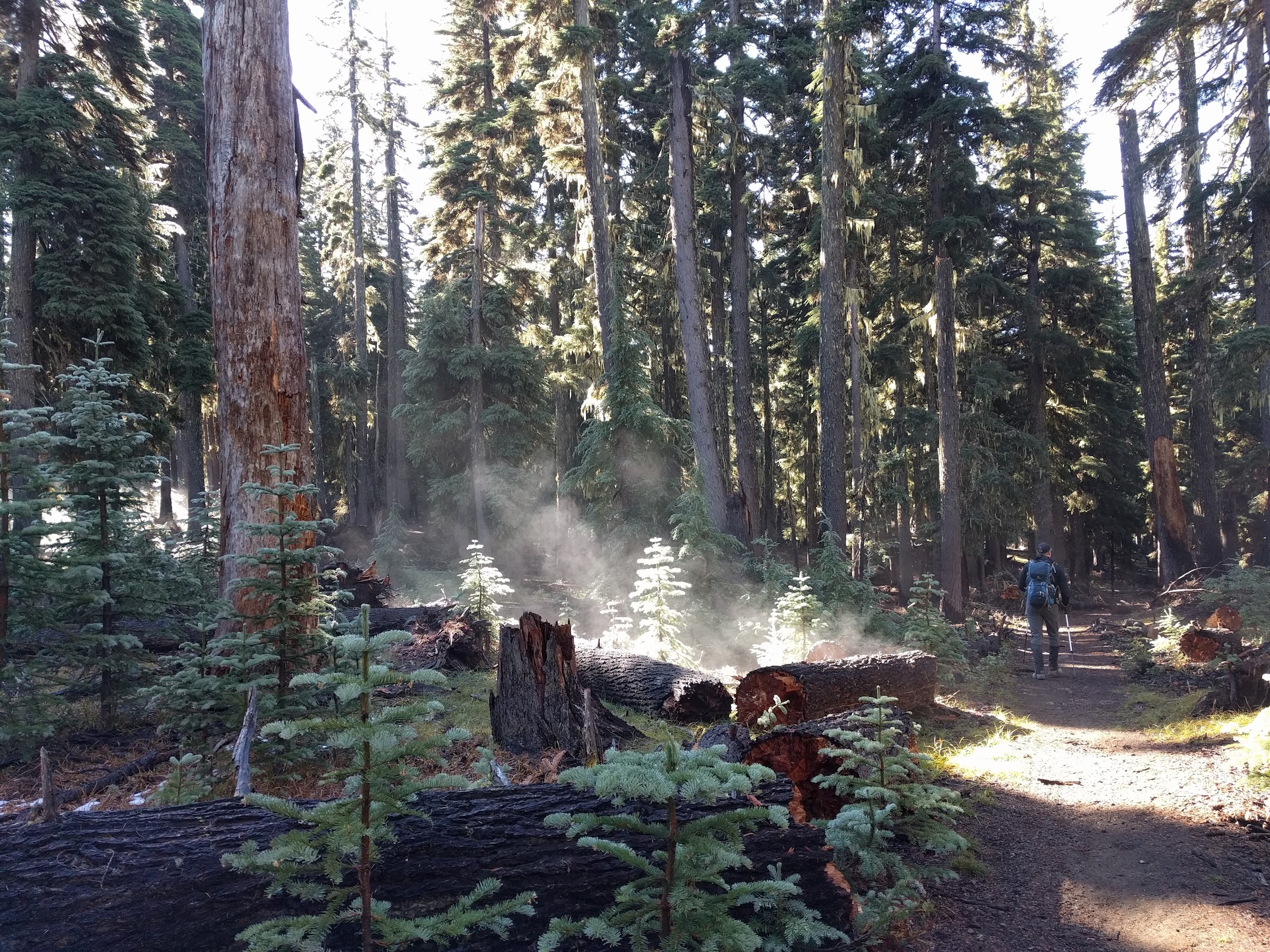 So many Southern Oregon peaks have been on the edges of my radar, but I haven’t made too much of an effort to get down there. The way Sullivan describes the Union Peak hike in his book makes it sound like one to skip. So I knew we would find some peace and quiet here.

The long approach on the mostly flat PCT would have gone by more quickly if there weren’t so many cool trees to stop and look at. Many of the trees, maybe hemlocks (?), had multiple trunks and interesting features. We had to climb, play, and photograph before moving along.

It was still fall but there was snow up in the hills already. The slog on the PCT was mostly snow-free but once we reached the Union Peak trail we started crunching through the white stuff more often than not. Eventually we popped out in a meadow with a view towards the rocky pinnacle of Union Peak. Finally, we could see what we were in for.

After a snack break, we continued along. As Aaron scouted a nice viewpoint, I had to re-find the trail in an indistinct section. Before long we were starting the switchbacks that climbed up this steep hillside. While the trail sign warned us of “the steepest trail in Southern Oregon!” we enjoyed the nicely graded pathway that clung to the rocky wall.

All along we basked in the bright sun and had endless views of the countryside. In the last 15 feet of the climb, the trail was completely obliterated so we carefully picked our way up in the simplest way possible. The exposure was enough to remind us to really pay attention. The snow on top of the rock made it just slippery enough to feel like an adventure.

From the top, perfect views. Peace. Quiet. The kind unheard of in a National Park. We felt incredibly lucky to be there.

The hike down was just as mindful as the way up, making sure not to slip on the snow-covered rocks. And when we got back to the car, well, we still had some exploring to do! 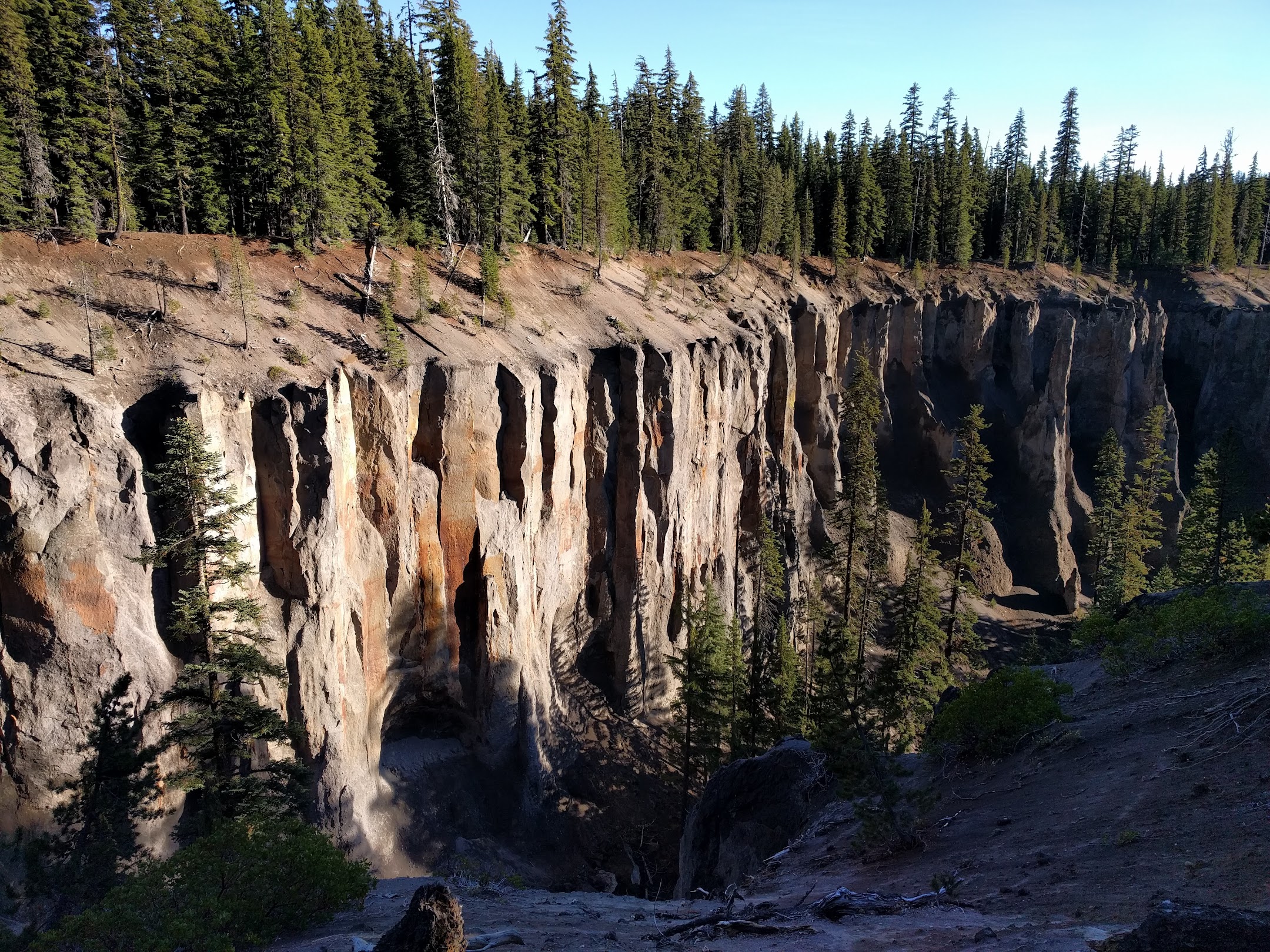 We were in the southwest corner of the park, so next we hit up the Godfrey Glen Trail. This hike sounded much more interesting than it actually was, and if you’re pressed for time, I’d recommend skipping it altogether. To be fair, it does get close-ish to some cool ash structures, but the viewpoints aren’t great. So you feel like you’re next to something really cool and you can’t quite get a good look. Shocked that this is listed as a wheelchair-accessible trail. You’d better have off-road tires on your wheelchair and a buddy if you want to take this one on. Or maybe there’s a community of badass wheelchair users that I’m just not aware of. 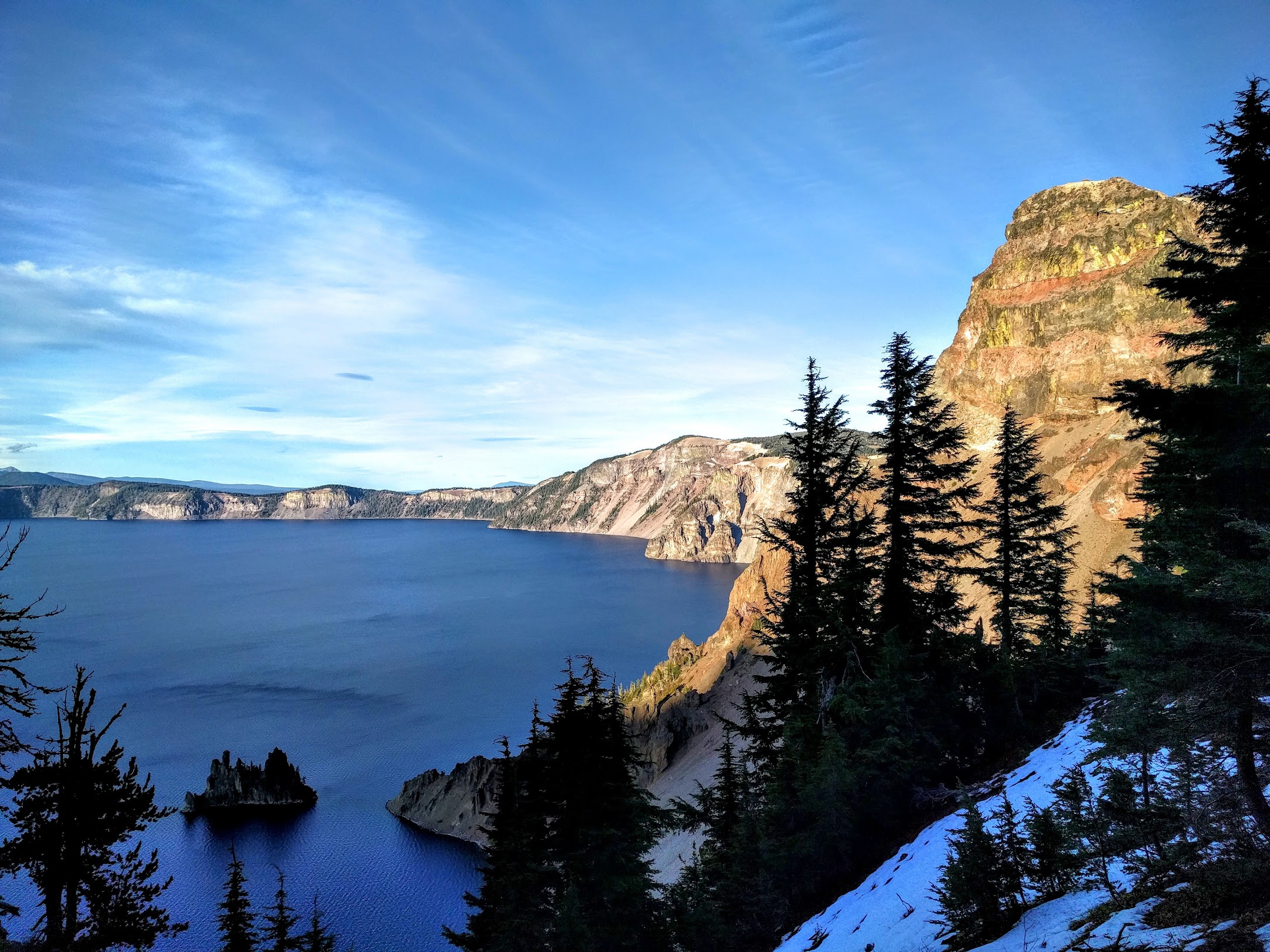 On to the next viewpoint hike. This one was fun. And also, comically, rated as wheelchair-accessible. I’d be terrified on some of those slopes. Gosh, maybe I’m just a big weenie? I dunno. This hike climbs up from the parking area to several beautiful views of Crater Lake. Since this one is on the main drag, you will be sharing the trail with lots of characters. Prepare.

We kept puttering along, checking out all the viewpoints to find a good spot to watch the sunset. While Aaron was busy capturing the majestic golds, yellows and pinks as the sun dropped behind the lake, I was taking this SWEET photo of our adventure-mobile. 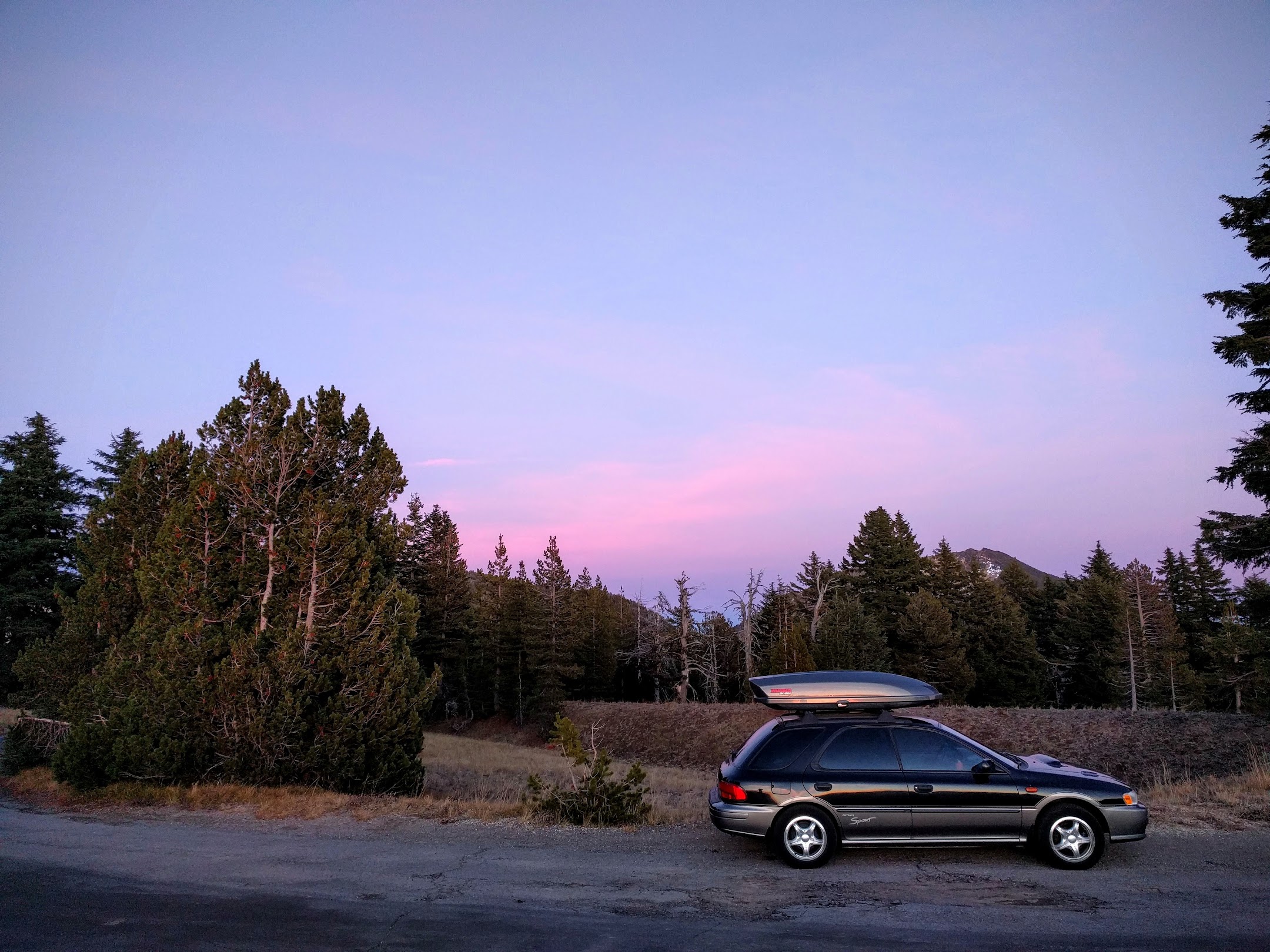 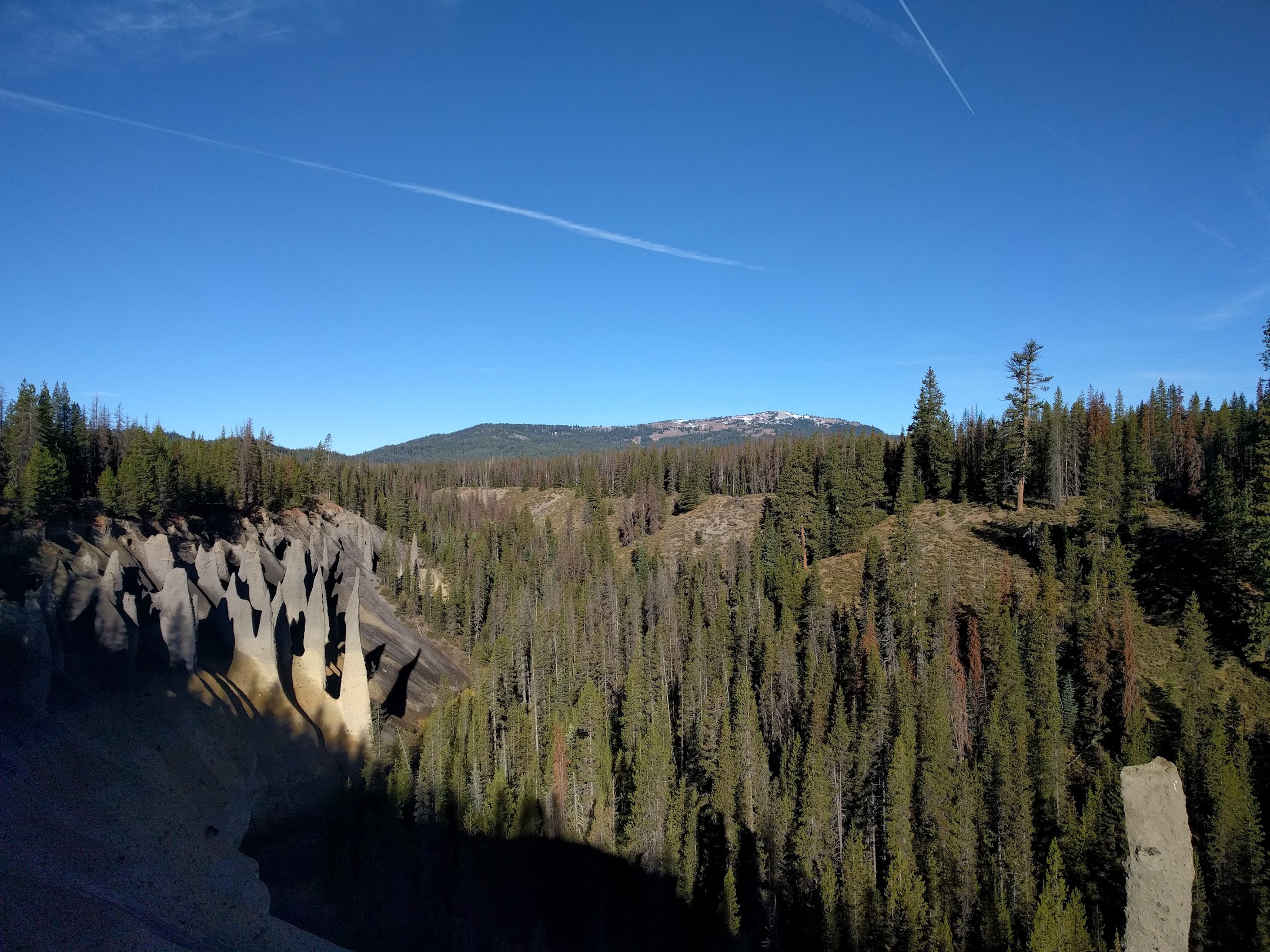 Now this is the hike to do to see the ash spires. We went early in the morning, so none of my photos do this hike any justice. You’ll just have to go see for yourself. The easy trail edges right along the top of the canyon, where you can see the impressive towers coming up on both sides. It also gave us an excellent vantage point of Mt. Scott, which we’d take on next. 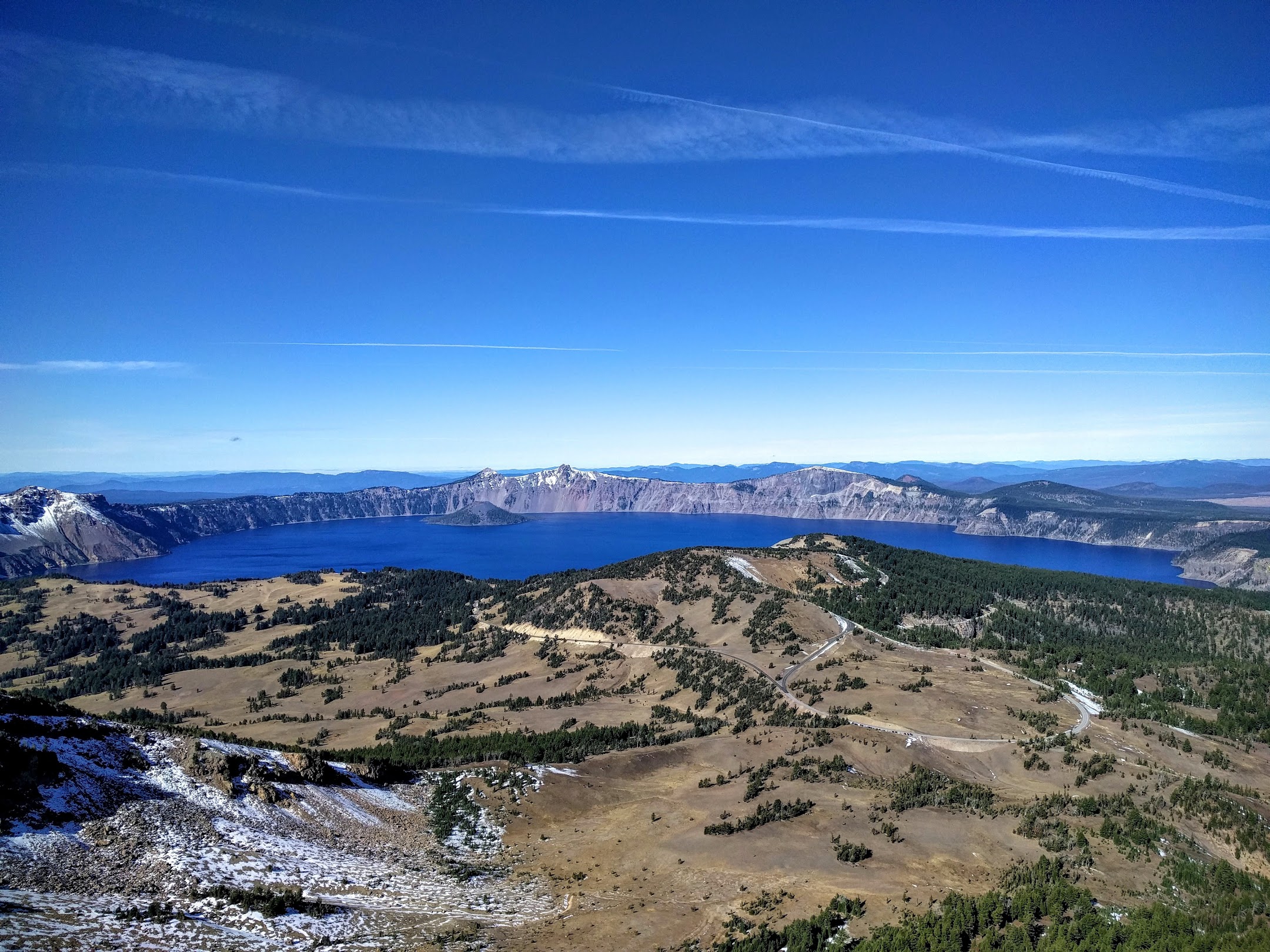 Mt. Scott is the highest point in Crater Lake National Park, it offers a view of the entire lake, the trailhead is right on the main drive, and it’s less than a 5 mile roundtrip. So as you can imagine, you’ll be sharing this trail with some people.

Actually, most people walk up the trail 20 yards or so, take a picture, and then get back to the car before their lattes get cold. So it’s actually not as bad as you’d expect it to be.

It was a chilly but sunny morning that we headed up to Mt. Scott. The trail was beautiful, crossing a pumice plain and some pockets of forest before making the ascent to the lookout tower. The twisted whitebark pine stood as evidence to the extreme weather conditions the native plants and animals must survive here. The trees were simply gorgeous.

Near the top the forest thinned dramatically and we were exposed to all the wind. The final stretch crossed a ridgetop leading right to a fire tower. There, some hikers were discussing some of the must-see places in the Cascades. We skirted by the conversation, found a quiet spot out of the wind and enjoyed snack time with views of the lake.

I didn’t get to all the points of interest I wanted to see on this trip, but we bought an annual pass to encourage more visits over the next year. There are still a few highpoints in the park I’d like to climb, and the west rim was closed for road repairs. While many online reviews list Crater Lake National Park as a half day trip at the most, I’m excited to spend more time on the ground adventuring around this beautiful landscape.