See all the photos here.

Karen, Sue and I left Portland early to get to the Wallowas by mid-afternoon. This would be Karen’s first backpacking trip. Our plan was to hike into the wilderness via the Tenderfoot trailhead and set up a base camp near Bonny Lakes or Dollar Lake. From there, we’d have two days of hiking to explore the surrounding basin and peaks before packing it up and heading out on day four. 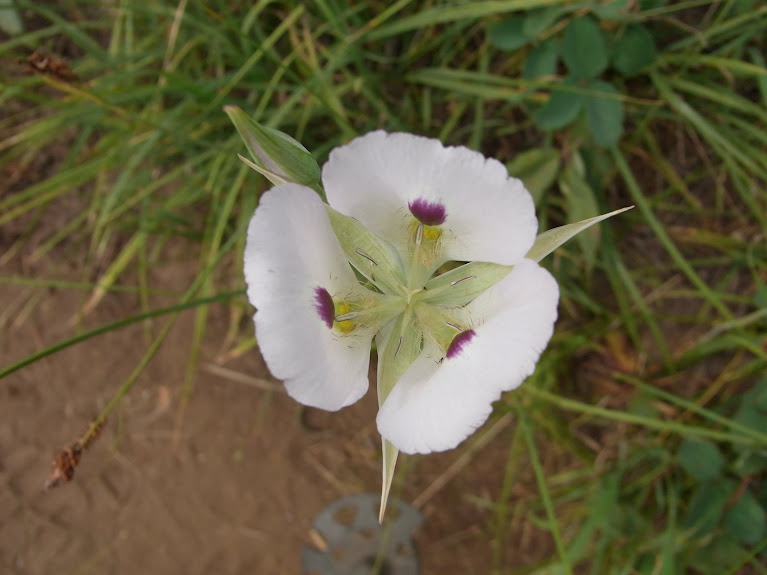 The walk in to Bonny Lakes followed a mildly graded, dusty trail suitable for horses as well as backpackers. There were several small stream crossings, most of which came equipped with a fallen tree suitable for hiking across. As the trail climbed gradually through the trees, we passed through several meadows filled with lupine, mariposa lilies and many other colorful wildflowers. The skies above turned from blue to gray, and thunder rumbled softly in the distance. In two hours or so, we reached Bonny Lakes. The lakes were located in a wide marsh surrounded by areas of trees. The lakes were thick with mosquitoes, so we moved on quickly. At this point, the thunder had gotten considerably louder and more threatening. Each time we crossed a meadow we worried about lightning. Although we had hoped to make it to Dollar Lake today, it looked like it wasn’t in the cards for us. So, we found the next sheltered flat spot that looked good for a camp and pitched our tents. Pre-dinner entertainment consisted of a short walk to the edge of a small canyon, where we sat beneath a big tree and watched the lightning show. Once we had enough of that, we retreated to the perceived safety of our tents to wait out the impending rain.

I remember dozing in and out of sleep as the storm crashed down upon us. During a short break in the rain, we extracted ourselves from our tents and Sue prepared dinner: chicken and crunchy rice :). All night, the storm raged on. Bright explosions of lightning, loud bursts of thunder, and giant drops of rain pummeled our camp. I awoke several times during the night hoping it would all go away by morning. 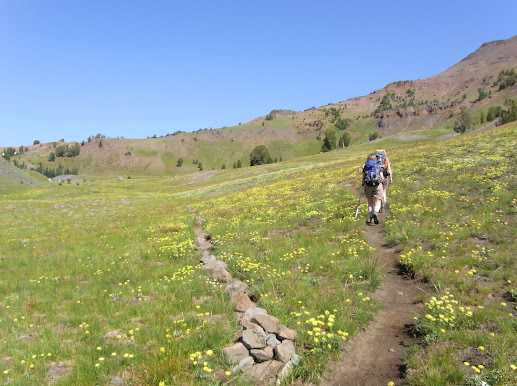 My wishes had come true; I lazily got up and out of the tent to cool, clear skies. After breakfast and a water-filtering session, we walked with lightened loads towards Dollar Pass. In no time at all, we found ourselves at the pass, taking in the beautiful, wide open scenery the Wallowas had to offer. From here we had a good view of the day’s target, Pete’s Point. Pete’s Point sits atop a fortune-cookie shaped mountain that harbors huge, steep scree fields on its inner walls. We decided to trek cross country to reach the base of the ridge. After an hour or so of some convoluted ups and downs we spied the trail again. Crossing over the trail, we made a beeline for the base of the ridge. Our travels took us through some stunted evergreens, then out onto an ascending, rocky meadow. We followed several faint climbers’ paths along the way, all of which disappeared into the surroundings after several yards of walking. Once on the ridge proper, the path was easy to follow. It was here that we left Karen, who decided to hang back and put her camera to work. Sue and I continued up the ridge. It became rockier and slightly steeper as we climbed. The views improved with each step and each breath of air. Soon we could see Aneroid Lake. Then we could see more mountain tops. And, the elusive Dollar Lake. The ridge was wide enough to quell any sense of exposure. 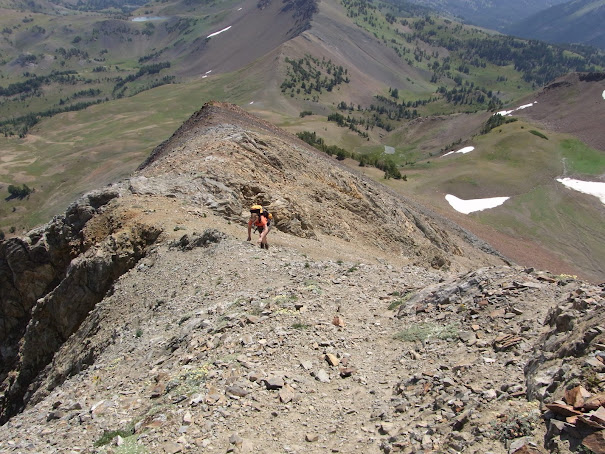 As we scrambled up the ridge, I heard some rockfall from the scree bowl. Scanning the bowl for a source, I saw a mountain goat! Sue and I watched the goat as it walked up towards the snow, then traversed towards the summit and finally down into a small, rocky outcrop. The goat was amazingly nimble on the unstable rock. We used our second-rate human biomechanics to finish ascending, only needing to use our hands once or twice; it was not much of a “scramble.”Once atop the summit we searched for a register, but to no avail. I basked in the 360 degree views of the colorful mountain ridges splaying out in all directions. I’ve got my work cut out for me to get to the tops of all of these mountains.

Concerned about the threat of thunderstorms passing through while we were stuck up here on a long, open ridge, we headed back down to meet Karen. This time, we took the trail back to Dollar Pass. It wandered all over the landscape, searching for the most easily graded pathway from A to B. Back at the pass, we took a sharp right and walked over a stark red landscape to reach Dollar Lake. The rain clouds decided to hold back for the afternoon, so although it wasn’t warm enough to jump in the lake, it was nice enough to hang out and relax. 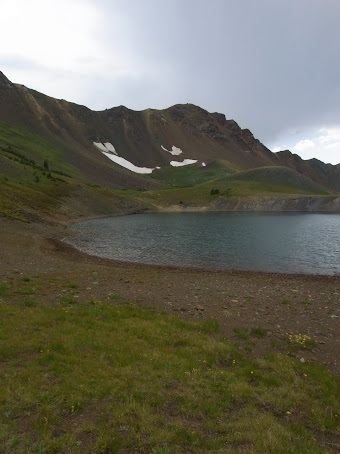 I played around with my new camera, taking extreme close-ups of some pretty flowers. While looking around I noticed a shell imprint in one of the rocks between my feet. A fossil! That discovery spawned an hour or two of looking at rocks all along the lakeshore. Among the three of us, we discovered a variety of different shell fossils as well as a few we couldn’t figure out. The geology of the Wallowas is amazing. Not only are there lots of sedimentary rock bits, there are also areas of volcanic as well as metamorphic rock. The next time I return here I want to bring a geologist with me.

After we had our fill of R&R, we made the short trip back to camp. Dinner tonight was provided by Karen and REI: Chicken Pad Thai and Kung Pao Chicken. The pad thai, I thought, was especially tasty. The sky occasionally grumbled and belched thunder but the rain never came. We enjoyed a nice evening of card games before returning to the tents. 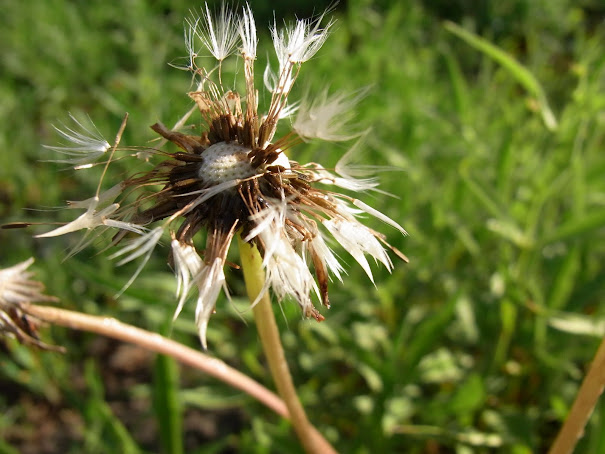 Today I was the one to get up early. It was chilly and damp. The skies were mostly gray. I walked around looking for opportunities to take photos of cool things. There were plenty of opportunities. Once Karen and Sue joined me for breakfast, we packed up for another day of adventuring. At Dollar Pass, Sue and I ventured up towards Aneroid Peak; Karen descended to the lake. The scramble up to the peak involved lots of steep meadow walking and rock-hopping. We stopped frequently to catch our breath as the terrain became steeper and steeper. Towards the top, sections of vertical rock make it look like a fortress. I scanned the rock for the best way up and settled on a fairly solid chimney that appeared to take us to the top. 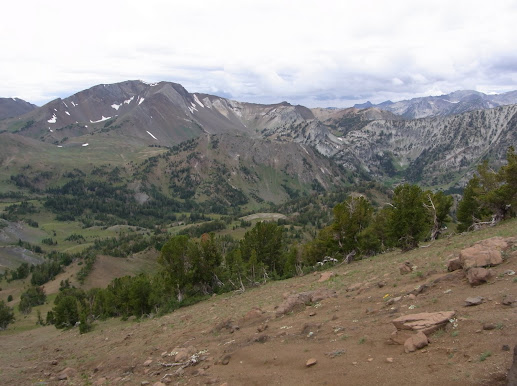 As I burst up from the top of the chimney I looked ahead at the actual summit, just a short way down a mellow ridge. Sue followed closely behind and before long we were signing the summit register and eating victory chocolate. We looked down at a low cloud layer and up at a thicker cloud layer. The surrounding summits poked in and out of the amoeba-like clouds. A peal of thunder interrupted the quiet and caused us to pack up and go down in a hurry. Rather than descend through the chimney, we walked a little to the right and negotiated an easier, wider rock band. Sue took off down the hill towards a flat bench, where we’d decide how to proceed to the lake. I got distracted by some interesting flowers, including maroon and yellow paintbrush, eventually meeting her at the bench. By then, it had begun to rain.

We figured our best bet was to head towards the trail, as low clouds were rolling in and the terrain between the bench and the lake looked dense and cliffy. Once back on the trail, we walked through scattered rain showers to the lake. We passed 5 people on horseback along the way–the only people we’d seen since day 1.

Once we located Karen, she directed us to a beautiful, stout hiker’s shelter on the private property along the lake. Apparently, as she was lollygagging around the lake taking photos, she’d met the caretakers of the property on their way back in from town. They got to talking, showed her where the shelter was, and invited her to make a fire in the wood stove! Although Karen didn’t have any matches, I was happy to offer up any one of my three methods of making a fire! For several hours, we sat on log stumps in the shelter, warming up by a roaring fire, and watching the rain. The timing was perfect. 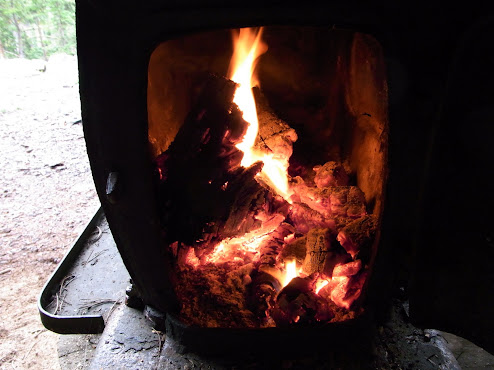 Just before 5 pm there was a break in the rain, so we decided to run back to camp. We didn’t avoid getting wet, but luckily we only had a few miles to go. Cold, wet and hungry, we decided to make a quick dinner and then dive into our tents. Tonight’s menu included my home-dehydrated treats: vegetable couscous curry and cheesy potatoes. We couldn’t get into the tents soon enough. It would be a long, long night. I played Tetris on my phone for about an hour. It was still daylight, but the rain had started up again, making the sky dark. I slept on and off all night, listening to the pat-pat of rain on my tent all night. 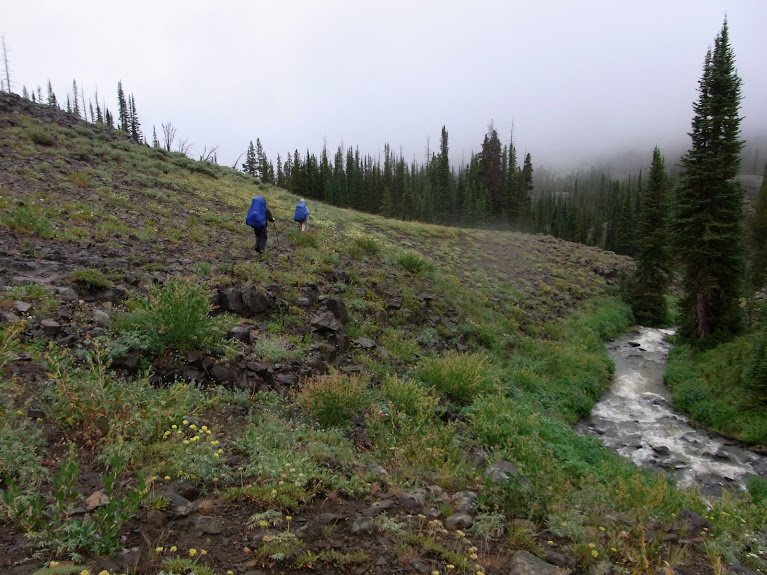 The steady rain showed no sign of stopping. We heard a loud, dramatic rockfall on one of the nearby mountain slopes. The weather was definitely taking a turn for the worse, and at least it had waited until our last day to do that. After laying in the tents for a couple of hours we decided to pack up camp and brave the rain. There was little conversation the whole way, as we were all intent on getting to the car and changing into some dry clothes. We made a quick water filtering stop at the first clear stream we found, as “our” stream was running thick and brown today. The wildflower meadows were glistening with water. The clouds drifting through the valley had their own special beauty. The landscape was much different than it had been just a couple of days ago.

The Eagle Cap Wilderness in the Wallowas is an area that just begs for more exploration. I will not forget the huge, expansive landscapes, countless peaks, unique wildflowers, and quiet solitude. I had a great time with my good friends on this backpacking trip and look forward to my next opportunity to wander in this pristine environment.