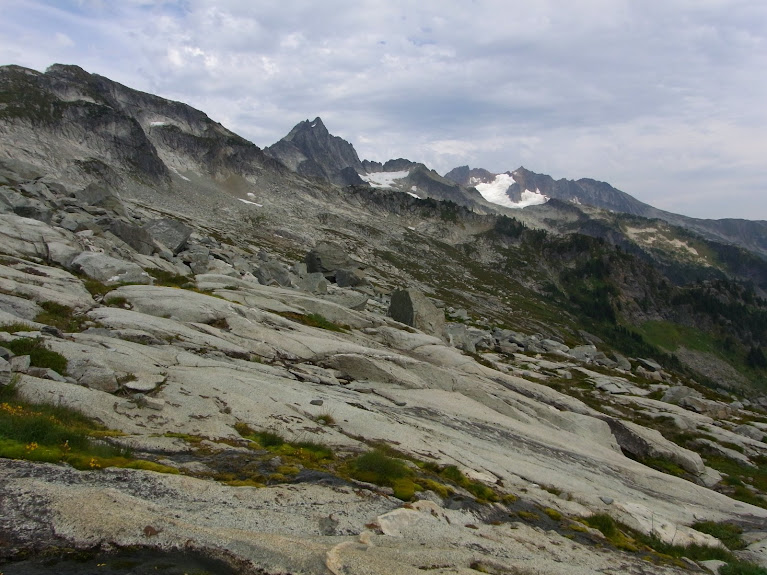 For my last hoorah of the summer, I headed out for the long drive with a small bunch of Mazamas for a climb of Austera Peak. After a hearty breakfast in Marblemount and a gear weigh-in at the trailhead, we started the uphill trudge at about noon on a clear, but direct climber’s path. It was a hot afternoon, and I was soon drenched with sweat under the weight of my pack. By the time we reached the edge of the trees, we took a short snack break; the mosquitoes and biting flies feasted on us as well. From here, we crossed two wide boulder fields and watched the marmots congregating on top of the rocks. The boulders dumped us off into an alpine meadow strewn with rocks and streams, reminiscent of Boston Basin, our next-door neighbor. At the top of the meadow we took a break to pick and eat fresh huckleberries. We then continued over a short, steep drop that put us at a slabby ramp leading up to the glacier. We passed a team of climbers camped out on the slab; what a fabulous camp! There were great views of the surrounding peaks as we put on our crampons and roped up to cross the Eldorado glacier to our camp, another hour or so away. Preston navigated over and around several crevasses to get to a broader, flatter, and less cracked up section that was more of a slog. By 6:30 we made it to a rocky col at the base of Eldorado. Two tents were already set up here, so we set up on either end of the camp area, then quickly put on layers and made dinner. The wind was blowing and the temperature dropping, but after a long, hot day, it was almost welcome. 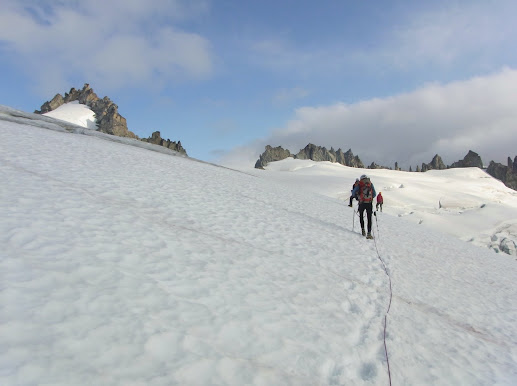 The next morning, we slept in a bit waiting for the clouds to roll out. It had rained for most of the night, and the forecast predicted better days ahead. Sometime before 9:00 we roped up and set off across the Inspiration Glacier. Preston and Tim swapped leads as they picked the best way through crevasses pointing in every which direction. I was happy with my position in the middle of the team. This was the first time I’d been roped up on a glacier in probably two years. It was a pretty sweet team, though. I’d climbed with Chris and Linda before, and had great experiences then. Tim and Preston were quickly proving to be friendly and competent leaders. Tim was extra good at pointing out stuff that I’d forgotten about glacier climbing as well as dropping a few nice tips here and there. Again I felt like the weakest link in the group, but that meant that I had a wealth of knowledge to draw from. Not only was this trip very fun but I feel that I learned quite a bit.

The route follows a gently rolling, 1.5 mile line across the glacier, beneath the Tepeh Towers to Klawatti Col. As we strolled along, the clouds began to drift away and the sun’s rays picked up in intensity. A few layer changes later we made it to a short rappel that admitted us on to the Klawatti Glacier. Another hour of walking brought us to a crumbly rock band. We took off our crampons and scrambled to a viewpoint that the “Selected Climbs” book recommends as a stopping place. We ate lunch here and marveled at the tremendous views in all directions. The weather had been very nice to us today! The group decided to continue across “loose and unpleasant going” to get to the actual summit, just a stone’s throw away.

We scrambled over to a notch and then roped up to simulclimb the last pitch to the top. There were just a few wide, airy moves to make and the rock was relatively sound. The five of us scrunched together for some obligatory summit photos before turning around and heading back to the viewpoint.

By then it was past 1pm so we decided to go straight back to camp without hitting any other high points today. We retraced our steps back down the rock, across the snow and to the place we’d rapped down from. That meant we had a short rock climb to get back to the top. With an alpine pack on, my favorite. Preston led the pitch and belayed each of us up individually, as these moves were more technical than those on Austera’s summit pile. Once everyone got to the top of the pitch they put me at the front of the rope for the journey back to the tents. Yikes. At least I basically had to follow our footsteps, I could do that. We continued to roast in the afternoon sun as I retraced each print in the snow all the way across the glacier. At one point we veered off to try and avoid a nasty section of crevasses. I kept checking back with my team to make sure I was making the right decisions but of course I was the one with the best view so there wasn’t too much they could do for me. I was happy to have skirted by the last big crevasse as I made a beeline down hill towards our tents. Although marginally scary, it was a nice opportunity for me to be positioned at the front of the rope.

After laying out all my gear to dry and having a quick snack, I found a soft, sandy spot to do a thorough job of stretching. After that, I had a tasty dinner and went to bed by 8 pm. 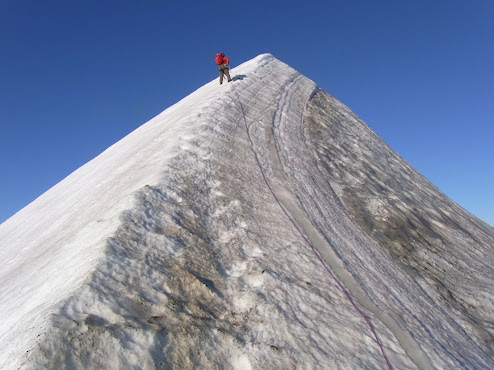 Preston, Tim and I got up at 5:30 am to do a quick ascent of Eldorado before packing up camp and hiking out. It took us about an hour and a half to make it to the summit. We began by climbing up some steep snow at the edge of the boulder pile, then hopping on to the boulders for a while, and finishing up the route on the snow. It felt like we moved really slowly as we kicked steps up to the summit ridge. As soon as we made a left turn on to the photogenic knife edge, the wind pounded across the snow and dropped the temperature several degrees. The wind made walking the thin ridge just a little spicier, but before long the snow died out onto a flat carpet of rock. I put on my down jacket and remembered to eat the summit Snickers bar I’d had nestled n my pack for at least 3 summits. Yum. Preston and Tim busted out the area map and spent the next forty-five minutes identifying every peak in view. I worked really hard to get Mt. Baker and Glacier Peak straight; that’s about all my brain could handle after just two trips in this area. On the way back down we spent more time on the rock than snow. Back at camp, we found Chris and Linda rearing to go.

The hike out followed the same route as the hike in. It was still really hot and just as brutal on the knees. I was constantly hungry and thirsty, no matter how much water I drank. I stopped to take some pictures of flowers on the way down, and we made more huckleberry picking stops as well. But we all knew there was still a 5 hour drive to Portland once we reached the cars so we tried to keep it moving.

Throughout the whole weekend, we encountered only a small handful of people. It felt remarkably pristine and remote. From all points on the glaciers there were mountain ridges and volcanoes stacked up all the way to the horizon and beyond. Jagged, rocky spires poked up above neatly folded and fractured sheets of ice and snow. Admission to this glorious trip was, literally, steep. I was grateful for putting all the work into rehabbing my knee last summer so I was able to tackle these peaks this summer. I am already thinking about which peaks from the North Cascades to add to my to-do list. Thanks to the team for making this a truly enjoyable climb.