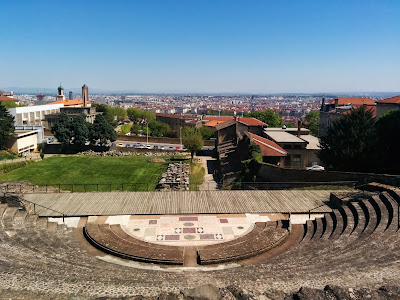 We took the train south from Paris to Lyon, one of France’s largest urban centers. Lyon is also famed for its cuisine and ancient Roman ruins. With a day and a half to spend, we had a lot of ground to cover. The first afternoon took us to the park. On the second day, we visited 2 cathedrals and the Gallo-Roman museum, then explored the traboules, stairways and side streets of the old city before finishing up with a traditional bouchon meal. 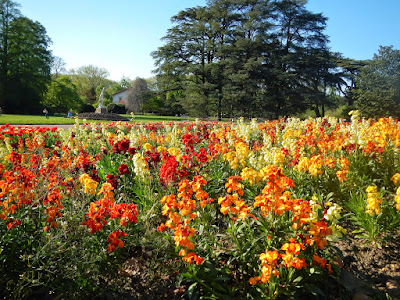 Lyon made a tremendous first impression on us with this sprawling, magnificent park. The park is divided into several sections, and includes a lake, walking paths, rose gardens, greenhouses sports fields, and a zoo. Everything was free, including the zoo, so we began with a relaxing stroll to see the animals. For the next several hours, we explored the park. Along the way we found a war monument, a Mediterranean garden, a urban beekeeping display (including some very busy hives), families of geese, and a huge iron gate. It was a lovely park with something for everyone. 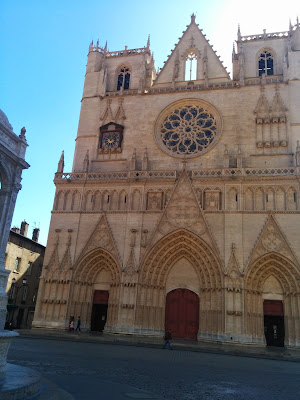 Surprisingly, we hadn’t gotten enough of being in churches yet, so we visited a couple more. The Cathedral of Lyon, or Saint Jean-Baptiste Cathedral, was located near a small square in Vieux (Old) Lyon. It was hard to believe that this structure was built in the 14h century. It’s sturdy walls, built in the Gothic style, had a stern presence over the square. We timidly opened the huge doors to take a peek inside. The interior was beautiful, with stained glass and flickering candles playing with light and shadows. Carefully carved stone highlighted an acute attention to detail. Downstairs, a treasury held many priceless artifacts from the church’s past, including gold ornaments, robes, and items used to celebrate mass. It all felt very lavish. 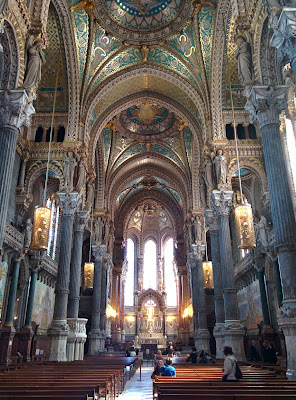 A short but steep walk up the hill took us to the Notre Dame. It seemed like every city had one of these churches dedicated to Mary. It was very windy on top of the hill so we were happy to duck inside. The interior was grand, with spectacular mosaics decorating the walls. Gold sparkled from every corner of the walls. Every square inch of the place was ornately adorned, including the ceiling. Rule #1 for traveling in Europe: never miss the opportunity to visit a church. Each one was spectacular in their own right. We spent what felt like hours investigating every corner of the magnificent building.

One of the most modern buildings in Lyon stood in stark contrast to one of the oldest. The Gallo-Roman museum, built seamlessly into a hillside, was a stone’s throw away from a rare pair of ancient Roman theaters. The museum contained artifacts uncovered in Lyon and surrounding areas, like statues, grave markers, lead pipes, pottery, and mosaic tile floors. For a measly 4 Euro, we had access to the entire collection. A friendly woman at the front desk set us up with free English audioguides and we were on our way. 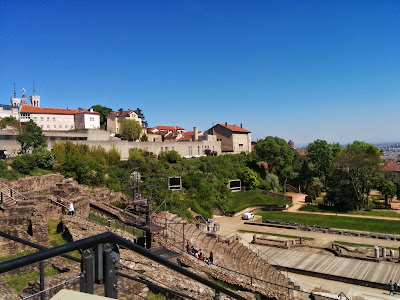 After exploring the museum, we walked around the remains of the theaters. The lower portions were in really good shape, and were still apparently being used for festivals and shows. The upper portions were more wild and rugged and interesting. Our feet were pretty tired from this point, so we cut our explorations short and headed back into town.

All over Lyon, there are secret passageways snaking through the old buildings. These passageways are called traboules. I’d read about them in Rick Steves’ book so we thought we’d try and find a few. 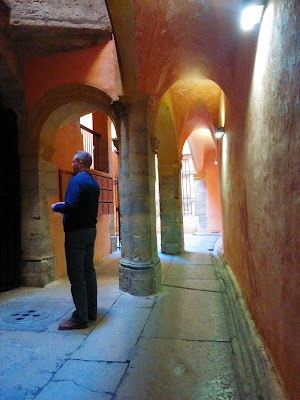 Most of the traboules were private, but a few were open to the public. Shiny plaques hung on the walls in front of some of the more prominent traboules. We pulled open a few doors near these plaques to investigate what traboules looked like. As we expected, they were like private hallways leading to interior entrances to apartments, stairways and businesses. Some were colorful, well lit and decorated. Others were dark and narrow. Some were open to the sky above, and others were totally enclosed. We popped in and out of a few of these, and an old French woman motioned for us to follow her into another one. We did, and then sort of followed her around town, watching her every move, to find more traboules. She appeared to have a map in her hand, like she was looking for treasure. We hadn’t done much research, so we were happy to have a little guidance along the way.

Our first experience of eating in Lyon fortunately did not set the tone for the rest of our stay here. I’d read about the food scene in the city, and its famed bouchons. These were small, traditional, family-run eateries that offered lots of simple and hearty dishes for a reasonable price. I happened to notice that our hotel was pretty close to Chez Georges, which was very well regarded on the travel websites I’d visited. We walked in a little after noon, and were greeted in French. “No, we do not have a reservation,” I stuttered as best I could, and was afraid we’d be turned away. But, we were seated at a long, communal table (no one else was seated there) and left to think about what jerks we were for coming in off the street.

I struggled to read the daily specials board, not because it was in French, but because the the writing was illegible and chalk was half smudged off. When the waiter came back to ask what we’d like, I asked for water and 2 daily specials. Any follow-up questions he asked me were followed up with shoulder shrugs and Je ne comprends pas. I think I was starting to sweat.

Eventually, we were brought a couple of dishes in succession. They were delicious, and we enjoyed them, but I felt we were missing out on something. Everyone else in the restaurant was brought out these communal steaming casseroles to try. I vaguely remembered reading about the shared-dish concept online, and regretted that I had no way to ask if we could have some of what were they having. Total French fail.

Although our waiter was very nice, he spoke very quickly to my slow French ears and I felt awful that I was completely paralyzed and unable to talk back. I couldn’t wait to get out of there and never wanted to embarrass myself like that again. Fortunately, Aaron’s the type of guy that just rolls with the punches, and assured me that I was much less of an ass than I felt I was.

Our last meal in Lyon was the complete opposite. After walking down a street in the old city, reading menu boards outside a few bouchons, the proprietor of one restaurant poked his head outside and said Bon soir! Entrez! or something to that effect. We shook our head and kept walking, when suddenly Aaron decided he wanted to go back there.

When we walked in, there was one family eating dinner in the corner. The other few tables were empty. He sat us down, gave us the menu and greeted us again in French. He had a kind face and a nice smile and we immediately felt comfortable there. I squeaked out a few basic French phrases and pleasantries, ordered our meals, and was feeling quite proud of myself. When the waiter came back, I realized I’d mistakenly ordered not a glass of wine, but an entire bottle. For me. Aaron doesn’t drink. 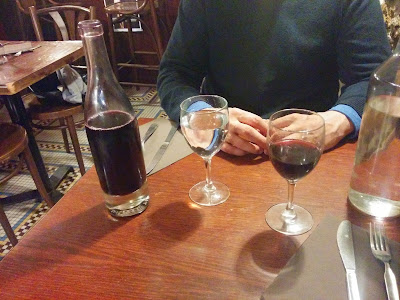 Working quickly to down a couple glasses of wine, I was thrilled when the first course came out. We had a delicious Lyonnaise salad and some sausage-in-bread thing to get us started. Then, we received the main course: a quenelle for me and a huge sausage for Aaron. An iron skillet full of roasted potatoes was our shared side dish. It was all delicious. The waiter patiently and slowly explained to me that the quenelle recipe is traditional, not like those trendy huge ones the touristy restaurants have, and asked us how the food was. He then indicated that it was cash only, and I was grateful that I’d taken enough Euro in my purse that day, or we’d still be doing dishes right now. 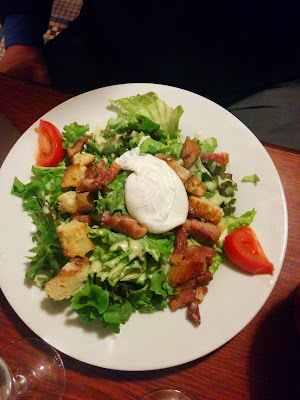 Overall, Lyon was a lovely town to see on foot. There were more than enough sights to see in the couple days we had, and if we’d had more time, plenty of shopping to do. There were excellent restaurants and food vendors on every street corner, although we often felt overwhelmed by choice. My lesson: make reservations if you want to show up to a well-known establishment, and forgodssake learn how to order like the locals do.