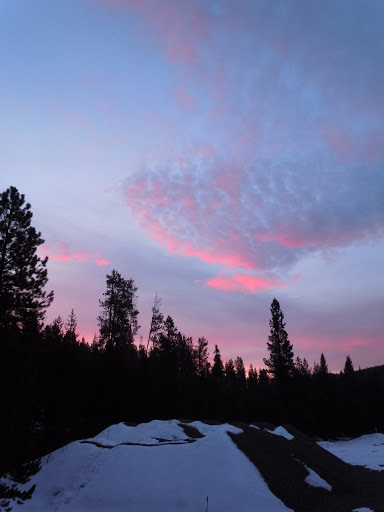 I awoke to morning temperatures below freezing; a pink-blushed sky illuminated my forested surroundings. Driving into camp in the dark, I had no visual of my location. I couldn’t have been more surprised if I’d woken up in the midst of a theme park or a sandy beach. I had trouble getting my camp stove to function well at this temperature, but I was able to keep it running long enough to boil my oatmeal. After a quick breakfast I broke camp and drove into Granite. 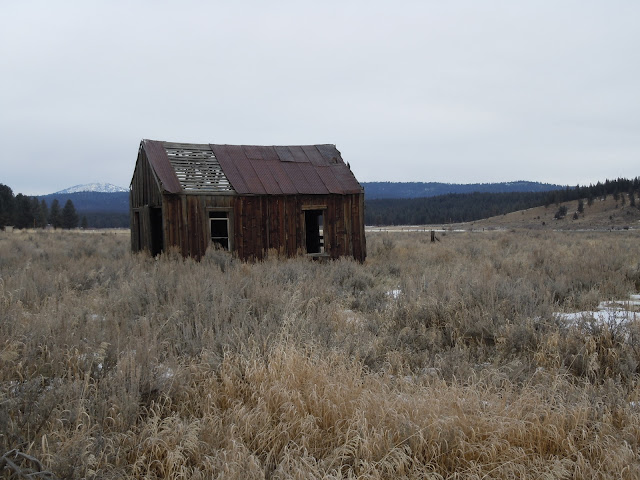 I’d checked out a “Ghost Towns” book from my local library before departing on this trip. Today was intended for exploration of these lost towns. As I drove into Ghost Town #1, Granite, I found several modern buildings with smoke coming out of many of them, and a person or two milling about outside. Some ghost town, I thought. I drove on to Sumpter, where I’d eaten last night, also listed as a Ghost Town. This was obviously inaccurate as upward of 100 people were currently residing there, and it had a range of services available for locals and visitors. My search for a real ghost town took me ultimately to Whitney, which fit my vision much better than the previous two towns. I parked at a signboard explaining the history and demise of the town. I walked up the gravel road, half frozen, taking pictures of the buildings in various states of collapse. I was disappointed, however, to come across a home with a solar panel array and a Direct TV dish! Clearly there was at least one part-time resident here. Two other homes showed some sign of occupation, although I saw no one else at the time of my walk.

Back in the warmth of my vehicle, I pressed on to Bates State Park, just opened this summer. The park was closed for the winter, but I parked outside the gate and wandered in. I vaguely recalled looking at a trail map online, seeing a small network of hiking trails that would make this a worthy stop. I regretted not printing the map, however, because there was no trail map or useful signage to be found anywhere. I wandered over to a frozen body of water and spotted a trail sign to my left. Following this trail brought me to several other trail junctions in less than a quarter of a mile. I tried to make the largest loop possible, but the terrain I covered was always in view of the road and the forest wasn’t terribly remarkable. Before long I was back at the car and I headed out of there. Yet another disappointing “new” park. Why spend the money, Oregon, if it’s not to create something worth visiting? I certainly would never pay to go there. 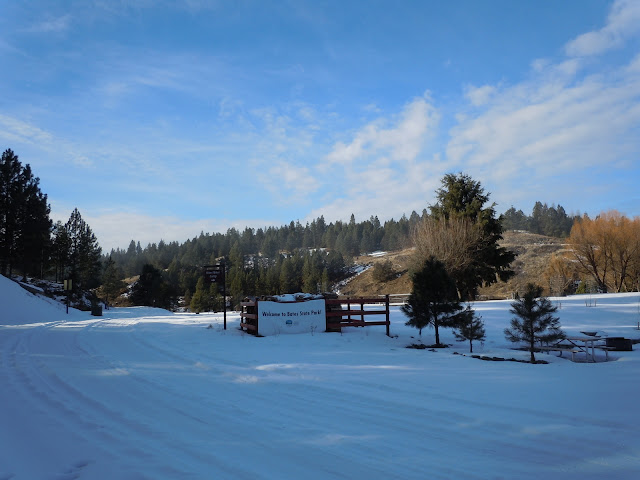 Echoes in the ice

I had no plans to stop before Vale, 88 miles away. I have always tried to keep an open mind on these trips, however, and my eyes constantly scan the road for brown signs. I noticed a pointer for Unity Lake State Recreation Site and decided to take a detour there. It was a large, flat, lake, and there didn’t appear to be any trails, so I almost ended up just getting back in the car. Instead, I found a set of steps leading down to the rocky beach beside the lake so I walked down to the edge of the frozen lake. Immediately I was bombarded by a strange sensation of noise that filled the air and that seemed to be coming from the lake. It reminded me of whale recordings, no, video games, no… I couldn’t pinpoint the quality of the noise. 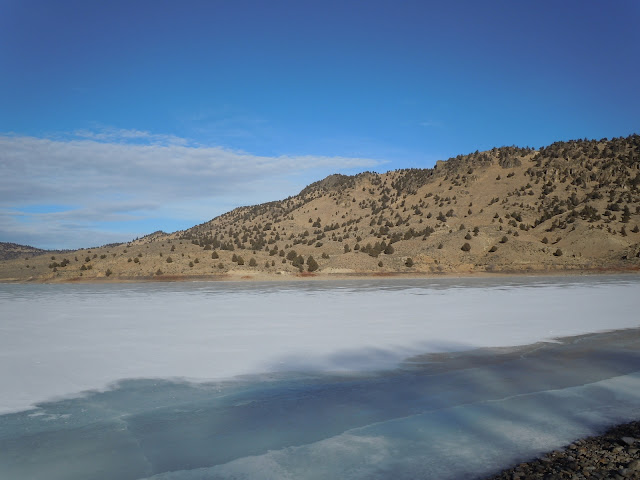 I continued walking along the edge of the lake, keeping my ears tuned to the chaotic music traveling through the winter air. Later I would read about this phenomenon on the Internet, and although my attempts at recording the noise failed, this guy succeeded.

As I proceeded, I found natural treasures that kept me exploring. Gorgeous, giant ice crystals grew on the lake. A massive oyster shell lay on the beach. Cliffs along the edge of the lake were striped with ancient soil layers. Cliff swallow nests made of caked mud clung to the striped walls. The lake itself kept coming up with novel sounds that surprised me. This was a magical place. In the past, I’ve made plenty of impromptu detours that turned out to be a waste of time; this was unexpectedly an excellent choice.

Looking at my rough itinerary, I found a free hot springs located close to where I hoped to camp tonight. Realizing I hadn’t brought a towel, I made it my day’s mission to purchase one before heading off into the boonies. The next “major” city on my route was Vale, a community of just under 2,000 people. I had hoped to pop into a few shops and parks just to stretch my legs and get a feel for the place, but most businesses were closed. There was a Dairy Queen and a drugstore open. I walked into the drugstore and asked the clerk if there was any place to buy a towel. He looked confused and asked a coworker, and they didn’t have any ideas. I gassed up and hit the road again.

Next I stopped in Nyssa, at a grocery store, to see if I could procure a towel. Nope. All I saw here were sugar beet and onion fields, and not much else. I asked the proprietors of a coffee shop where I might be able to get one, and they recommended Ontario, about 15 miles away. With over 11,000 residents and all the usual chain stores, this was my best and closest bet. Upon arriving in town I was overwhelmed with the choices, but I was unable to find a large department store. I stopped to ask for directions to K-Mart and the only person who could direct me tried to explain, in broken English, how to reach the store. I politely thanked her but the information was so garbled I couldn’t make heads or tails of it. Frustrated, I blasted back up one of the main roads and veered into a Rite-Aid parking lot. Unbelievably, they had a supply of bathroom supplies that included full-size towels. Perfect. 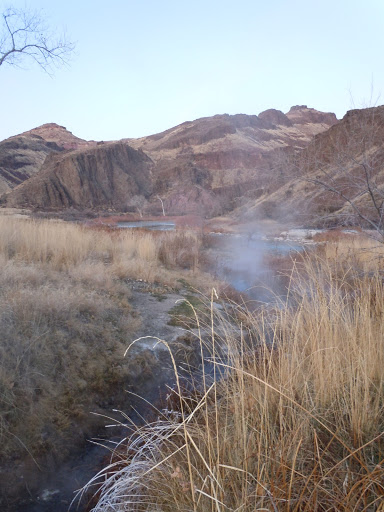 Endless driving, it seemed, took me down a winding road along the Owyhee River and finally to Snively Hot Springs. There was only one car there, and no one in the water. I was excited to sneak into the springs just before sunset, then head off to camp. I loaded up a backpack with water, snacks, clean clothes, and a towel. I could see steam rising from the inlet stream that fed the pools by the river. It looked like there was some attempt to corral the warm water into small pools bordered by stones. I reached into the pools with my hand to find one of suitable temperature, then waded in. I tried and tried to find a location that was deep enough to sit in and that was Goldilocks-perfect, but to no avail. The water went from skin-melting hot to ice-cold in a matter of millimeters. Soaked from the waist down, watching the sun and air temperature fall, I admitted defeat and retreated from the springs. I quickly toweled off and put warm layers on before getting back into the car and completing the drive to Lake Owyhee.

The campground there, of course, was closed. Even in the pitch dark it looked ugly and unpleasant. I backtracked along the road until I found a roadside pullout that appeared to have enough space to set up camp. I gathered what I’d hoped was enough dead sage to build a fire for the evening and hunkered down. The sound of the river rushing by was pleasant and I was happy with my lodging choice. I read by firelight as long as I could, then rigged up my sleeping cocoon. This time I took my big down jacket and wrapped it around my feet, since my feet were still a bit cold last night. Cozy.