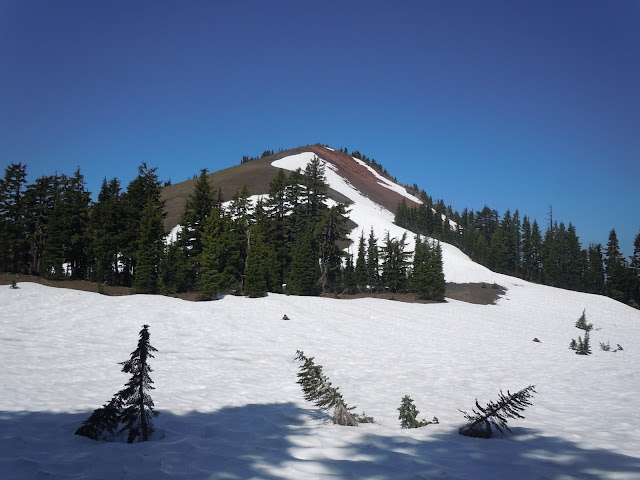 I started this hike at the Cabot Lake trailhead. The self-issue trailhead permit box was filled up with new-fangled Scantron sheets. Welcome to the 21st century, Forest Service! I didn’t like the impersonal feel of the new forms. I got a nice, early start, enjoying a cool breeze blowing through the large stand of burned trees. A thick and healthy undergrowth filled in the land between each blackened, pointed tree trunk. Burned areas, to me, have a special kind of beauty. 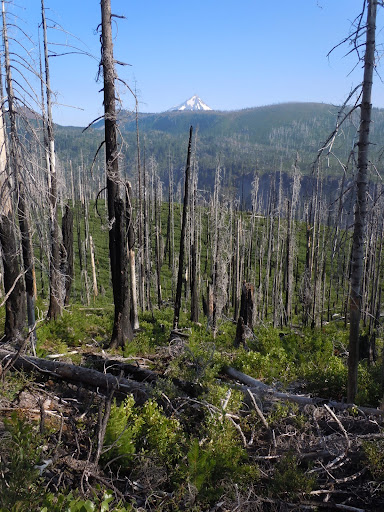 A couple of miles in, the trail enters a greener forest and passes by hidden Cabot Lake. I continued ahead past several small ponds to Carl Lake. There was a tent and some campers right at the edge of the lake–so much for the 100′ rule. I stopped for a brief snack and then continued along the south shore to follow the trail towards Shirley Lake.

Here’s where I made my first encounter with snow. The trail became muddy and disappeared between intermittent patches of white stuff. Since the trail was straightforward and easy to follow, I had no trouble staying on track. I started gaining elevation as I passed beautiful Shirley Lake. Patches of snow ran right down to the water’s edge, which somehow made the lake more picturesque. Another mile or so of walking through everything from deep snow to bone dry, hot dust brought me to the PCT junction. I turned left for less than a quarter mile before getting my first real view of South Cinder Peak. 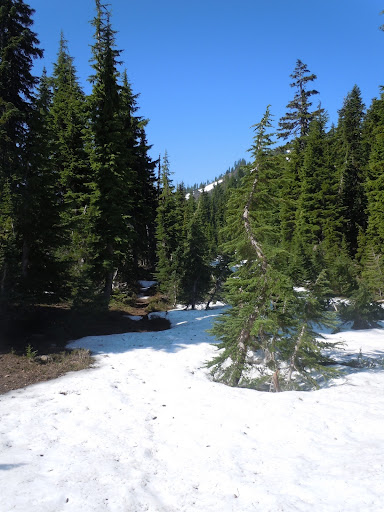 At a gap in the trees I left the trail, crossing a wide, snow-covered meadow and contouring up the snowfield covering what is typically a pile of red rocks–like a very mini-South Sister. Up I went, stopping at what seemed to be the false summit to admire the view, before continuing along a short ridge to the top. It was pretty breezy and cold here. I’d actually wished I had a puffy with me! Relaxing here, I enjoyed lunch and another cupcake. The views of Mt. Jefferson and Three Fingered Jack were impressive. 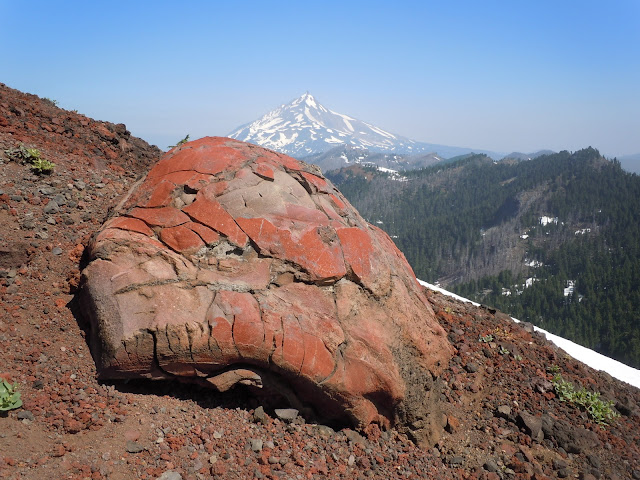 While sitting here I debated how I should complete my hike. According to the Sullivan book, I could make a loop by going north on the PCT for 1.5 miles or so to a junction that would lead me right to a trail that switchbacked another 1.5 miles down to Carl Lake. According to the map I had, there was no such connector trail between the PCT and the switchbacks to Carl. Considering the patchy snow cover I’d already seen, I wondered how smart it would be to try and cover new ground up high where the snow cover would likely cover the trail, and completely disguise any junction.

But it was early. I had all day to tromp around in the woods. So, I went for the loop option.

Back on the PCT, I blasted past the junction I hit on the way up and continued north. I was accompanied by a bloom of tiny toads, hopping around right at the edge of the snow melt. It was as if the toads had arisen from the melting snow crystals. I encountered much more snow cover on this leg of my journey. The trail traversed some steep hillsides, so the snow made great ramps from right to left. A slip would have sent me for a ride. The softer snow was no trouble at all, but the hard snow meant I had to expend some energy kicking solid steps. I would have been happier with an ice ax and some traction would have been nice. But, I made my ski poles and trail shoes do the job. 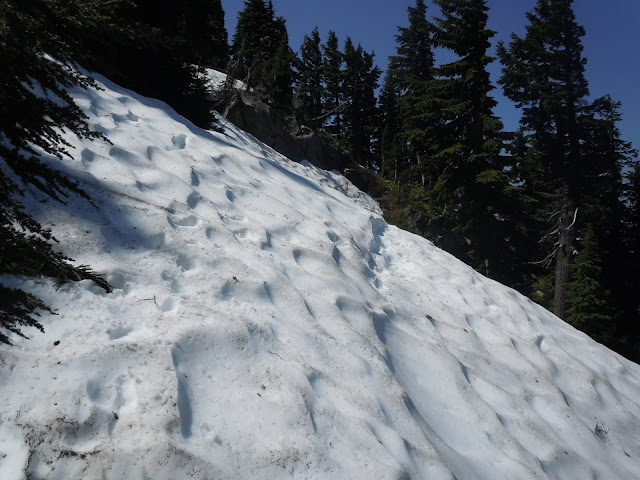 I carefully kept track of my time on the trail to estimate when I had covered 1.5 miles on the PCT. I had also scouted ahead to try and envision a logical spot for a trail junction. I decided that a saddle just before the next big, red bump was a likely location. And the timing worked out just right. As I approached the saddle I ventured off trail as the PCT dipped behind the crest of the ridge. Preferring to see where I was headed, I meandered through the mangled underbrush and rocks that littered the ridgetop.

The trouble was, the saddle led out east to a couple of flat benches that were completely snowbound. At the edge of each bench was a pond of meltwater, and beyond that probably some steep hillsides leading towards the lake basin. It was hard to see what was beyond the trees. I crept along until I felt confident enough to make a decision. 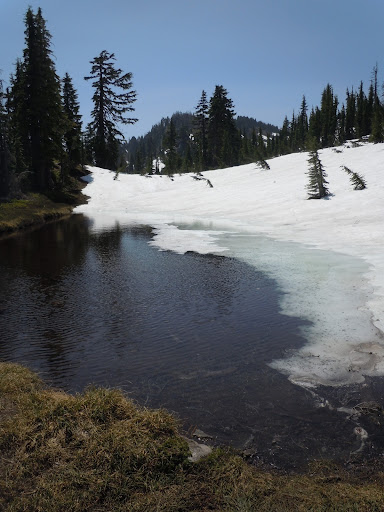 I picked a line I thought would go, and after a few short minutes of walking I cliffed out. From my clifftop perch I took some pictures and looked around carefully. I saw what appeared to be a trail in the distance, beyond the talus at the base of the cliff. I zoomed in with my camera to try to get a better look. Whether or not it actually was a trail, I decided that would be my next stop. 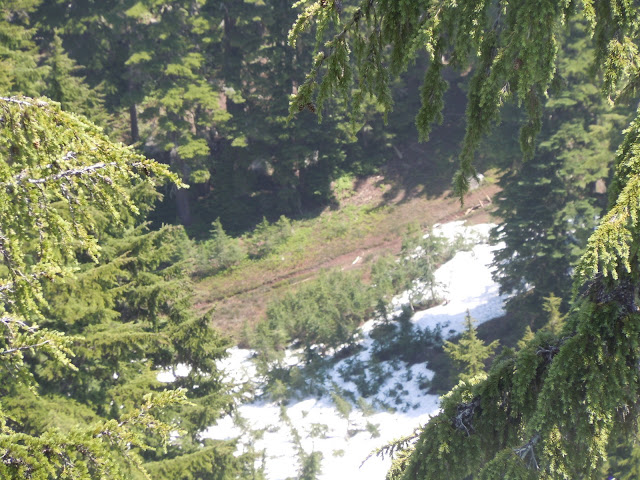 Taking the path of least resistance to the east, I reached the talus field, boulder-hopped across, and lo-and-behold, found an actual trail!

Following the trail was mostly pretty easy, with some snow crossings, and I made quick work down to the lake. I turned left at the lake to walk along the north rim this time. I spotted a small water access point and veered that way to stick my feet in the water as I ate some food and did some reading.

After growing tired of listening to a group of people pounding on tent stakes for what must have been a half an hour, I packed up and continued my circumnavigation of the lake. I passed a group of campers relaxing in the shade and saw a couple other nice campsites up on top of the rocky rim. This would be a nice place to set up camp.

I headed out the way I came in, passing several groups destined for Carl Lake. I even passed a trio from the park service who were hard at work sawing through a large downed tree. The ranger requested that I cut a switchback as to avoid the guys hard at work. Of course, as I walked directly below the aforementioned tree, I heard a huge THUMP and it sounded like the thing was coming straight for me. I picked up the pace. 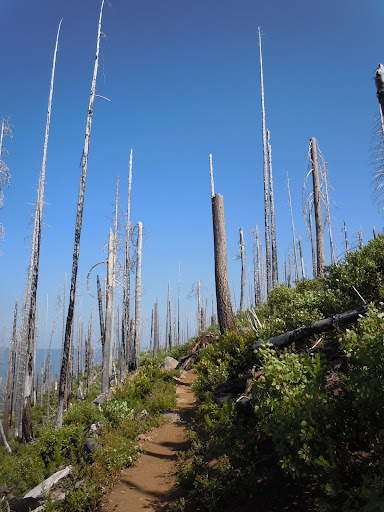 It had been a long day. Even with ninety minutes of rest time, I was tired. South Cinder Peak was a worthy opponent. And I became aware of so many trail options in the area. If only I could get rid of my distaste for backpacking, there could be many more great adventures to be had.