Tombstone Nature Trail > Cone Peak Trail > up to summit and back 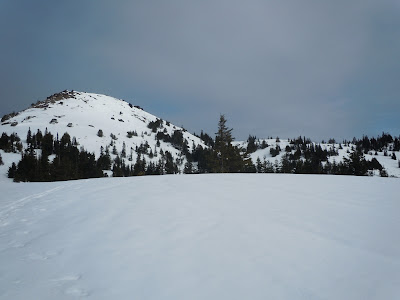 We were in full-on preparation mode for building mountaineering skills. In planning a trip for spring break, I realized my partner needed a little practice in using an ice axe and crampons. This weekend’s adventure was all about getting some snow-time in a safe learning environment. Our goal: the summit of Cone Peak.

Cone Peak is just a hop, skip and a jump away from the highway heading up to Santiam Pass. In the winter, this highway corridor is a playland of snow. In summer, numerous trails wind up dusty slopes, through dark green forests and past vibrant wildflower meadows. 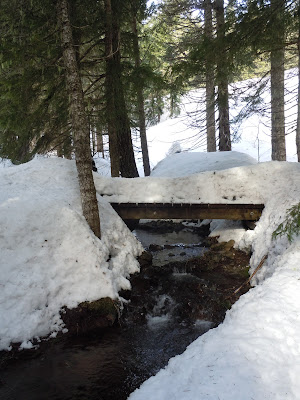 We put on snowshoes right out of the car and began our trek through the snow. A sharp descent from the parking lot brought us to a forested walk, then back up to the road. We darted across the bare pavement in snowshoes and picked up the trail on the other side. After much snow-slogging and debating about where the trail went, we finally caught a view of some mountainous bumps. We were slightly derailed by the vista of South Peak, which we mistook at first for Cone Peak. After re-finding the trail and identifying the real Cone Peak, we were on our way again.

We could see some snowboarders making turns on the aptly cone-shaped top of the mountain. We continued up to a rocky outcrop, where we switched from snowshoes to crampons. It got steeper here, but the snow was slushy enough that we probably could have made our way up without them. However, since the intention was skill-building, we dressed for the lesson. 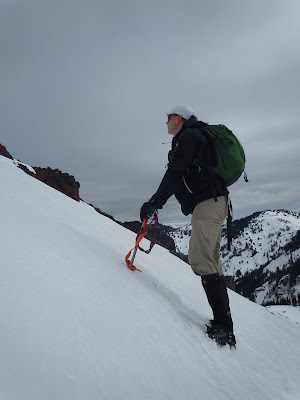 I did a couple of quick demos on self-arrest, then crampon and ice axe technique. Aaron got a little bit of practice, then we headed up. Slowly but surely we made it to the top, where the views were cloudy but beautiful nonetheless. The summit was eerily windless and the air temperatures were not that bad.

While we ate lunch, a group of snowboarders and skiers made their way up the northeast side of the mountain. After finishing our food it was time to go. We’d dilly dallied our way up here today. The way down was much faster, since we knew the way and there was less education and gear-hassling to deal with. We were back at the car in about 90 minutes. 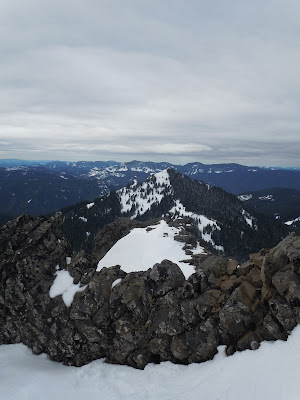 This was a productive trip! The mileage was nothing to brag about, but we got in some excellent snow travel practice and found some pretty views on a quiet peak.