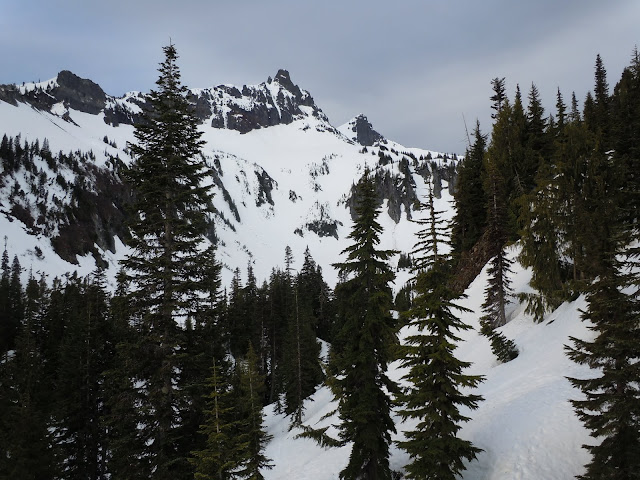 Rick and I took advantage of early sunlight to get a semi-alpine start on this climb, not because it’s particularly long and grueling, but because we’d hope to avoid large groups of newbies heading up. Unicorn Peak, the highest of the Tattoosh Range located near Mt. Rainier, is a fairly straightforward snow slog with a short rock climb at the top. A quick rappel and some glissading finish off the descent on this high bang-for-your-buck climb.

Not knowing what to expect on my first visit here, I prepared for everything and carried harness, helmet, rock shoes, rock protection, 60m rope (the only rope I own), crampons, axe, hiking poles, the whole nine yards. That, combined with slushy wet snow, made for a tortoise-like walk through the forested approach. This year’s snow levels are high compared to last, and the warm June temperatures didn’t allow the surface to harden up for easy travel. Rick and I followed a bootrack as it snaked through the trees and crossed a river twice. There were lots of ups and downs that led us to a wide U-shaped valley containing the elusive Snow Lake. Steep slopes on either side of the valley had recently shed snow and debris onto the snowfield we walked across, making travel a little tricky. A few times we punched through a weak layer of snow devilishly covering up a loose conglomerate of evergreen branches below. As we picked our way through the debris we eyed the thick layer of gray clouds between us and the sun, wondering if we’d get the 80 degree weather predicted.

At the far end of the valley we climbed up a moderately steep snow gully also filled with avalanche debris. Piles of rocks and snow fanned out from the rock walls above us. We moved methodically up the snow, as Rick kicked steps and I hauled up the rope and gear behind him. Beyond the gully there was more moderate snow climbing, which felt a lot harder than it was due to the soft snow conditions. We stepped gingerly across a tree top bergschrund and made the last left-hand turn onto the summit ridge. 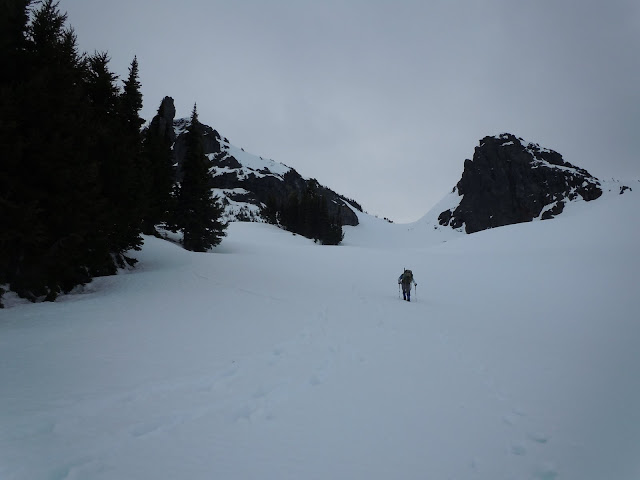 We followed footsteps all the way to the false summit, scrambled over the small rockpile, and tossed our packs onto a dry rock at the base of the summit pinnacle. The small, docile pile of rock allegedly has 4 variations of low fifth-class climbing to choose from. I looked at a photo with some route descriptions and tried to pick out the 5.6 “Classic” route as our method of ascent. A straightforward-looking system of ledges and slab was going to do the trick for us. I never found the piton mentioned in the decription so I’m sure we were off route, but it was fun anyways. All I needed were two slings and a #2 Camalot to protect the pitch. I belayed Rick up from atop the rock pitch and we both explored the small summit area from there. The wind completely died down, and the clouds were sparse. We enjoyed views of all the major peaks in the area, including Rainier (of course), Adams, St. Helens, and Hood.

A short rappel off a gnarled old tree brought us back down to the snow, where we re-packed our gear and put on some rainpants for glissading. On our way back down to the gullies, we passed a group of Mountaineers on our way up–the first folks we’d seen today. We continued along, moving rather quickly now compared to the earlier slog, and eyed yet another large group approaching the upper gully. Being fellow Mazamas, we exchanged words and then set off for a bit more solitude. We’d had just enough of this walking business and decided to glissade down the last steep gully to the valley of debris. I’d forgotten to put gloves on, so my hands became numb as I steered the butt-sliding by driving my ice axe deep into the slush.

By now the sun had become absolutely ferocious, causing me to stop, adjust layers, pack up my axe, and have a snack. Rick trudged on ahead while I took my time basking in the sunshine. We ambled out at a comfortable pace, following our tracks back to the car. Although it was a really straightforward alpine climb, it felt great to use my combination of skills out in the field, and to spend another day in the mountains with a great friend and climbing partner. I’m looking forward to an exciting and eventful summer.