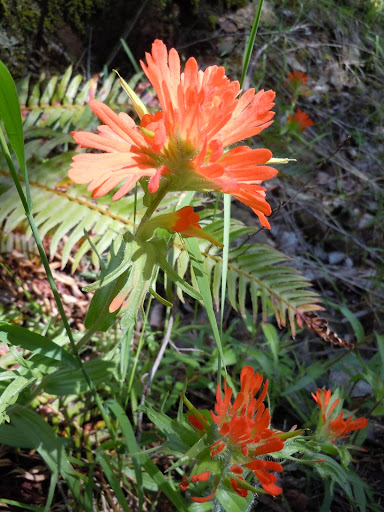 The morning began with the obligatory drive east to the edge of the persistent gray that shadows the Portland Metro area. When I arrived at the trailhead I knew it was going to be a good day. I parked my car right at the trail marker, not knowing there was a parking lot just a few yards up the road. Immediately the trail began to switchback at a gentle grade, leading me up into the forest. As usual, I stopped frequently to take pictures of the lovely wildflowers and practice my plant identification skills. The trail ambled onward, going up and down so frequently that if I walked just a little faster I might feel seasick. The sun was mostly blocked out by the thick tree cover, but it managed to burst through the foliage every now and again. I was glad that the shrubs on either side of the trail were spraying me with water to keep my body cooled down. I hadn’t quite adjusted to summer hiking yet.

A few miles up the trail, the path goes down, down, and down some more. I knew I had to go up eventually, so I was hoping there was a good reason why the trail was built this way. Soon, it would all be clear. I passed by a “Bridge Out” sign, and proceeded to descend to Stebbins Creek. Today, the water level was low, but I didn’t want to get my boots soaked crossing it so I stripped down to bare feet. The water was so cold that the blood escaped from my lower extremities so quickly I thought I was going to lose function of my feet. I got across as fast as I could, then put my chilled toes back into my socks and boots, then proceeded to regain all the elevation I’d just lost. 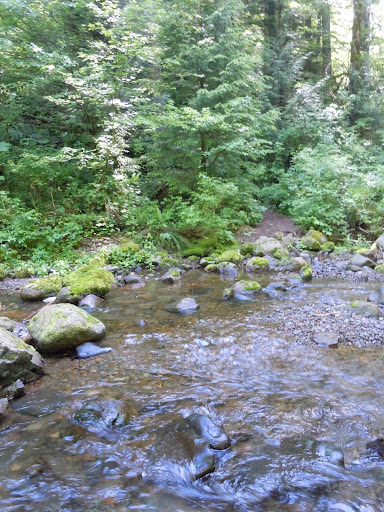 I listened to the birds, watched out for snakes in the sunny sections of trail, and worked on de-cluttering my brain. This was my second day of summer vacation and I really needed the decompression time. I’d hoped that I wouldn’t run into anyone out here today. As the trail began to flatten out and follow a ridgeline, I was treated to patches of beargrass and other early summer wildflowers. The trees began to thin out, allowing more sunlight to extend down to the trail. Occasionally I’d catch a glimpse of far away, forested ridgelines, hoping I didn’t have to walk that far (but knowing deep down I did). 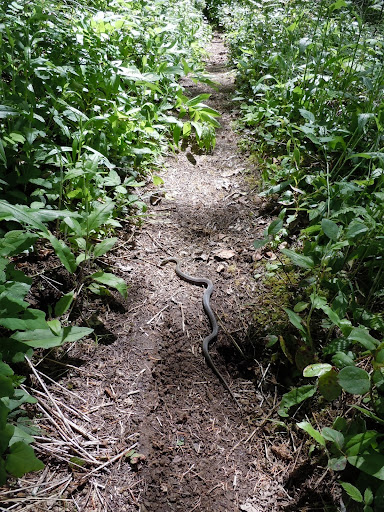 Before long, the trail crossed a gravel road, and I noticed a van parked right on the other side of the road. It was blocking the cairn marking the trail on the other side, so I mistakenly walked up the road a bit looking for the continuation of the trail. After several minutes of not finding anything, I turned back and found the trail, knowing now that my destination was awfully close.

Shortly after walking up more switchbacks, I heard some loud whooping and hollering in the distance. This totally pulled me out of my internal musings and brought me back to annoyance and frustration. Who would be up here screaming and yelling in these peaceful woods? I noticed mountain bike tracks along the trail earlier, so I thought maybe some mountain bikers are bombing down the trail. I carefully turned each corner, looking ahead and being prepared to step aside to let them pass. Then the voices started shouting at each other in Spanish. Okay, now this was getting very odd, because in all my years of hiking 99% of the hikers I encounter on the trail are White. To my surprise, four young Latino men walked down the trail carrying huge loads of freshly cut beargrass on their shoulders, presumably heading back towards their van. I smiled and said hello, and they quietly passed me by. As soon as they were out of sight they began yelling loudly at each other and screaming like a bunch of drunk frat boys. The whole thing felt really bizarre. I’m not even sure they were harvesting legally, but I didn’t exactly want to confront them about it. I was incredibly glad when they walked out of earshot so I could continue hiking along in peace and quiet. 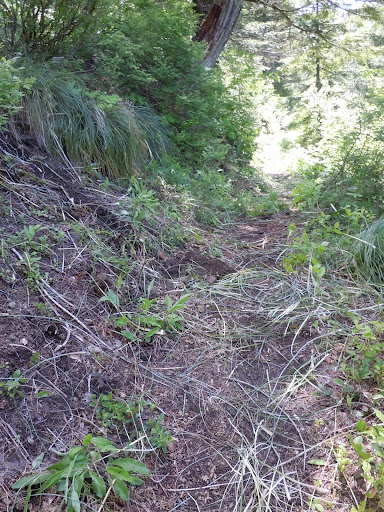 It felt like hours of walking through blooming meadows and dry, rocky outcrops before I reached the summit area with its giant radio tower. An old trail led to the top of the rock pile, complete with deteriorating slabs of cement walkway and metal handrail posts sticking straight out of the ground. I was relieved to plop my pack at the top of the old lookout site and rest my tired legs. From here, I could see five volcanoes. It was awesome. After taking too many pictures, I thoroughly enjoyed my PB&J sandwich, then laid back and took a short nap. 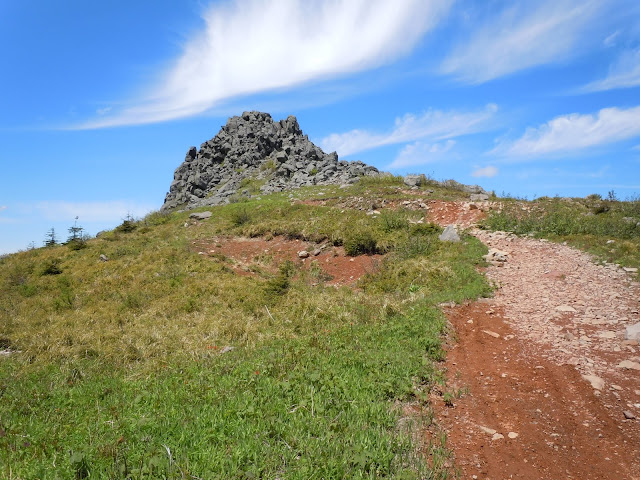 It was really difficult to get up and leave but I knew I still had a long walk before I would be back at the car. I had set a goal earlier to make the round trip in 8 hours, and looking at my time so far I knew it was still do-able.

The sun was fierce now all I could think about was the cold, cold stream that was miles away from here. I didn’t stop much on the way down. My pace was slowed because my knees were tired and my feet were sore, so I just dove back into my head and moved methodically along. When I reached the stream, I was happy to remove my boots and walk across. I stopped on the other side to eat a snack and douse my head and neck with water. An hour and a half later, I was back at the car, both happy and exhausted.

I would recommend this hike to anyone who has a decent amount of stamina. None of the trail was that hard due to the moderate grade and neatly maintained shrubbery. However, the overall length might make it difficult for the average weekend warrior. I know there are some shortcuts that bring the hike down to a 5 mile round trip or so. Either way, this summit is well worth the work.