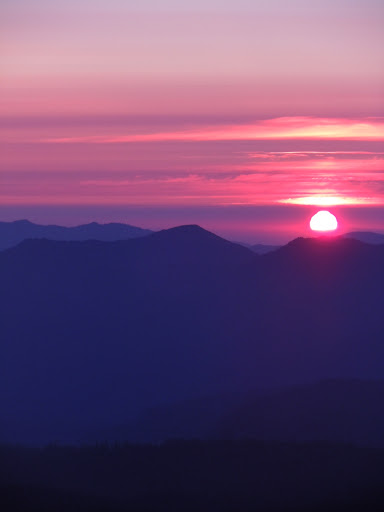 I was overdue for a night out in the woods. Knowing the snow level was still hovering around 5000′ I chose to see what I could do on the Foley Ridge trail. Located near the McKenzie River on the west side of the Three Sisters, there was a high point only a few miles in that would make a nice camp spot. I also had an evil plan to scope out the approach to the Husband scramble and give it a shot if I was feeling good. I packed pretty light, with a bivy and just enough food to get through two days, plus an ice axe and helmet just in case.

The drive to the Foley Ridge trail was along a paved road with a nice bit of gravel road at the end. The trailhead was empty, as expected, and I started out along a pleasant, woodsy path that was totally snow-free. Although there were no people to share the trail with me, I was soon joined by a plethora of friendly mosquitoes. This was the one thing I’d forgotten to plan for. I hoped to walk fast enough and high enough to escape their advances. I am scratching my arms as I write this.

Most of the trail was dry and clear, with occasional snow patches. At about 3 miles or so, however, the snowpack became consistent and there were a few points where it was not at all clear where the trail was. I was very careful about proceeding ahead into the unknown, and eventually stumbled upon a steep slope that terminated in a cliffy rock face above me to my right. Sweet! Must be my destination. 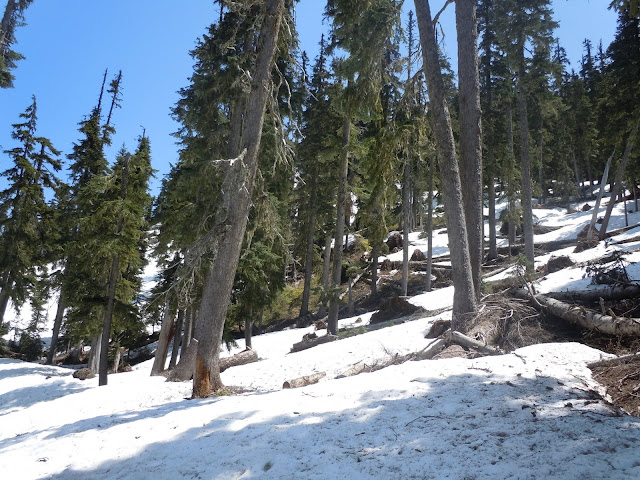 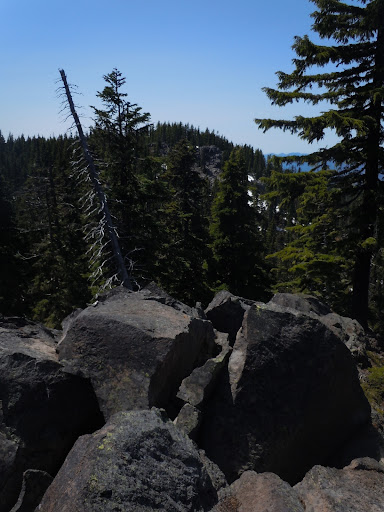 I continued along, searching for tree cuts until I grew impatient with finding the trail and set a course for the top of the cliffs. Once I arrived, I determined this was NOT my destination, which was the wooded bump behind me (I hoped). I knew my goal was an old lookout site, so I knew it would be obvious if I was in the right spot.

Making my way up the hillside, I avoided the steepest sections and tried not to unknowingly step into giant leg-swallowing holes covered up by thin snowbridges. This, I have learned, has something to do with skill and something to do with luck. As I neared the top of the hill I re-joined the trail, which took me to the melted out, rocky summit. A squarish flat spot with huge metal fixtures indicated that a lookout once stood here. I plopped my pack down and spun around to gaze upon all of Central Oregon, with a front-row view of the west side of South Sister. 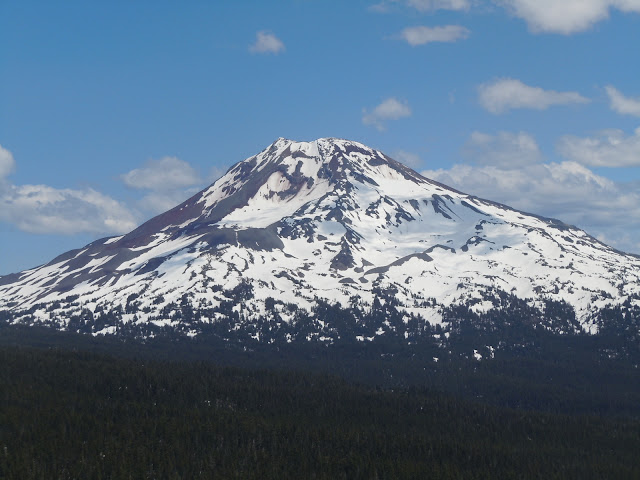 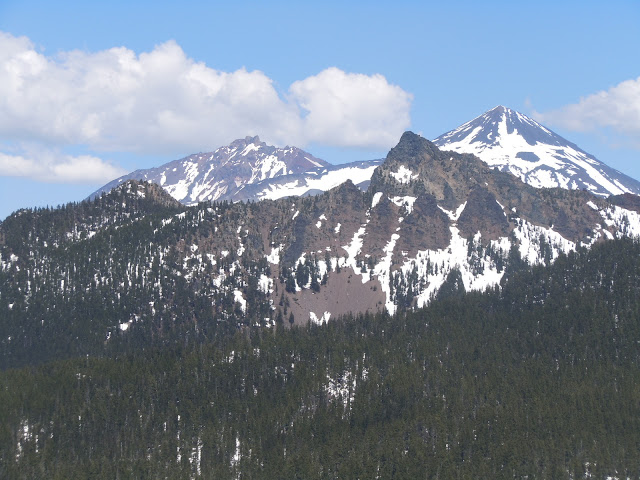 The rocks atop the summit were carved with names dating back to the 1930’s. Some people obviously spent a great deal of time carving into the rock. Dying in the full force of the afternoon sun, I rigged up a tarp to provide some shade for myself, then took a nap. I enjoyed relaxing all afternoon and evening on this small, lonely summit with spectacular views. I even picked up a bunch of the Forest Service’s trash: shards of glass, nails and other bits of metal that marred the dirt surface. I dumped it into the Ziploc bag from my dinner to make it easy to pack out. 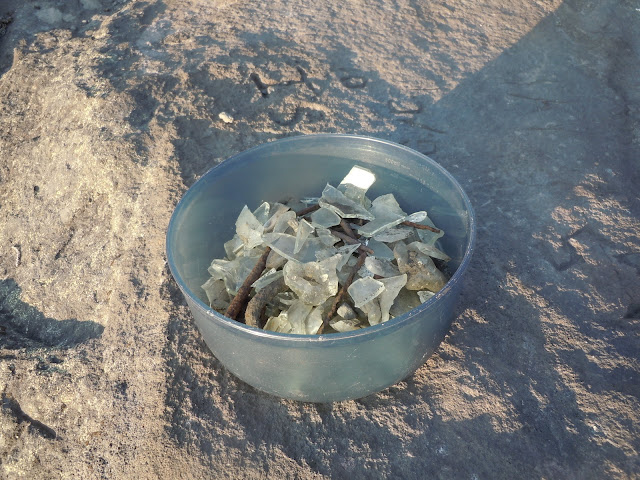 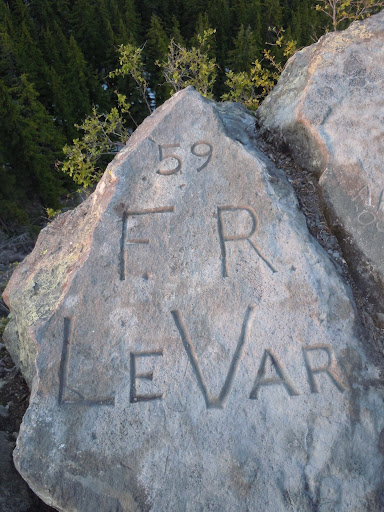 That evening I hoped to sleep out, but not five minutes after I bedded down I was visited by what looked like an enormous mouse with a big head and eyes and a rat-sized body. It was sniffing around all my gear and I was afraid it was going to chew through everything it could get its grubby mouth on. My food was hanging out of reach, but it seemed really interested in all my other stuff. I unpacked the bivy and shoved almost everything in there, including myself, and went back to bed. It was still rustling around, completely unafraid of me. After figuring out the Ziploc bag that smelled like food was filled with broken glass and rusty nails, it lost interest and went away. The mouse passed the baton to the full moon, which now rose above the rock I was sleeping next to and shone like a massive nightlight directly into my eyeballs. No, I would not get any sleep tonight.

The next morning I crawled out of my sleeping bag around 6am and it was already a comfortable temperature outside; I knew it was going to be a hot one. After lazily eating breakfast and packing up, I navigated through the snowed in hillside back to my tracks below the talus field and quickly found the trail. There was one particularly tricky section that confused me on the way in and it totally threw me on the way back out as well. But, even with that obstacle I was back at the car by 9:30am.

On the way back home I hit three waterfall viewpoints: Rainbow Falls, Sahalie Falls and Koosah Falls. The Rainbow Falls viewpoint trail, which starts from Foley Ridge Road, was a very pretty walk along a mellow trail but the waterfall view area was nonexistent. I’m not sure if there was ever a niver view. It seemed like a pointless place to build a trail if the “view” was the purpose of the thing. I more than made up for the lackluster view with a quick walk to the other two falls, located off Highway 126. There was so much spray coming up from the falls and the water churning violently in the river that it felt at least 10 degrees cooler walking along that trail. I think I even had goosebumps at one point. It was an excellent choice for a hot day! 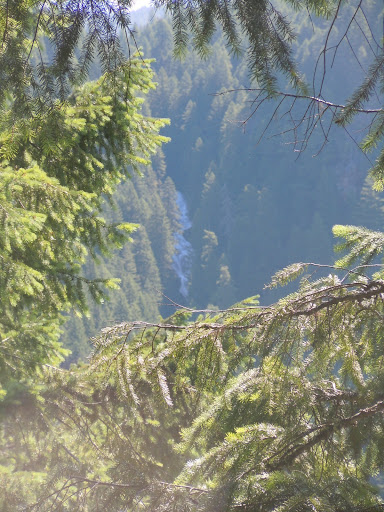 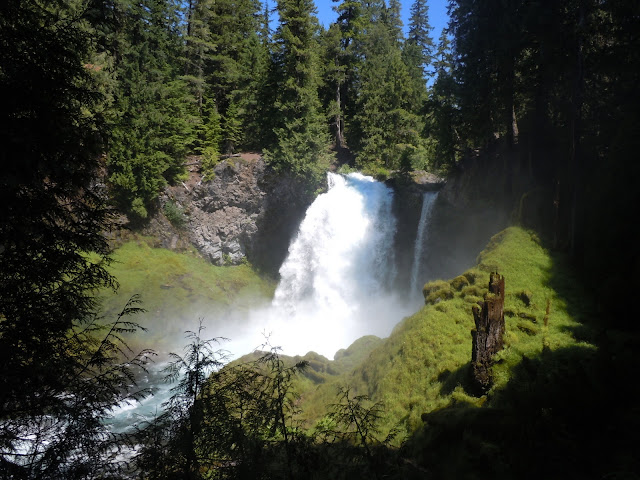 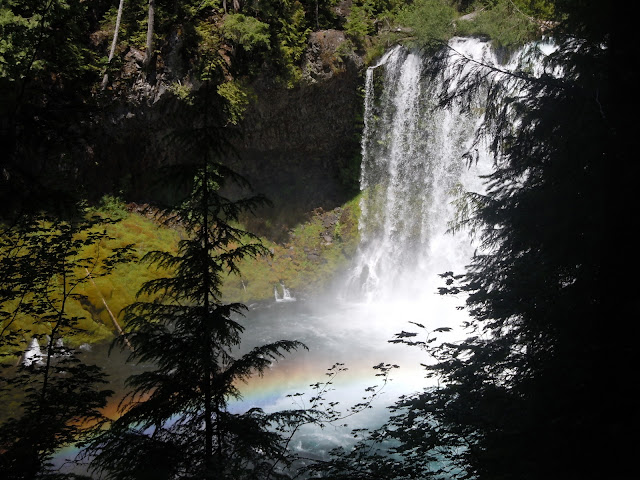 All of the photos can be found here.