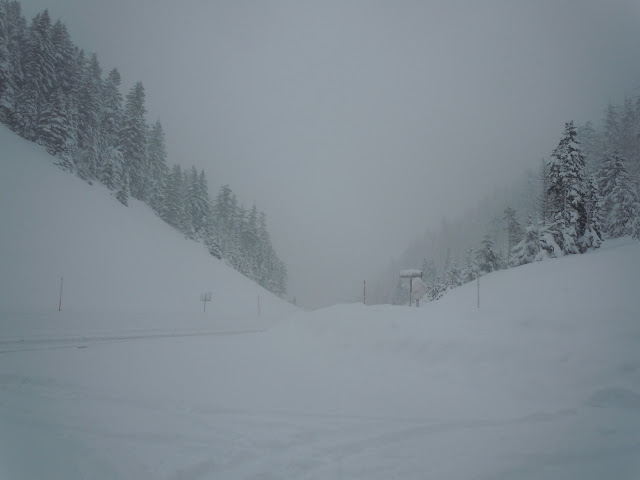 It was the last wake-up for our trip. Sadness. I knew I had to prepare a big, filling breakfast, because we’d be snow-slogging through fresh stuff up at the pass again today. So I lovingly prepared what Aaron called “gruel” as he began to break down camp.

The “gruel” consisted of polenta, almond milk, butter and pumpkin puree, topped with chopped Macadamia nuts and maple-flavored agave syrup. HELLO! Most people eat instant oatmeal straight out of the packets on winter camping trips. This was four-star dining here.

As we drove towards Santiam Pass and checked the time, we decided we had just a couple hours to play in the snow. We decided to park at the Potato Hill Sno-Park and set our sights on the treacherous and feared summit of Potato Hill. I mean, come on, they couldn’t have come up with a slightly more intimidating name?

Big, fluffy snow flakes poured down on top of us as we geared up for this last snowshoe hike. We headed out in knee-deep fresh stuff, each step feeling as strenuous as ten. Progress was slow. We traded positions frequently and stopped for water and snack breaks as needed. About an hour and a half of walking brought us only marginally closer to the bigtime summit of Potato Hill. In an attempt to get on top of something, Aaron pointed to the closest bump and we headed up there. That would be our turnaround point of the day. The wind blew a little more steadily up here and the snow continued to fall. Standing around made us cold fast so we took our pictures and got going quickly. 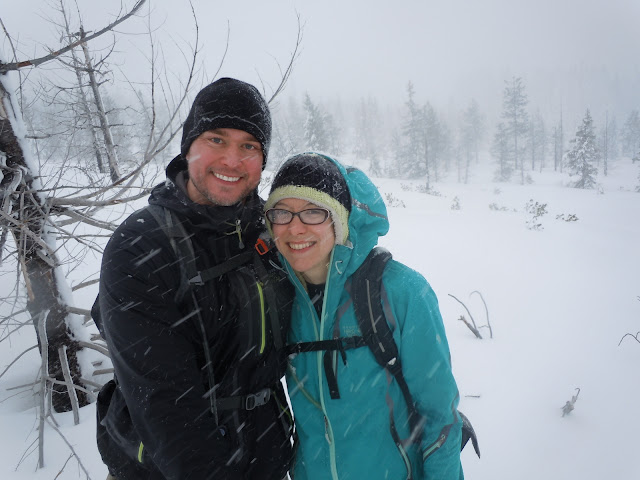 We turned back and trudged along our broken path back to the car. We made it back to the Sno-Park at our predetermined return time, 2pm. We happily swallowed some homemade cookies and brownies as a reward for the day’s hard work. We watched as long trains of cars driving 10 mph dragged along highway 20. Meanwhile, a guy in a massive pickup truck rolled down his window to ask how deep the snow was, and if he could drive down into the Sno-Park safely. One quick look at our low-clearance Subaru should have given him the answer, but alas, I think inclement weather dampens everyone’s IQ.

As we exited the Sno-Park and started driving west, I smiled in satisfaction. Another wonderful road trip was under my belt. How soon is Spring Break?

View all the photos on Picasa.