Photos from the trip on Google+ 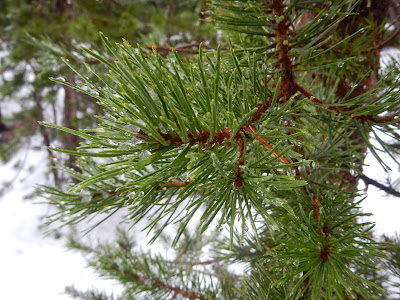 Six years ago, I stumbled upon this gem of a trip, and I have been returning every year on Thanksgiving weekend. I rarely hike the same hike twice, but this journey has been something really meaningful to me. I was excited to come out with Aaron for his second trip to the Maiden Peak cabin.

The day before Thanksgiving, we left the deserted parking lot around 10:30 pm and walked up a dark and slushy Gold Lake Road to the three-sided shelter. At the time I looked at the tiny accumulation of snow and sincerely thought it was a terribly low snow year; but as I re-read the last 3 trip reports, I noticed that I said the same thing from 2011-2013. So I guess the snow levels were indicative of a normal snow season.

At the shelter, we made a fire and set up our sleeping bags for the night. It wasn’t all that cold, so we slept comfortably until sunrise the next morning.

It was dreary, cool and rainy the next morning. We were in no hurry to pack up and move out. Raindrops drizzled down from the shelter’s roof.

On to the cabin 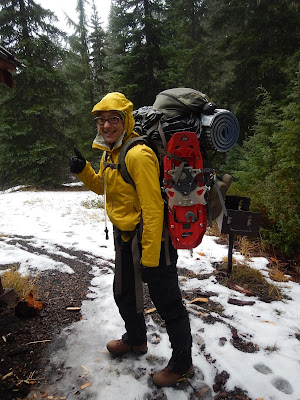 Decked out in rain gear, we left the shelter for the three mile uphill walk to the cabin. The trail was mostly bare ground, with occasional patches of snow, all the way up to the PCT. That hill climb to the trail junction was brutal with a 50 pound pack on. But I knew the value of the weight on my back, so I trudged ahead.

As we approached the cabin, the snow finally began to fill in the trail. But we made it all the way without needing the snowshoes tied to our packs. At the cabin, Aaron split firewood and I got our gear organized. 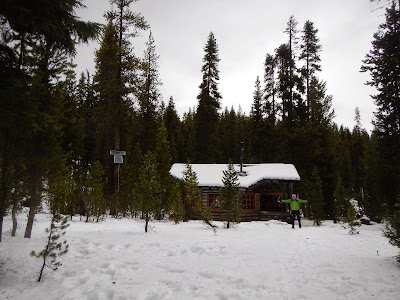 After a long afternoon of reading, solving word puzzles, and counting down the minutes, we decided it was time to celebrate Thanksgiving. I used the one cooking pot I had to heat up all the menu items we had. We feasted, as usual, on roasted turkey and all the fixins. I washed it all down with a can of beer. And just as we finished our meal, we saw a couple of headlamps marching towards the cabin.

The door creaked open and a dog poked its nose inside. Oh, great, I thought, that’s the worst possible addition to the cabin. My dog allergies would ensure a miserable remainder of the trip. Then another dog entered, followed by their two human companions. I went from happy to grumpy in the course of 5 seconds. 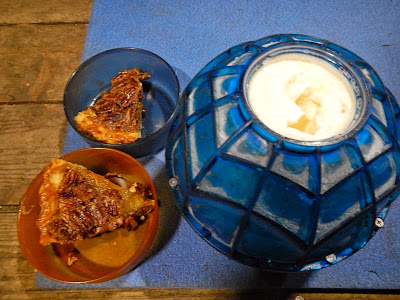 I scrambled to make some space for the newcomers and plopped back down in front of the fire. Aaron, a stickler for tradition and lover of dessert, excitedly asked if we could make ice cream. We did that, and served it up with a couple of slices of pie. Then, we went off to bed.

The weather was awful all night, damp and rainy. The same was predicted for today. Initially I thought maybe we’d save our summit trip for the nighttime and catch the sunrise the next day. But the thought of being holed up in a cabin with two dogs all day was discouraging. We had to do our Maiden Peak hike today, despite the weather. I hoped that the rain would turn to snow as we hiked up.

We left the cabin during a little break in the weather, dutifully following blue diamonds up the Maiden Loop Trail. Shortly we reached the junction with Maiden Peak trail. Although this junction gives me trouble every year, Aaron was quick to find the first couple of diamonds and we were on our way.

The trail from this point marched pretty much uphill to the summit. I’ve never been able to follow the trail all the way to the top. Each year I find a new variation on the same theme. Anyways, going up is the easy part. Just keep walking til you can’t go up anymore. 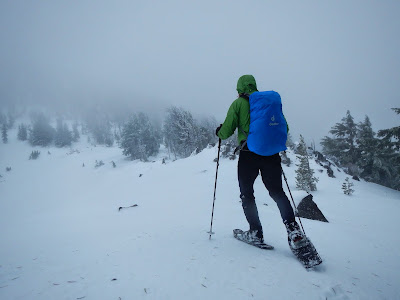 As the trees began to thin and dwindle in size, we lost our buffer from the wind. We stopped to layer up before the final push. My route, arguably more interesting than the actual trail, leads up to a pile of rocks, then follows a softly undulating ridge to the false summit and then the true summit. Here we passed small trees exposed to all sorts of weather. Each needle and branch was covered in layers of wind-sculpted ice. The frozen arboretum provided spruced up the otherwise gray, drab and windy surroundings.

We spent just enough time up there to scarf down our leftover turkey sandwiches before retreating along our  tracks, back into the forest. With zero visibility, there wasn’t much for us to see up there anyways.

The weather had warmed a bit since we’d left the cabin in the morning. It rained on us during the last quarter of a mile to the cabin. We were happy to be able to dry off by the warm fire once we got inside.

Waking up to winter

The next morning I sat up hacking and coughing and gasping for air. My dog allergies had caught up to me. I bundled up and stepped outside to catch my breath. But the scenery quickly took it away. Overnight, several inches of snow had fallen. The vista before me was more like the picture perfect winter postcard of years past.

I couldn’t have gotten out of there too soon. There’s nothing like hauling a heavy pack around when you’re wheezing and trying to breathe. The less time I spent in the cabin, the better. So we ate breakfast, assembled all our things, and hit the trail. 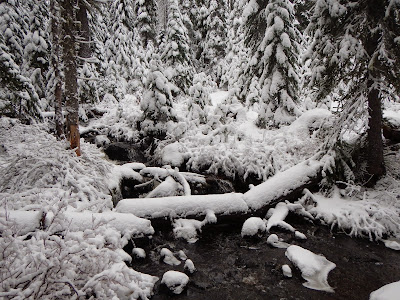 The new snow made the walking a little more strenuous, but the added beauty more than made up for the extra effort. Aaron and I enjoyed the crisp, dry, and cold air as we plowed through fluffy snow and admired the spectacular place we were in. I quickly forgot about the breathing; I figured the slowness of my pace was due to the frequent stops to photograph nature and do silly things. We had some great conversations about nature and life and risk, inspired by all that surrounded us. 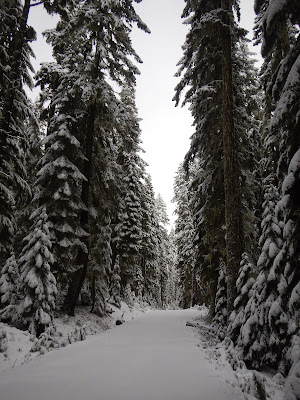 Even the road into Gold Lake looked pristine with its fresh coat of snow. Numerous animal tracks zigzagged across the road, leaving fleeting evidence of last night’s activities. Being in the forest made me appreciate the opportunity to be out in the woods, even if it didn’t completely go the way I’d planned.

Will we return next year? I haven’t decided. It was miserable to be around the dogs. To be fair, they looked miserable too. I felt bad for them. At least I made the choice to be there, they didn’t. Maybe it’s time for me to look for a new adventure and begin a new chapter in my Thanksgiving hiking tradition. Who knows, I have a year to figure it out.