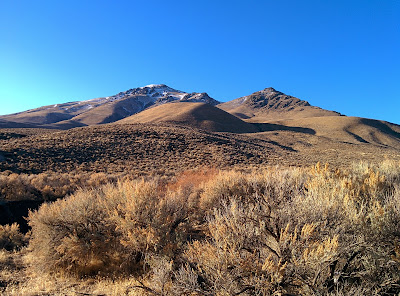 We arose with the sun on a cold desert morning, ready to face a long day of walking. Not having an accurate idea of how many miles we had ahead of us and how challenging the terrain would be, I wanted to be sure we had all the sunlight we could get. Pueblo Mountain (8632′) is the second highest peak in southeast Oregon, behind Steens Mountain (9733′). The descriptions I’d read were anywhere from 10-14 miles in length out-and-back, with 4000′ of elevation gain from car to summit. There were no trails, so it was cross-country the whole way. The nice thing about this high desert peak was that it was mostly bare of trees, leaving a maze of sagebrush, dirt, grass, and snow to navigate. That ranked pretty low on the difficulty scale.

We hiked up the road a couple hundred yards, then veered left across a narrow wash and up a broad hill. We could see what appeared to be a white post so we made our way over to that. Upon reaching it we found a 3′ long PVC pipe with small holes drilled neatly into the sides. Ahead of us we found a few more, but they didn’t seem to be markers of any sort. With that distraction behind us, we kept walking to a level meadow and scoped out the climb ahead. From here we saw two distinct ridges. There appeared to be a dirt road switchbacking up towards the summit on the further of the two ridges. We decided to head for the road, which was faster than negotiating the sagebrush.

Once we reached a good spot to leave the road, we charged straight up the hill presumably leading towards Pueblo’s summit ridge. Occasionally we’d come across a bit of the road, which clearly had not seen recent use, and take it easy for a few steps before trudging uphill again. Methodically we made quick work and headed into the more interesting, rocky bits. 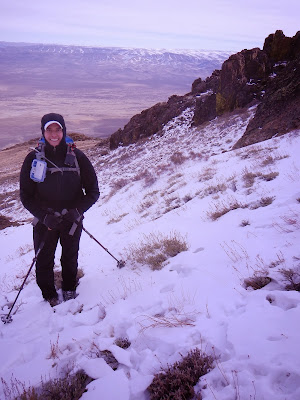 The hillside got steeper and steeper. Nearing what appeared to be the summit, we hit some snow. Lucky for me, some deer had broken trail ahead of me. The snow was hard-packed from the wind and kicking steps was much harder than following the deer prints. We paused briefly behind a tall rock to put on a wind layer before stepping out into who knows what next, which turned out to be a great idea. The wind picked up, and we soon found that we were nowhere near a summit.

Ahead, we saw another rockpile that looked higher. Then another. A long, gentle ridge stretched out for what felt like forever but in reality was closer to a half a mile. The bitter cold and steady wind helped put some pep in our step as we raced for our summit. You can almost feel the wind in this video:

I was elated to find the USGS summit marker atop one of the rockpiles I investigated. No more searching! Time to eat lunch.

I initiated a SPOT “ok” message, and we bundled up to eat lunch and wait for the message to send. We were getting a little taste of winter mountaineering with the relentless wind and freezing temps. It was awesome. Just as we were beginning to pack up, I caught some movement across the plateau we crossed earlier. It was clearly two animals, but they were too stocky to be deer. They didn’t move like deer, either. Aaron suggested we were looking at our first bighorn sheep. Incredible! It was hard to make out much detail, but it was the only logical guess. See for yourself:

As soon as that SPOT sent, we packed up and bolted down out of the wind. Instead of retracing our steps exactly, we decided to make a little loop and head back down the other prominent ridge that we saw from the meadow. Little did we know, this was the windy side. The seemingly endless wind eventually dissipated enough to take off a few layers and breathe normally again. We ambled down the rockier, steeper ridge until the dirt road again came into sight. From the road, we walked to the meadow and returned roughly the way we came up, stopping to marvel at the lush moss growing beneath the brown and dusty sagebrush at the dried up wash.

Back at camp, we watched a beautiful sunset, then cooked up a storm. A couple of heaping bowls of curry later, we were well poised for a good night’s sleep.