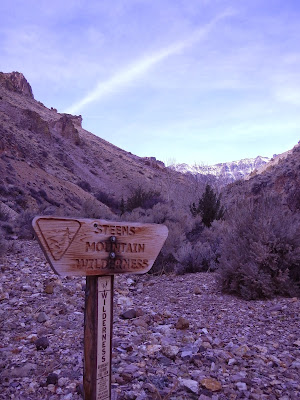 In between nights of camping in the Alvord Desert, we took a stroll up Pike Creek Canyon. The trailhead is located at a primitive campsite up a godawful dirt road. The road wouldn’t be too bad, if not for the deep ruts and huge boulders poking out. In a high clearance vehicle, no problem. In the Subaru, well, we had to park just a little ways down the road from the trailhead. 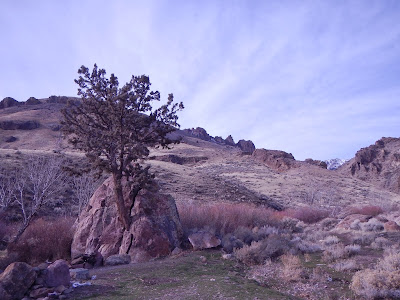 We walked up to the campground to find various animal bones, shotgun shells and splintered plastic shooting target things, plus this really big tree splitting open a rock in slow motion. It was a neat place.

We crossed the creek on an ice bridge, although the liquid water coursing beneath the ice gave us pause. Right from the start, the trail was in the shade so we hurried along to generate some body heat. We passed a trailhead register, which had an interesting, ranty dialogue with unpleasant words being passed between a grizzled, old country redneck and some city-dwellin’ granola types (stereotypes based on the register text).

We followed the trail as it climbed up and away from the stream, then switchbacked down to cross over it. We ascended back up on the other side, where we stopped to catch our breath.

While resting, we saw two figures. It was clear immediately that these were bighorn sheep. They were much closer to us than the ones we saw on Pueblo Mountain. They stopped to check us out for a little bit, then continued grazing along the hillside. We watched them for several minutes, then continued with the hike.

The trail continued into the sunshine, gradually climbing up and then flattening out a little. The tread became more rugged and tiny cairns started popping up everywhere. We followed this path down to another stream crossing, then climbed steeply up on the other side. Eventually we reached the base of Pike Knob and the path became less obvious. We picked out a lunch spot and sat down to devour our soup and trail mix.

While this was a pretty hike, it didn’t provide the stellar views we were after. So, we ditched our packs and began poking around in the terrain above us. After a few false starts and progress-halting cliff edges, we came across a route that placed us right up on top of Pike Knob. The view from the broad top of the Knob was dramatic. In front of us, the Steens Mountain headwall rose up in a hurry. Long, tumbling cascades of water poured down from the mountain top. Snow blanketed the rocky outcrops and the sun blazed overhead. We couldn’t believe our eyes. Cameras in hand, we wandered around taking pictures, striking yoga poses, and absorbing the sun. It was a great place to hang out for a while.

On the way back, we looked for the sheep again but they were long gone. It was a cold walk out of the dark canyon in the late afternoon. The only thing that was motivating me was anticipation of a soak in the hot springs on the way back to camp!