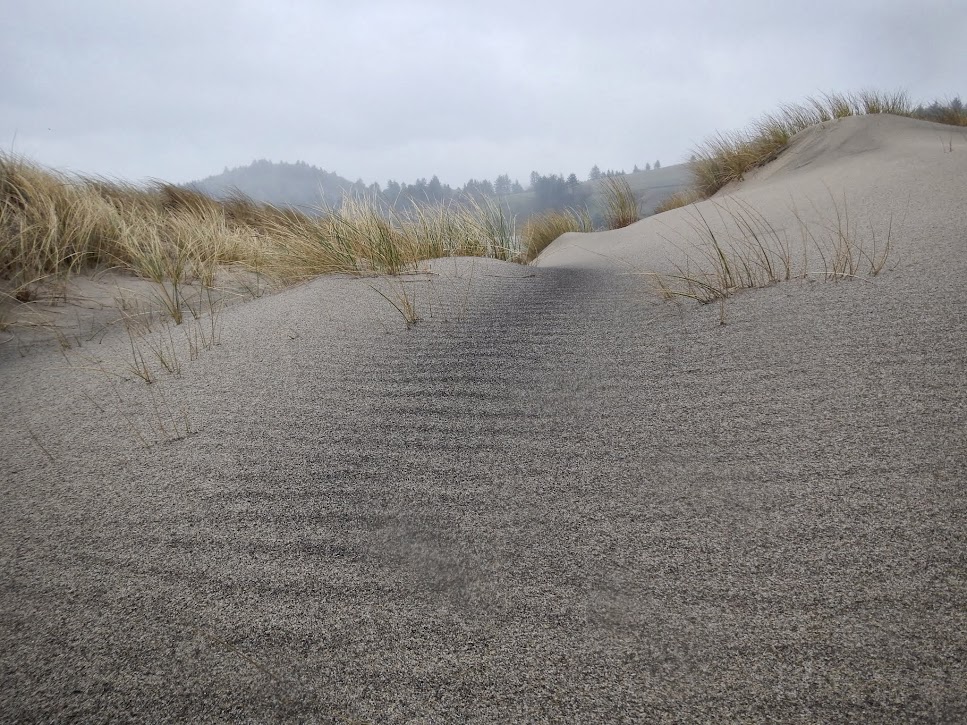 The weather was lousy everywhere, so I decided to head west. It’s usually the right thing to do. Expecting to be battered by wind and rain, I bedecked myself in duck boots and rain gear, then lined my backpack with a thick, black garbage bag. In it I carefully placed spare socks and warm layers along with the usual ten-essential type things. I parked in the barren lot at Bob Straub State Park and began the first leg of my adventure. My guidebook described a 5.5 mile walk, following the length of the spit along the water’s edge for about 2 miles to its end, then rounding the bend and walking the beach on the other side until it petered out. From there, it was a cross-country trip to return to the beach on the other side. I had intermittent flashbacks to the hell-forest at Netarts Spit that I battled through last year. I was pretty determined not to screw this one up. I walked head on into the wind as I followed the beach. Sand pelted my face as I progressed along. 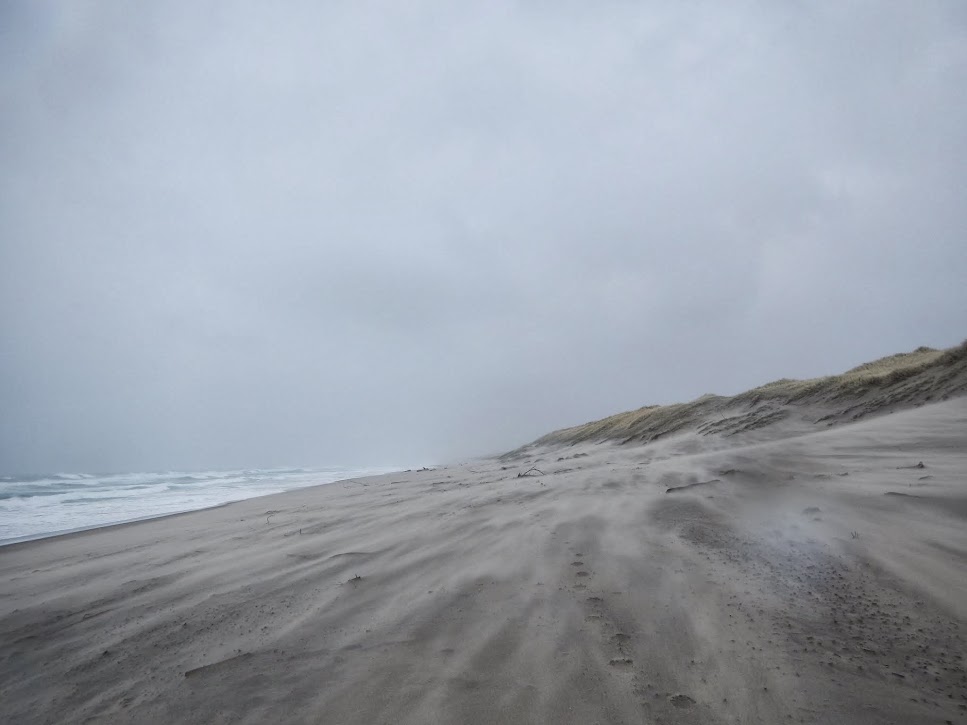 Two miles later, I approached the end of the spit. The wind picked up in little bursts, threatening to uproot me from the sand. I carried on around the corner and walked back on the opposite side. The wind was calmer here, or at least it was coming from behind me so it felt much more pleasant. Sand still whipped around in a frenzy under my feet.

According to my book, I should have been able to walk another mile or so along this side of the spit until I was forced to move inland by encroaching water. Today, the water level was high so I was unable to walk very far before retreating up the grassy banks into the dunes. There, I found a web-like network of user trails that extended throughout the upper portion of the spit. I galloped up and down the dunes for awhile, then wandered back when I saw an inviting patch of beach. 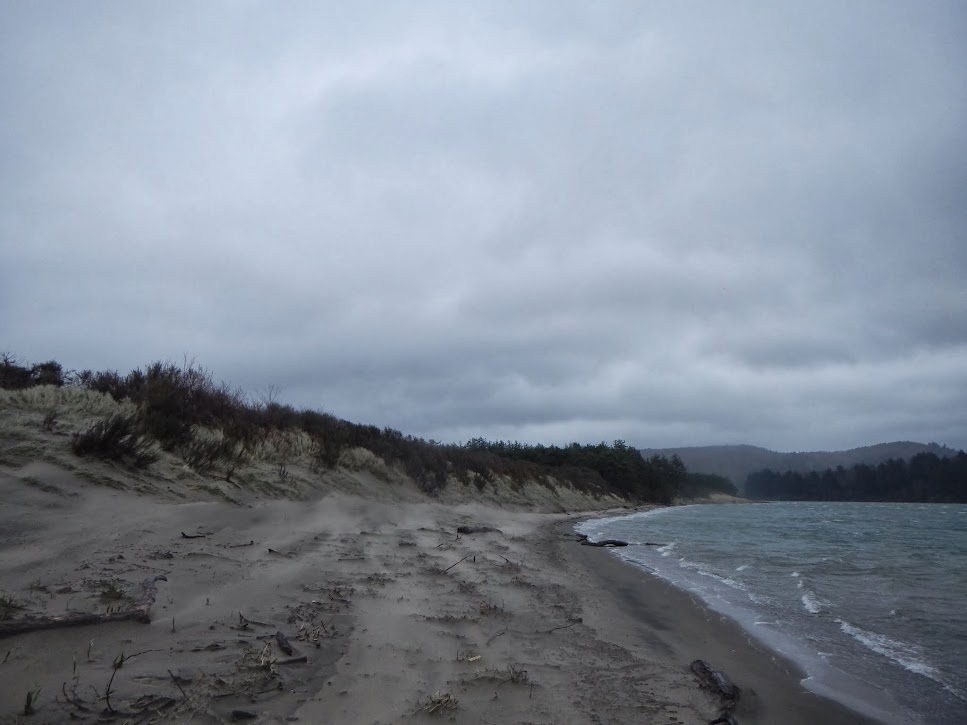 That was also short-lived, and I ran up the steep-sided slope to get to higher ground. It was a forest of gnarly beach vegetation that could have been much worse. I was able to duck beneath the branches, tunneling my way back to open territory. At last I could see the full width of the spit: a wide deflation plain decorated with red, orange and green grasses with large dunes looming on the other side. All I had to do was cross the spit and get back to the beach on the ocean side. When have I said that before…?

I walked quickly through the grass, some cross-country and some on trails. A swampy flat lay between myself and the dunes near the ocean. Somewhere I’d have to cross it. It was difficult to tell just how deep the water was, but I quickly figured out that it was deeper than my duck boots. Going barefoot was inevitable.

I trekked along, parallel to the dunes, for quite a while before I decided to make a run across the water. I removed my boots and socks, rolled up my rain pants, and took my first step into the cold water. 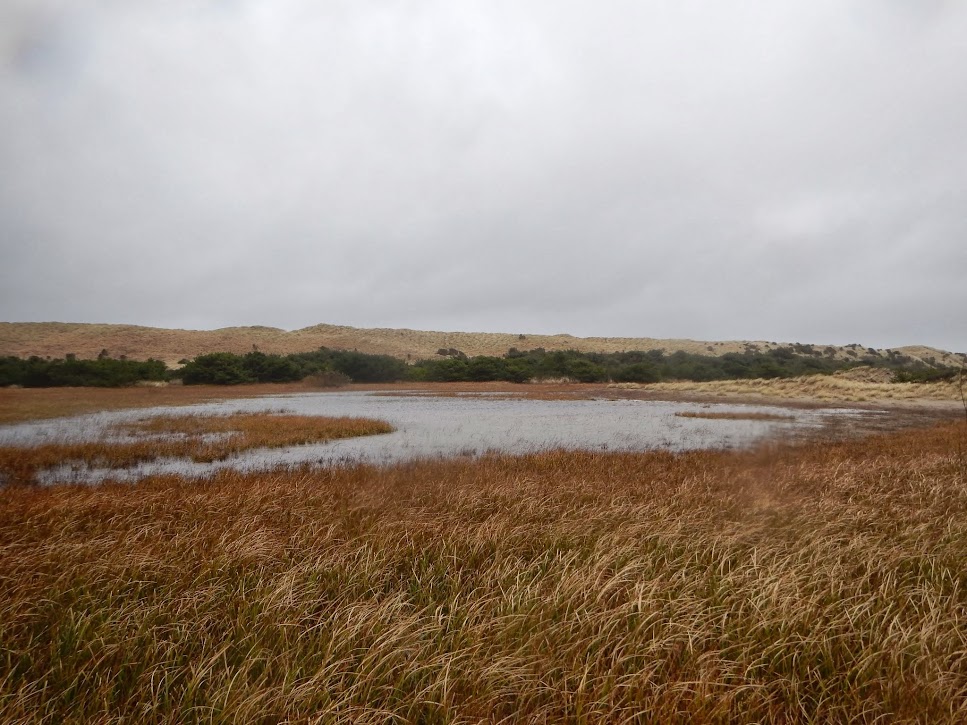 I took the short way across the first deep puddle, hoping to find a drier route across but that was simply not happening. Knowing the dunes weren’t that far away, I took a straight course through the deepest bit of the swamp, hoping that I wouldn’t step into a hole disguised in the grass. On the other side, I decided to keep my boots off and walk barefoot in the sand. The temperature wasn’t too cold and the wind was bearable. It was a nice walk back to the dunes on soft sand.

Atop the dunes, I regained views of waves crashing onto the beach. Haystack Rock emerged from the misty sea in the distance. I had no idea how close I was to the car, so I headed inland on a sandy trail that ducked down into the thick forest. Walking through claustrophobic tree tunnels, I pondered the stark contrast between flowing, expansive dunes and twisted, compact tree trunks.

Back at the car, I made a sorry attempt to dry off my feet and get most of the sand off. Then, a quick drive brought me to a parking lot at Cape Kiwanda.

There were actual humans here, which was a disappointment, but I layered up and wandered onto the beach to see what all the fuss was about. A car was parked on the beach and some tourists were lolling about. The wind was blowing with a fury. I headed towards a bluff and began climbing up a large sand dune. The wind was at my back, actually pushing me uphill as I walked. At the top of the dune, I got a great view of the ocean on the other side. Looking beneath my feet, there were incredible, tiny, wind-sculpted sand shapes that I’d never seen before. 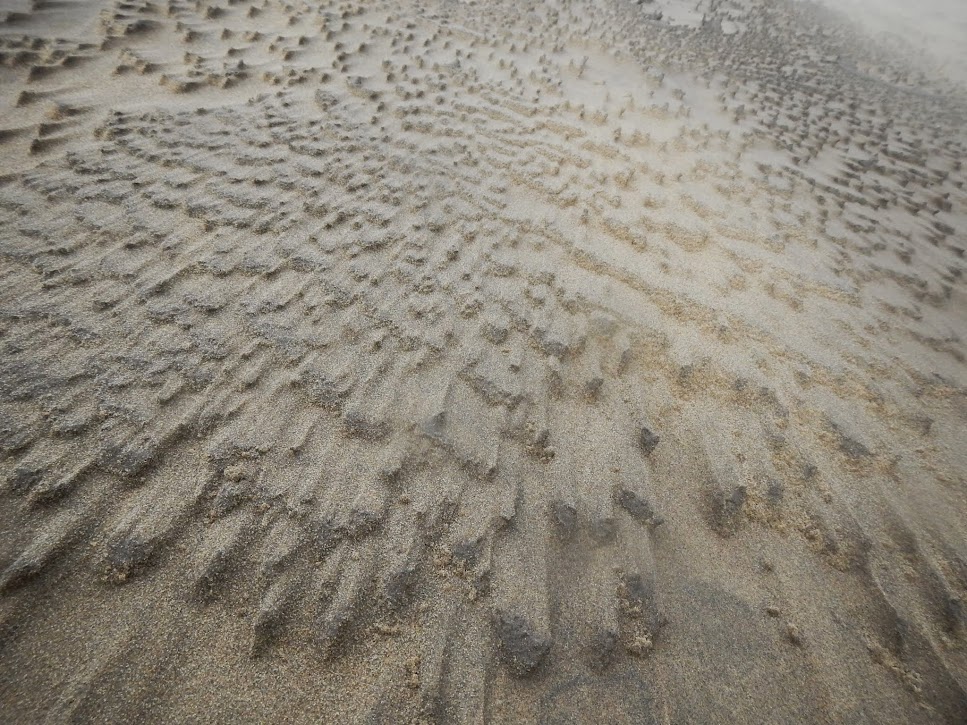 I ran crazily down the hill, because, well that’s what hills are for. The sand in my boots was grinding against my feet so I ducked out of the wind to take them off. The trudge back up the hill wasn’t as physically hard as I thought, but my sand-blasted face was pretty raw. I walked backwards and sideways as much as I could to keep the sand out of my face.

There was one more hill to conquer. I continued up to a barrier keeping folks away from the sudden edges of the bluff. It was beautiful up there. I could see the wind-and-water shaped rocks. Water crashed against the rocks and flowed through caves and channels. The combination of blowing sand, surf, and rain brought a chill to my body. The sand up here was very cold, puddly, and hard. My feet were frozen.

I ran down this hill all the way to the beach and then hightailed it to the car.

I imagine these places see lots of visitors on clear, sunny days. I felt fortunate to have experienced these gorgeous vistas in off-season conditions, and I highly recommend a trip here to anyone passing through the north/central Oregon coast.