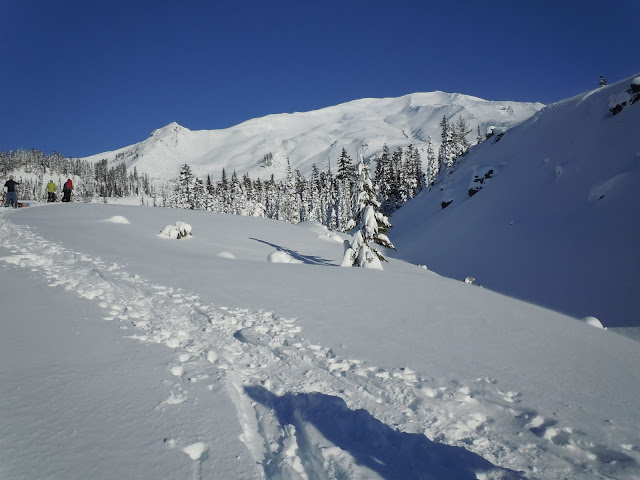 I had been waiting for this day. It had been cloudy and raining or snowing for the past few weekends, which kept me off the volcanoes. I had grown tired of hiking in the Gorge. So when my friend Matt mentioned he was thinking of taking his fiancee Kara up here I invited myself along.

We strapped on snowshoes and left the trailhead around 7:30am to get the most sunlight out of the day. The trailhead wasn’t yet filled with snowmobile fumes and revving engines. We moseyed up the relatively level ski trails through the trees, taking some time to adjust layers to walking in the chilly air. It didn’t take long to leave the forested ski trails and emerge into the vast open spaces present on St. Helens’ southern flanks. We played leapfrog with several groups of skiers, snowboarders and snowshoers as we progressed in a series of fits and spurts. The wind became more aggressive as we moved from the shelter of trees, so zippers were zipped and hats were pulled on tight. I was getting really cold waiting for my partners to catch up, so I asked if it was ok to meet them at the top. I got the go-ahead and pushed on solo.

I rather enjoy climbing this way, being totally selfish and independent. I know it is probably not the best way to climb, certainly in technical terrain, but St. Helens never really gets that steep or difficult, plus there were plenty of people around. Better able to regulate my temperature now, I moved more efficiently, one foot in front of the other, all the way to the summit. 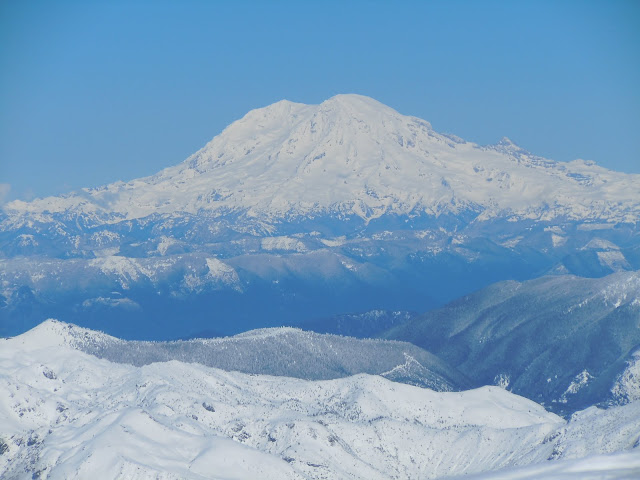 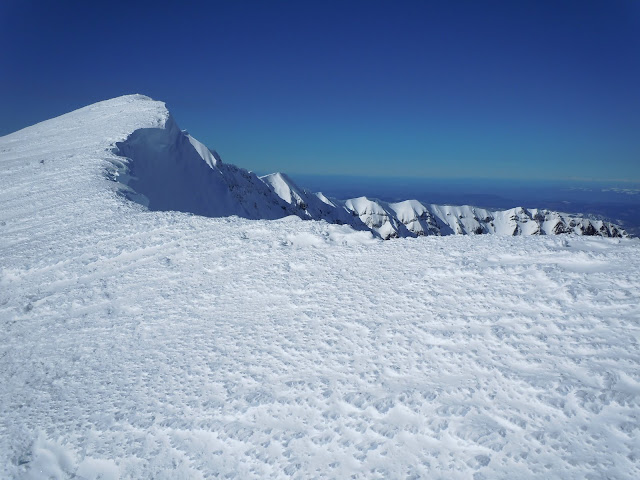 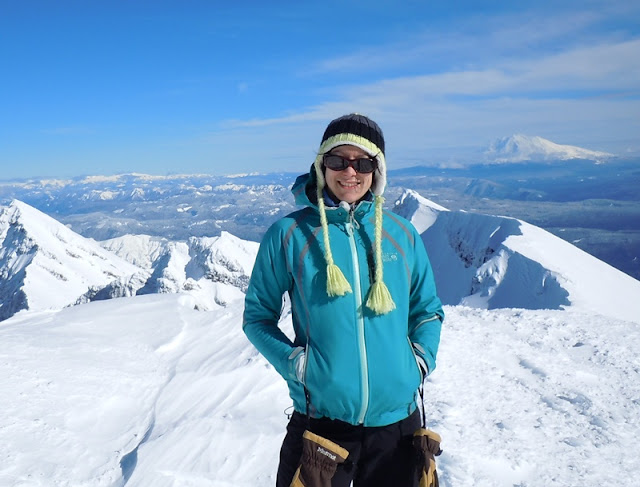 By the time I arrived, the wind had died down to zero and the sun was sending warm, welcoming rays down to all of us resting on the crater rim. It was lovely. I timidly walked towards the edge, being mindful of the fact that large cornices often form there, and stole views of Mt. Rainier, Spirit Lake, and Mt. Adams. The scenery was spectacular. The previous two times I had been at this very spot I was unable to see much of anything. Now, finally, I reaped my reward. I sent a SPOT transmission to family and friends to let them know my location and sat down to consume a packet of Green Curry Tuna from Trader Joe’s. YUM. TJ’s is the ultimate one-stop-shopping for ready to eat, quality food that packs nicely for the trail.

Eventually, Matt and Kara reached the summit and also took their time taking photos and refueling. Wanting to give them an equal opportunity at R&R, I took Matt’s car keys and headed down the slopes alone. I had gotten close to an hour of rest and I was ready to get to my beer and Girl Scout cookies calling my name from the parking lot.

The snow had softened, and the going down was generally easy. Some abrupt patches of ice underlay drifted powder, which was a bit jarring on my knees. But overall my rusty joints handled the terrain pretty well, boosting my confidence for success on more technically demanding winter climbs. I was surprised by the number of folks heading up as I descended. I left the top just after 1 pm, and for the next couple of hours, stopped to chat with a number of people, mostly on snowshoes (and one guy in crampons!) who were determined to make it to the top. I tried my best to offer a dose of reality by saying things like, “do you guys have headlamps?” in hopes that at least some of the groups would realize there wasn’t enough daylight at the pace they were moving to get up and back in a reasonable time. I noticed that almost all the slow groups contained at least one person wearing Army camo- something…pants, hats, whatever. Just an observation. 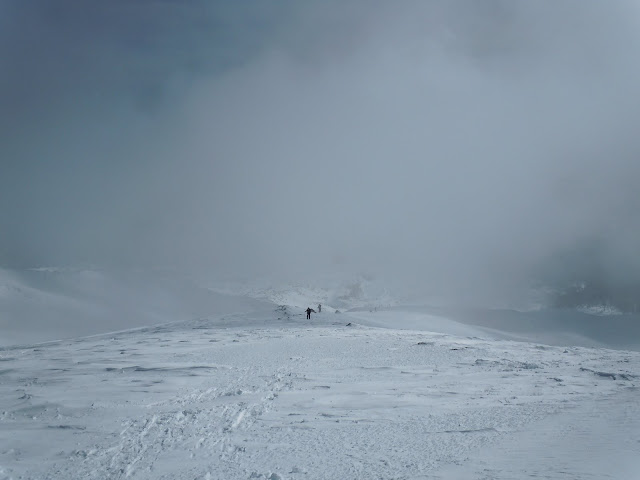 I was glad to get back to the trees, which provided a sign that I was nearly done with the walking. It was much colder here, though, so the heavy mittens and hand warmers came back out as I cinched every opening to my jacket tight and swallowed some more calories to keep the internal fire burning. There had been a gap of time where I saw few people, but as I approached the flatter ski trails I began encountering families and other small groups who were just out for a short, quick walk or ski. As I burst from the woods into the clearing of the Sno-Park I was warmed once again by the afternoon sun. Hooray! I was able to lay out my gear to dry, stretch, drink a beer, refuel, and rest my eyes before my climbing partners returned to the car. It was another fantastic day. We topped it off with a greasy meal of pub food at the Cougar Bar and Grill before driving off into the sunset.