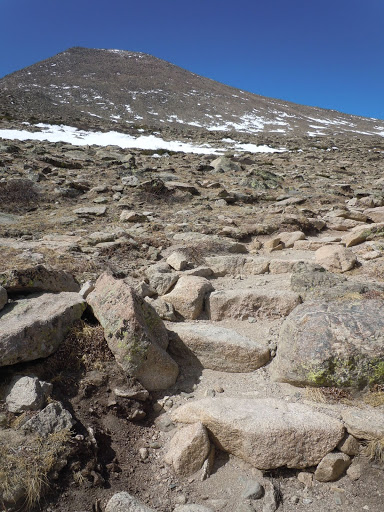 The low snow year in the Front Range made this hike accessible to a couple of travelers who didn’t pack for mountain climbing. Sue and I left the empty trailhead in trail shoes and all the clothes we had in our carry-on luggage. I had brought a compass and first aid kit in anticipation of getting out on a hike. We borrowed some handwarmers and one set of hiking poles from Sue’s mom, and felt we were ready to take on this 13,000 foot peak. 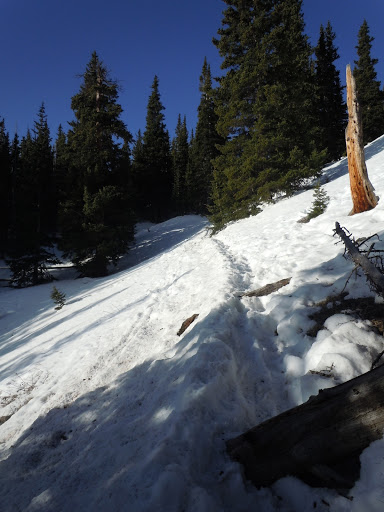 The trail was immediately snow covered but the surface was hard-packed. Sue and I split up the hiking poles so we each had one and hoped the traction of our shoes would be good enough. In less than an hour we reached the start of the alpine tundra, as designated by a handy sign. It reminded me of being back in the White Mountains of New Hampshire. We followed the trail as best we could, then retraced the steps of the last folks who came up this way and were nice enough to pack the snow down. We finally left the last tree behind and came out into a wide expanse of rock and snow. The wind was blowing consistently at about 10 mph but the sun was warm, which made the wind bearable. 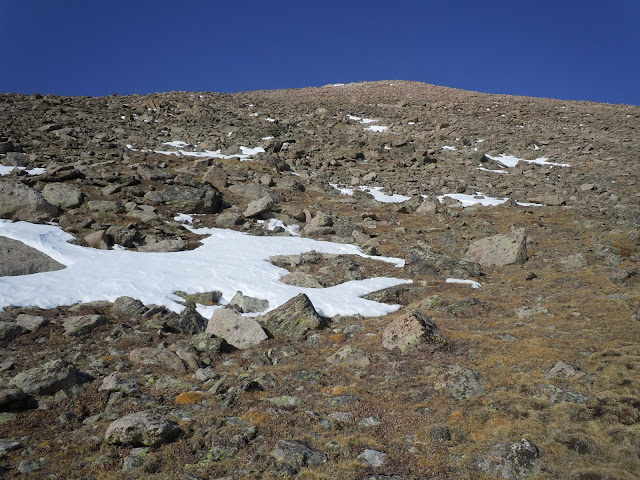 The route description on SummitPost said to go up the boulder-strewn east slope to the top. This was going to be the easiest navigation ever. We left the trail where it became lost in intermittent snow and vegetation patches, tracing a straight-ish line through the massive boulders towards the top of the peak. To our left towered Mt. Meeker and Longs Peak, which we could barely see over the broad slopes of Mt. Lady Washington. My whole world was now filled with boulders. Bits of snow lingered between them; I zig-zagged back and forth among the rockpile, avoiding snow, and looking back to make sure I hadn’t lost Sue. As we ascended, the wind got steadily more noticeable and the air temperature dropped. I stopped every now and again to add another layer or cinch down my jacket’s hood, until all my layers were on and no more adjustments were possible. My legs were getting cold but my core was toasty warm.

Finally, I could see more sky than rock and I knew the summit ridge was close. I yelled down at Sue that we were almost there, but she had to come up really close to hear me since the wind was blowing so hard. We topped out on the ridge and were immediately blasted with a wall of fiercely blowing wind. Based on NOAA’s wind speed estimation chart, I’d say the average wind speed was about 35-40mph with gusts another 5-10 mph more. It became difficult to walk and my face felt frozen. 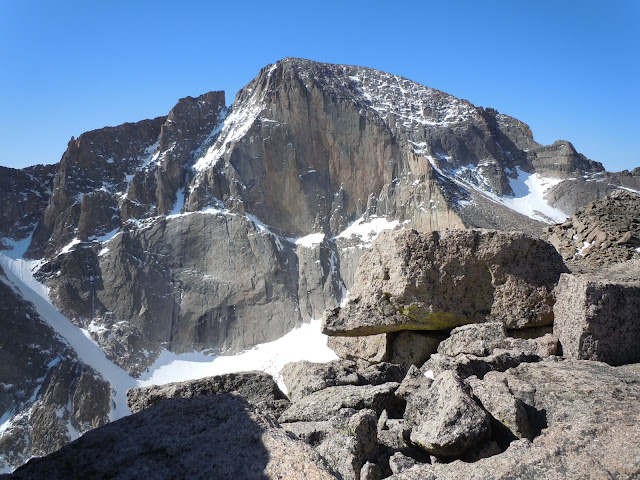 Sue and I made slow progress along the top. I could tell that this was not Sue’s favorite place to be but I was loving every second of it. Soon she made some hand signals to me that she would not go any further. I gave her a huge smile and big thumbs up as I continued along into the wind. I had to walk sideways with my hands against the rock and my back to the wind so I wouldn’t get blown off my feet. Occasionally I needed to stop and let the gusts die down a bit before taking another step. It was SO AWESOME! I could see the top of the peak, and I knew once I descended a bit I would be out of this hellish wind. As I pushed on I felt incredibly alive and present in the moment. I remember briefly turning into the wind to get a different view and it literally took my breath away–the wind was whipping so hard I couldn’t breathe. Another few sideways steps and I found myself just below the summit boulder, which is where I stayed to take some photos, scream into the wind, and check out the most amazing view of the Diamond on Long’s Peak. WOOHOO!!!! 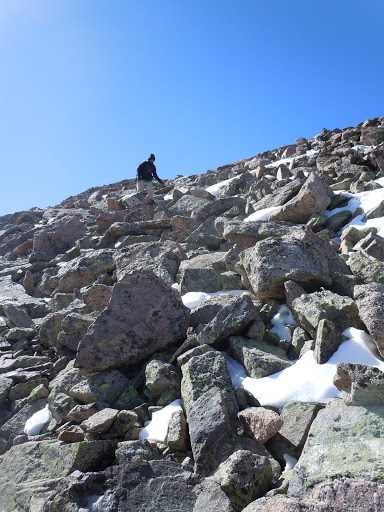 Sue was probably freezing her butt off waiting for me, so I retreated as fast as I could back to where we parted ways. We decided to follow the north ridge down, since it was less steep than the eastern slope. The downside of this route was that we were not buffered from the forceful winds blowing in from the west. I utilized the crab walk technique to descend into less windy terrain. I had to stop for a bathroom break on the way down and noticed the skin on my legs was bright red from being assaulted by the wind. Nuts! We were both happy to make it back to the trail and into the more predictable 10mph wind, where we sat, de-layered, and ate some snacks. 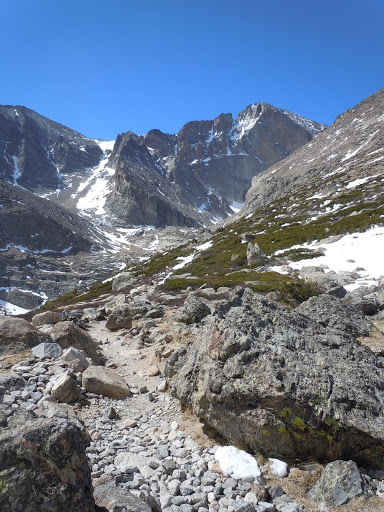 I was absolutely amazed that we hadn’t seen anyone so far this entire day. The mountain was peaceful, enjoyable, and majestically scenic. A short walk along the trail brought us back to the junction where the trail went down to Chasm Lake. From there we had excellent views of the three peaks: Lady Washington, Longs and Meeker. It was really hard to turn around to go home. Sue led us out along the trail, or long staircase built into the moraine, until we lost the trail in snow. We followed footprints through deep snow that led us into the woods a very different way than we came up. Luckily, the prints brought us back to the trail proper and we made it back to the car in no time at all. The snow was packed pretty hard and was very slippery, so Sue took the poles and I used a fallen branch as a stabilizer during the last segment of our walk. 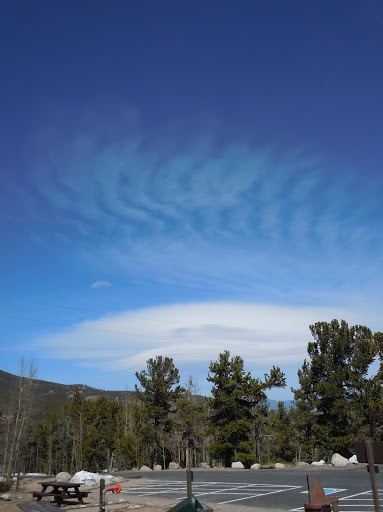 There were only a few cars in the lot when we returned. We passed two dayhikers as we descended into the forest. I still can’t believe that we were able to find solitude near Long’s Peak. Everything I’d read about this area mentioned the popularity and the crowds.

I’d say that, by far, this hike was the highlight of my Colorado trip. Having beautiful weather, some excitement from mother nature, spectacular views, a great hiking partner, and solitude made this trip one to remember. I can’t wait for another opportunity to explore the Rocky Mountains in Colorado.

See the photos from the entire trip on Picasa.