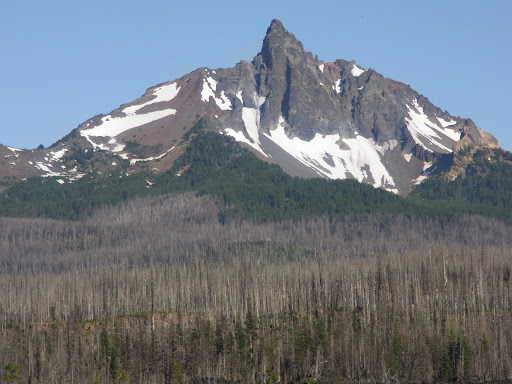 I got out of the tent at a lazy 8am. The mosquitoes had arranged themselves in a tactical formation around my tent so as to help me welcome in the new day. I hurried to break camp, stopping only to douse my bare skin with some insect repellent, which the bugs seemed to enjoy very much.

After driving away, hunger pangs soon distracted me and so I pulled off at a viewpoint of Mt. Washington to eat breakfast. I sat on a rock wall, legs dangling above the lava, as I happily ate some granola with reconstituted powdered milk and freshly picked blueberries. The sun shone warmly over the awesome scene, making my humble breakfast seem awfully grand. 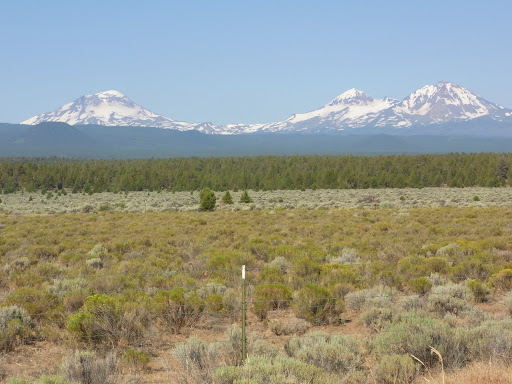 I drove on to the Lava Lands Visitor Center for some hike suggestions and to refill my water supply. The ranger recommended a short walk starting at the Benton Falls Trailhead. I arrived, packed a small bag and started down the trail. About three seconds later the mosquito welcoming committee arrived; I had inadvertantly signed up for a blood drive. They were so persistent that I hoofed it back to the car, sprayed the most toxic DEET product I had in my stockpile (you know, the stuff in the little orange bottle that will melt plastic) and tried again. This time I managed to eke out 10 feet of walking before they again stopped me dead in my tracks. Not willing to endure a constant assault of proboscises penetrating my skin, I decided to bag the hike and travel elsewhere.

Next I tried my luck at the Lava River Cave. For $4 I was able to rent a propane lantern and head down into the heavenly, frigid and bug-free resort, er, lava tube. This sucker is a mile long! I took my time descending the stairs and traveling over sometimes uneven footing. After what was probably less than a half a mile, I got the point of it all and decided to turn around. Lava tubes aren’t all that exciting to walk through but the concept is really interesting.

Re-entering the heat of the midday was less interesting so I made a sandwich and sat under the shade of a Ponderosa Pine in the picnic area outside the cave. It felt really good to stretch out my left leg after having it strapped in a 90 degree bend for the last hour or so. I was glad that it didn’t come down to fists to defend my lunch from the aggressive and obviously well-fed (but not well-mannered) chipmunks lurking in the grass. 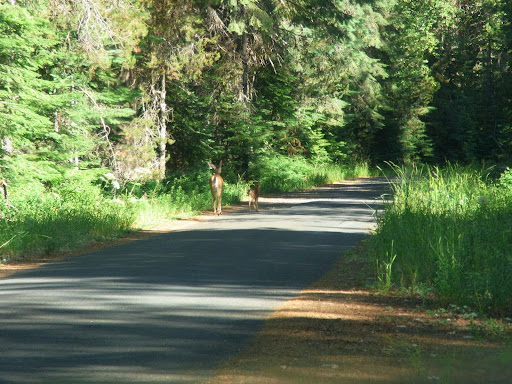 Feeling like today was a lounge-around-reading-under-a-tree day, I got in the car with the intention of securing a nice, free campsite off the main road. I made several unsuccessful attempts in this pursuit, requiring miles of extra driving, until I finally settled on some long-forgotten campground a few miles down a lonely forest road. Again, I made haste in setting up my tent and diving inside. Thunder rumbled in the distance. The forest was in a state of “extreme” fire danger; I was not too excited to be camping in such a lonely place inside a giant tinderbox with lit matches threatening to fall from the sky. Swarms of mosquitoes flew in clouds around my tent, dreaming about my blood. I was really hungry, but I couldn’t build a fire and I didn’t want to fumble around with my camp stove while being eaten alive by insects. It was too hot to wear long sleeves for long; I was melting after just setting up my tent wearing long pants and a hooded jacket. Plus, all this whining makes for a better story.

I had the foresight to bring a bag of potato chips into the tent with me so that became my dinner. I nervously listened to the booms of thunder and buzz of mosquito wingbeats, wondering which monster would take me down tonight.

It was a long, no, a VERY long night of being cooped up, anxious, in the tent. But the storms never came and I lived to tell my tale. It was time to pack up and continue my trip.