Ramblin’ around at Mickey Hot Springs and Mann Lake (no trails) Sullivan casually mentions Mickey Hot Springs in the yellow guidebook, and this sort of mystery grabbed my attention. Since we were all the way out here, I supposed, we may as well go see what there is to see.

Several gravel roads later, we arrived at Mickey Hot Springs. There was a tiny parking area, and a plethora of warning signs telling us that we were certain to die if we walked beyond the fence. Cameras in hand, we headed towards the steaming vents in the ground.

The place was eerie. There were no developed pathways so it was a total free-for-all. There were many footprints left in the earth, and I scanned for paths that had footprints heading in each direction. That way I hoped to minimize my chances of being swallowed up into the boiling cauldron lurking beneath my feet. Aaron was a bit more adventurous than me, and so I followed his footsteps. 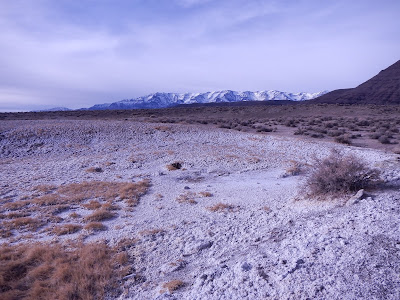 The earth gurgled and simmered around us. There were pools of algae surrounded by crusty, white mineral formations. There were mounds that rose up and holes that sunk down. There were patches of matted, yellow grass. There was not an animal in sight. 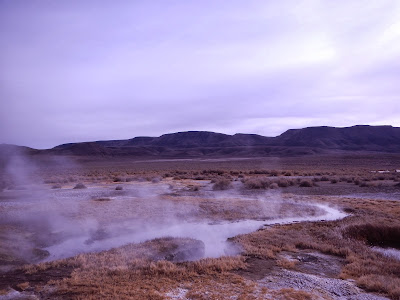 After wandering around for about 45 minutes, we called it and drove back up the road to have lunch. We had spied a dry lakebed nearby that looked like as good a place as any to refuel. Our boots sunk into the unusual soil as we headed off to find the perfect spot to perch on our camp chairs and make sandwiches. It was chilly, but the sun was out, and we rather enjoyed a quiet lunch in this desolate place.

Next stop: Mann Lake Recreation Area. Why? It was on the way to Crane, where we were going to soak in the hot springs before finding a place to camp. Mann Lake is located just off the main road heading out of the Steens. We pulled in and drove up to the lake, locating some short trails leading to the lake. The lake was clearly a favorite of the local cattle herd; the muddy ground was pitted with deep hoof-prints. We arrived at the lake to find it totally frozen over. It was actually easier to walk on the ice than on the pock-marked, muddy shoreline. In the right season, this would be a great place to see birds. In December, it felt abandoned. 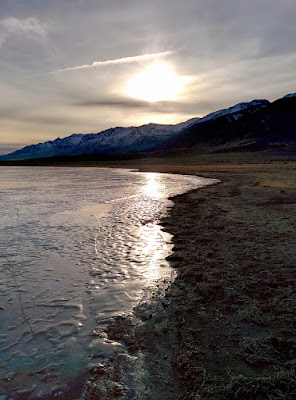 When traveling along the eastern side of the Steens, it is worth it to take a couple of short detours to these places. There’s no reason to miss Mann Lake, since it’s a stone’s throw from the road. Mickey Hot Springs is a bit more of a drive, but maybe just stop and ask yourself: why the rush?