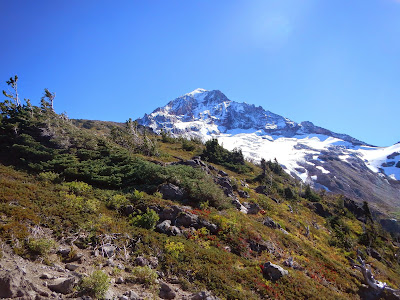 I was fortunate to end up with a glorious weather day on this autumn Mazama hike. See, you have to plan these things out way in advance to get a hike on the Mazama schedule so I was rolling the dice. And with a full roster of sign ups I was really hoping for decent weather. Well, I must have made the right sacrifice to the weather gods.

It was chilly when we began, but the steady uphill walk helped to warm us up. Soon, we reached a confusing 4-way junction and chose the section of Timberline Trail that traverses around the south side of Bald Mountain. This way, we had the opportunity to stop and rest at a couple of stunning viewpoints of Mt. Hood. There were several nice cameras among our group, so we took every chance we got to take pictures in the bright sunlight.

After that, we found the shortcut back to the other portion of Timberline Trail that would take us up to McNeil Point. For the next few miles, we gradually gained elevation as we followed the forested trail through the wilderness. Our group was friendly, chatty and very diverse. Among us were visiting students from Chicago, longtime Oregonians and some newcomers to the Portland area. 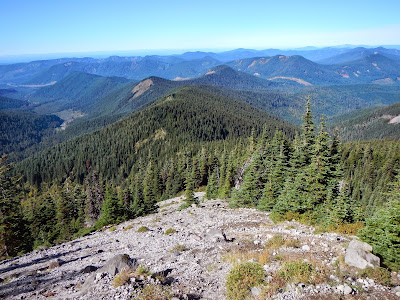 The group decided they wanted to take the short but steep scramble route instead of the official, meandering route to the shelter. It wasn’t so bad, and it added some interest to the walk in the woods. We followed rock talus and dirt through ever-shortening trees as we trudged up to the shelter. Once out of the woods, we popped up onto a beautiful overlook above the Muddy Fork canyon. Above us, Mt. Hood rose up majestically, her glaciers gleaming and sparkling in the sunlight. The group split in two, with half of us hanging out right there and the other half adventuring up to the point. I enjoyed a lazy rest near the shelter, eating my lunch, taking pictures and stretching my legs. 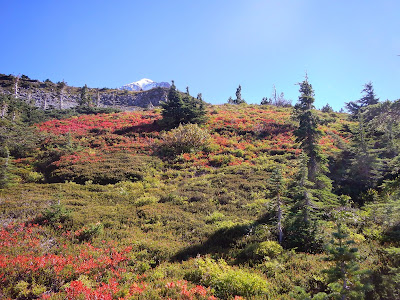 As we rose to head for home, I thought the best part was behind us. We took the long way down instead of retracing our steps on the scramble path. This route switchbacked through one meadow after another, where the red leaves of huckleberry bushes looked like fire. Behind us, the views of Mt. Hood never subsided. It was a picturesque walk; it was hard not to stop and take it all in every few steps. But we were on a mission to return to the trailhead.

On the way down we passed several cheerful groups and families on their way up to enjoy this special place. I felt lucky to be up there on a Friday in the fall, when crowds were surely at their lowest, and our group was able to take over the viewpoint without disturbing any other visitors.

This was a great way to kick off my fall hiking schedule. I can only hope that subsequent hikes can live up to the quality of this one.