Christmas morning. As a kid I remember anticipating rushing downstairs to see the lights blinking on the tree, shiny presents piled up under its branches. My brother and I were allowed to dump out the contents of our stockings before my parents woke up, so we ate candy and played until the sun rose and my parents awoke from their slumber. We’d open presents and then wait for the cinnamon rolls to come out of the oven. There was a mad sugar rush that started early and lasted for the entire day.

On this Christmas morning I awoke with a different excitement. For breakfast, I snacked on the various dried fruits and other treats my parents mailed me the day before I left Portland. I didn’t want to fiddle with the stove on yet another subzero morning. I drove back out to the cabin and parked at the entrance to Dago Gulch for one last hike before leaving this pristine canyon wonderland. 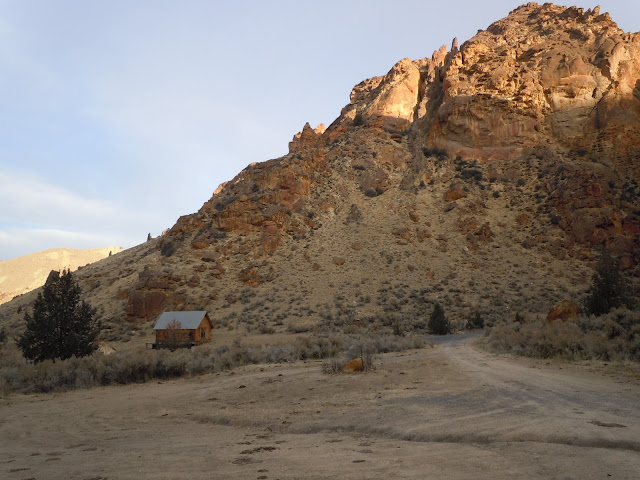 I stepped out of the car, already forgetting how cold the air was. I stuffed my head into a balaclava, put on the obligatory Santa hat, zipped up the pink puffy and walked quickly up the old road. It was so cold I had to walk quickly to stay warm. I had heard about the bighorn sheep population that resided in Leslie Gulch but I very much doubted I would be able to see any wildlife at a pace like this. Oh well, I was happy to be able to walk around a bit, knowing that today would be a crazy driving-down-gravel-roads day. I never liked walking on roads, so after about 15 minutes, I called it good and turned back towards the car. I’d realized that I’d forgotten my camp chair back at the campsite, which meant nearly 10 miles of backtracking and two more trips over the worst part of the road in my car. Poor Scion. My head wasn’t in it. As I was furiously marching along the road, I heard something big flush out of the bushes to the right of the trail. Startled, I looked up to see two coyotes booking it up the side of the canyon. I stood there, frozen, as I watched the graceful beasts get as far away from me as they could. There was no time to take a picture, since I knew they’d be gone before long. I watched them disappear into the brush, and then continued marching back to my car. 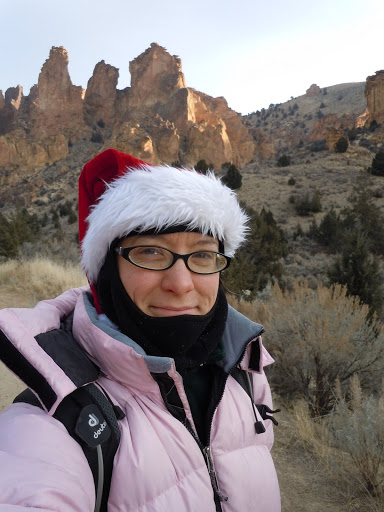 I drove for a couple hours, swinging through Jordan Valley for gas, then spending more time with my good friend the gravel road on the way to Jordan Craters. Jordan Craters is a BLM site that includes a relatively recent basalt lava flow. The only notable feature on the tour brochure is Coffeepot Crater. The last mile of the road to Coffeepot Crater is recommended for 4-wheel drive vehicles but the Scion rose to the challenge again. In the parking lot I fired up the stove to melt what little ice I could extract from my Camelback so I would have enough water for a hike. After knocking the pot over and spilling half of my precious supply, I ended up with about a half-liter to ration throughout the day. 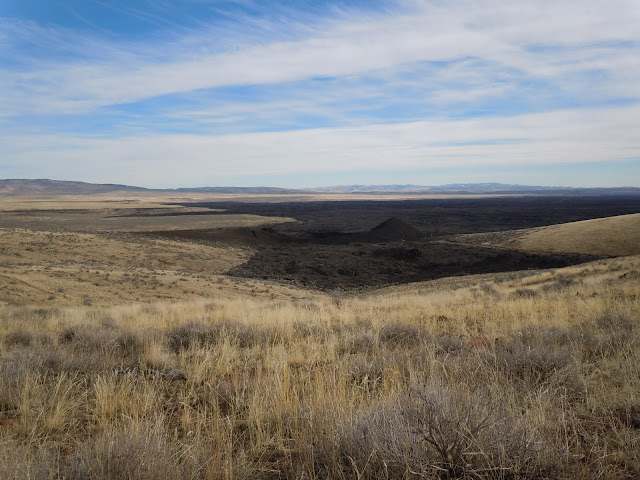 The official marked trail system at Jordan Craters is one mile long. I decided to spice things up a bit by doing some cross-country travel. The landscape was mostly flat, with the one large hill near the parking lot serving as a landmark. I started to the right of the hill, walked along the edge of the lava, then turned to walk across the lava’s surface. It reminded me of a long-forgotten asphalt basketball court that had buckled and cracked through years of disrepair. I stooped to look at the shapes created by the ancient lava flow: streams, holes, bubbles, clamshells, ribbons, pockets, and waves. Hopping from one fold to the next I found myself feeling much like a little kid, exploring this alien landscape.

When I had my fill of the lava field I veered back towards Coffeepot crater. The Sullivan guide mentioned a way to get down to the bottom of the crater, but it looked sketchy from every angle. I jumped the gun and began following what looked like a faint footpath into the crater. All the rock was loose and slippery; even the vertical rock walls looked like they could crumble at any second. I’d wished I’d had a helmet with me, although if any rockfall hit my head I’d probably be in big trouble with or without a helmet. Once safely at the bottom of the crater, I walked around on the shifting piles of gravel, rock and debris. It was really cool down there; the video doesn’t do it much justice. In my exploration I noticed what looked like a moderately sloping path up the talus to the crater’s edge. So, that’s the trail, eh… 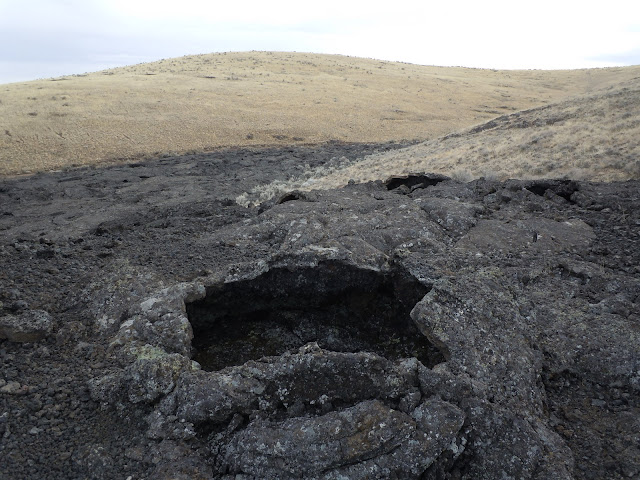 At the surface I took two more detours: one path led straight back into the lava field along another swath of grass, and another path led towards a row of spatter cones visible from the road. The cones made interesting shapes as they jutted up from the black waves of lava. They were colorful, too: red minerals were much more vivid in these amorphous projections of lava. The footing was not as nice near the cones, and I’d pretty much had it with my adventure. After taking some pictures I made a run for the road and walked back to the car.

Lots more driving brought me to Antelope Reservoir, where I’d camp for the night. A small BLM campground sat perched on the edge of the beach, with three open campsites available. I was really excited to have a lake full of fresh water to resupply my empty bottle, but my excitement dimmed as soon as I stepped out of the car. I could hear that the lake was frozen. Hoping I was wrong, I grabbed two bottles and walked across the rocks to the lake shore. Crap, I was right. The whole thing was frozen solid. 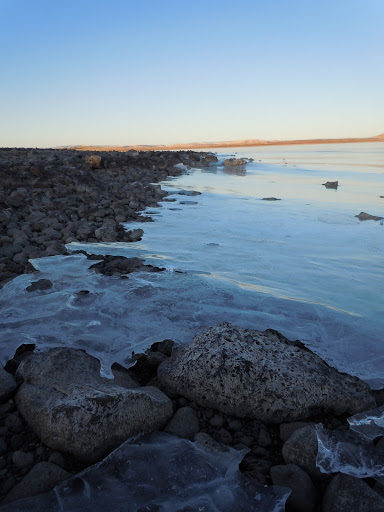 I walked back to my campsite with a new plan. I emptied out a nylon shopping bag and went back to the lake to gather ice. In no time I had smashed enough ice along the frozen water’s edge to fill up the bag. Back at the picnic table, I fired up the camp stove and began the mundane task of melting ice, then pouring it through my high-tech bandana filter to extract the pebbly bits from the water.

While all that was happening, I scoured the area for wood. Dried, sun-bleached sage branches lined the beach. There wasn’t much big stuff to gather, but after some creative harvesting I managed a reasonable pile of fuel for the evening.