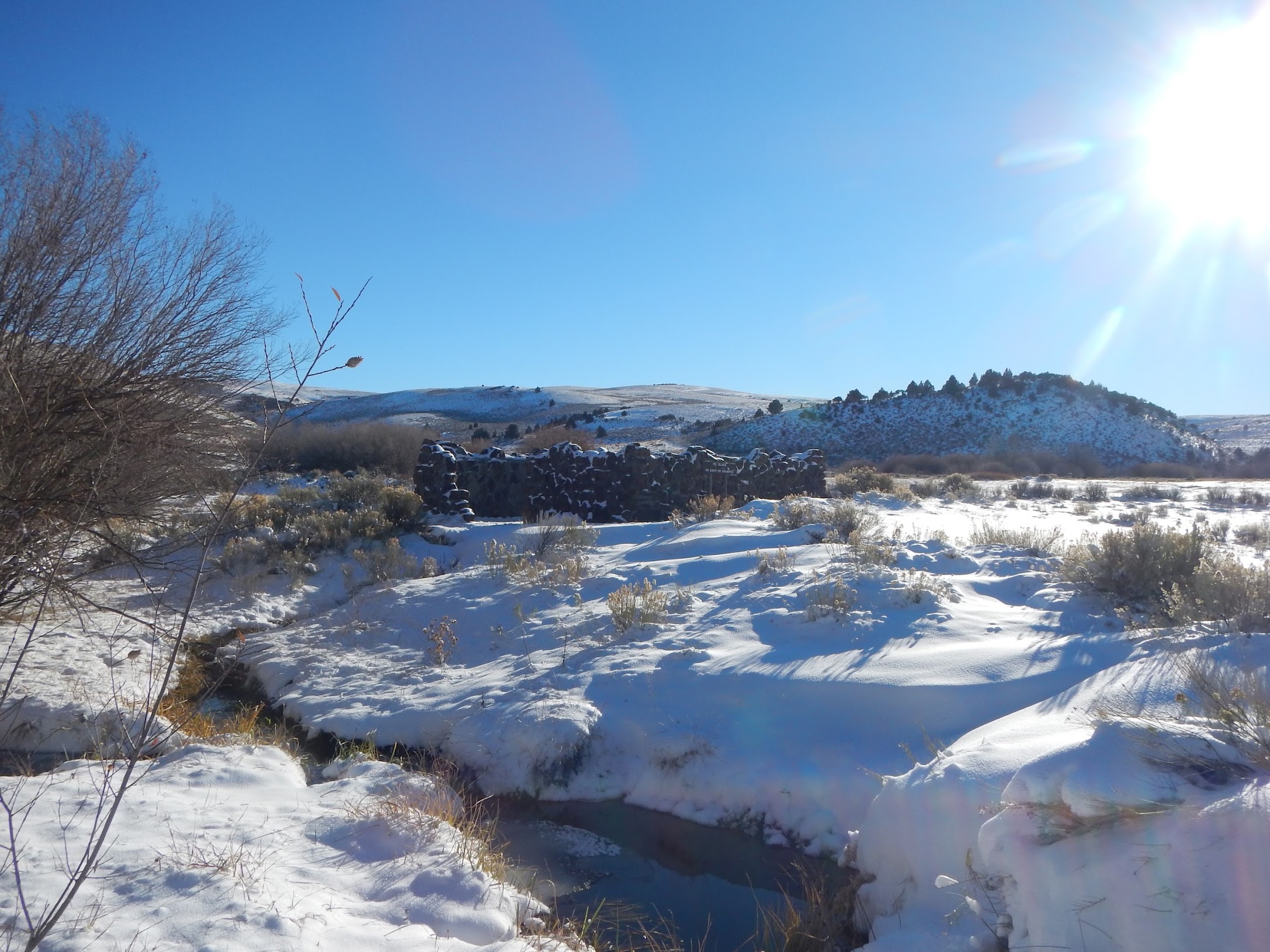 Photos on Google Photos (no captions) or Picasa (captions).

Since 2009, Thanksgiving weekend was an excuse to bail out of social engagements for a few days and retreat into the forest. For six years, I hosted this personal retreat at a cabin in the Willamette National Forest. But this year I decided to do things a little differently. Looking for solitude, we pushed eastward and headed toward the Hart Mountain Antelope Refuge.

We broke up the drive and camped at Marster Springs Campground outside of Paisley. The road was very snowy and it was a miracle that we could actually drive to the campground in the car. We set up camp in the dark, ate a quick meal and turned in for the night.

We woke up and looked at the frozen thermometer: it was a few degrees below zero. The air was frigid, and we only began to feel human again once the sun crested over the nearby peaks. 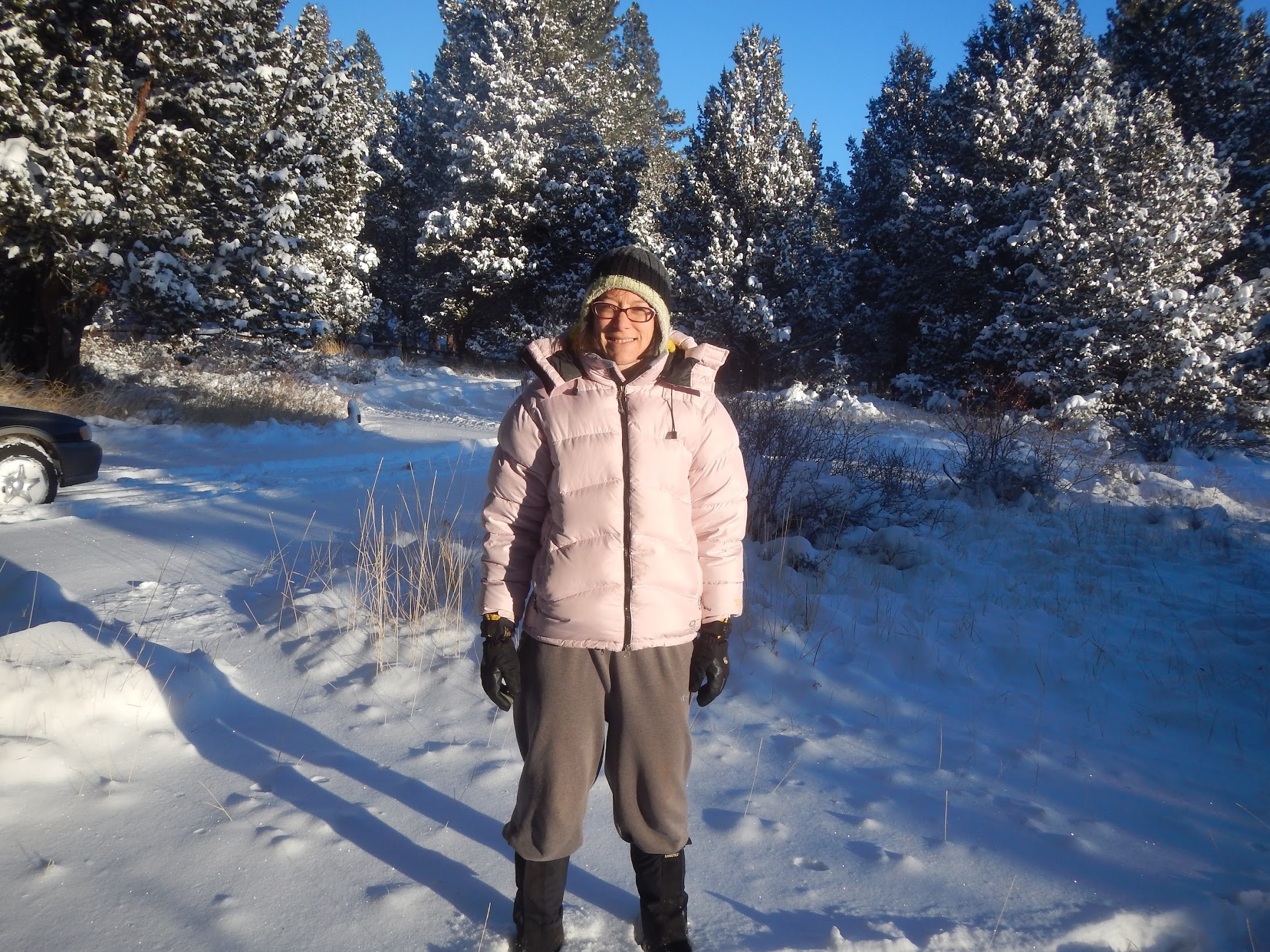 On we drove, taking a quick stop at the Warner Wetlands to use the restroom and practice some handstands. You go a little loopy sitting in a car that long. Then began the long and winding ascent up to the Hart Mountain plateau, until we eventually crested the top of it and chose a campsite. 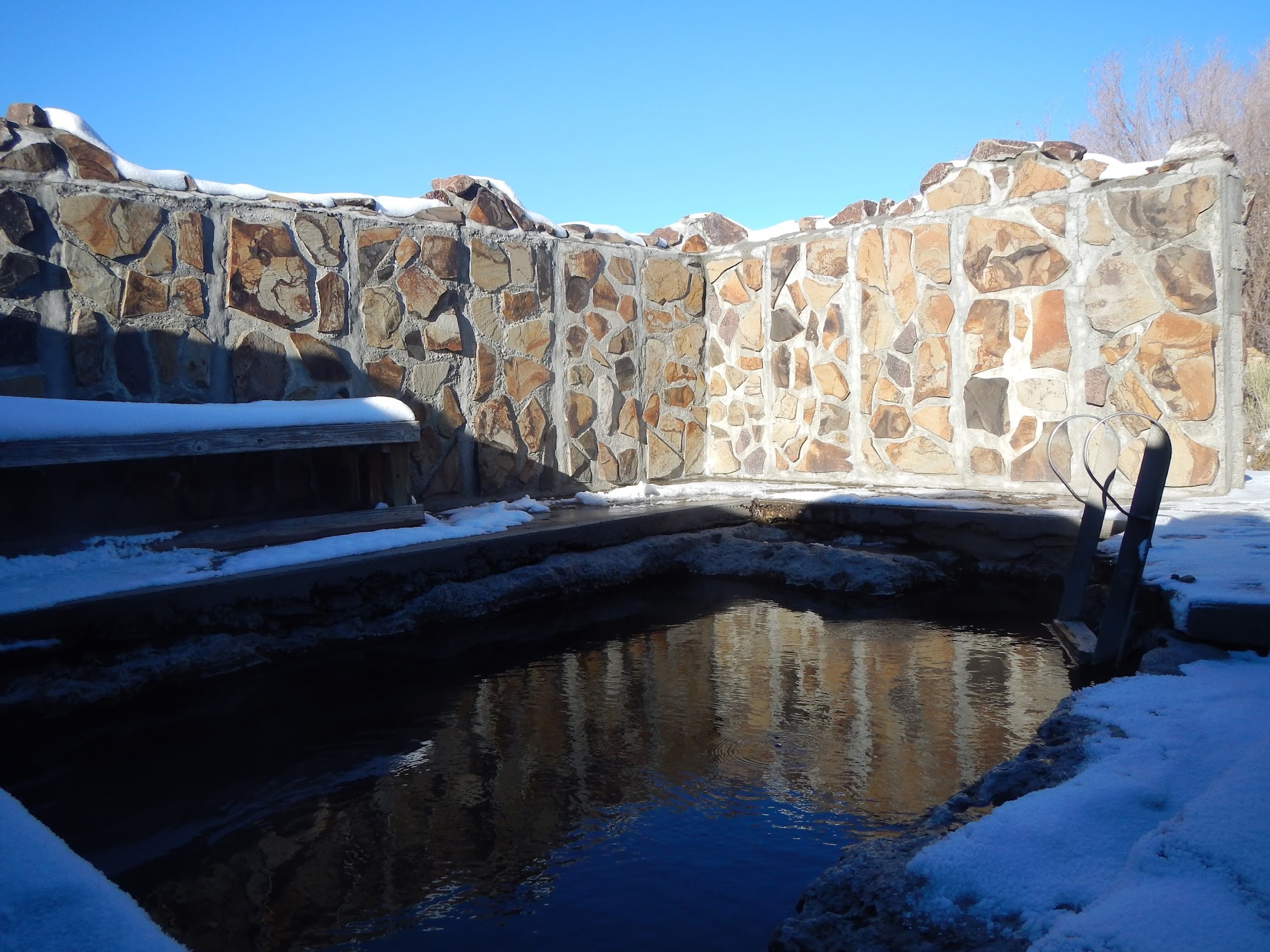 It felt like such a treat to set up camp in the middle of the day. The sun felt warm, we could see without the aid of a headlamp, and we had lots of space to spread out. We dug out some paths in the snow, set up the tent and kitchen area, changed clothes, and greeted our chukar neighbors. Then, we scoped out the hot springs and took a little walk around the camp area before it was time to make dinner.

Thanksgiving dinner is a spectacle, whether I’m in the city or the backcountry. I had 2 pots, a skillet, a camp stove and a fire pit. It was time to get to work. I strategically warmed up our feast, which included: 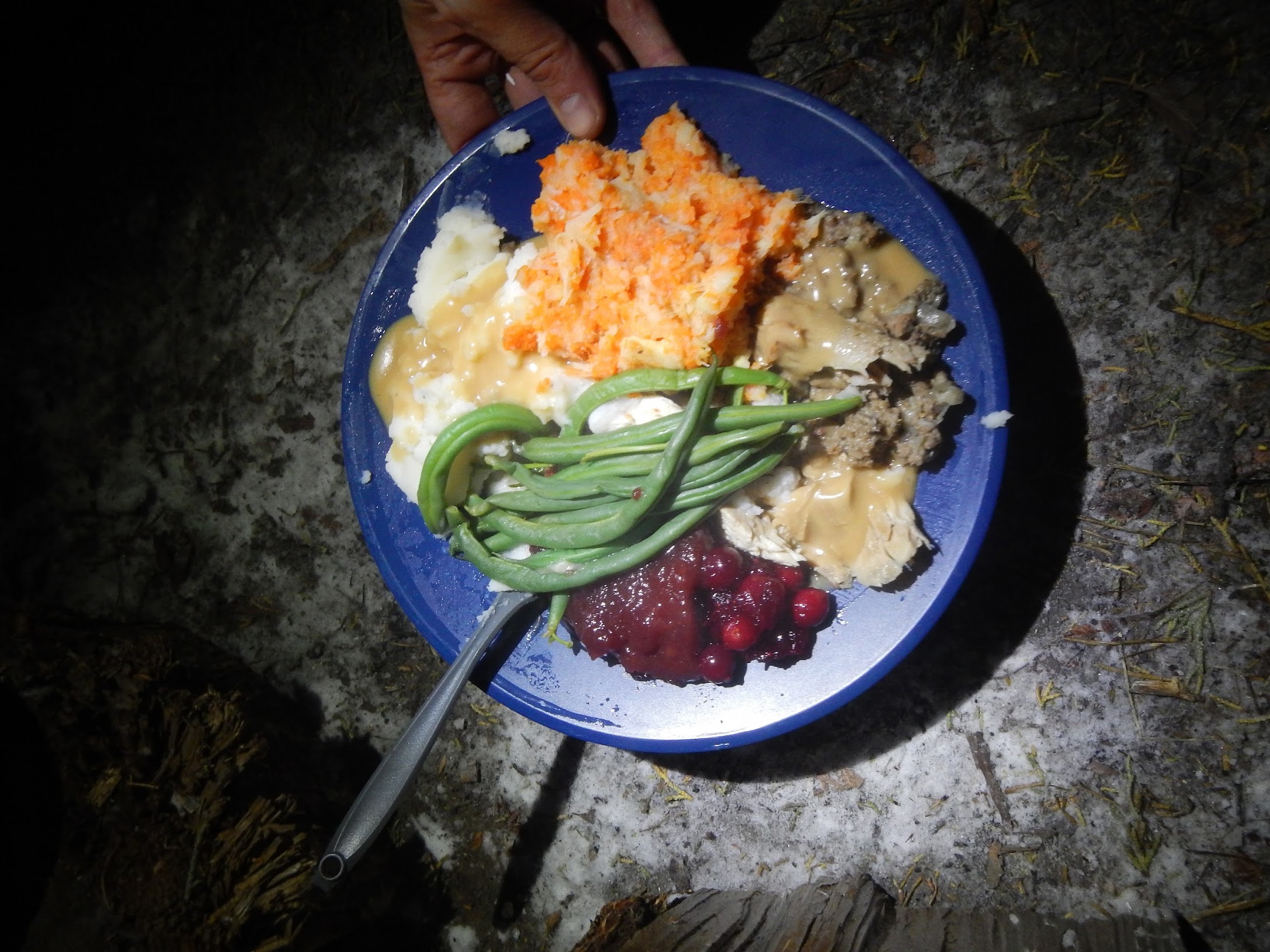 I’d like to say we savored each bite, but it was so damn cold outside we wolfed it down and ran over to the hot springs. We even left most of the dishes for the morning.

The hot springs was magical. We sat and soaked, watching the nearly full moon rise over the stone walls of our little enclosure. The water temperature was perfect. The worst part was getting back out. Emerging from a hot pool, water dripping down your skin, entering the -20 degree air was an experience I hope never to repeat again. We toweled off and jogged back to our campsite, where we dove into the tent and settled in for a cold night. 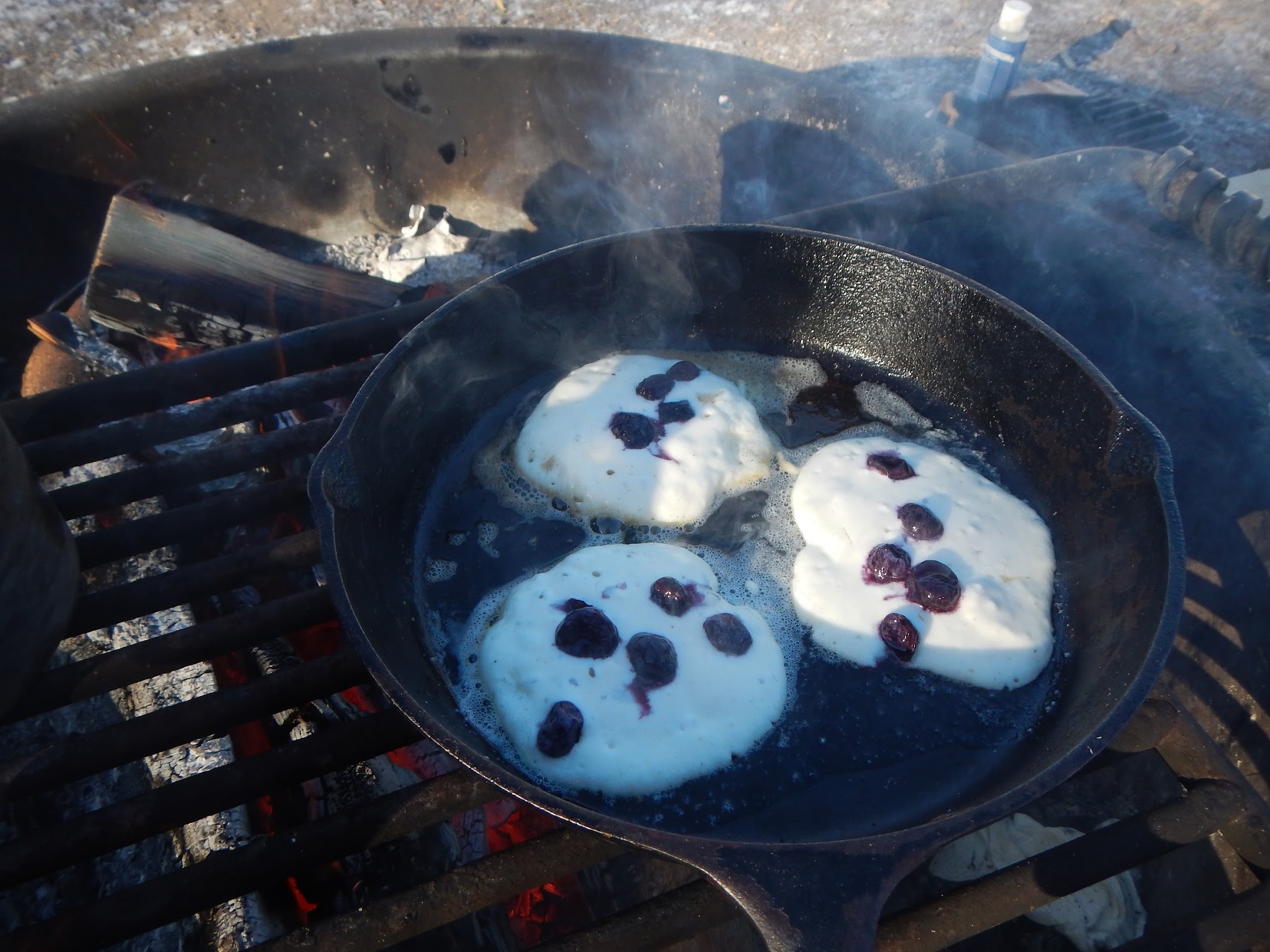 We slept in, waiting for rays of sun to reach our camp. While making breakfast I encountered some fun new barriers: all of our food was frozen solid. Eggs crystallized as they came out of the shell (if they hadn’t frozen through already). I had a tough time keeping my pancake batter fluid. These were serious problems that I was kind of glad to have. I enjoy the challenges of making camp life tolerable in below freezing temps.

We got off to a late start for our big hike. At 10:30, we finally stepped out of camp ready for an adventure. The last time I’d hiked Warner Peak was on a hot and mosquito-infested day in July several years ago. The challenges then were much different than the difficulties we faced today. 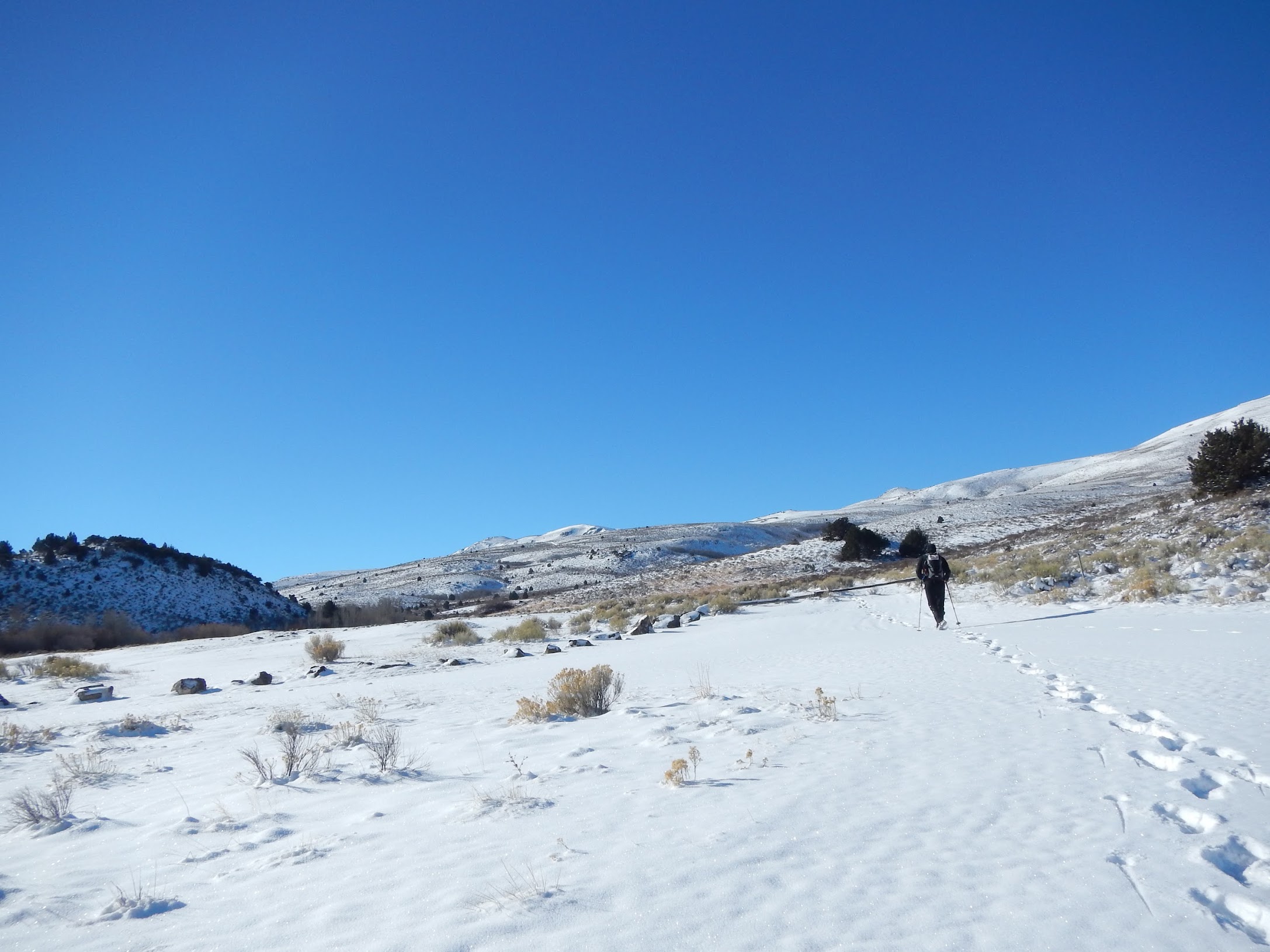 Instead of following the bushwhack suggested in the Sullivan guide, we walked up Barnhardi road two miles to Barnhardi basin. From there we followed a path to the cabin and had a snack. The air was cold, but the bright sun warmed our skin and contributed to a pretty comfortable hiking temperature. The snow on the ground was light and fluffy, but it was already starting to make walking a bit difficult, especially where it formed deep drifts. 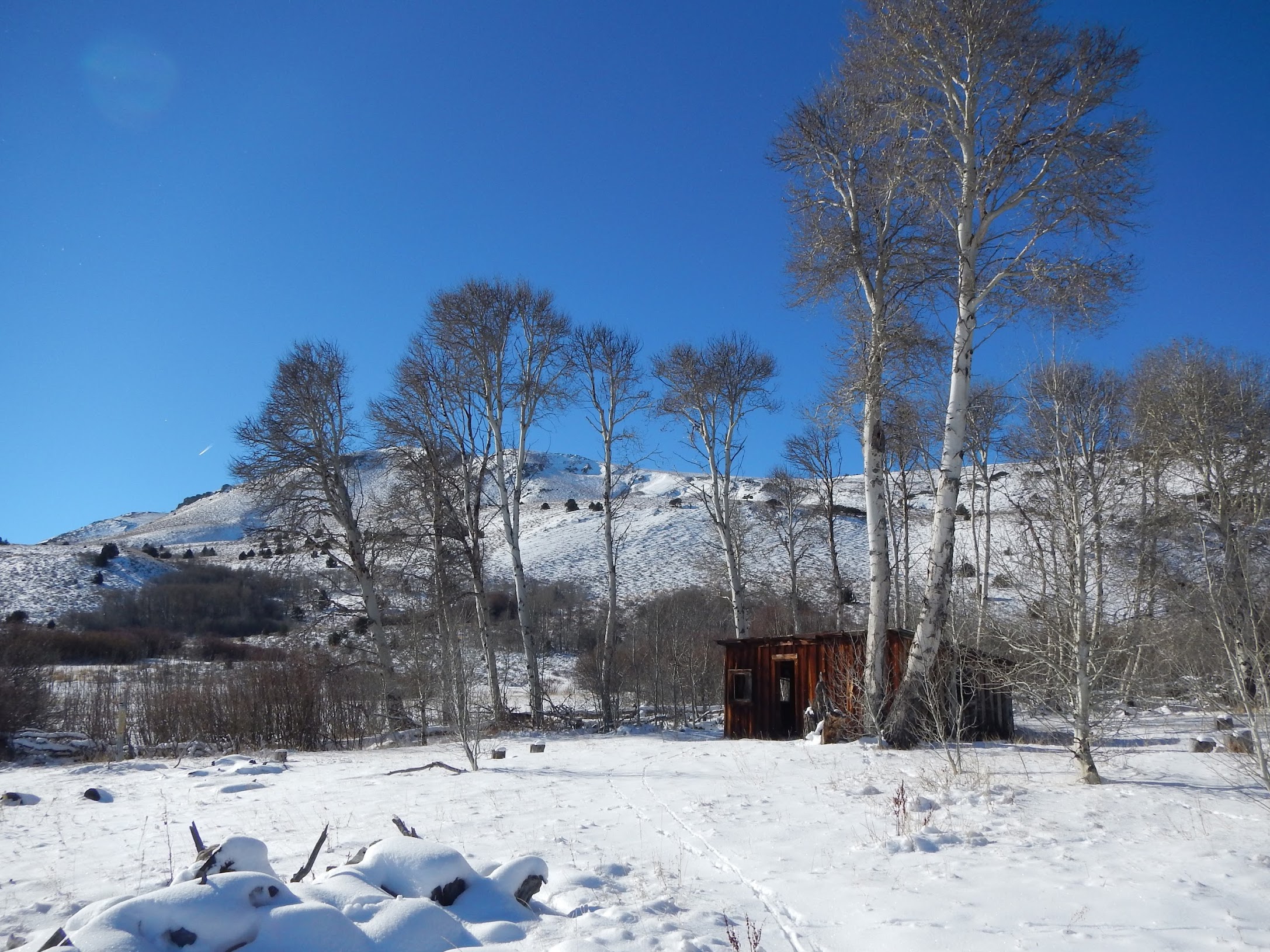 From the cabin we made our way up a thickly vegetated gully towards the ridge. This was slow going. It was walking uphill, through the snow, with loads of roots, branches and other traps buried out of sight. Eventually we crossed the stream and wandered up the other side of the gully, ridge in our view. On paper, the mileage looked really short and do-able. On the ground, however, it felt as if we were moving at a snail’s pace. The late start made us feel even more like slackers. The sun had already crested and we had miles of uphill travel to go. At one point, Aaron asked me to set a turn-around time. I had summit fever, so I estimated a time that would get us back to the road before dark. “3 pm,” I said, ” and that’s conservative.” The last part was to make sure that Aaron would agree and not spend too much time overthinking the math. 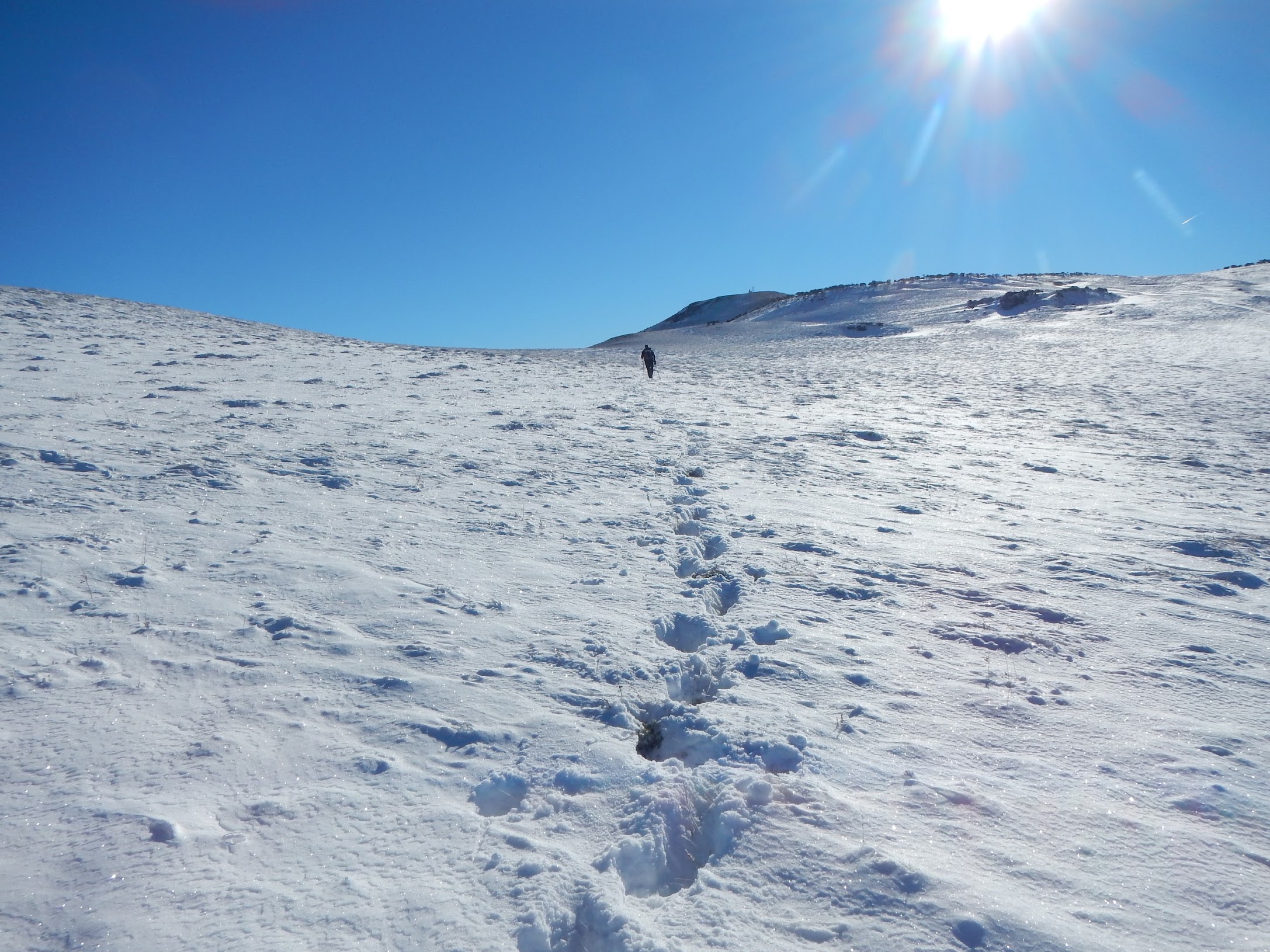 As we trudged along the ridge, each little up and down was like torture. A slight breeze began to blow, ominously foreboding a very cold night ahead. We reached the last false summit and caught a glimpse of our prize: a concrete building with some sort of antennae on top, like Mt. Defiance or Marys Peak. Aaron put his foot down here, convinced it was still too far. I glanced at the time: 2:15. “We’ll be there in 30 minutes at the latest. We can do this.”

As is often the case, that last hill looked way bigger than it actually was and we were on top in less than 15 minutes. We ducked behind the concrete building to get out of the wind, bundled up and got the heck out of there. Now, it was a race against the sun. 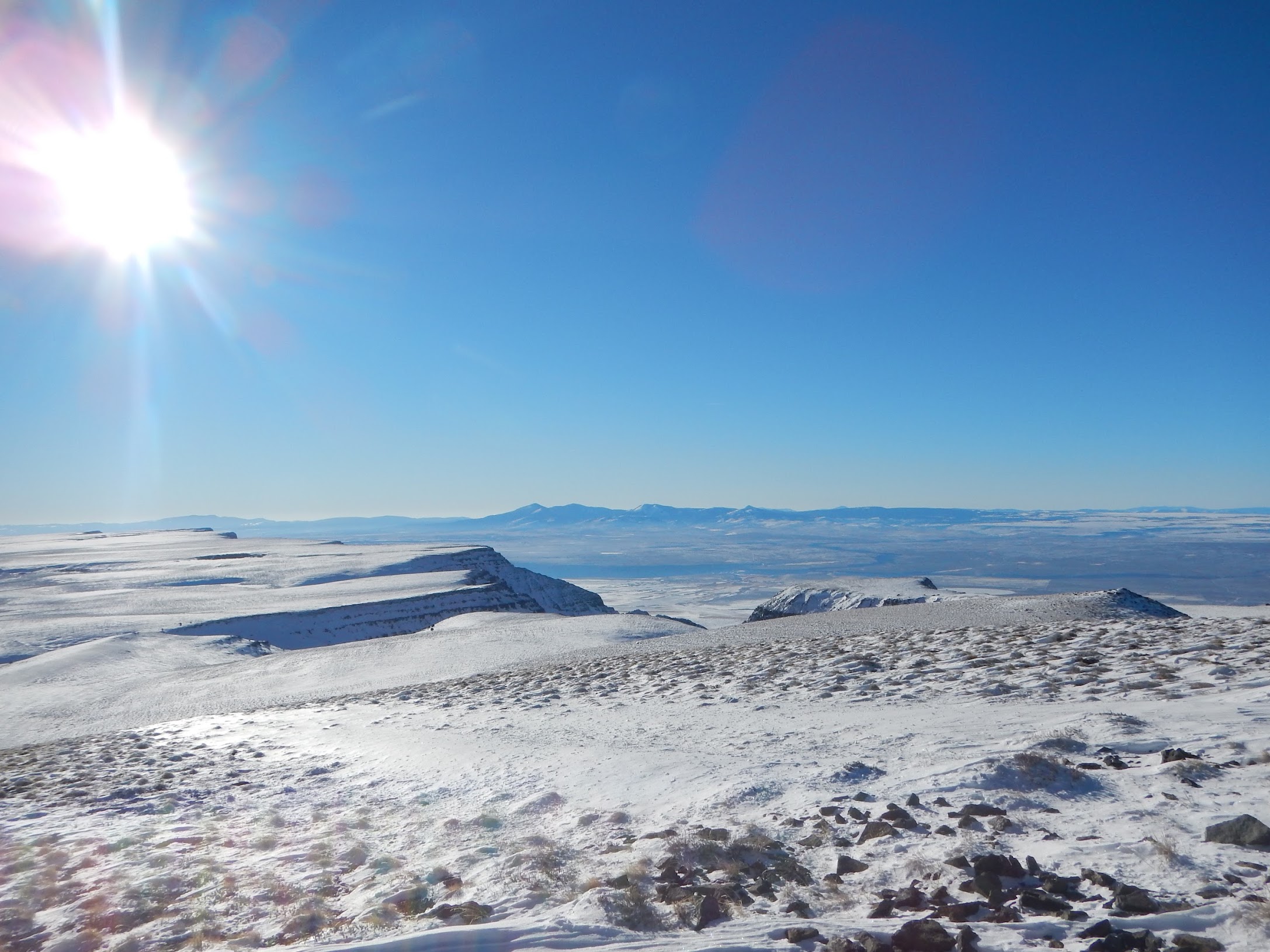 Much of the hike back was in the shade, and it was savagely cold. The hand warmers I’d opened up at breakfast time were beginning to lose their heat. We trucked downhill as fast as we could. It took a little over an hour to hike the 3 miles back to the cabin and another hour or so to get back to camp. It’s amazing how much ground you can cover when you’re going downhill and scrambling to generate heat.

By far, the highlight of the day was the incredible sunset we saw as we walked down the snowy road to camp. I stopped dead in my tracks to look up and take it all in. The pictures don’t even come close to capturing the beauty of that sunset. It was a fleeting, top ten moment, that made the late start totally worthwhile.

In the morning I came up with the best camp breakfast ever: cast-iron scrambled eggs and meat stuffing over a hot campfire. After breakfast, we were fired up to break camp and start making our way back towards civilization. As we were packing up, we both took off our down jackets and looked at each other as if to say “ugh, it’s really warming up out here!” The temperature: 18 degrees. How quickly one adapts to life below freezing.

We drove out to the visitor’s center to use the heated bathroom. A curious coyote came out to say hello, and then we went on our way. Partway down the road, we stopped to hike a 0.5 mile interpretive trail on the edge of the rim. The sunshine was brilliant and the air was so still. It’s amazing that such quiet places still exist in the world. 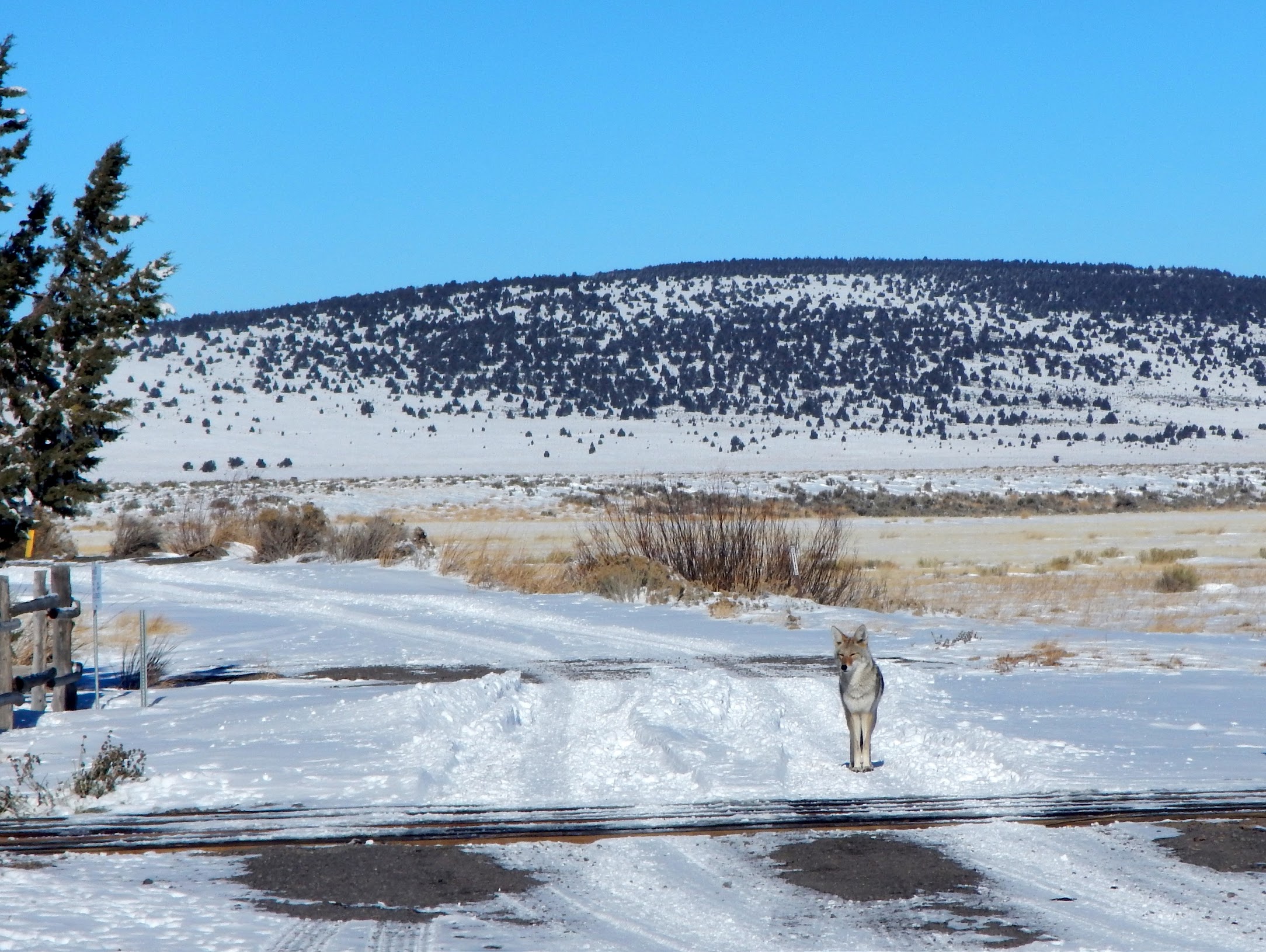 Further down the road we pulled off to hike DeGarmo Canyon, which was listed in a hiking brochure we picked up at the refuge. The road was unmarked and split into a few other roads, leading to some confusion and false starts. We eventually hiked to the mouth of what we thought was the right canyon. But there were no signs of a trail. We were thwarted by snow-covered slabs and thick trees choking off any reasonable path up the canyon, so we turned right back around. But our time wasn’t wasted; we watched a massive golden eagle fly gracefully along the dramatic rock formations in front of us. We again marveled at the open space and quiet, then jogged back to the car. Did I mention it was cold? 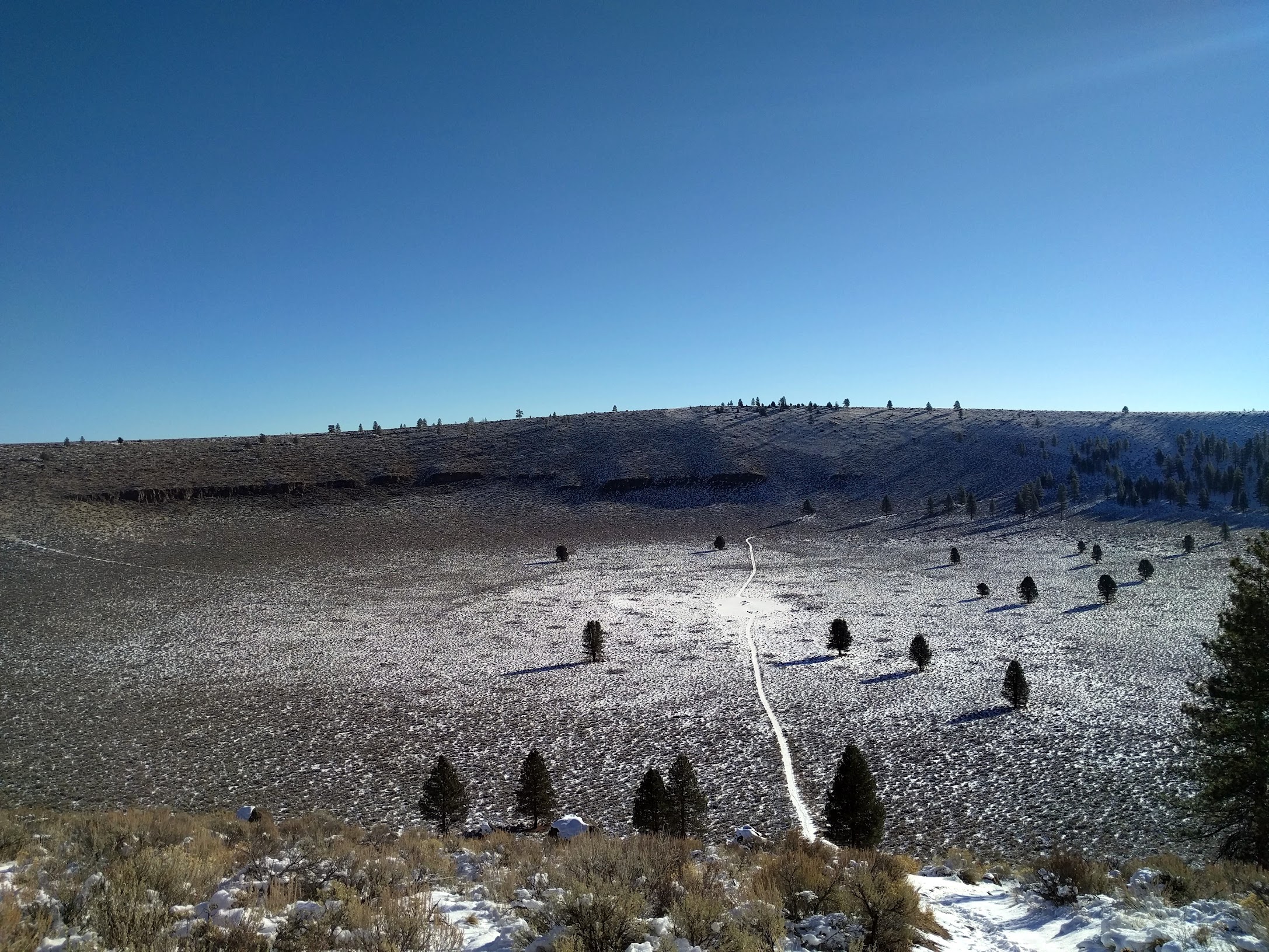 After a wholly disappointing stay at the Summer Lake Hot Springs, we started the long trek home. On the way, we stopped to stretch the legs at Hole-in-the-Ground, a volcanic crater somewhat near Fort Rock. Aaron read his book in the car while I bounded down the steep, snow-covered trail to the bottom of the big hole. I followed a couple of sets of human tracks, and then deer tracks, and then no tracks to the large, flat basin in the center of the hole. The sun illuminated the landscape, making the snow sparkle. It was a worthy stop, much unlike the less dramatic Big Hole (skip it).

And alas, our weekend of adventures came to a close. The one thing I really wanted was solitude, and we found it. As cities continue to grow and spill into our natural spaces it gets harder and harder to get away. But for now, there are many special places left in Eastern Oregon that only the most determined traveler will make the effort to visit. Especially when temperatures drop into the minus double digits.