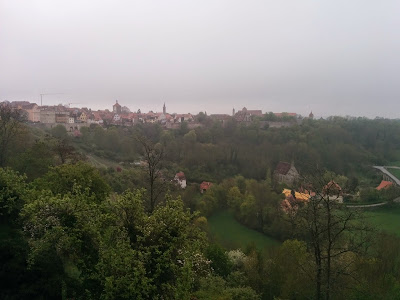 See the pictures from our trip to Bavaria here.

We took a train from the south of France up to Frankfurt, Germany, where we began the second half of our trip. In Frankfurt, we rented a car and set off to travel the Romantic Road through Bavaria.

I’ll skip over the stress of figuring out how to operate an unfamiliar vehicle in a new country with an operating manual and navigation system in German.

I’ll dive straight into the blissfully idyllic country drive through rolling hills, yellow fields, and puffy clouds. The Germany we pictured when we dreamed up this magical vacation.

Since we arrived in Germany in the evening, we bolted straight for Rothenburg ob der Tauber, where we had a place to stay for the night. We pulled in around 7 pm, driving down narrow but uncongested streets, as the city had quieted down for the evening. I admire the Rick Steves guides for the small, practical tips they offer; one of these tips was to spend the night in Rothenburg, since most of the visitors are day-trippers. He was spot on with that tidbit. We had a lovely meal at a nearly empty restaurant, I downed my first glass of German beer, and we took a peaceful stroll down darkened streets. We retired to a comfortable and spacious hotel room that felt like a four star suite after the crap hotels in France.

On the city walls of Rothenburg

All hotels in Germany include breakfast in the price, so we got up early and headed straight to breakfast. We were treated, unexpectedly, to a bountiful spread. This was no cheap, American continental breakfast. We had our choice of eggs, bacon, lunch meats, sliced cheeses, breads, rolls, jam, muesli, yogurt, fruit, coffee, and juice. We ate until our cheeks were stuffed like chipmunks, then rolled out the front door for a walk. 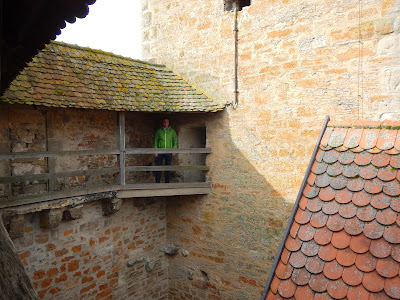 The town of Rothenburg is encircled by an old rock wall. It is still nearly intact; visitors can walk around the perimeter of the city almost entirely on this medieval barrier. We began our tour at an old church with colorful gardens and bubbling fountains. It was a gray and foggy morning, but we enjoyed some views of the valley and nearby countryside. It looked very much like a scene from Monty Python: Search for the Holy Grail.

Occasionally, we’d see a person or two standing on the wall, taking pictures with their iPads or some nonsense. This was rare; inevitably there was a staircase within twenty feet of the people. It seemed like we were the only ones actually exploring much of the wall.

That meant there were lots of opportunities to look at stuff, take pretty pictures, and have a little fun.

After making a lap around Rothenburg, we wandered into a little bakery to try a Schneeball. We’d seen them in the shop windows the night before, and figured they were made for tourists but they looked really damn tasty. They were. Fried dough and sugar is always a winning combination. Plus, they had a funny name. Win-win. 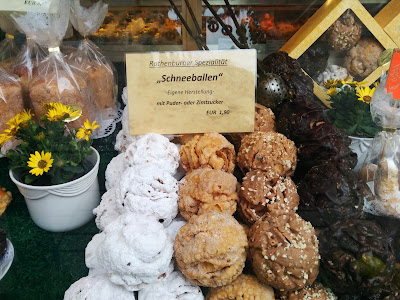 The city was starting to buzz with people and I felt a little anxiety bubbling up. We made one last stop in St. Jacob’s church before leaving. The interior of the church was very different from those we’d seen in France. The walls were cement gray, plain and smooth. There were some elaborate stained glass panels, but most of the windows contained clear glass and were framed by straight bars and metal circles. The plain walls served as an excellent backdrop to feature the intricate wood carvings, huge pipe organ, and perfect, symmetrical border details. It had a different style of beauty, but it still looked a little unfinished.

Around lunch time, we bailed out of Rothenburg. I’ll skip how insane the traffic was as we tried to get out of the walled city, which is not well designed for hordes of cars.

Instead, the story continues on the peaceful country drive. Aaron was behind the wheel and I frantically flipped through our guidebooks to try and pick another stop. There were too many quaint, historical towns for us to see in only a day and a half. I decided on Nördlingen, a walled city inside a crater. It sounded pretty awesome. Clearly, many other people had the same idea, and the place was jam-packed. We found a spot in a two-hour parking zone, so we had to prioritize our visit. We walked to the center of town and climbed the 90 meter tower at St. Georg’s church. It was 2.5 euro for the privilege of walking up the tower. The ascent up the old spiral staircase was dizzying, and the view was excellent. But it was bumper-to-bumper people traffic at the top, so we had to wait for someone to leave before we could get out on the deck. 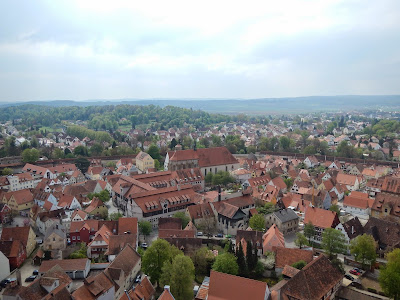 There were so many more towns to see, but we had to get to Schwangau that evening. We skipped back to the freeway and I pored through the books to choose one last stop. I decided on the Wieskirche, a rococo-style church that had ridiculously high reviews. It was all alone, outside a small village with apparently no other attractions. And, there was no entrance fee. 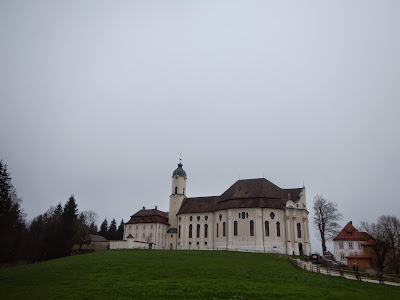 Upon arriving, it was clear we were at the right place. Not because the church was all that stunning, but because there was a pay-parking lot and there were vendors selling trinkets everywhere. A truck drove past us and rolled down the window. A German lady inside handed us her parking ticket, which was still good for an hour, and motioned for us to use it. We mumbled a danke schoen and watched her drive off. It was an omen!

The outside of the church was unremarkable. It was a big, white, plaster structure with a bell tower and some moderately interesting external architecture.

But once we got inside, the entire character changed. Every surface of every part was exquisitely decorated with gold leaf, vibrant paint, and three dimensional structure. Only a few plain, white strips of wall remained to draw attention to the painted details. The ceiling was most impressive of all, with finely detailed paintings of the “scourged savior,” showing scenes of Christ’s suffering and redemption. Religious or not, one could hardly ignore the craftsmanship and beauty of the church’s interior. 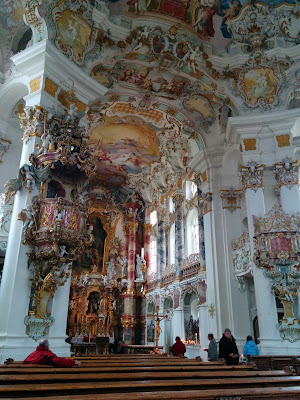 We finished the drive to Schwangau, a little mountain town near the Austrian border. The majestic Alps dominated the view from the deck of our perfectly perched hotel room. It seemed mellow at the hotel and the town felt empty, but as soon as we tried to go out for dinner we were shut down left and right. We ended up at the bar in a tiny Italian restaurant, which was not exactly what we were looking for. After dinner, we explored a little city park near the hotel, where we could see two castles in the mountains: Neuschwanstein and Hohenschwangau, our destinations for tomorrow.

Can you see them in the image below? 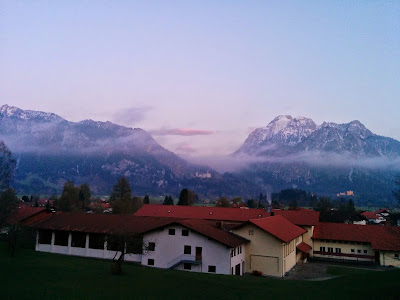