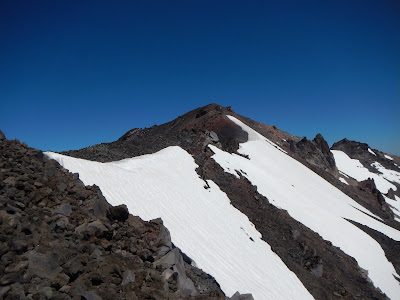 I’ve been busy with building my business this summer. So busy, I’d hardly gotten much opportunity to spend time in the mountains. So today, I convinced Aaron to climb Diamond Peak with me. I’d been up Diamond a couple of years ago in September, so I was hoping we’d have some snow to climb this early in the summer.

We began at a roadside pullout near the nondescript trailhead for the Rockpile trail on gravel road 2149. The first several miles of trail are gently graded through dry, open forest. The mosquitoes were aggressive right from the get-go. There was little time for stopping as we rushed along to escape their advances. 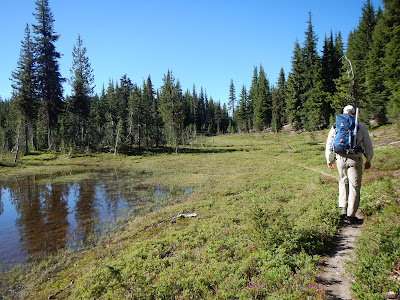 We blasted through the turns to get to the PCT and eagerly awaited the start of the climbers trail. At least, we thought, the breeze would keep the bugs down a little bit. The PCT dragged on for what felt like forever, then we reached the hairpin turn where we’d leave the trail. I remembered that there was a cairn marking this spot the last time I was here, so I trotted up ahead to look for it, then saw this: 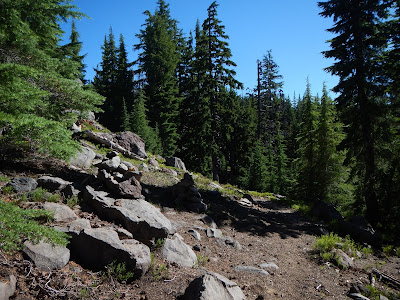 Anyways, the two obvious cairns on either side of the well-worn climbers path made it pretty easy to find. From here, we began trekking straight uphill. It was in stark contrast to the mellow forest walk we’d just completed. It was go time.

Up and up we went, following the obvious tread and small piles of rock. At first, the path was condensed and straightforward. But once we got out into the open, there were cairns and paths everywhere. We trended roughly up and right, where I knew the ridge would lead us to the summit. In hindsight, we should have paid a little more attention to our ascent route. 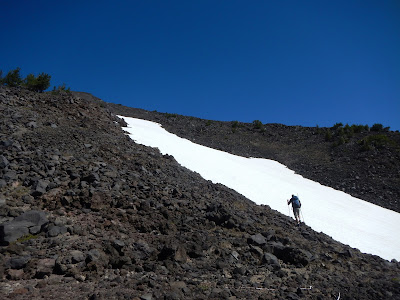 We scrambled up loose rocks and sand, trying to find the rocks that were lodged more tightly into the mountain. Eventually, we angled towards a snow slope and headed straight up that. The angle was moderate and the texture was perfect for barebooting it, so our crampons stayed safely stowed away in our packs. It felt so nice to be walking up a predictable surface. After the snow ended, we crossed more rocks and headed right to another, longer snowfield. This again, ended too soon and put us back onto the rocks.

From here we began to get views of the broad crater that makes up the southeastern part of the mountain. Large snowfields filled patches of the crater. Rocky spires jutted up from the long and sinuous summit ridge. We spied a skier and some dogs making their way up the snowy bowl. At the edge of the bowl, we enjoyed the lovely breeze and had a snack before tackling the rest of the rock-hop to the ridge.

Atop the false summit, we got an excellent view of our destination just a half mile ahead of us. The lingering snow reached up from the bowl and paralleled the rock on the eastern side of the ridge. We mostly stuck to the sandy, path on top of the rocks. Occasionally we stepped across on to the snow and crossed the narrow, flat area that was slowly melting away from the rock. We stopped to investigate some interesting caves and sculptures made by the snow. 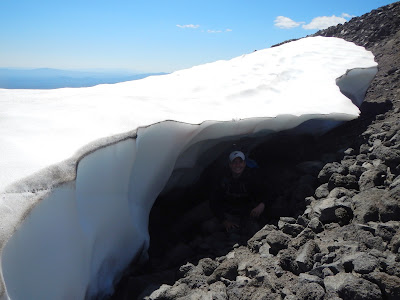 After many ups and downs, we scrambled up the final scree slope to the small but flat summit. It felt so nice to drop off my pack and sit down for a more substantial meal. It was exactly noon, so lunch was on the table.

I dug into a chicken burrito and lukewarm tea while Aaron wandered around taking photos. We hadn’t seen anyone all day, except for the skier far below us. I always enjoy savoring a summit without crowds. I thought about other, more popular peaks like South Sister, which probably had 50 people on the summit at this very moment, and wondered why more novice climbers don’t tackle Diamond Peak. It’s easier, has the same amazing views, and you don’t even have to pay to park at the trailhead. 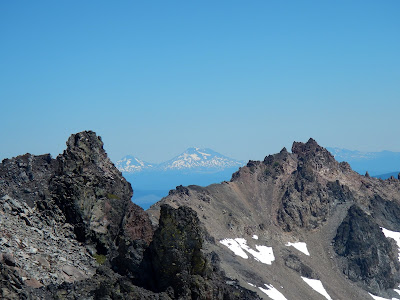 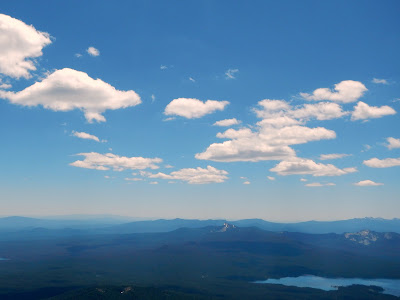 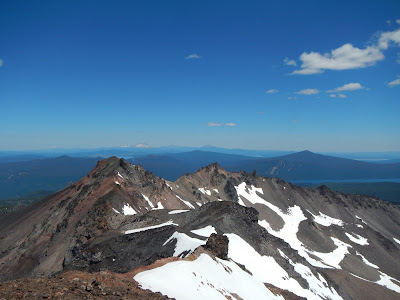 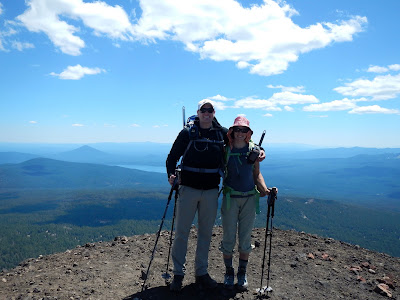 Summit solitude came to an end abruptly as I felt fur and breath come across my quietly napping face. I jumped up to find two fluffy dogs all over me. Since I’m allergic to dogs and generally don’t like them anyways, this was an unfortunate wake-up. The dogs were followed up by the skier we’d seen in the bowl. A few more skiers were ascending up the west ridge. It was time to go.

We retreated back along the ridge, sticking mostly to the rock this time, passing two more hikers on their way up. Score one for the early risers 🙂

The trip back down the rock and scree was mostly good. We glissaded down the two snowfields we’d climbed on the way up, then set a course roughly down and right, hoping to come across some semblance of a use path.

We ended up going too far right, being lured in by shade trees, and realized we were off route. What had seemed so obvious on the way up was very unfamiliar on the way down. Aaron and I fanned out, investigating our hunches, and playing a few rounds of “Marco Polo” as we descended towards the PCT. Aaron began spying cairns to our left, so we wandered towards those until we came back upon the start of the climbers route. Back at the gate of the southern oracle, we stopped in the shade to prepare for the trek through the forest. I reapplied DEET and switched boots to Crocs, while Aaron pasted on the sunscreen and adjusted his footwear. 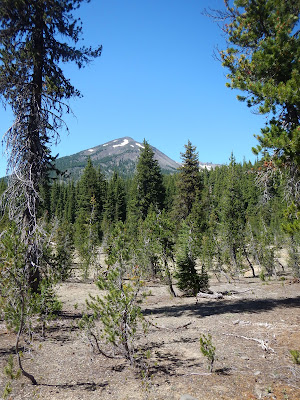 From here, we  got back on the trail and mindlessly put one foot in front of the other all the way back to the car. My feet were feeling cool, comfy and free. We saw no one else the remainder of the hike. It was a tremendously fun day.

The central Oregon peaks are looking pretty dry right now. My crampons have spent a lot of time in my pack this year. I got a great look north at South Sister, which looks beautiful from afar. In the meantime, I’ve got to plan more days to escape into the wild.

Check out the rest of the photos on Google Plus.