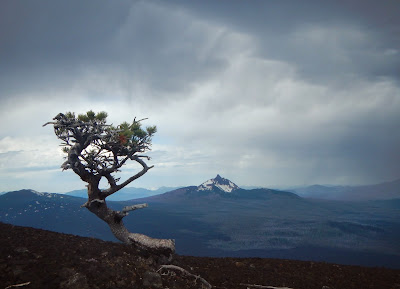 After seeing some early morning lightning and hearing ominous thunder from our dispersed campsite near Clear Lake, we decided to take a drive to McKenzie Pass to see what the weather had in store for  the day. From the expansive viewpoint at the Dee Wright Observatory, our fears were confirmed: the mountains were under attack by a number of dark storm systems that were laying down rain and hail in addition to the lightning strikes. Forest Service crews were standing by to keep an eye on brewing forest fires. We looked at each other and said, well, let’s go hiking. 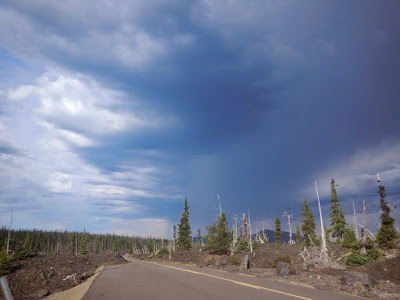 We decided to head to Black Crater because it was just a bit east of the worst of the storms. The trailhead was empty, so we parked and started walking uphill at a brisk pace. Most of the trail to Black Crater is buried in the forest. We trudged along, listening to the sky grumbling, wondering if we’d get stuck in the rain, or worse, in a fire.

Shortly after pondering this, rain began coming down on us. Aaron, of course, had his raincoat and pack cover on in a flash. I hadn’t packed a rain shell for this trip, but I did grab the footprint for my tent and stuffed it in my pack for just such a predicament. What followed was the assembly of a functional poncho for myself and my backpack. 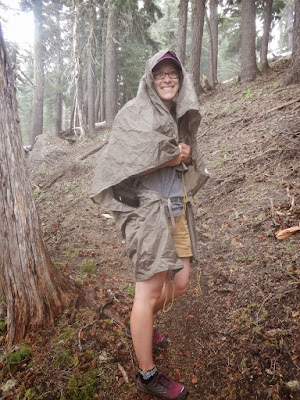 We moved ahead with confidence, pushing through the rain and hail no problem. The next obstacle, predictably, was snow.

It began as a few short snow patches, but as we reached treeline, we hit more persistent and deep snow. We managed along just fine, barreling straight up a steep snow slope when the trail’s switchbacks disappeared beneath it. While the distant skies were still gray and dramatic, the skies overhead began to show patches of blue and friendly, puffy clouds. We enjoyed the final stretch to the summit, traversing across beautiful rock gardens and passing by twisted whitebark pines. 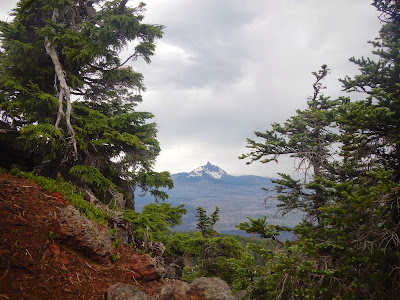 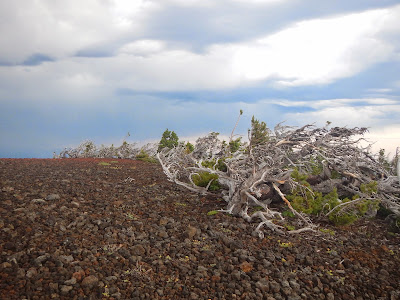 I had become fully engaged taking pictures of and admiring the tiny, bright, alpine flower beds. But when I lifted my head to look in the other direction, I shouted “holy crap! The Sisters are RIGHT THERE!” So close I felt I could throw a rock to North Sister.  But as we continued, the views got even better, clearer, and more spectacular. With all the exploring I’d done in Central Oregon, I was completely blown away that I’d overlooked this tremendous hike.

Just below the summit, a broad, cinder plateau offered a nice photographing opportunity. The clouds cooperated just long enough for me to capture a photosphere. 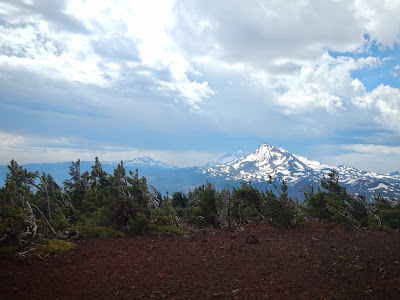 Then we hiked up a narrow catwalk to reach the summit proper, atop a small cliff. Here were the remains of the old fire tower lookout. It must have been a pretty amazing place to be. As we quickly downed our lunches, the gray clouds began to swallow up the Sisters. We knew more weather was heading our way, so we boogied out of there. 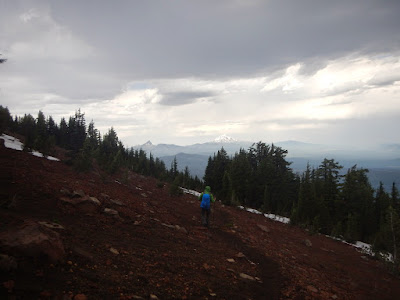 But the rain never came. In fact, the sun began to break through and we began seeing other hikers coming up the trail. Things had taken a turn for the better. Back at the parking lot, we ran into a family of hikers who said they were behind us but turned back due to the snow. With confident feet and a capable hiking partner, I thought, that snow was no big deal. I felt lucky that we were able to enjoy some solitude on one of Central Oregon’s most perfectly perched viewpoints.