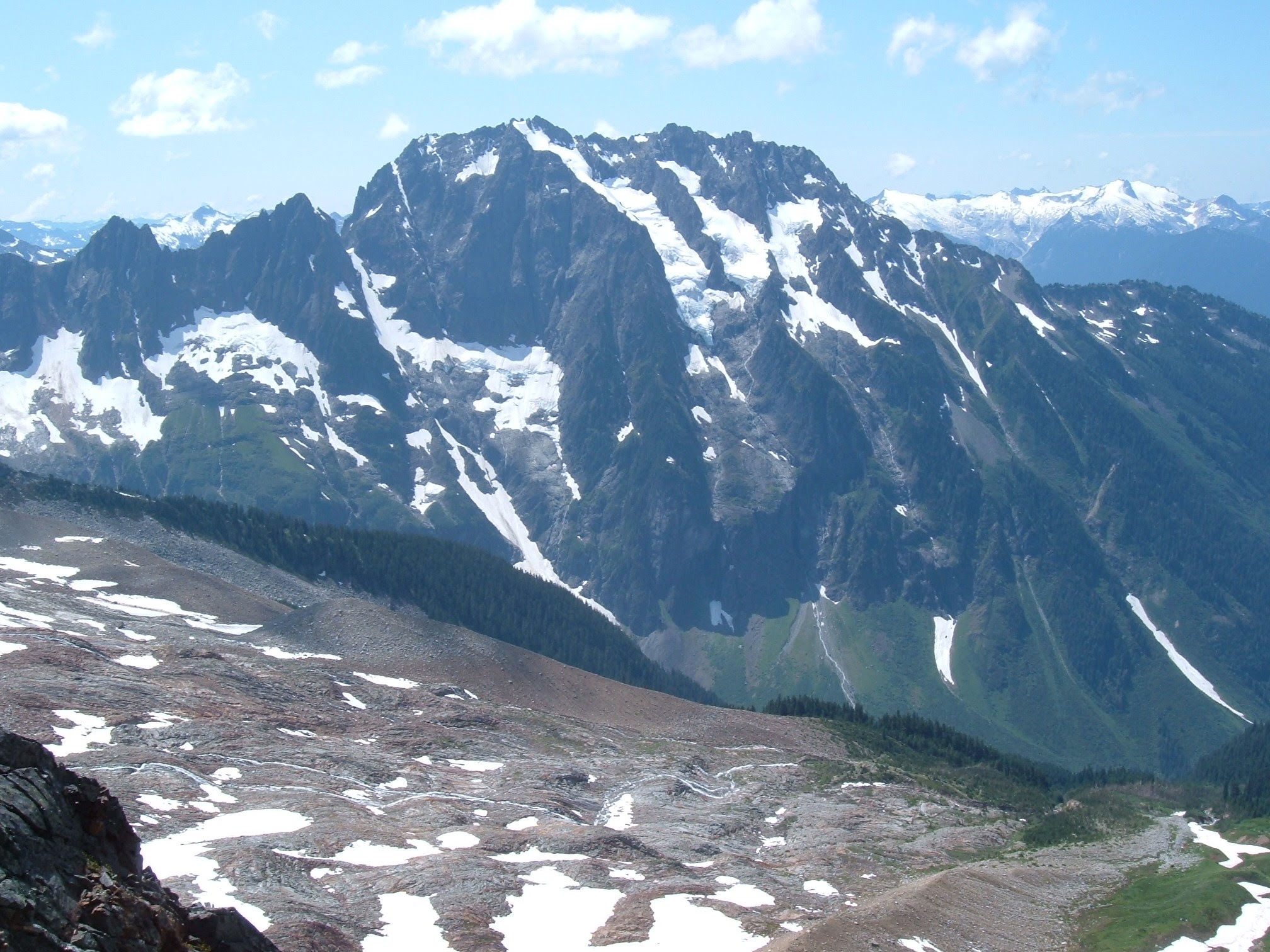 Our plan: to climb the East Ridge Direct route on Forbidden Peak in two days, then drive to Washington Pass and do some rock climbing on the stellar routes we keep hearing about out there. Things didn’t turn out quite as we’d planned… On Thursday afternoon we arrived at the unofficial trailhead to reach the Boston Basin. The climbers path that leads up to the Basin is very steep, rocky, and rooty. It reminded me of the Appalachian Trail in Maine, except it wasn’t flooded. Sweet. This would be a piece of cake.

Brad and I squeezed our way through thick vegetation, tread over logs stacked by an old avalanche, and splashed through four major stream crossings (only one of which was relatively difficult). Soon we found ourselves at low camp, just above treeline. The camp was packed with tents so we decided to ascend into the foggy abyss to the snow-covered high camp. We didn’t find the actual camp but made our way over to a somewhat flat snowfield where we decided to set up the camp. 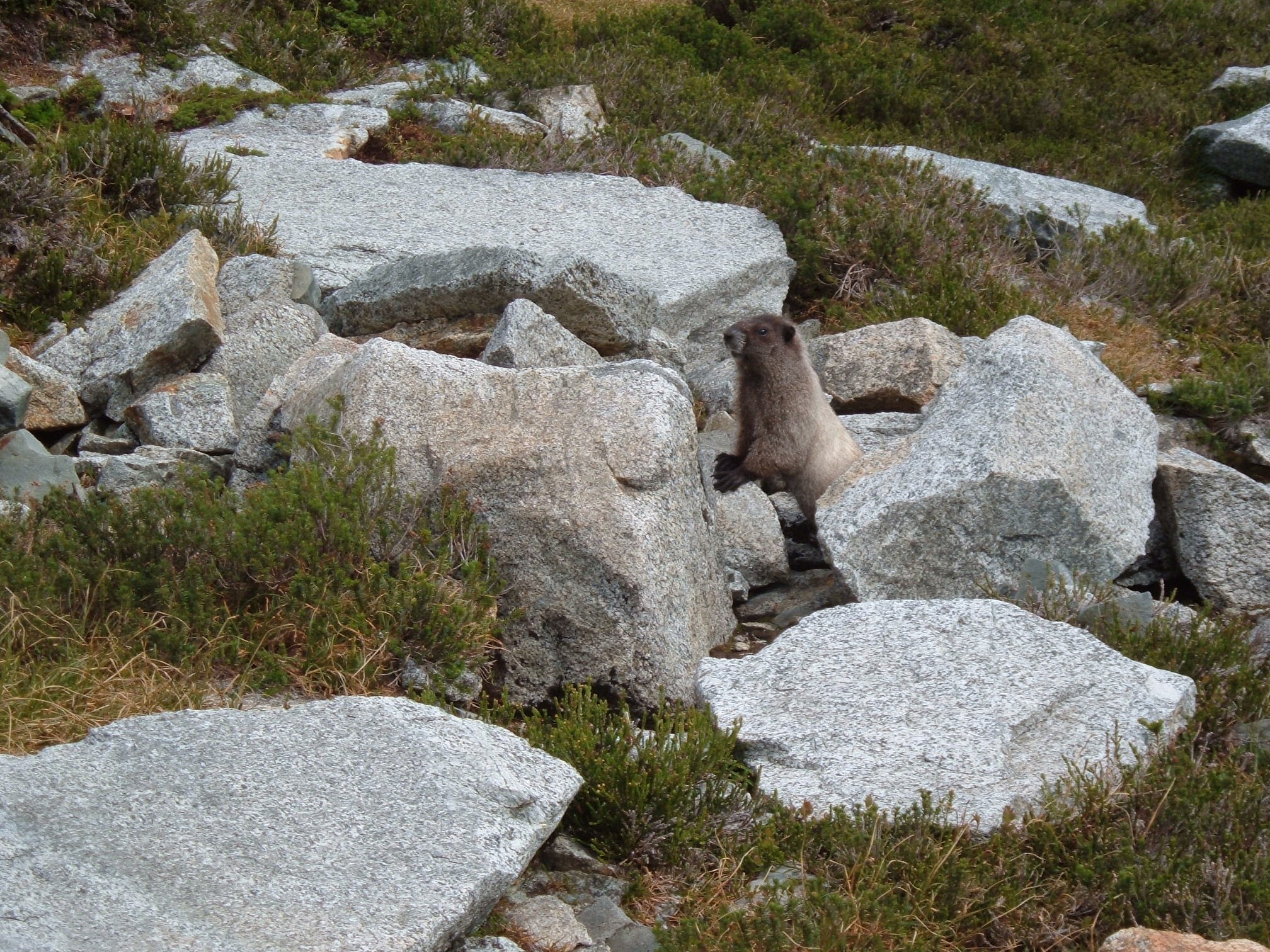 Along the way, we watched several marmots lounging on the rocks and scurrying through the grass. We had a monopoly on the beautiful views from our quiet camp. We cooked up dinner and went to sleep among mountainous giants. 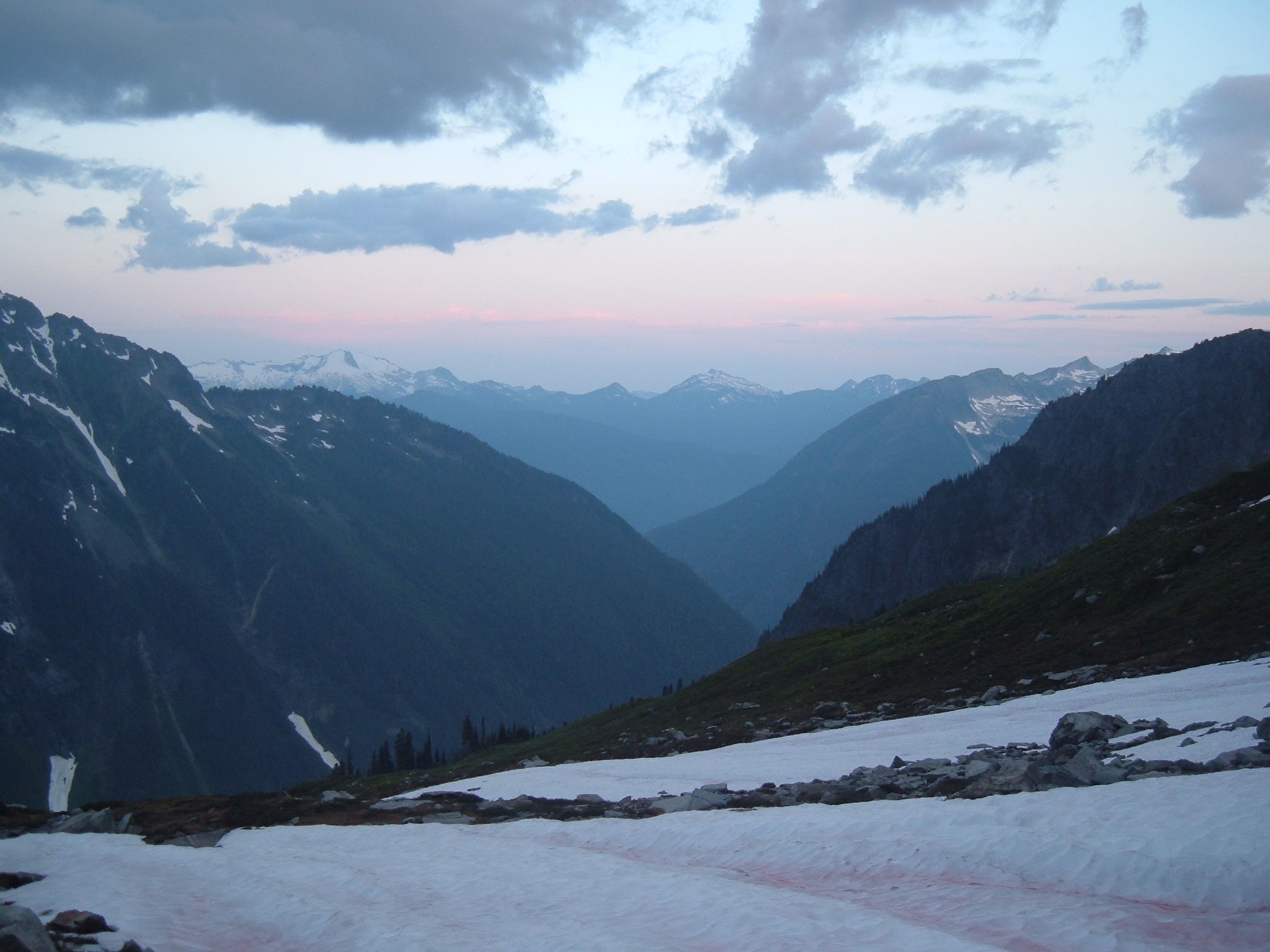 Early Friday morning, we peered out the tent window into a cloud. Weather moved fast around here. Every 2 minutes or so, the cloud pattern would change completely. The high ridges played peek-a-boo as ominous clouds rolled through. We decided to wait until we could see the route better. Then a thunderstorm rolled through. We napped.

At about 11 am we climbed out of the tent and took a look around. The summit was out of the question today, but at least we could scramble up the route to get a preview for tomorrow. With our packs loaded with rock and snow climbing gear, we headed up the talus to a snowfield at the base of the scramble to the East Ridge. 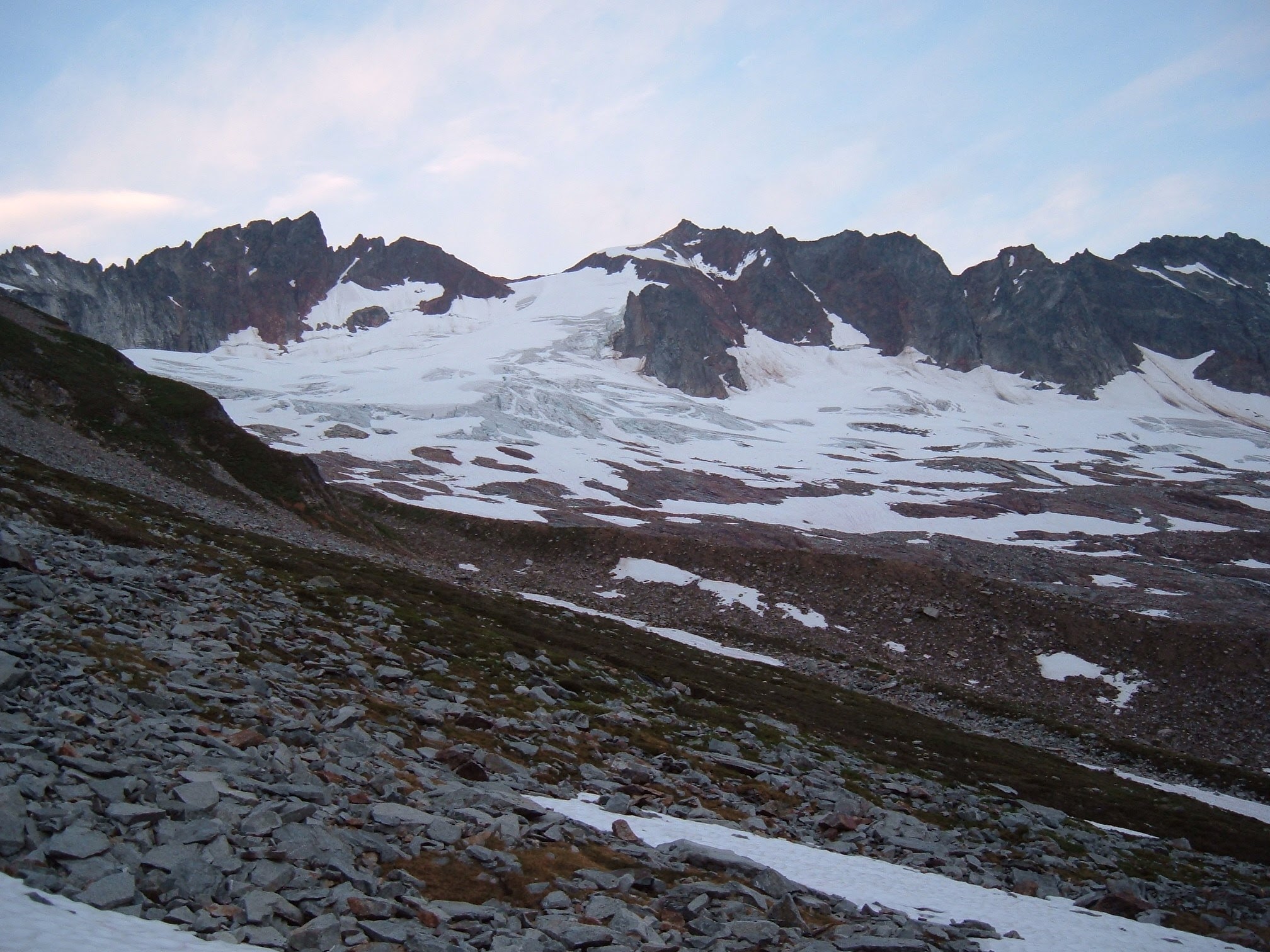 The snow was soft enough to walk up without crampons and soon we were on solid rock. We followed the easiest line up the broken slab, avoiding snowmelt runoff and crumbly choss. The rock here is quite different from the volcanic mess we are used to climbing in Oregon. As we ascended, the terrain changed from 3rd to fourth to (I’m sure) low fifth class. I got a bit unnerved at times climbing unroped. Eventually we stopped ascending, getting a flavor of the climb, and started the downclimb.

Back at the tent, we relaxed in the sun, swatting at biting flies and eating lunch. We’d only really planned to be up here for two days so we began rationing food as we anticipated a long day tomorrow. We returned to the tent to escape a brewing thunderstorm, only to emerge a couple of hours later to enjoy the cool evening, sunset, and a trip to the stream to filter water.

The alarm rang at 5 am. We had to get up and moving if we wanted a shot at the summit. Leaving axe and crampons behind, we took off across the rocks and snow to retrace our steps from the previous day. This time we made it all the way to the top of the ridge, following the same slabs and a somewhat loose gully near the top.

The ridge was composed of very stable talus and the occasional snowfield. There was nothing that resembled a “glacier” as described in the Beckey guide. I’m still not convinced we were on route. As we moved towards the summit, which we could now actually see, we heard the distant rumble of thunder and felt the occasional drop of rain. Dark gray clouds loomed in the distance. Based on our previous weather-watching in the basin and the current wind direction we knew the storm was headed straight for us. Brad scoured the ridge for a good place to hunker down.

We sat in a small, rocky corner and spread out a space blanket and emergency bivy over ourselves and our packs. For about 30-45 minutes we waited, snacked, and tried to keep our legs from falling asleep. Once the storm passed, we surveyed our position and considered a summit bid. 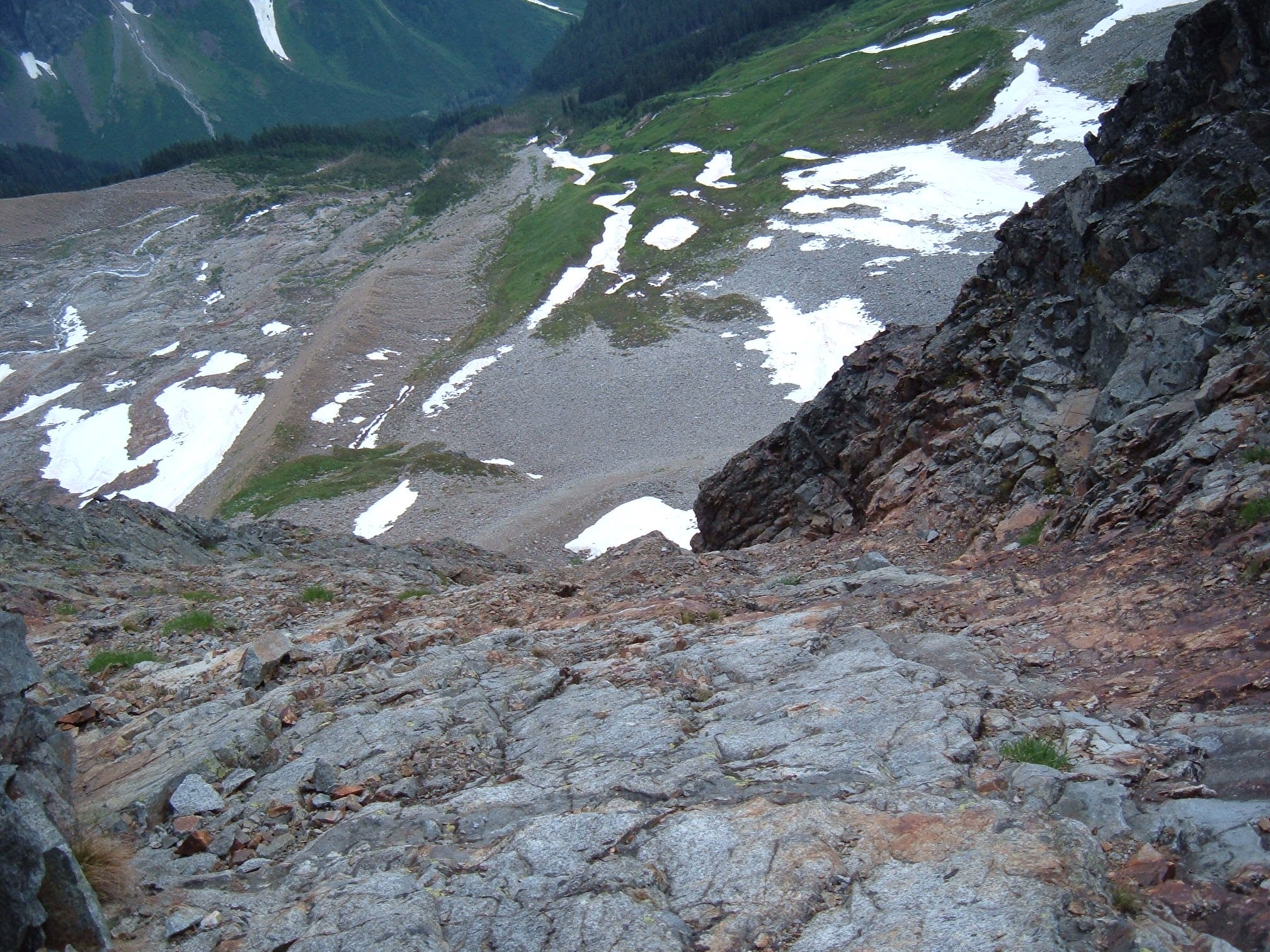 Several things made us decide to retreat. First, another big storm was moving in from the west. Second, I did not like the looks of the very exposed, unprotectable traverse to get to the col near the first big gendarme. Plus, now we were behind schedule and knew the climb would take at least 5 hours to the summit from here. And, the rock was slick from the rain that had just come through. Sadly, we turned our backs and walked back down the ridge. At the other end, a high point gave us a great view of Boston, Sahale, and some climbers on the Quien Sabe glacier. We hung out there a while before searching for the gully that would lead us back down to the basin. After some intense downclimbing, we hopped on to the soft snowfield for some standing glissades and a couple of unplanned butt glissades.

At camp, we were treated to more flies. We took everything out of the tent to dry in the hot sun as we catnapped on the rocks. In the mid-afternoon, we packed everything up and walked across the rock and meadows to the low camp, where we picked up the trail again. Another two hours or so and we’d be back to the car. Simple.

The familiar sounds of distant, rumbling thunder began to accompany the clouds we had been watching all afternoon. We moved as quickly as we could along the trail. Soon after we dipped into the woods, the rain started pouring down. It didn’t take long for both Brad and I to become completely soaked. 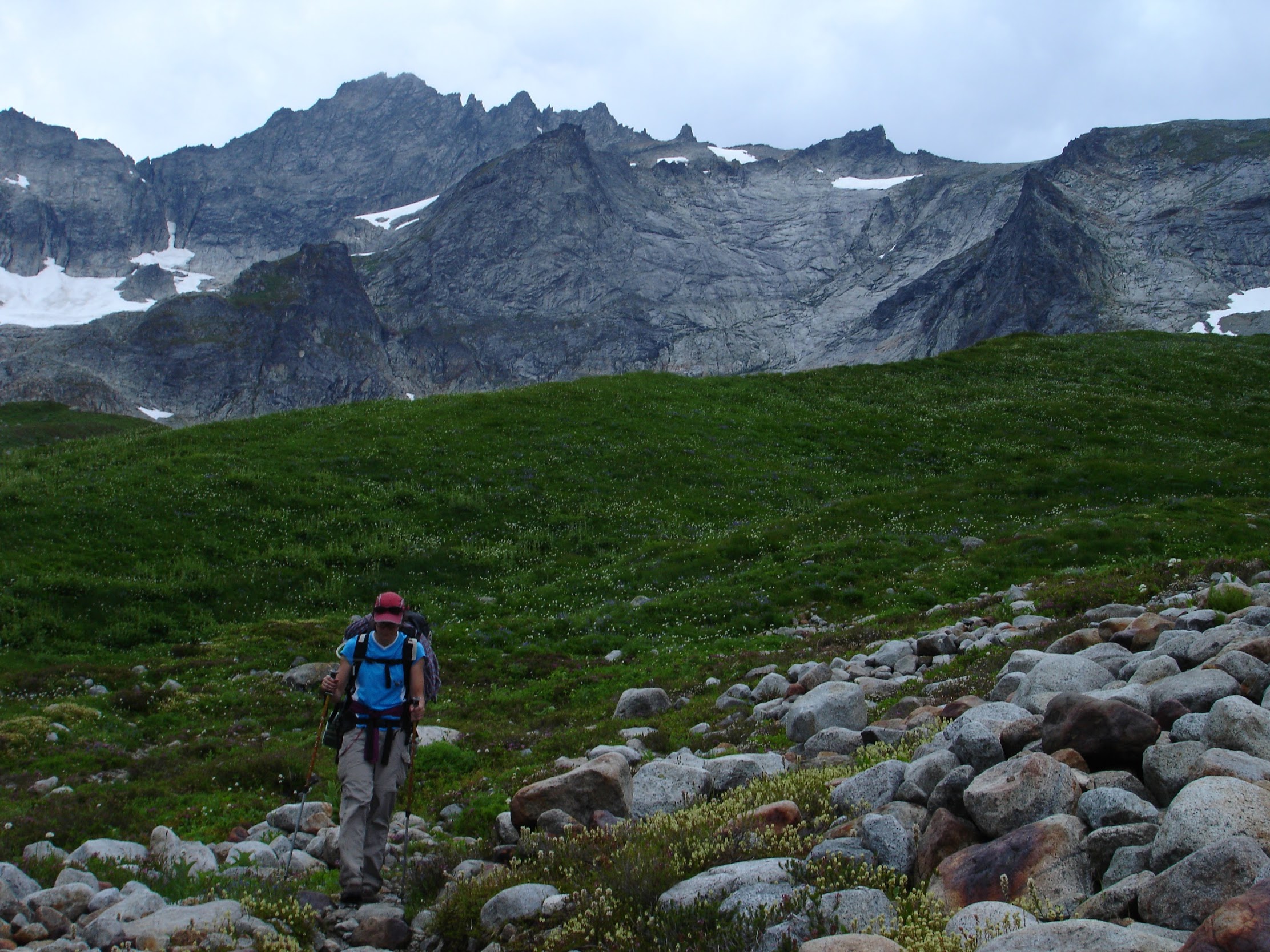 The weather forecast had called for hot, clear days for most of the weekend so I hadn’t bothered to pack any rain gear. Lovely. More flashbacks from Maine. We tenuously picked our way through the steep, muddy roots. A couple of stream crossings later, we reached the avalanche debris. Suddenly a very loud rumble, like continuous thunder or a jet engine, filled the air. Brad guessed it was the sound of a flash flood. Images then bombarded my head of a huge wall of water pouring down the slope above us.

As we crossed the debris field, we approached the next stream crossing, which confirmed Brad’s prediction. I could barely see the “stream,” but the brief glimpse of churning, brown water attacking the high shores of the riverbank, taking trees and boulders with it, was enough for me. Now I was terrified. I had never experienced a flooding event and I couldn’t tell what was safe and unsafe. Brad led us back through the debris to the trail on the other side. We promptly found a clearing that would be home for the night. We set up camp, changed into dry clothes, and hunkered down yet again to let the storm pass.

We would hear the thundering roar of water and boulders for several hours after hunkering down. I wondered if the stream would be passable in the morning. I dreamed of being evacuated from the woods. 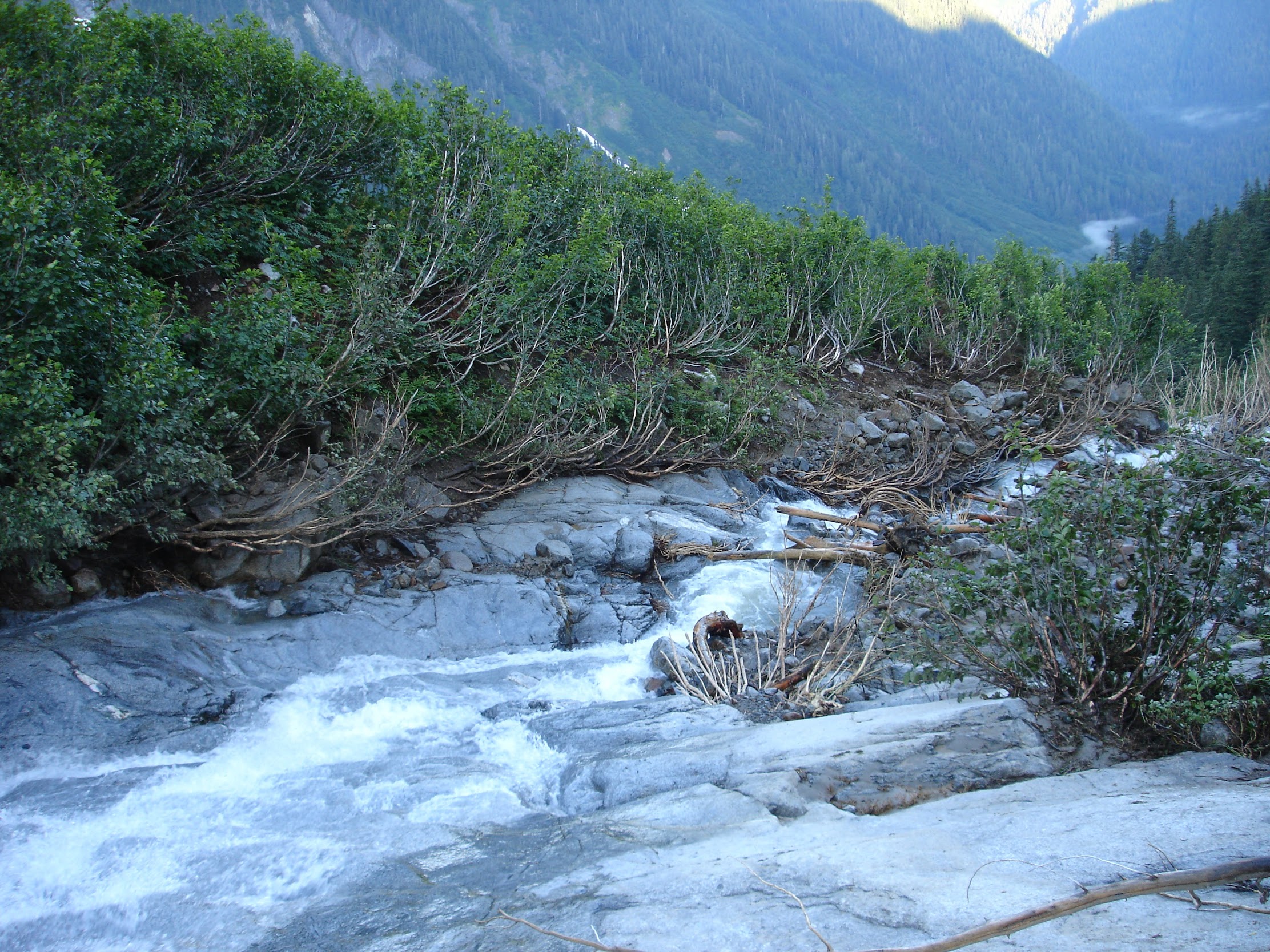 The next morning I changed back into cold, wet clothes after packing up the tent and we headed out. Crossing the debris again, woo hoo! It seemed easier today. The stream was back to normal levels and we proceeded across with no problem. Descending the trail, at times, was just as challenging as ascending it. The vegetation was very wet and dense, leaching onto our clothing with each step.

Once we reached the car, it felt wonderful to put dry clothes on and eat a large quantity of food. A climber relaxing in a van next to ours informed us about our last obstacle for this trip: the road ahead was covered by debris from the flash flood and would be closed for at least a couple of hours. Well, I guess there are worse places to be stuck! 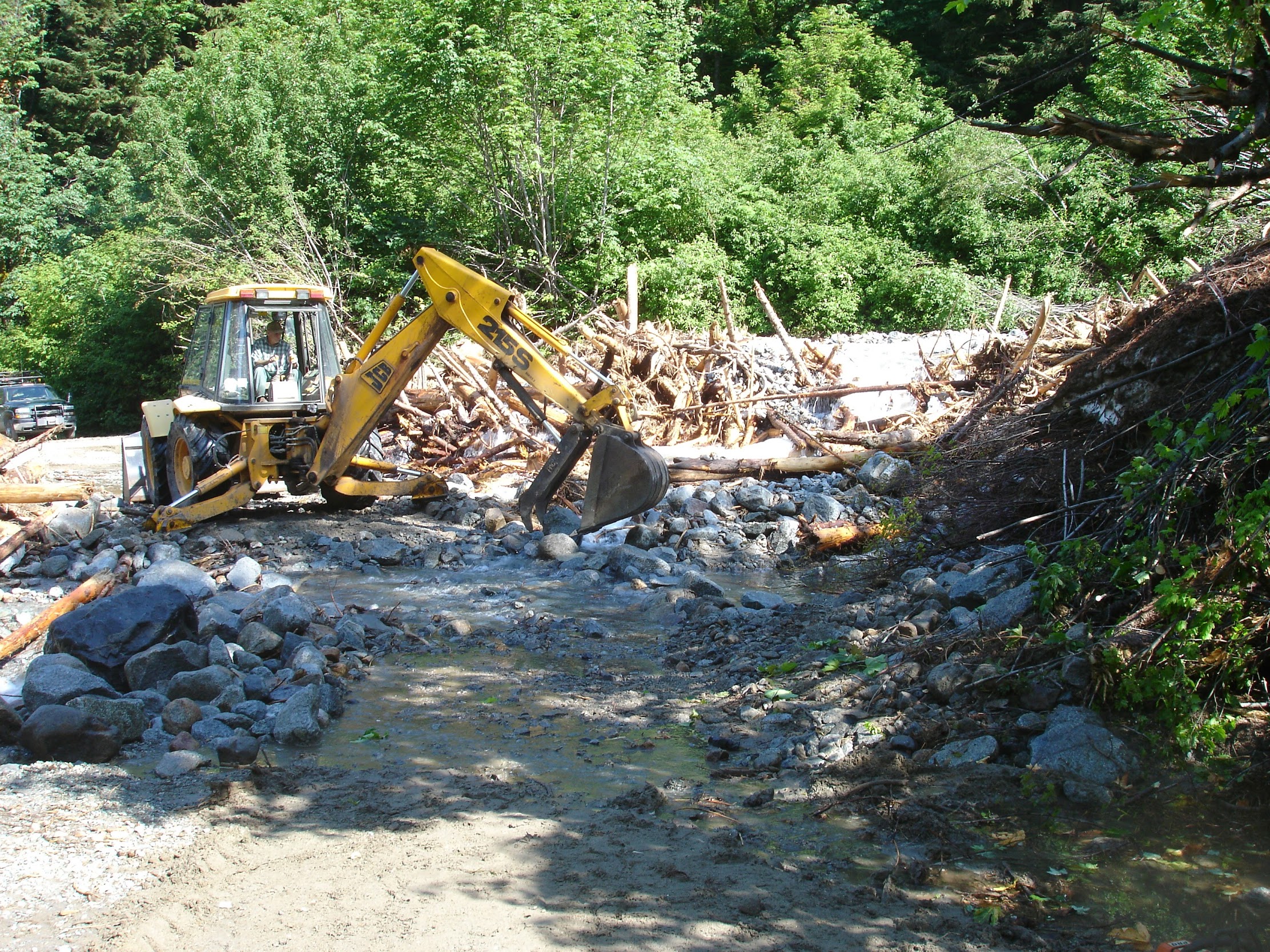 After eating a hearty serving of breakfast potatoes, Brad and I walked down the road to survey the damage. The stream was no longer diverted under the road, it was running over the top of it. Boulders and tree trunks blocked the culvert. Another section of road up a little further was also covered by debris and washed out. We watched the bulldozer/backhoe work at getting the road open. There were lots of people stranded, many of whom were dayhikers parked at Cascade Pass. At least we had a car full of food, a stove, and a change of clothes.

By 11:30 am the road was repaired enough to let people out. This would be the end of our journey in the North Cascades. Although we didn’t accomplish nearly as much as we set out to, we enjoyed spectacular scenery, worked together as a team, did lots of problem-solving, and got some great exercise. I’m keeping my fingers crossed for good conditions on next weekend’s Curtis-Gilbert climb.