Devil’s Lake Trailhead > summit and back 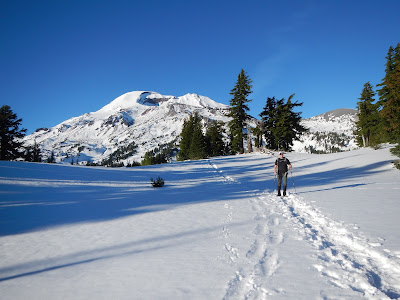 Photos are here. And, none of the photos were edited for color or contrast. It looked just that amazing.

It’s been a crazy fall. Last weekend, the Pacific Northwest was slammed with stormy weather that dropped inches of rain in the valleys and feet of snow in the Cascades. We had planned for months to climb South Sister last Sunday, but it was clear that was not going to happen. We pushed it off a week, and determined our best shot would be the following Saturday. The weather forecast predicted clear skies and temperatures in the 50’s and 60’s, even on the upper mountain. With our team whittled down from 9 people to 5, we excitedly prepared for a summit attempt on Oregon’s third highest mountain.

And then there was snow

We knew there would be snow, but we were unsure just how much of it we would find. The answer to that question came quickly. The team geared up and began hiking up the trail around 8 am. The sun was still low in the sky, and the air was crisp and cold. We warmed up quickly as we ascended through the woods. Soon, we began walking on thin patches of crusty snow. The team stopped to put on Yaktrax for some additional traction on the icy snow. 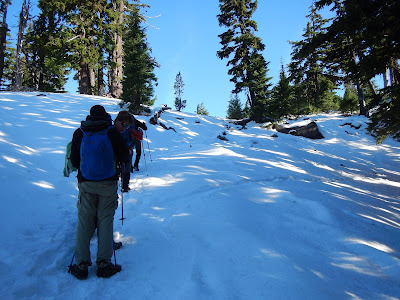 When we broke free of the trees, we were presented with a grand view of the task ahead. The snowy mountain rose from the white plateau, standing in sharp contrast to the deep blue sky. From here, footprints led in several different directions. We did our best to follow the most well-beaten path that led towards the mountain. The sun was overwhelming as we were totally exposed on the wide, open plains. We enjoyed breathtaking views of Mt. Bachelor and Broken Top, as well as the intriguing contours of the surrounding lava field.

Where are all the people?

Along the way, we encountered just a handful of other people attempting the climb today. Several would turn back, saving the trip for a less snowy day, or scheduling an earlier start. But, our team pushed on, taking enough rest breaks to rehydrate, refuel, and conserve energy. We still had much of the climb ahead. Along the way, we were treated to the most unbelievable views of Broken Top and Mt. Bachelor.

Once the trail began climbing up from the plateau, it didn’t stop until it reached the crater rim. We trudged ahead, slowly and methodically, up to the saddle at the base of the Lewis Glacier. The lake here was covered over with snow and ice. It was a great spot to rest and get mentally geared up for the final push to the top.

Now, it felt like we were climbing a mountain. From the saddle, we followed a snow and rock ridge along the steep cliffs carved by the Lewis Glacier. To the left, we looked over South Sister’s notorious scree-field, now covered over with a uniform blanket of snow. To the right, we peered down into deep crevasses in the ice. This doesn’t look like Marys Peak…

The most captivating part of this section of the climb was the endless variation of ice sculptures clinging to the rocks. The thick rime was melting in the heat of the sun, producing elegant, fluted patterns. It was easy to justify a rest stop to take a moment to enjoy the unique beauty that was right in front of us. It made all the physical exertion well worth it.

As we climbed higher, folks passing us on their way down told us that crampons were key for the icy sections above. That sounded like trouble. We ditched our only pair of crampons a half mile below and were left with Yaktrax or bare boots. I figured we’d play it by ear.

Fortunately, the teams that went before us had kicked steps in the snow (someone who had long legs). So, with the exception of just a few, short bits, the snow was grippy enough to permit climbing without crampons. We moved carefully and used our trekking poles to help with balance and traction. For three members of the team, this was a totally new experience, and they all did great!

Atop that steep slope, we crested the crater rim and saw the summit within our reach. A broad, snow-filled bowl lay between us and our destination. Instead of taking the easy walk across the crater, we decided to turn right and amble along the icy rim, admiring more ice sculptures and the views of flat, brown, high desert to the east. The rime formations on the stone camp shelters were the most impressive of all. 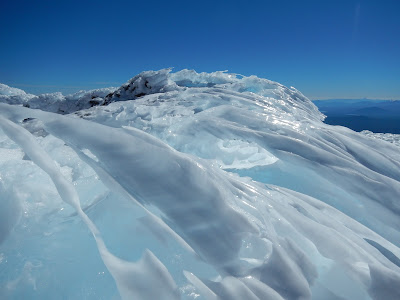 Once the rim walk became too sketchy, we dropped down to traverse on softer snow, then made the final climb to the summit. Here, we celebrated with lots of photos, chocolate and whooping and hollering. It took us 6 long hours to get here. Although it felt easier to walk on the snow than walking on scree, I think it ended up being more physically and mentally challenging to deal with the snow. 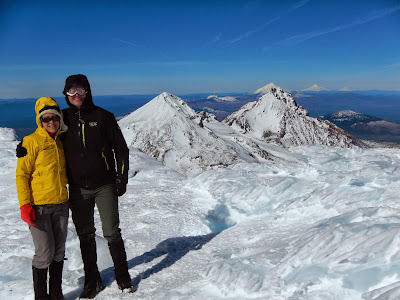 Looking north, we saw the snowed in tops of Middle and North Sister. Beyond that, all the volcanoes stood in contrast to the clear, blue sky: Jefferson, Hood, Adams, St. Helens, and even Rainier. The visibility was great. I hoped everyone realized how much of a treat this view was; these conditions just don’t happen every day!

It was 2:30 pm by the time we started heading back down. I was a little concerned about the higher chance of someone in the team slipping and falling on the descent. It can feel a bit more harrowing when gravity is working with you to pull you down the mountain. Before stepping off the crater rim, I offered some technique suggestions for walking down the icy snow. We took our time, and with only a few minor missteps, we quickly made our way back to the saddle below the glacier.

Just for fun, we found a few good spots to go for a ride: 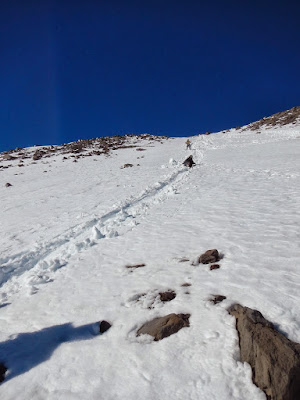 All the while, I couldn’t believe how hot the sun felt. The air was calm and the sun blazed down as if it were still August. Everyone stripped down to base layers and still had to stop frequently to cool down. I happily rubbed my skin with handfuls of snow every time I got the chance.

Our only goal was to get back to the car before sunset. As beautiful as this landscape was, we had ample opportunity to take it all in and it was time to go. We arrived at the car around 6:30, a surprising 10 and a half hours after we departed. Everyone was brimming with excitement of the team’s  accomplishment. We all pushed through some barriers and came out stronger, more competent climbers. Plus, we got some bonus training for the snowshoe trip coming up in December. Crater Lake is going to feel frankly civilized after this.

Thanks to everyone on the team for making this an unforgettable trip! 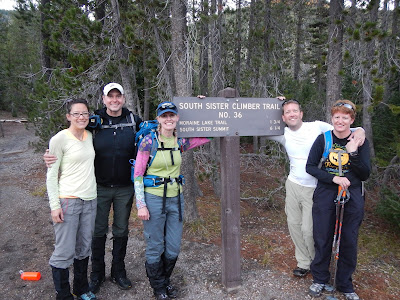