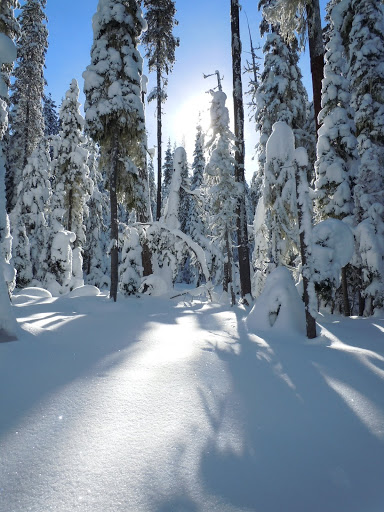 I escaped Portland in the early afternoon to make my way down towards Willamette Pass before the brunt of holiday traffic. This year I hoped to replicate the amazing winter getaway of 2009 on this very same weekend. Due to some recent snow and cold temperatures, tire chains were required for the very last stretch of the drive to the Sno-Park. Since I hadn’t put on chains in a while, I had to beat them into submission to get them on my car and then I was ready to hit the road again at a raging 30 mph.

I pulled into the enormous parking lot and left my car behind, alone, under a cloudy, moonless sky. I loaded up my backpack with lots of gear and goodies, including a whole cherry pie, which I carefully placed beneath the cover of my pack, and cinched the straps tight. With a heavy multi-day backpack on and snowshoes in my hand, I waited for a gap in traffic to cross Route 58 to begin the snowy road walk to the shelter. Here was mistake number one: putting on snowshoes in 4 feet of soft snow with 40 pounds on my back. It was a steep learning curve to get back into the swing of winter travel. 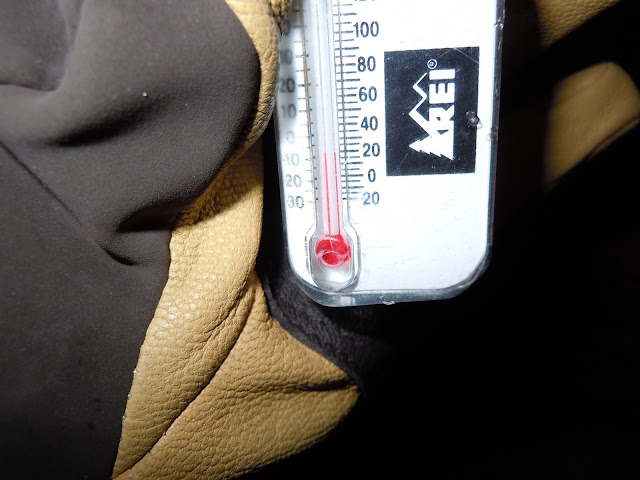 The road had some old ski tracks that I followed about 75% of the way. The tracks were just narrow enough so that I had to plow through fresh snow with my right foot the whole time. I quickly worked up a sweat and de-layered to be comfortable. I kept my water bladder hose tucked into my shirt to keep it from freezing in the chilly evening hours. Eventually the tracks stopped, abruptly, and I had to put new tracks in with both feet. This slowed me down a bit, but I was in no rush. I tried to quiet my breathing and enjoy the still, nighttime air. The snow sparkled by the glow of my headlamp. It was as if I was a giant in a stadium full of eager photographers, snapping thousands of pictures of my epic journey. As the road twisted and turned through the forest I kept my eyes peeled for my sleeping quarters: a three-sided shelter with a wood stove. Shortly after entering the summer campground I spied my destination and happily marched towards it. The feeling of my pack dropping from my hips was wonderful.

I found the shelter to have no axe for splitting wood, so I fumbled with my knife to make a pile of wood shavings for kindling. After struggling with my cheap gas station lighter and wood that didn’t want to burn, I managed to get a blazing fire going to help warm me up. The temperature kept dropping; it was going to be a cold night. I slept in my down bag with a down jacket and booties on too. My dreams were full of snow.

I awoke late and spent a leisurely morning cooking breakfast, rearranging my pack and studying the trail map. The sun shone brightly overhead, encouraging me to get moving. I left the shelter behind, excited to follow my tracks back to the Maiden Peak trail. This would be the only stretch of easy walking I’d see today. The trail climbs, somewhat gently, through a beautiful forest. The tree limbs were draped with several days’ worth of fallen snow. Rays of light from the sun permeated the sky, slowly melting the snow clinging to every surface. All of this was wondrous and lovely for about an hour, after which I began dreading each footstep through shin- to knee-deep powder.

About a mile into my walk, I stopped dead in my tracks as a horrible realization shot through my brain: I’d left the cherry pie at the shelter. I had hidden it among the woodpile in hopes that critters wouldn’t discover it as I slept. Of course, I wasn’t going back for it. Bummer. That was a lot of calories to leave behind. 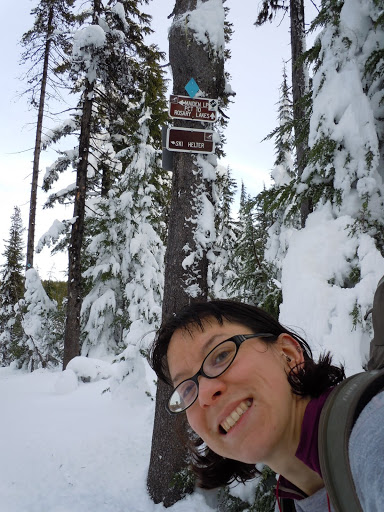 Even without the sadness of a missing pie, this is quite possibly the worst stretch of the trip because it is 2 miles before the first trail junction; that’s 2 long miles of not knowing where you are and how far you’ve gone. It took nearly 3 hours of snow trudging to complete this section. By the time I reached the trail sign, the sun had warmed the snow to a wet mashed-potato type consistency and snow bombs were dropping from the tree tops. More than a few times I got nailed in the face or down the back of my neck with arboreal artillery. As I continued walking, the trail traversed hillsides and climbed gradually up towards the cabin. My legs and my pack grew heavier as I walked. Finally, 5 hours after I’d left the shelter, I arrived at my resting spot for the night.

But the work was not over yet. First, I shoveled out the entry way, which had been covered by recent snowfall. Then it was time to split some wood for the fire. Once I got a fire going, I unpacked and settled in. An hour and a half later, a group of three, towing two sleds, arrived at the cabin. We’d share this space for the next two nights. 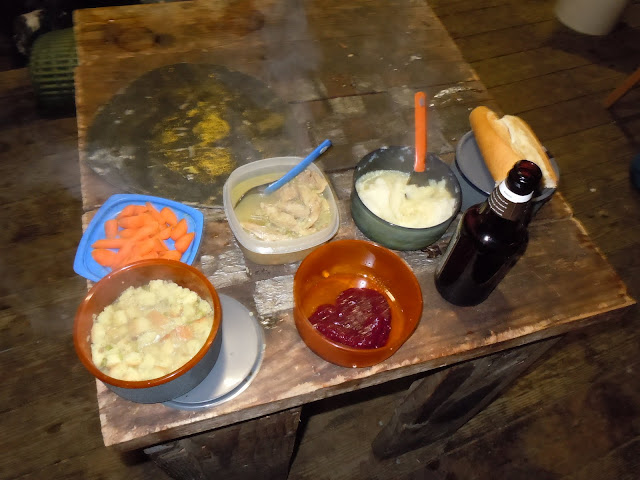 My Thanksgiving feast was well earned. I had turkey meat with gravy, mashed potatoes, French bread and butter, cranberry sauce, carrots, cornbread stuffing, and cold beer. I almost couldn’t pack all the calories in. Fortunately, my pie vacuum was filled by a warm piece of pumpkin pie brought in by the other three at the cabin. It was perfectly blissful. 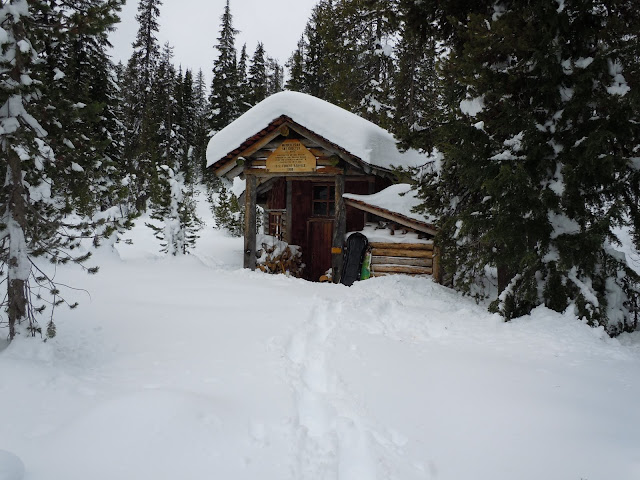 Oh, the joys of sleeping in. It had been a sweltering warm night sleeping in the toasty cabin loft. I awoke with the noise of three bodies shuffling about the cabin. It was 9:30.

One huge bowl of oatmeal and slice of warm bread later, I pared down my enormous pack to the bare essentials for the afternoon and headed off towards Maiden Peak. The group assured me they were headed the same way, so I was encouraged that I wouldn’t be the only one breaking trail all day. I walked out under cloudy skies and just below freezing temperatures, which was a little warmer than I would have preferred. It was now that the blue-diamond hunt began. The meandering path up towards the summit travels through a forest with well-spaced trees and nondescript terrain. Without trail markings it would be impossible to stay on route. There were absolutely no remnants of tracks to speak of. 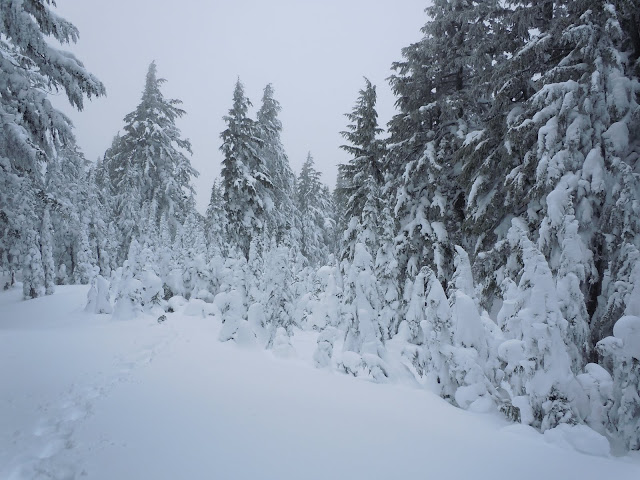 I played life-size connect the dots with the blue diamonds about 80% of the way up to the top, at which point I predictably lost sight of the path. Since I knew I was getting close, I took the nicest looking path up until I couldn’t go up anymore. I reached the false summit and recognized the location from last year. Looking through the clouds I spied my true target and cranked it into high gear. Standing atop the viewless, snowy peak with moisture swirling around my face, I snapped a few photos and barreled back down to the comfort of the trees. I passed one of the other guys heading up on skis on my way down. SURE, how convenient…..

But, it was glorious to be able to follow tracks all the way back to the cabin. It took me half the time coming down as it did going up. My day of solitude continued a little while longer as the group was out gallavanting for a few more hours. I jumped right to splitting a huge pile of wood to last the evening. Once the fire was going, I laid down on a mat in front of the stove and dove into some reading.

Once the troops returned, we ate, drank, and played cards. By 9pm we were all winding down from an active day. And, to think, we’d only been awake for almost 12 hours…life in the winter woods is simply exhausting. 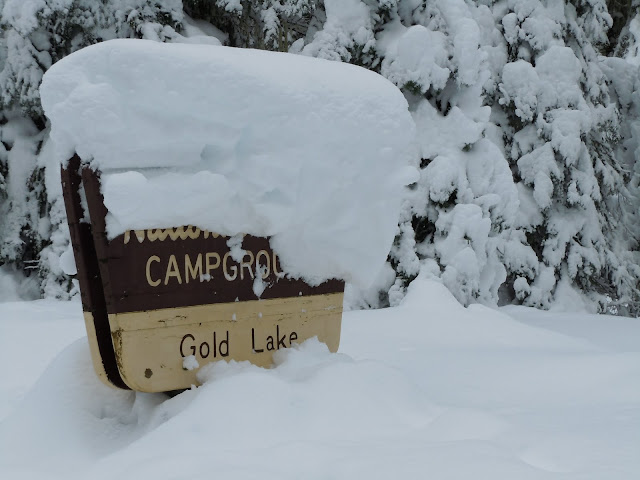 The next morning I was intent on leaving at a decent hour so I could make the drive back to Portland without running out of steam. I multi-tasked during breakfast, packing in between bites of cereal and sips of coffee. I tried to finish up the last of my food items; I’d rather carry weight in my stomach than on my back. Just before 10 am I bid my companions adieu and attempted to find my old tracks in the snow. Much new snow had come down in the past couple of days; again I found myself breaking new trail in anything from 3-8 inches of fresh stuff. But now it was mostly downhill walking, which I rather enjoyed. It seemed much steeper than I remembered. I guess it was the elevation gain as well as the weight that made my journey up here feel so arduous! Today the air temperature was a bit cooler, so that meant I wouldn’t be dodging snowballs from above. In no time at all I found myself back at the Gold Lake Road, and I had one easy decision to make.

Just a quarter mile up the road was the Gold Lake Shelter, where I’d mistakenly left my pie. I decided to go back there and recover it. It had clearly snowed judiciously down here, and the only tracks in the snow were deep cross country ski tracks. I had no choice but to plow my own way alongside the tempting-looking rut in the powder. It took me about 20 minutes to reach the shelter, where I found my pie completely untouched! I dug through my pack for a fork and dug in. Just then, a group of three skiiers stopped by the shelter and I shared my pie with them. In return I received a mug of brandy-spiked tea, yum!

Refueled and content, I retraced my steps to the junction with Maiden Peak trail and again set out making fresh tracks. From here the road climbs gradually uphill all the way back to the Sno-Park. I found a comfortable, slow cadence for walking and stuck with it for most of the trek. I began running into skiers and snowshoers coming in from the other direction. There were so many I stopped counting; I imagine there were at least 30 people heading in today. I was immensely glad I was going the other way! The very last stretch was so well tracked by snowshoes I blasted out of there at warp speed. 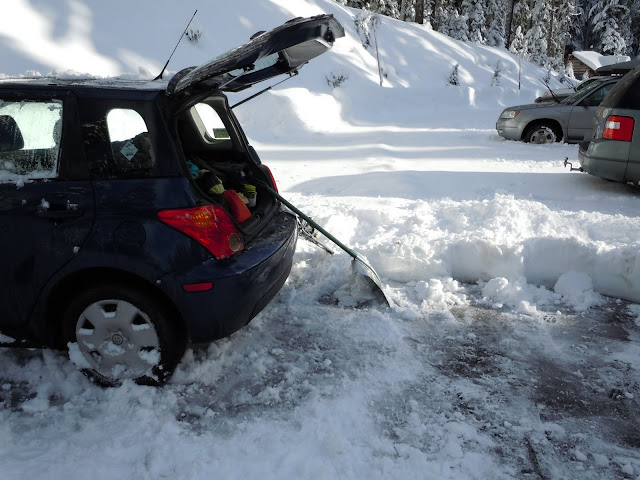 The adventure wasn’t over; my car sat buried under at least 8 inches of snow, and the plows didn’t even come near my car to clear a way to back out of the lot. Fortunately I planned ahead and put a snow shovel in my car. Some time later, I found myself with a cleared off car and a driveway shoveled out from behind my car to the plowed lot. Perfect.

Year two was a success. This is going to have to become an annual thing for me, I just hope it doesn’t catch on with anybody else! There is nothing quite comparable to being alone in the woods. Nothing is as peaceful, as quiet, and as challenging all at the same time. Every grunt and labored step is merely an entry fee into a pocket of backcountry splendor that few people get to (or, want to?) experience.

The best part about being back home…is not having to put boots and snowshoes on to go to the bathroom.