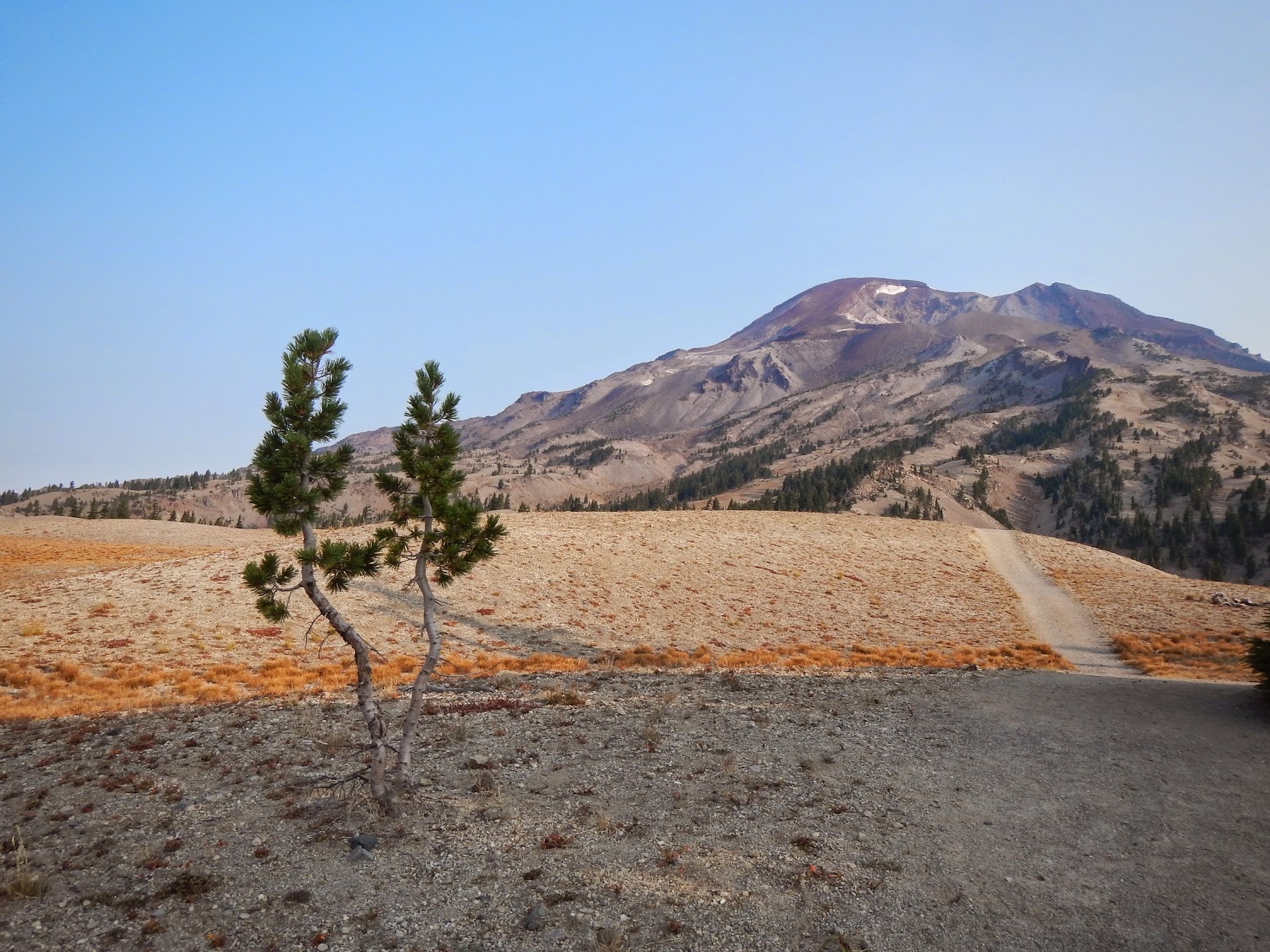 Ever since I’d read the first trip report of someone hiking to the top of South Sister in time to catch the sunrise, I’d had this trip on my to-do list. The thought of having the scenic advantages of being camped on top without having to lug all my overnight gear up there was very tempting. And so, at 11 pm on a Friday night, I set off on my quest.

It was 55 degrees out and the air was still. My headlamp afforded me a good 20 feet or so of visibility before fading into an inky abyss. I knew the trail well, and even under the darkness of night it was rather obvious. So many people hike this mountain every year, there’s a freeway packed into the earth. Well, at least on this part of the hike.

I was told to hike slowly to modulate my temperature and avoid sweating. But I don’t think I traveled any slower than normal. I was in a tee-shirt and light pants, and was sweating like crazy because of my gaiters.

In an hour I reached treeline, the first view of South Sister. I could barely make out a shape on the horizon that was slightly darker than the night sky. That was my mountain.

I wandered ahead, crossed the plateau, briefly distracted by two pairs of reflective patches that looked like eyes. Deer, maybe, or sasquatch. Whatever they were, they weren’t moving, so I kept on walking. It’s amazing the stories you can dream up when you’re alone in the dark for hours on end. 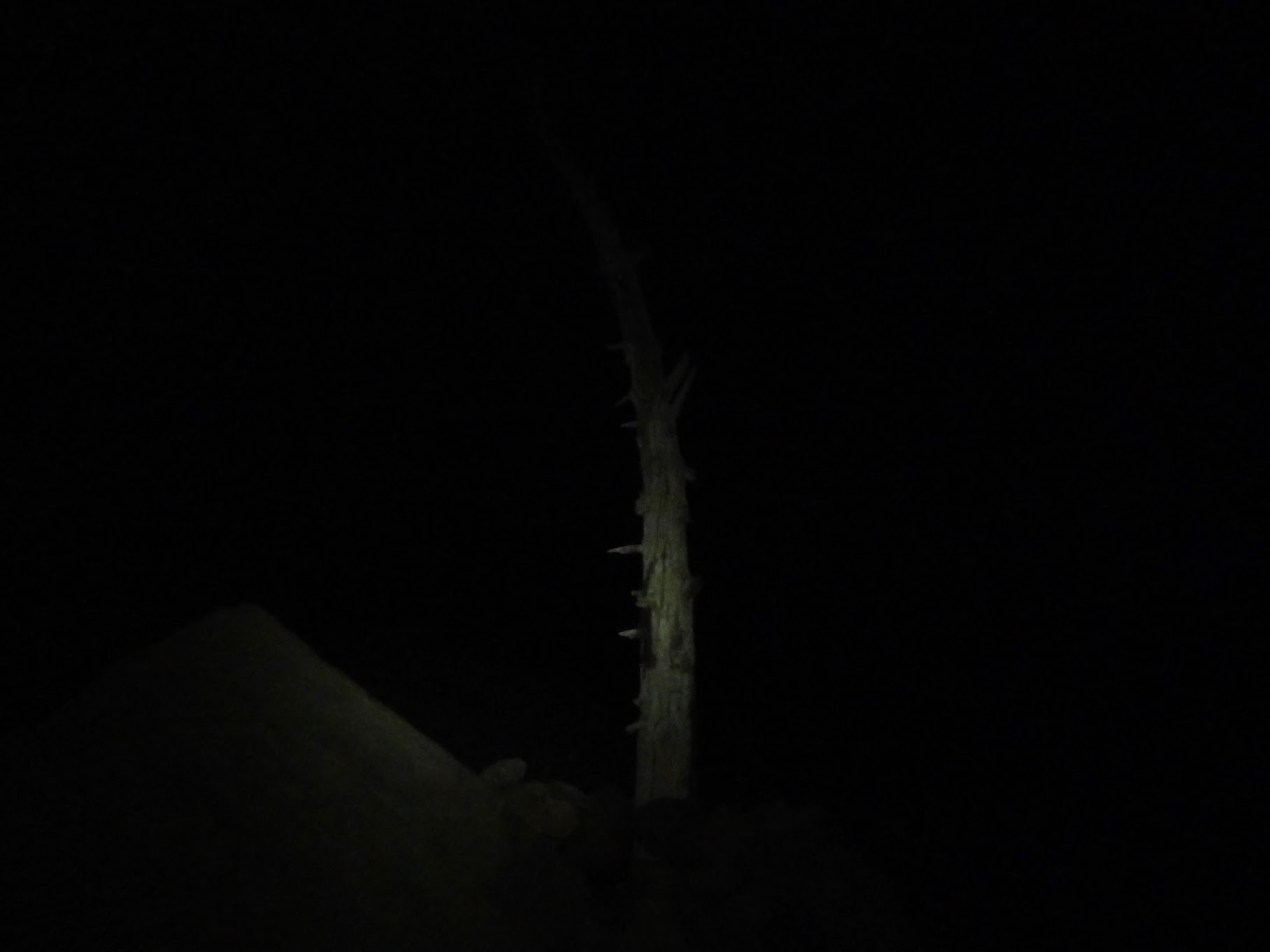 I began climbing again, this time on the shattered, gray rocks that lead up to the Lewis Glacier. This is where the trail became braided. I anticipated this, and kept looking for the cairns reinforced with tall, ghostly tree limbs. This worked great until I reached the end of the cairns. I knew there was a small rock outcrop to the left that I needed to skirt around, so I cheated to the right a bit…too far.

As I continued climbing, I knew I’d gotten off track but I figured I would stumble back onto the route soon enough. Instead, I kept walking up and up an increasingly steep slope that forced me up on a ridge with steep drop-offs in every direction. At the top of this feature, I stopped to assess where I was.

The lack of visibility put me at a huge disadvantage, but I had a map, compass and the GPS track that was running on my phone. After poking around a bit and using the tools I had to approximate where I was, I caught a very faint reflection of what I knew was the lake at the foot of Lewis Glacier. Bingo.

I scrambled back down the narrow ridge to the lake. Back on track, I sent a check-in SPOT message and took an extended snack break.

The wind began to pick up. I was way ahead of schedule so I packed on some layers and started walking, hoping that the extra clothes would force me to slow down. One foot in front of the other, I marched ahead on that final push to the crater rim. From the top, it was an easy traverse over to the rock pile marking the summit. 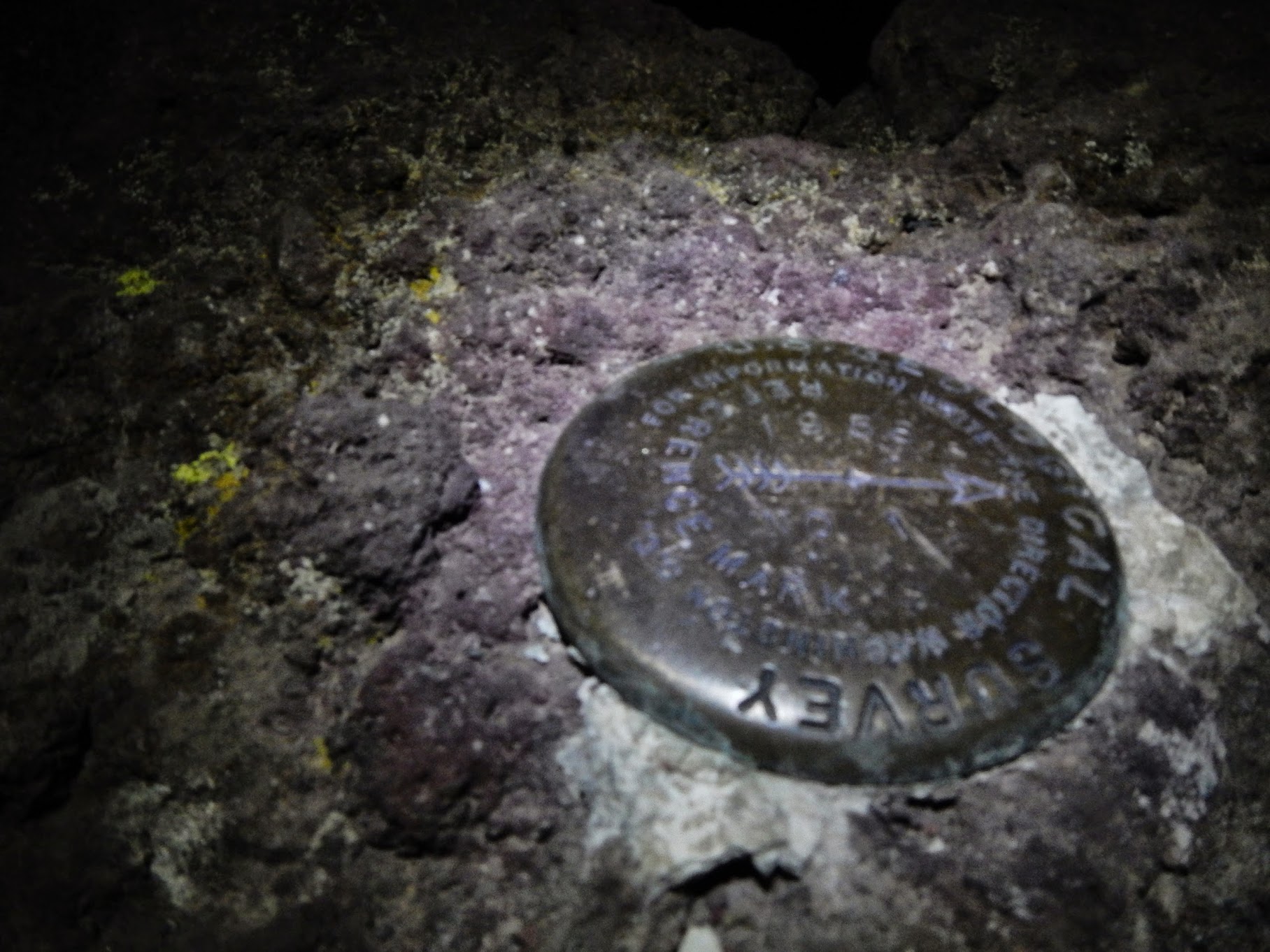 I put on my big down jacket, hat, gloves and rain pants. I crawled into my light bivy sack that isn’t much more than a reinforced emergency blanket, and hunkered down until sunrise. I wished I would have brought a foam pad for comfort and warmth. I closed my eyes, but only got a few minutes of sleep here and there. The wind was blowing just hard enough to be annoying but not freezing. 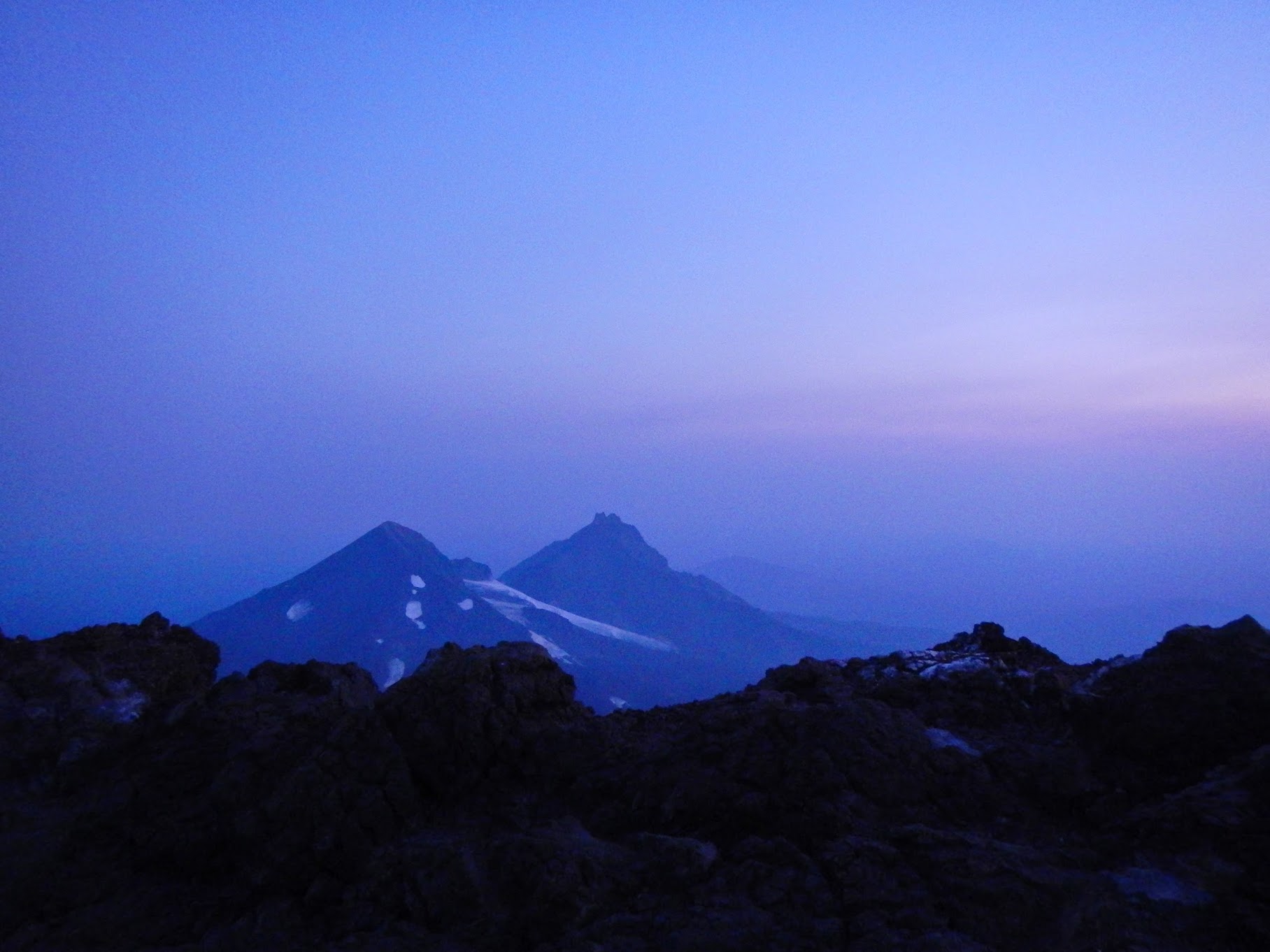 At last, the giant headlamp in the sky began to shine. It was just after 6 am. I’d never paid attention to how much a production the sunrise really is. Chilly and bored from having sat around for hours at 10,000′ I was amped up to keep walking. I poked around a bit, looking for good angles to look at the scenery without being too exposed to the wind. A half an hour later, I gave in and packed up to go. 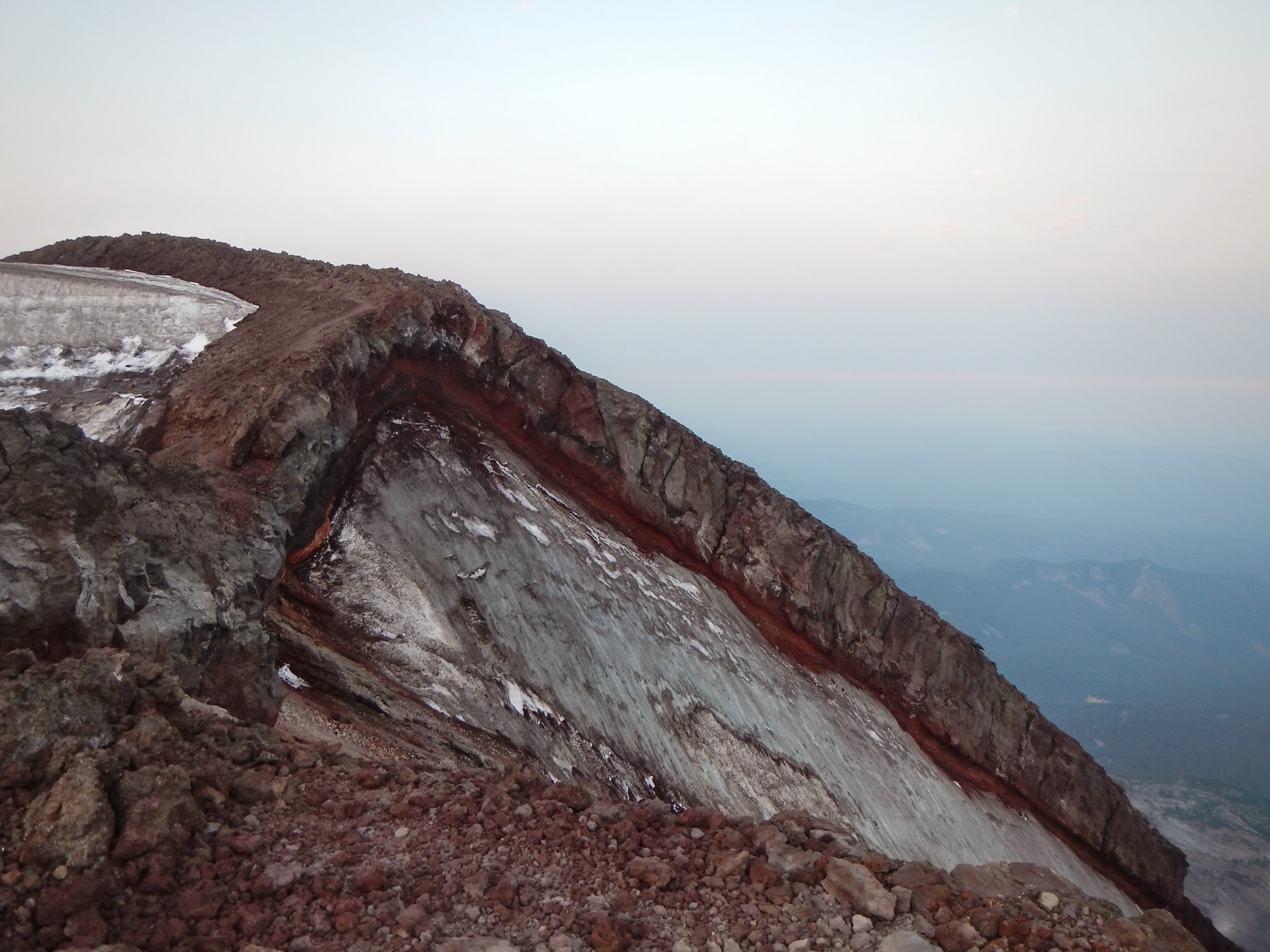 I walked counter-clockwise around the summit rim, taking lots of pictures the whole way around. It’s a beautiful route that few people bother to take. There were only a few spots that were a little sketchier than walking on the climb route, and easily navigable if you’re paying attention. From the other side of the crater, there were changing views of Middle and North Sister, and you could see down the rugged north side of South Sister. Looking back at the summit area, I saw one person emerge from an orange tent and walk out to enjoy the same views I was having. 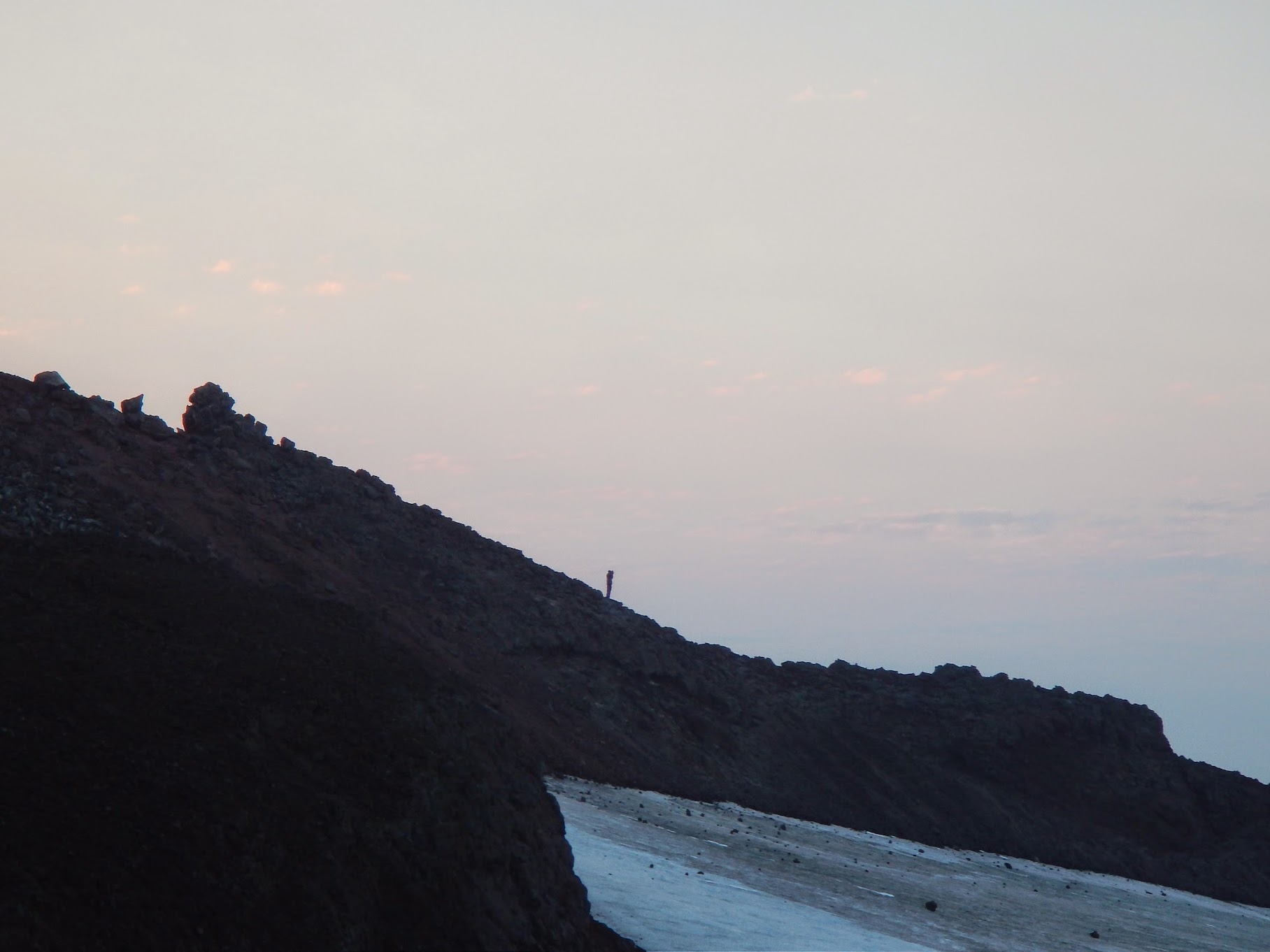 I slowly progressed along the rim, savoring the changing colors of sunrise. In one spot, what appeared to be rock was actually scree-covered ice, so I took a nice little tumble and whacked my knee. I chose a route on higher ground and got back to my circumnavigation. 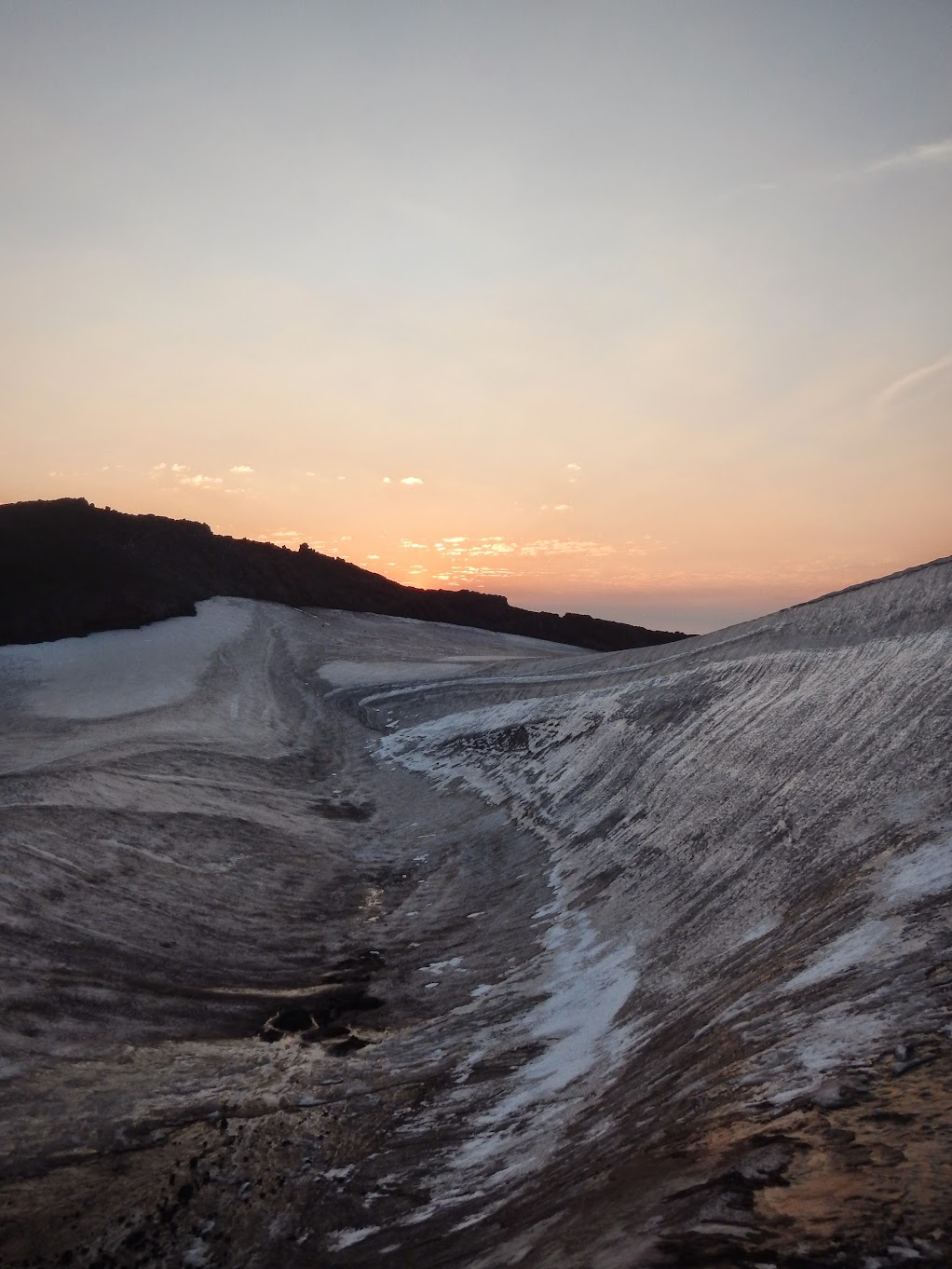 As I wrapped up my circular route I saw another person sitting at the edge of the crater and prepared myself for the onslaught of humanity I was about to encounter.

On my way down I had to explain to several groups that, no, I didn’t camp up there and yes, I hiked alone. There was the usual parade of archetypes trudging up the mountain. I’m always fascinated with the broad cross-section of people that make the pilgrimage up Oregon’s third highest peak. Matching shirt and fitness tights babe, REI-from-head-to-toe guy, bouncy youth group with tired leader in the back, grizzled old dudes, boyfriend carrying the backpack for girlfriend couple, these are all frequent fliers up here. But I was surprised to encounter a new character: guy hiking with a duffel bag in his hand. If I’d have seen him in any other context I’d be tempted to report him as suspicious. 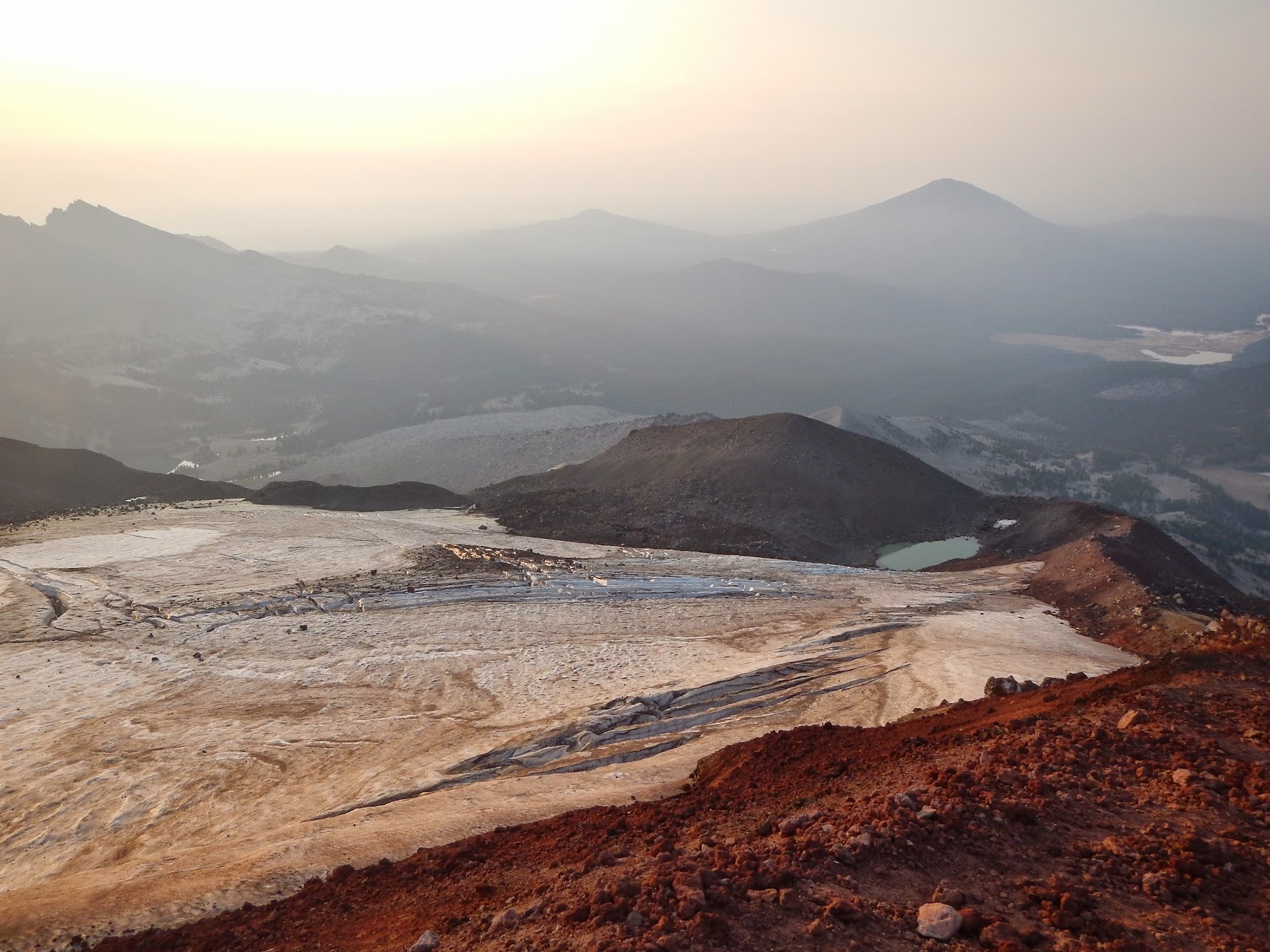 But none of that bothered me much. I was thrilled to be on my way down as the temperatures climbed up. Predicted to be in the 90’s that day; no thanks. I enjoyed seeing the scenery that I’d missed in the night. First, the fire red cinder bursting with color in the early sunlight. The dirty glacier and associated lake, plus the hill I’d inadvertently ascended on my night hike. Then, the dusty gray expanse snaking down to the broad plateau. The sky was hazy from nearby wildfires, so views of the surrounding peaks were obscured. Along the plateau, plants began to re-emerge. Tiny groundcover plants, prepared for the coming winter, lay flat against the earth, while rugged trees stood twisted and stubborn, anchored in for any kind of weather. 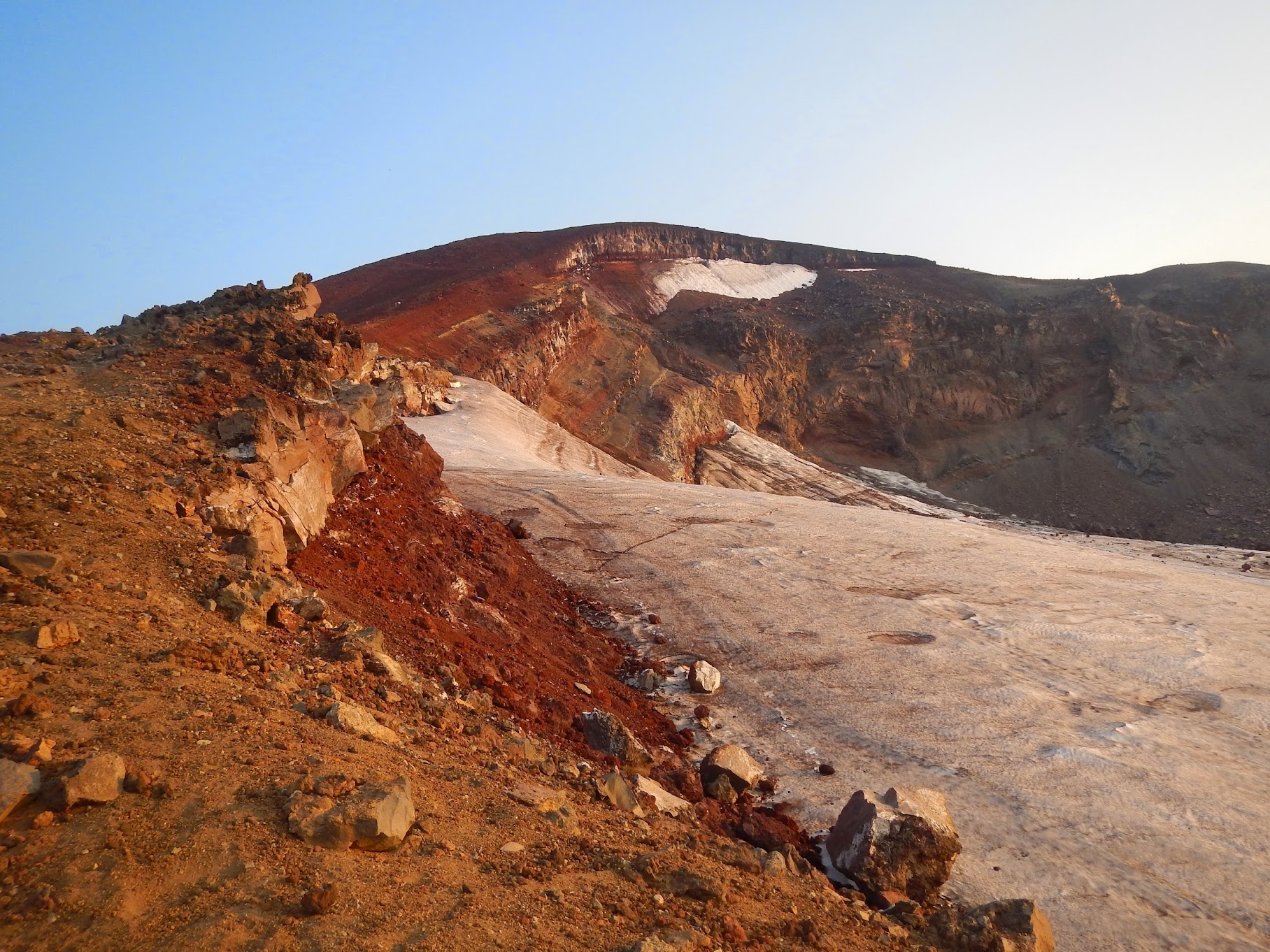 It was, and always is, a stunningly beautiful landscape. It’s a no-brainer why this area sees so much visitation.

I got back to the parking lot 2.5 hours after starting my descent. The parking lot was positively overflowing with cars. I wonder when this area will get a permit system. Seems like only a matter of time. I couldn’t believe how many people were starting their hike well after sunrise. It would be interesting to see what percent of hikers actually make it to their destination.

Another adventure in the books, another hike checked off the to-do list. Strangely, no matter how many I cross off the list, it doesn’t seem to get any shorter… I’ll be heading back to this mountain at the end of September with a group of (mostly) first-timers. It will be so much fun to experience the mountain through fresh eyes; I am thrilled to accompany each of them on this trip.

As for my next solo adventure, well, I’ve got some ideas.