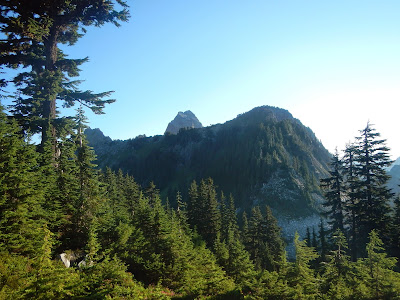 Skip to the photo album

It had been about 2 years since I’d even attempted to lead any outdoor rock, and I’d only been to the rock gym a handful of times in that period. So when my pal Rick recruited me to take him up a 5th class route on Mt. Thomson, of course I said SURE!

To be fair, the climbing on Thomson is pretty easy by climbing standards. The hardest moves are rated 5.6, but most of the climbing is 4th class scrambling and easy rock climbing. But the lack of practice with ropework, reading routes and dealing with exposure made me a little nervous about the climb. Nevertheless, I felt confident that I could rally and make the climb work for our little team.

Mt. Thomson looked impressive from the photos I’d seen on the Internet. It lay tucked away, buried deep in the woods (by climbers’ standards) 7 miles from Snoqualmie Pass on the PCT. Rick and I rolled into the trailhead at about 5 pm on a Saturday evening, hoping to make camp by sunset. 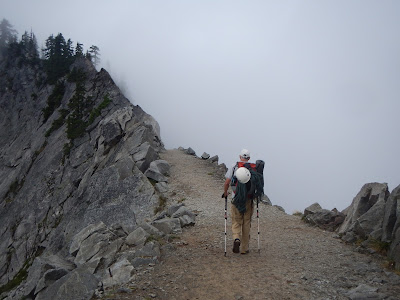 With hardly a few words of conversation, we busted out the 7 miles to camp above Ridge Lake in about 3 hours, barely pausing to admire the famed Kendall Katwalk (shown above) on our way. The lakes below us were overrun with campers, so we were happy to have our own little hideaway just a couple hundred feet up the trail.

We awoke the next morning to a view obscured by fog. We lazily ate breakfast and got our things together to head up the PCT in search of our climber’s trail. 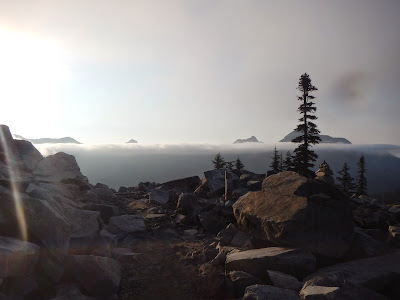 In about a half mile, we turned straight uphill in a steep drainage to reach Bumblebee Pass. The view from here looked just as cloudy as our view from the tent. We dropped down into the basin from the pass and traversed west across heather meadows and meandering mountain streams to the base of a large talus field. From there, we should have had a striking view of the south face of Mt. Thomson. Instead, we saw the talus rise into a low-hanging, gray cloud. I took out my photo of the route and tried to match up features on the base of the mountain with the view in front of me. We sat and waited for the clouds to rise. 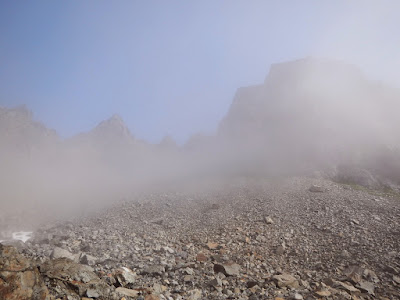 In the meantime, a couple trotted down from the pass and told us they were also headed up to the West Ridge. We waved them good luck as we continued to wait for a little clearing.

The curtain of clouds slowly began to rise. We ascended the jumbled talus up to the low point of the west ridge. Once there, we attempted to scout the route. After much futzing around, we made one dicey move to get to the belay ledge for pitch one.

And now, the climbing begins

Here’s where the gears in my brain began whirring at a mile a minute. We methodically got rigged up for the first pitch and triple checked everything. I looked up at the chimney, and over at the sloping traverse to get there, noting one very important thing. I’d need a 0.5 cam to protect the bottom of the route and I decided to leave all my small cams at home. Brilliant.

I looked behind me at the other team, waiting in the batter’s box for the two of us to get going. I noticed the leader’s bright, shiny, well-equipped rack. Luckily, he let me borrow his 0.5 and I was on my way. On. My. Way. Well, I’m not sure how long it took me to make that first move, but once I got up a ways and put that cam in, I slowly plodded my way up pitch one. 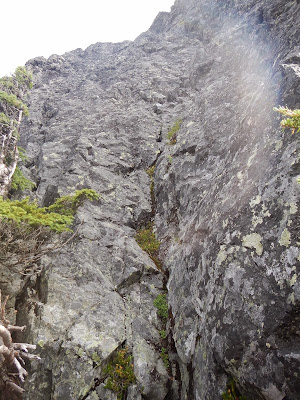 The first belay ledge was nice and roomy, with a big tree for an anchor. Yay. Now I was feeling back in the groove again. Pitch two felt a little more challenging for me, with a couple of bulges, not a lot of great pro (I needed those damn tiny cams again) and a lot of zig-zagging, causing too much rope drag. I called it good about halfway up and rigged up a belay station there. Once Rick joined me on the tiny and awkward belay ledge I started up pitch 2.5. I was sure glad I broke up this pitch because soon I was stopped in my tracks by a vertical wall with seemingly nowhere else to go. It looked harder than 5.6, I thought, but maybe that was just my rusty leading skills talking. I located every hand and foot placement I needed to tackle that wall, then all at once worked my way up to the next ledge. Rick told me afterwards that he made some pretty sick Chris Sharma moves to follow me up there. I pictured him gripping the rock tenaciously with one hand, swinging his hips powerfully to one side to plant a toe perfectly on the next rock nubbin, where he’d regain his balance and glide effortlessly to the next hold. 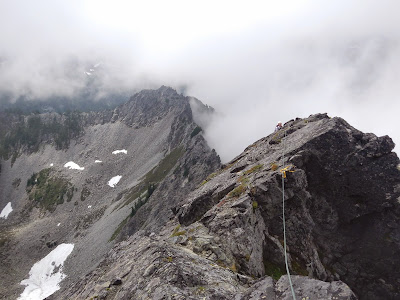 Pitch three: the slab. Certainly, I was excited to float up an easy slab after all that stressful vertical. Pitch four: more slab and blocky climbing. One account described it as a “5.4 staircase,” although this was not evident from the get-go. The exposure and not super obvious routefinding occupied my brain. I’d forgotten how much rock climbing can dial in your focus and allow you to remain entirely present. That’s the part I love. 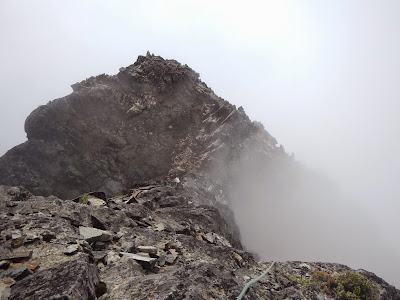 At the top of the false summit, we scrambled down a steep gully along a trail that led to the base of the final pitch. There was one last pitch of easy climbing to reach the summit. Thank goodness. Rick patiently dealt with a serious rope tangle, since I had absentmindedly forgotten to re-flake the rope, while I perched on a nice ledge. I knew a huge notch lay below me, but I couldn’t see the depth of it since it was filled with cloud.

Nearing the end of my rope (literally) I had to stop short of the summit, build a belay with the loosely piled rocks on the ridge and bring Rick up. From there, we untied and meandered over to the summit, reaching the top about 8 hours after we left camp in the morning.

Up until this point I had subsisted on about a half liter of water and an energy bar. I figured it was time to eat some food. We didn’t bring much water, since neither of us wanted to carry it up there, so we’d have to wait for a resupply down in the meadow. Good thing it wasn’t warm today.

Down the East Ridge

Again, our goal was to make it to camp before dark, so we headed into the unknown yet again to descend the east ridge.

We dropped down to the first rappel station, made a quick rap, then saw another tree wrapped with slings and rapped a second time. From there, it was not obvious where to go. We followed a faint path for a short while, then it seemed to disappear. Stupidly, I went to scout the rocky ledges and Rick split off to wander around in the trees. After much yelling back and forth, it was decided that Rick had the route that would work. We found a trail through the heather meadows that followed the east ridge down. My first thought was that the East Ridge as a climb would be boring as hell, switchbacking up a trail 95% of the way to the summit, so I was extra glad that we’d fumbled up the West Ridge. 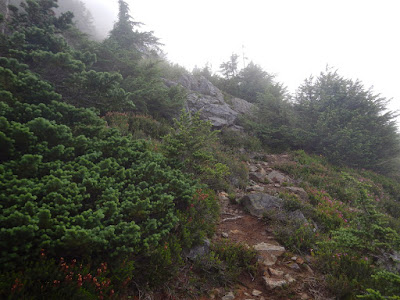 Eventually the trail led us to a notch that dropped down into the basin beneath Mt. Thomson. From there we traversed across talus and meadows, refilling our water bottles with stream water, then headed straight up to Bumblebee Pass.

We were both thrilled to catch sight of the PCT once we descended from the pass. That meant we were nearly done. At 7 pm, we crashed back into a soggy camp and quickly began refueling and rehydrating.

The next morning, the clouds had released their grip on the valley and a beautiful sunrise brought us out of the tent. It was going to be a bluebird day.

We took our time on the return trek, taking the opportunity to actually see the area we’d just spent a day and a half in. There were beautiful peaks, glassy lakes, and stunning vistas. The Kendall Katwalk, which had been mired in fog just two days before, looked a bit more like the pictures I’d seen (albeit still a little disappointing). 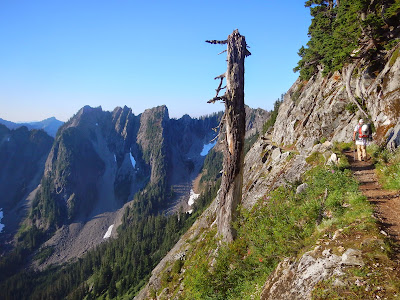 While we didn’t set any speed records on this trip, I’m glad we made it happen. I felt great getting back onto alpine rock and facing head on all the challenges it brings. It’s not always glamorous; in fact I find it so rare that people actually write about the hard stuff. Everyone’s always ready to inflate their ego retelling the epic awesomeness that they achieve on exotic and aesthetic climbs. But even the “easy” climbs present problems that need to be overcome. I appreciate the opportunity to be challenged, to be humbled and to be forced to think on the fly. Alpine climbing is truly an opportunity to apply everything you’ve learned and practiced, recognizing that the textbook placements you studied and easy as pie sequences are not always realistic.

I hope that Rick will again entertain the thought of spearheading another alpine adventure and force me to get out of my comfort zone again.