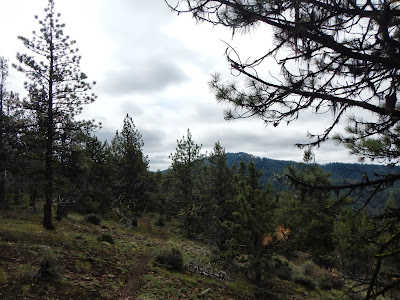 With plans to climb Mt. Hood falling through at the last minute due to inclement weather, I needed a substitute. There was no way I was letting a whole Saturday go to waste. I needed to be at Smith Rock on Sunday, so I decided to head east to the Ochocos to sneak in a long hike.

I didn’t have any hiking guidebooks with me, but I vaguely remembered hiking Lookout Mountain from the lower trailhead several years ago in the snow. I knew it would be a long-ish and pretty hike, with little chance of seeing any other people. It was an out-and-back on a single trail, so little chance I’d get lost. It was a go.

I unpacked all my mountaineering gear, and unsure of what to expect for weather out here, I shoved a variety of clothing layers in my backpack: hat, mittens, long pants, raincoat, puffy jacket, etc. Goretex trail shoes replaced the heavy duty boots I’d packed for Hood. I had long underwear on beneath short pants, plus a long sleeved shirt.It was a chilly start this morning.

Leaving the trailhead at 9 am, I glanced quickly at the warning sign posted right up front: “Warning: Mountain Lion Area. . . Hiking alone is not recommended.”

I started walking, alone, but I decided to take my hiking poles and a hunting knife as self-defense tools in the unlikely event of a mountain lion encounter. Although my rational brain knew I had a better chance of hitting the lottery, my emotional brain was stuck on repeat: “cougarcougarcougarcougarcougar.” After walking for a couple of miles, I was able to settle down and enjoy myself a bit more. I guess I’d rather be taken out by a cougar than by cancer, anyways. Quicker, cheaper, and makes a much better story. 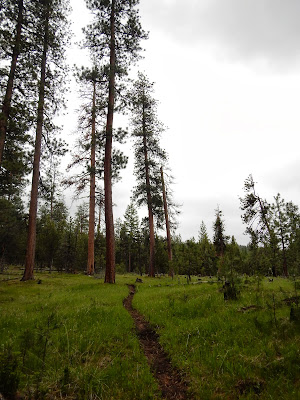 The Lookout Mountain of today was much different than the mountain I’d traveled in January, several years ago. The ground was free of snow. Wildflowers poked out of the soil almost everywhere I looked. It was very pretty, and perfectly quiet. 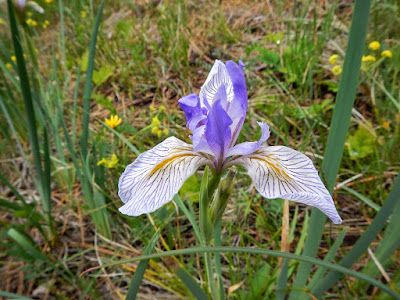 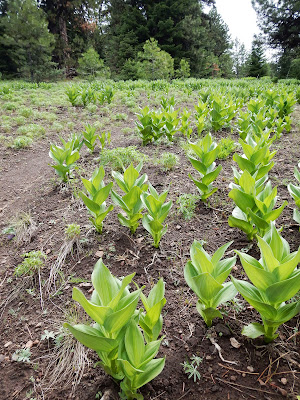 The trail was well established, and alternately traveled through open forest with big meadows and through more dense, dark coniferous patches. The start switchbacked up rapidly, leaving me out of breath fairly quickly. The massive piles of horse poop on the trail gave the added difficulty of running an obstacle course. But soon the grade petered out a bit and gently rose and fell as it slowly gained the summit ridge. Occasionally I’d get views ahead of the long summit plateau. I remembered the last time I was here I had no idea where the summit was. Without a map today, I figured I’d run into the same problem.

The last mile or so up to the plateau was my favorite part. The trail traversed some grassy and rocky meadows. The trail became overgrown with wild onion and other tough, little alpine flowers. Remnants of an old barbed wire fence randomly appeared among the wild foliage. The wind began to pick up as the trail became more exposed. The clouds descended, almost in an instant, and a light snow began to fall. I put my raincoat on and pressed forward. 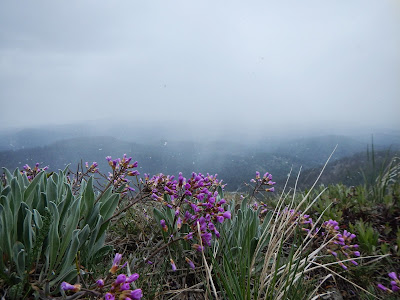 A few snow patches lingered on the trail, and I continued walking up and over tiny bumps, again wondering which one was the true summit. I stopped at a trail sign marking a junction, but still had no indication of where the high point was. With visibility and temperature both dropping steadily, I decided to call it a day there and retreated to a relatively weather-protected area beneath a large tree.

Here’s where this morning’s re-packing came in handy. I pulled out all my warm clothes: hat, mittens, long pants, and puffy jacket, so I could enjoy my lunch burrito in warmth and comfort. I watched as the tiny, dry snowflakes turned into big, fluffy flakes. Each flake twirled down to the ground gracefully, adorning the rugged flowers and twisted tree branches. It was a beautiful sight.

After lunch, it was time to head back. It really felt like a mini-blizzard now, minus the strong winds. I stopped frequently to photograph the snow on the flowers, and to feel the cold on my face. As I made my way back down the trail, the snow turned to drizzly rain, then stopped altogether. The temperatures rose back up to 50 degrees or more, and I had to adjust my clothing once again.

What a crazy day. There were a few sunbreaks on the way out, which felt really nice. I didn’t see anyone on the trail all day, and the only wildlife I encountered were some juncos and chickadees.

This was a great way to warm up the legs for a day of climbing. Plus the solitude always provides the perfect opportunity for a mental re-set, leaving me ready to take on any challenges I could face when returning to the built world. Happy solo hiking :).