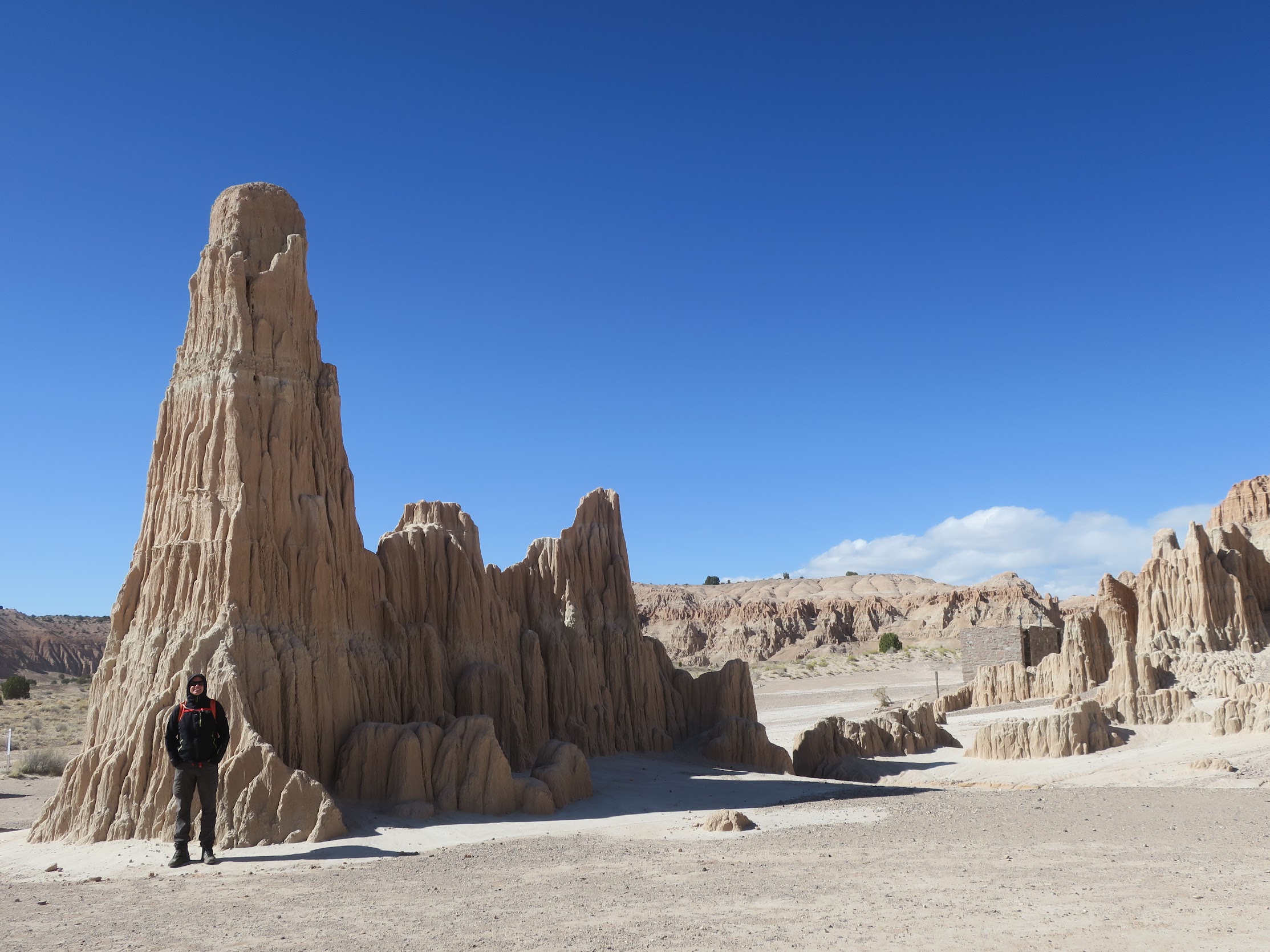 We arrived at Cathedral Gorge before lunchtime in order to increase our chances of getting a campsite. We had cut it a bit close yesterday. When we got to the park the campsite was pretty empty, so we had our choice of spots to choose from. After claiming a site we did a quick hike at Kershaw-Ryan State Park (not impressed), ate a picnic lunch on the lawn there, drove to Pioche for coffee and then returned to camp. It was still windy as hell and my foot still hurt, so you can imagine how awesome my mood was when it came time to take another walk.

We bundled up and set out for the Nature Loop, a half-mile interpretive trail. I could handle that. The trail was pretty meh but the Cathedral Caves were filled with unexpected treasures.

One note before the trail report: the signage at Nevada State Parks is absolutely ridiculous. The maps are gorgeous. But the table of data on every sign has so much superfluous information it’s almost laughable. No one visiting the park who’s heading out on a 1-mile loop needs to know information like “maximum cross slope,” “typical surface firmness (in inches, of course)” and “typical tread width.” WTF? Maybe this information is useful in internal documents, but not on a public-facing sign. Distance and elevation gain is pretty much all that’s necessary. But wait, the tables don’t even list elevation gain? I really couldn’t understand the impetus for such a sign. And they’re in every Nevada State Park we’ve visited. In an age when people’s eyes glaze over if they have to read a sign that says “pack it in, pack it out,” I can’t imagine anyone is understanding the information overload on these signs. Okay, rant over.

I had originally become interested in this park after seeing a photo in a AAA magazine. I was mesmerized by the colors and shapes carved into the unusual rock here. But that is all I knew about the place. What we discovered were tall, narrow hallways that burrowed into the fluted rock formations. Called “caves,” these passageways were unlike anything I’d seen before. The “rock” didn’t even look like rock, but like flaky, delicate piles of mud. It looked as if a single rainstorm would wash it all away. The passages were just barely wide enough for us to walk through. 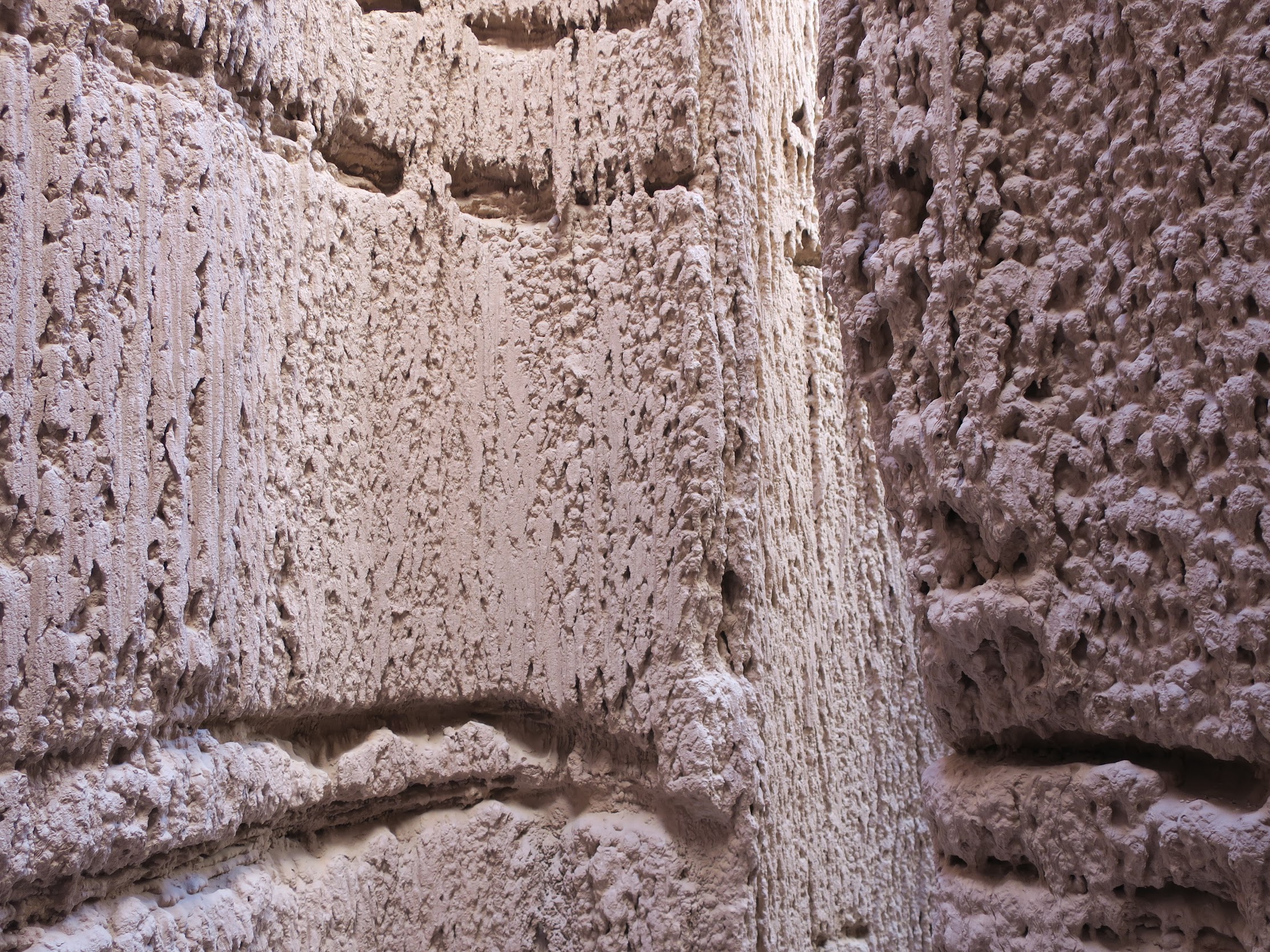 None were terribly long, but they were really fun to explore. You’d walk in a few yards, hit a dead end, turn around. Some of them had branching passages to explore. At each hallway terminus it felt like you could say, “beam me up, Scotty!” and be taken to another dimension.

A side benefit was that the caves offered complete protection from the wind, which we were reminded of every time we stepped out into the open. They were so cool! We spent quite some time oohing and aahing over the geology before trudging back to the campsite. It was so insanely windy that I holed up in the tent while Aaron prepared dinner, and we ate inside the tent, too. It was going to be another long night. 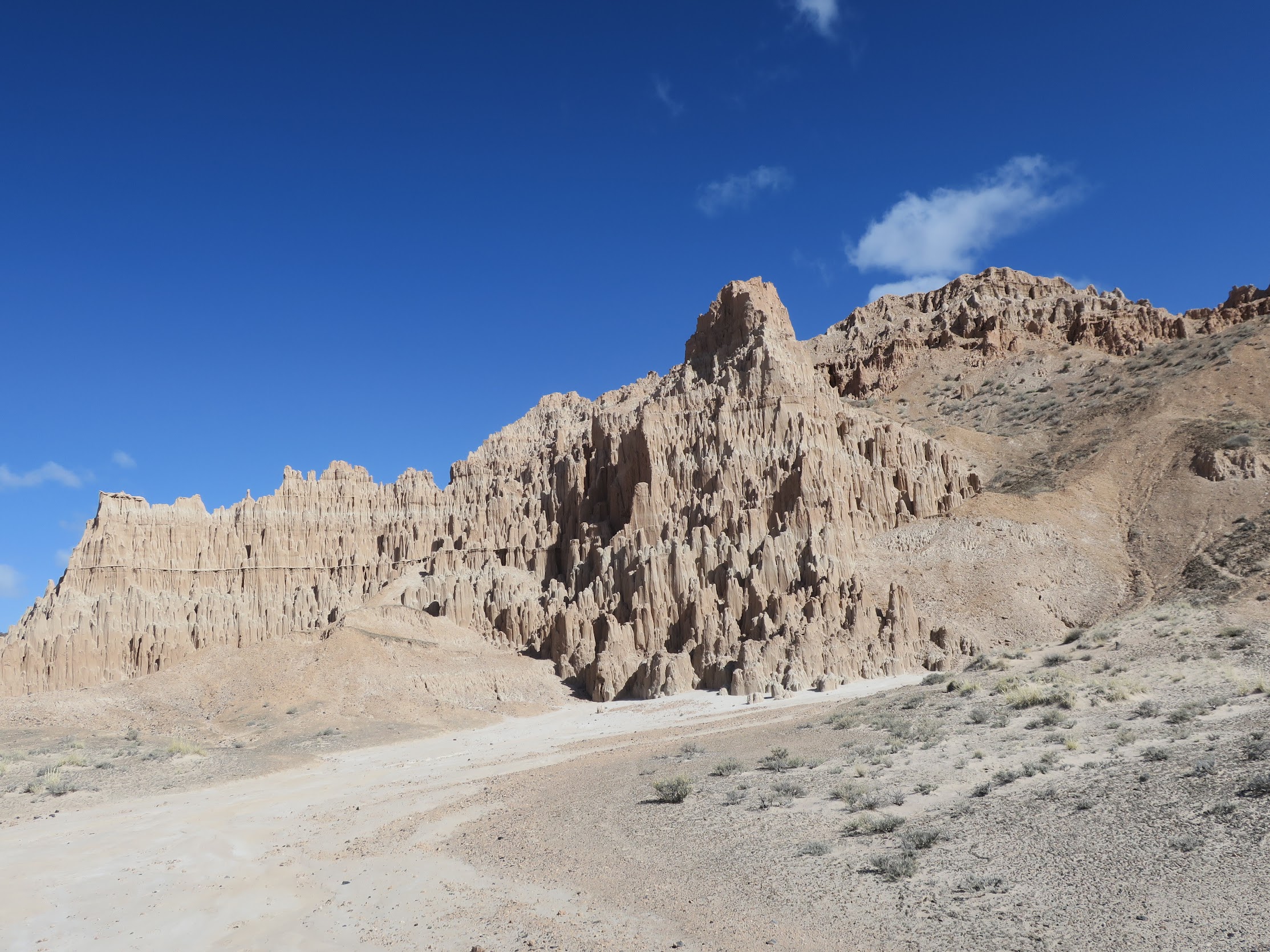 The wind blew hard all night long. In the morning, the air was quiet but cold. After breakfast we each enjoyed hot showers in the campground before taking a walk on the Juniper Draw Loop.

The trail passed close to the badlands formations that make the park so unique. I couldn’t take my eyes off them. The fluted spires and pillars that looked so fragile had, in fact, formed from ash deposited tens of millions of years ago. Geology is so in your face in the west. I remember yawning through geology class in college back in New Jersey, where all of it seemed so theoretical. But here it was tangible, visible, notable. You couldn’t deny it. How my life may have been different if I grew up here…

Along the way we saw jackrabbits and lizards. No snakes. I couldn’t believe I was on the tail end of a two week desert trip and I hadn’t seen one single rattlesnake. It feels like the only people who see rattlers are the ones who don’t want to see them.

We walked slowly around the loop. I was keeping my fingers crossed that my foot wouldn’t act up today. I didn’t want to push it. Looking down I noticed cryptobiotic soil. I’d first learned about this phenomenon on a visit to Utah a couple years prior. Between the rocks, the microbes, the animals, plants and weather there was a lifetime of science stuff to geek out on here. But we weren’t done yet. 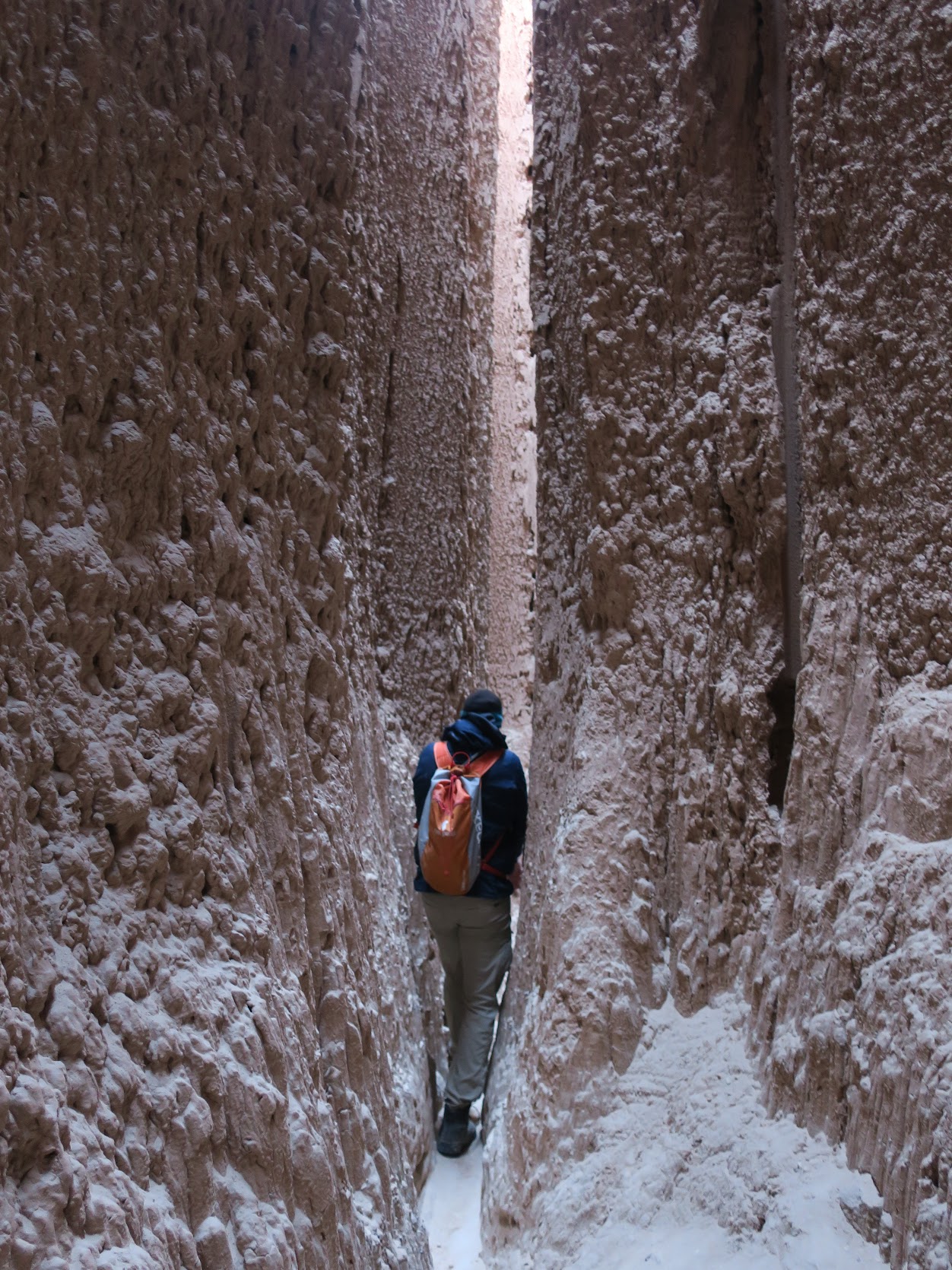 Near the end of the loop we came across more of those “caves.” Some of them were signed: Canyon Caves, Moon Caves. They were nearly identical to the ones we’d explored yesterday. But there were some passageways that led uphill, providing a view looking down into the thin hallways. I was terrified up there, as if at any moment the ground beneath me could collapse. We hurried back down to the safety of the floor and continued on our way. By now, my ankle was hurting. I got grouchy again and made a beeline for the car.

Despite the foot injury I felt like we made a good effort to see this park. While the colors weren’t as impressive as the (probably photoshopped) images from my AAA magazine, the experience was just as delightful as I’d hoped it would be.