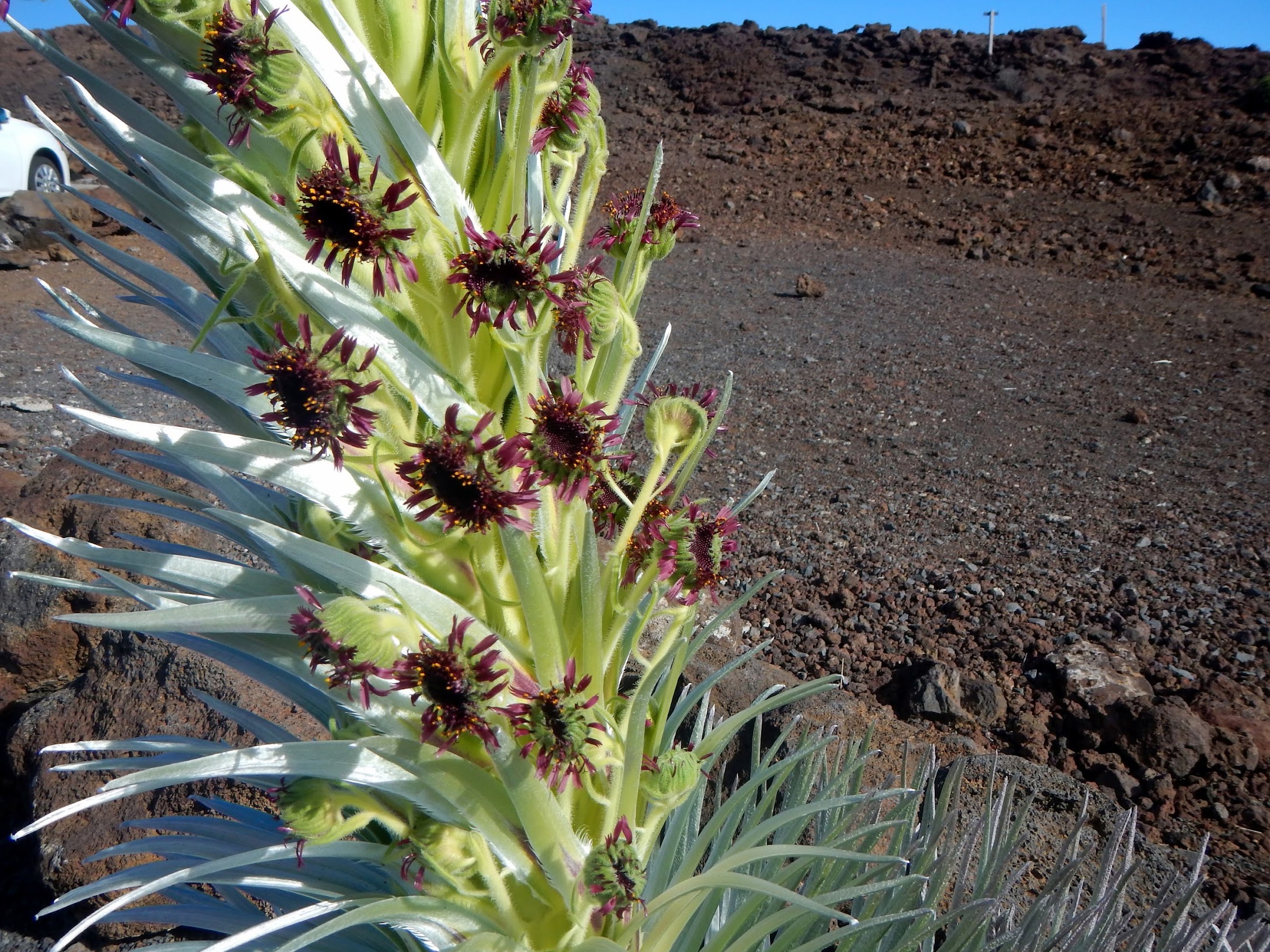 The Haleakala volcano comprises most of the land mass of Maui. It’s also part of the National Park system and it’s got a ton of hiking trails. So this was our next stop in exploring the island. Our guidebook mentioned that this was the place to go to watch sunrise, and that it’s totally a must-do item on the Maui bucket list.

One Google search pulled up images like this one: So I decided that there was no flipping way we were going to stand up there with all those idiots and watch a sunrise. Instead, we mosied up there at our own pace, with the benefit of NO traffic.

Since most people come super early for sunrise viewing, there were literally 3 other cars on the road the entire drive up to the summit. We stopped at 2 short view point hikes along the way that let us get a glimpse of the crater and feel the cool Hawaiian wind. One of these was the Leleiwai Lookout. This short trail was a great way to stretch the legs after sitting in the car. The chill morning air and steady wind snapped us right into hiking mode. Decked out in our warm layers, hats and jackets we strolled out to a magnificent viewpoint of the crater. Well, it’s not really a crater. Interpretive signs at the viewpoint describe the scenic vista as a depression formed by erosion near the summit of the huge volcano. What a coincidence. 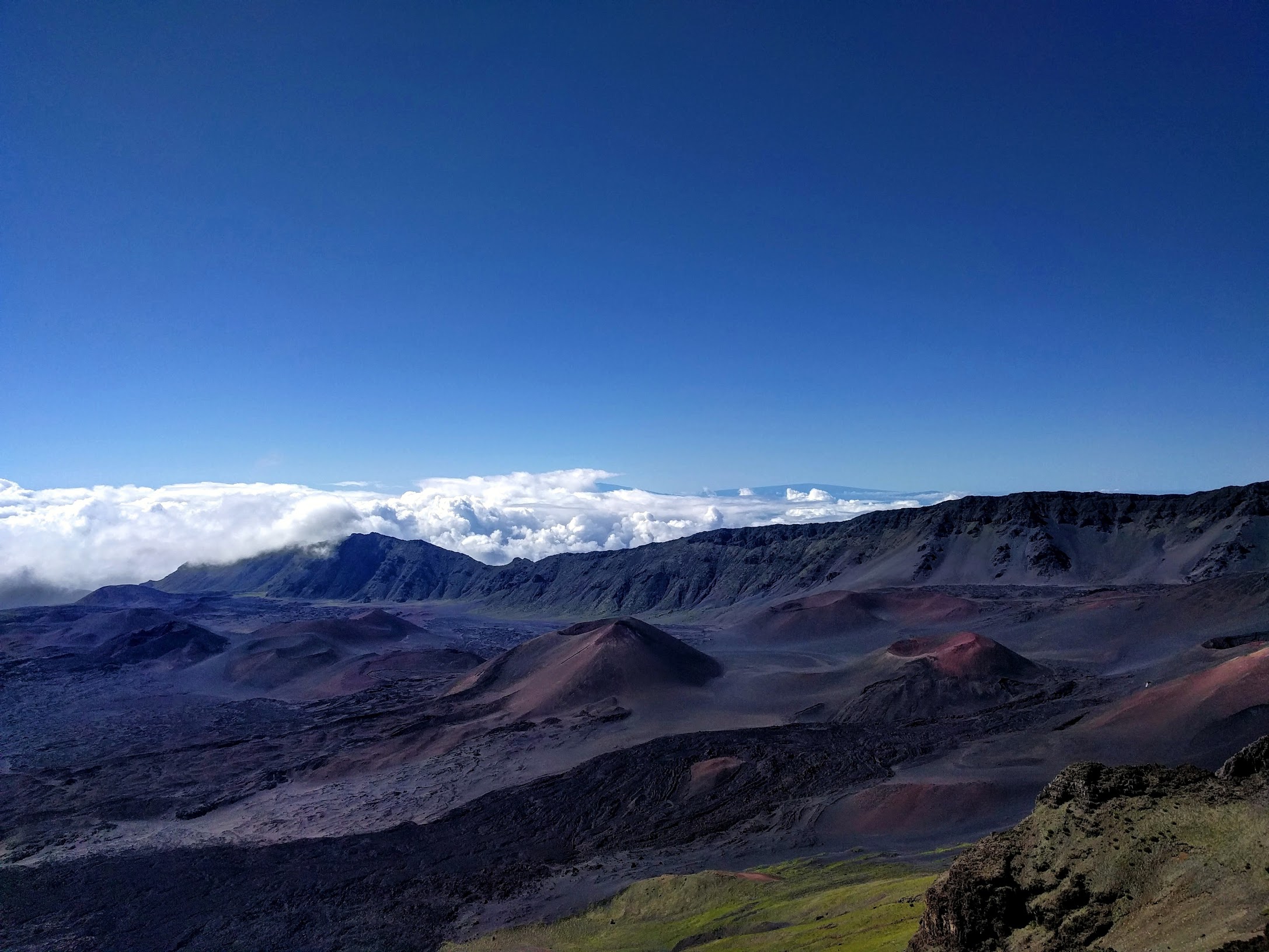 Next we reached the summit area,  where we wandered around admiring the silversword and looking for parking lot chukar.

At the park bookstore, I picked up some postcards and asked the ranger for hiking advice. We wanted to hike the Sliding Sands trail, and we were curious what the best options were besides an out-and-back along the same route. She recommended the traverse that went down into the crater, then up and out the other side. The only caveat with this hike was that we’d need to hitch-hike from one trail head to the other. Conveniently, there’s a marked pullout on the summit road for people wishing to do this hike, so that drivers can safely stop and pick up any hikers. The smart way to do this, she said, was to park at the end of the hike and hitch-hike to the summit so that you end up hiking back to your car. If you did it the other way, you might stand around and not be able to get a ride back!

With the ranger’s blessings, we drove back to the Halemau’u trail head and packed up for our hike. Another pair of hikers looked like they were attempting the same thing when we got there, so they hustled up to claim their spot along the road before we did. We were right on their tails. 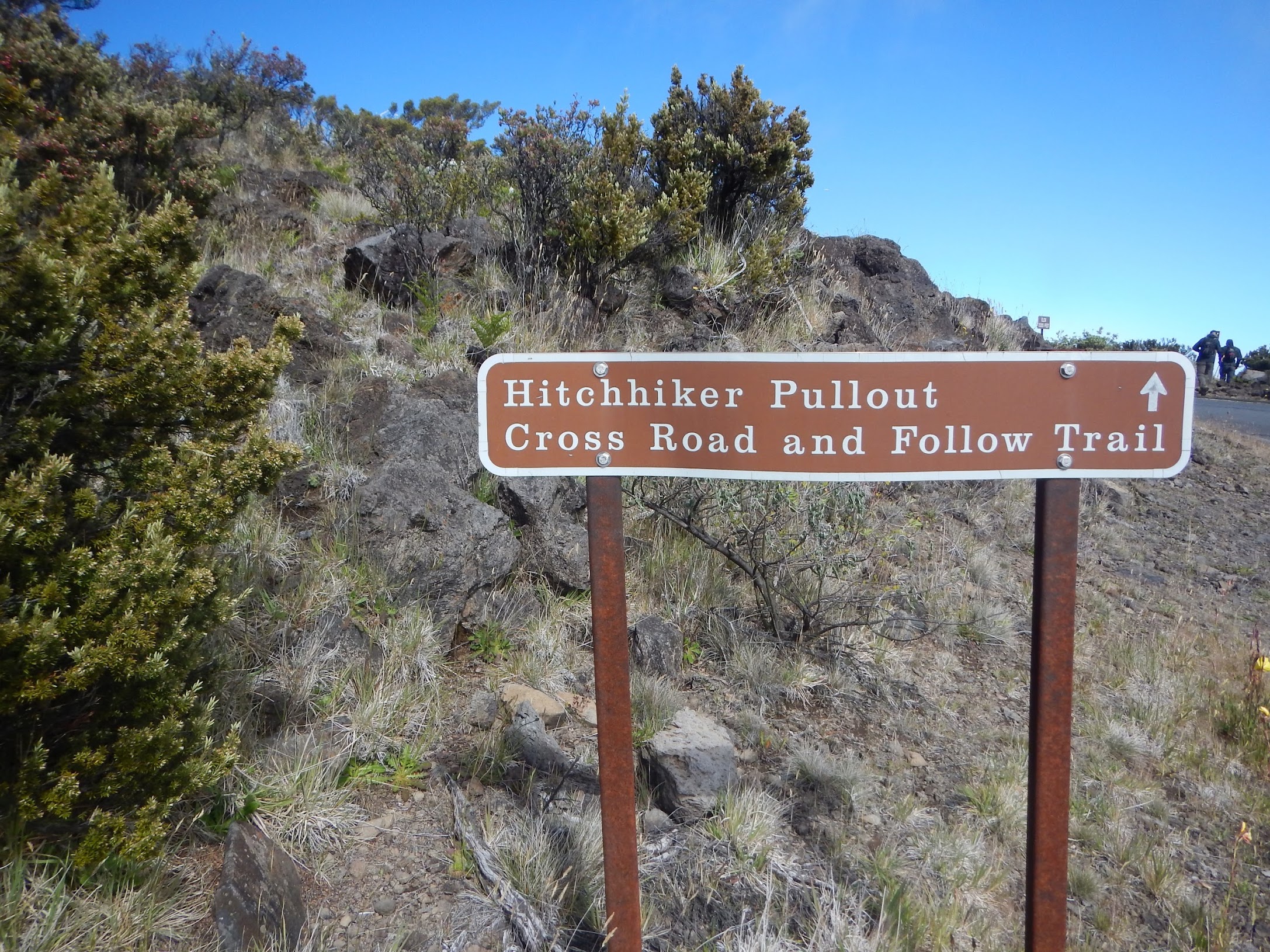 After 30 minutes of waiting with every single car driving right by us, one of the other hikers walked up and said what should have been obvious from the get-go: “Would you like to carpool and hike with us?”

We left our car at the trailhead and they drove the four of us up to the summit. It was finally time to begin our hike. 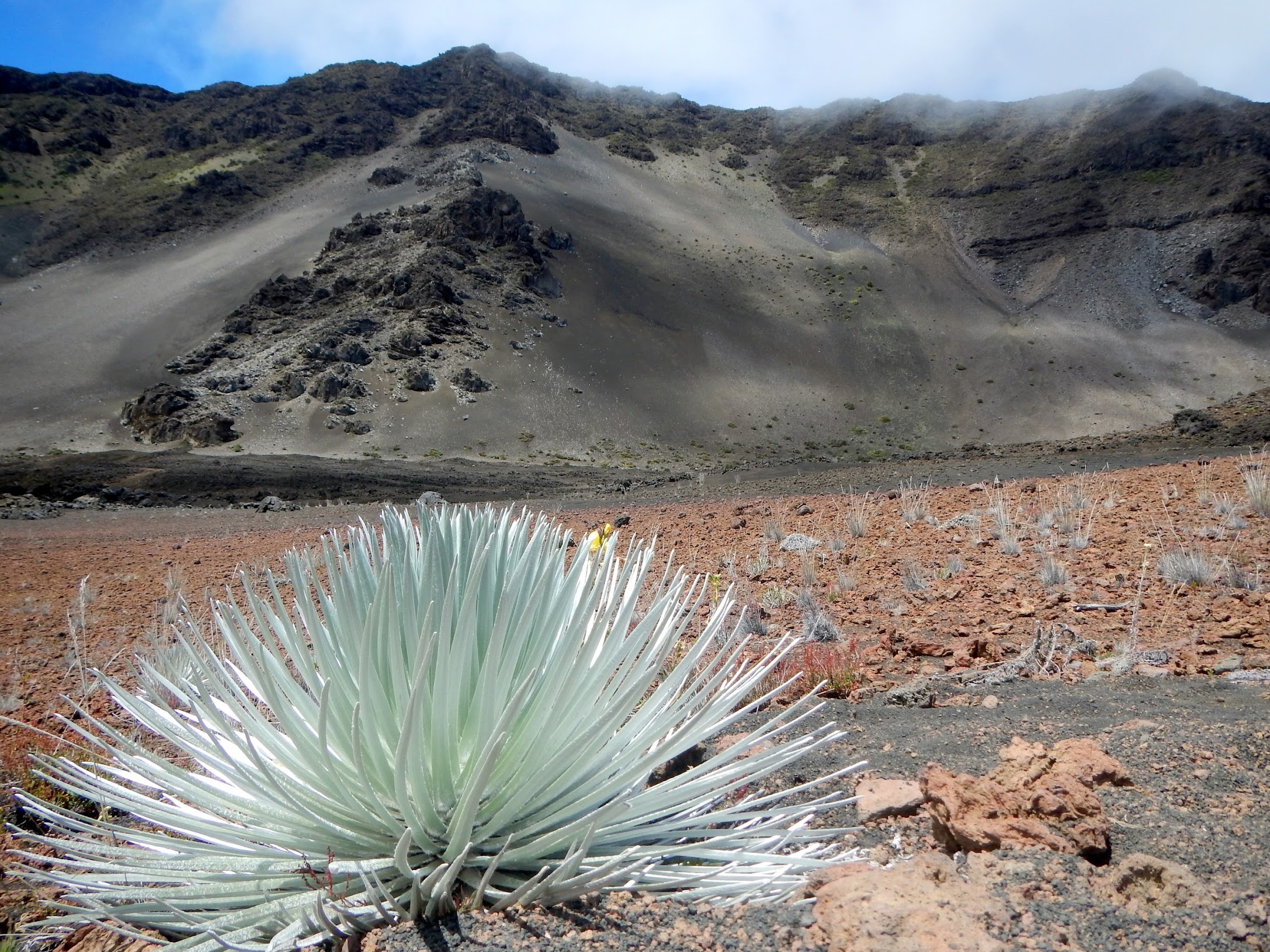 As we descended into the volcano, I could think of only one thing. Dang, this looks like Central Oregon! Again we found ourselves in a familiar landscape. With all the hype I’d read about this trail, I was surprised at how well graded and not loose it was. It was quite a nice walk. The sun was really strong even though the temperatures were quite moderate. We chatted with our new hiking companions from Seattle, Jason and Stacey, who kept a nice walking pace. 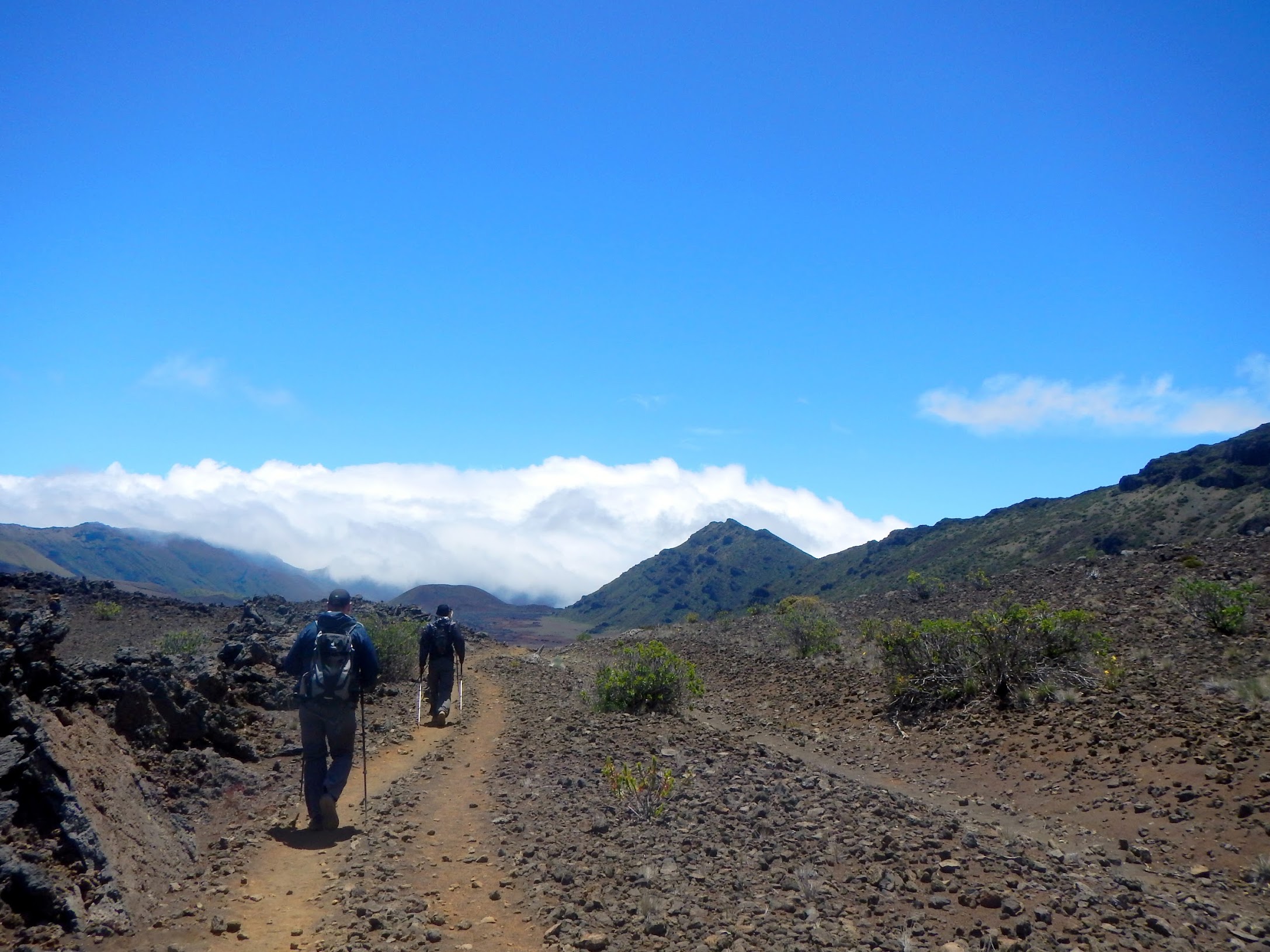 The landscape was barren, with metallic-green silversword plants dotting the brown lava rock. Occasional sprouts of color would appear. Interesting plants were somehow able to make a living up here. The trail cut through a broad depression containing several cinder cones. The rocks were colorful, too; bands of color painted the rocks in the distance.

Halfway through the hike we stopped for lunch at some big boulders in the lava. It was a nice opportunity to take off my shoes and let my feet relax. We didn’t bring hiking boots for this trip. Instead I was wearing minimal running shoes. The lava rock was really beating up my feet, but I knew I could just push through on this one hike. I’d recommend a stiffer-soled shoe for anyone considering this hike. Unless you’re tougher than I am.

As we were finishing our lunch, clouds filled the sky and it started to rain. We quickly packed up and headed out. The terrain was now changing from wide open lava fields to lush, green meadows. At the base of the cliffs near Holua we passed through a gate. On the other side, the trail began a series of gradual switchbacks that climbed the cliff. We’d transitioned right into the heart of the rain forest. Moisture hung in the air and visibility dropped significantly. We could just see the trail up ahead. Magnificent ferns grew in thick clusters on the rock walls. 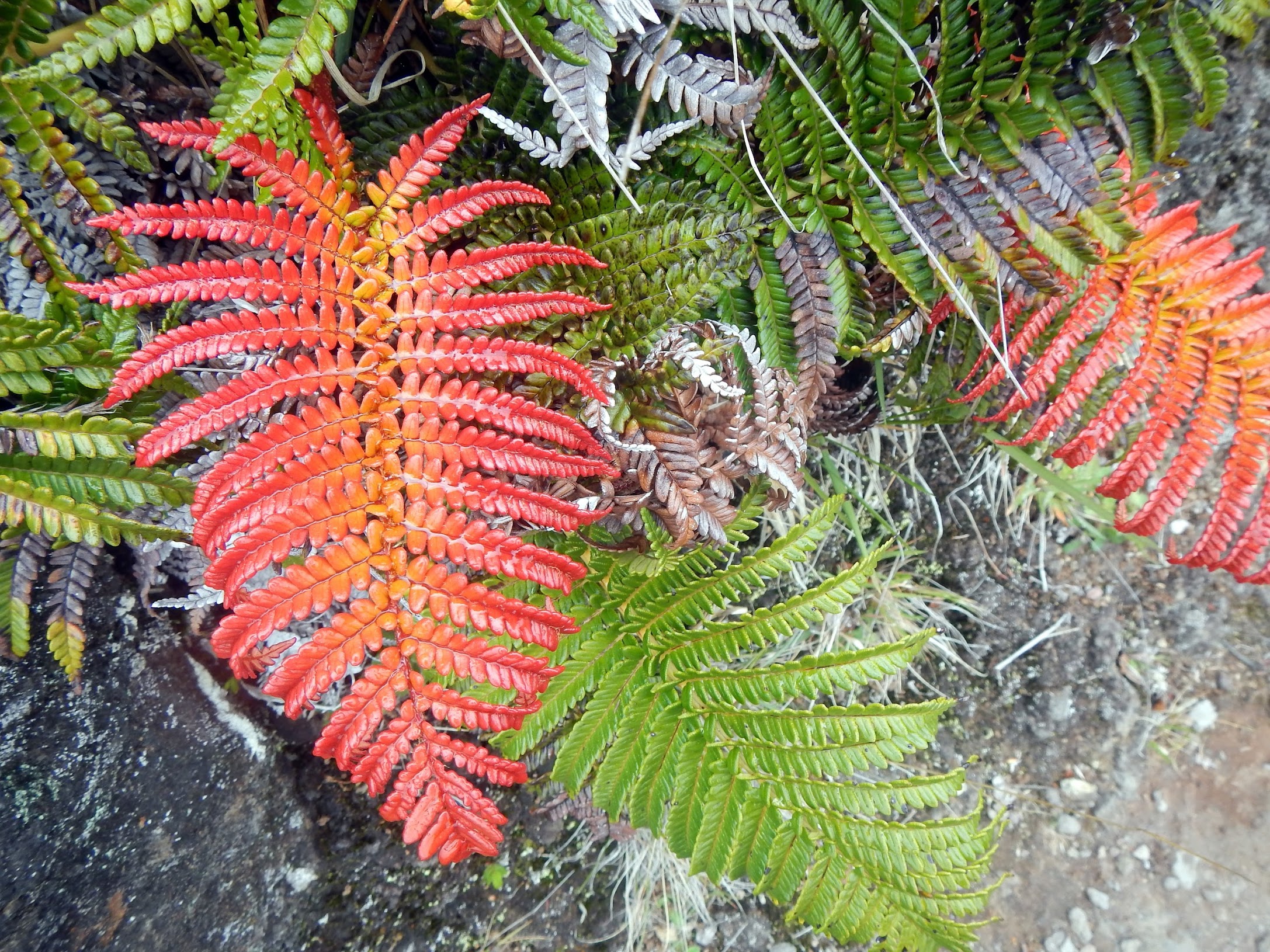 The views must be awesome on a clear day but I wondered if there’s ever a clear day on this section of trail. 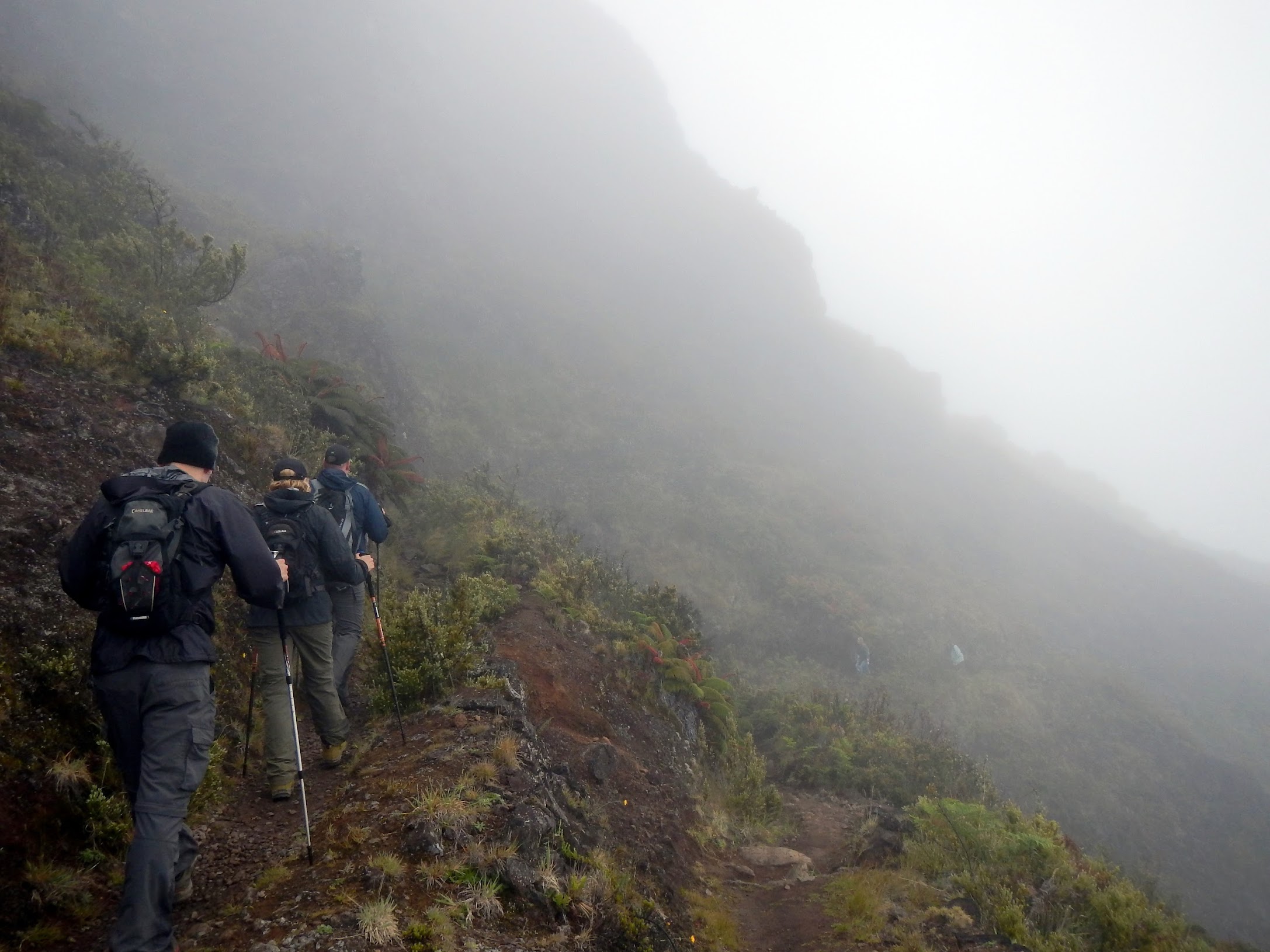 Up and up we went, leapfrogging a couple other small groups of hikers tackling this trail today. We knew we were getting close to the trail head when we started seeing flip-flops, shorts, and cotton sweatshirts.

We drove our new hiking buddies up to their car, then continued back down the mountain for one more stop.

As we pulled into the Hosmer Grove parking lot, we saw a woman with a tiny pig on a leash. Just add one more character to the running tally.

The weather was dismal. Misty, cool, poor visibility. But we were up for another half-mile of walking. This loop was well-signed with placards identifying several trees and shrubs. We saw non-native trees, like eucalyptus trees with bark that looked like camouflage print. We also learned about native species like pilo, mamane and ili’ahi (sandalwood) . I’m pretty sure we saw some honeycreepers flitting about in the trees but none came close enough to get a good look. 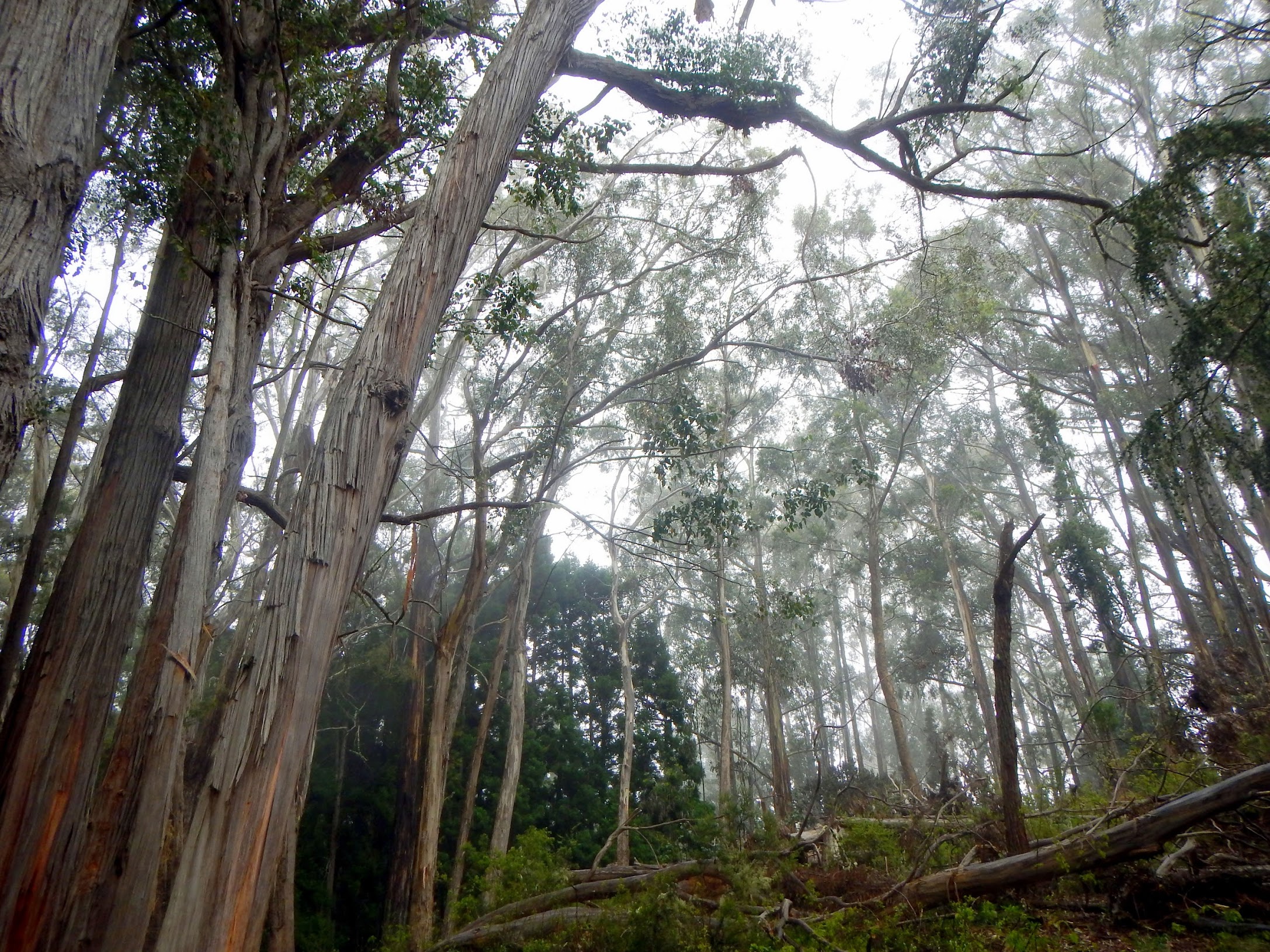 It was wet. We were muddy and tired. It was time to head home.

Back at the rental, we foraged in the kitchen to put together some sort of meal. It ended up being a pretty nice chicken and veggie stir-fry in coconut milk with ramen noodles. It was a challenge to chop meat and veggies with a dull knife on a cutting board the size of a postage stamp. Aah, rental house kitchens. They’re usually more fashion than function. I imagine most people don’t bother cooking on vacation.

Day 2 was a success. We hiked through familiar-looking volcanic terrain with a couple from the Pacific Northwest. Wait, we’re in Hawaii, right?