Photos from this trip are on Picasa. 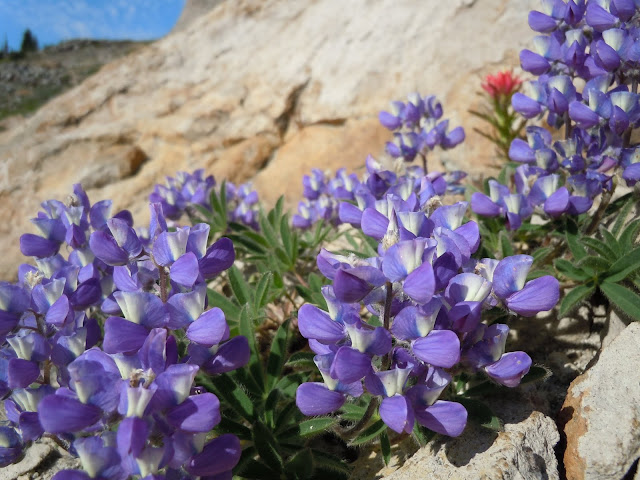 Sue and I left Portland early to arrive at what we thought was a reasonable time. When we pulled into the Snowgrass Flats trailhead parking area just before 9 am, the place was overflowing with cars. I was already not excited about my first trip to the Goat Rocks.

We walked for a couple of hours through unremarkable, forested terrain. The trail was well-maintained and well-graded, so we were able to cover a good amount of miles without too much work. We saw a handful of people who were mostly carrying overnight packs. I was happy to cruise by with just a small daypack. 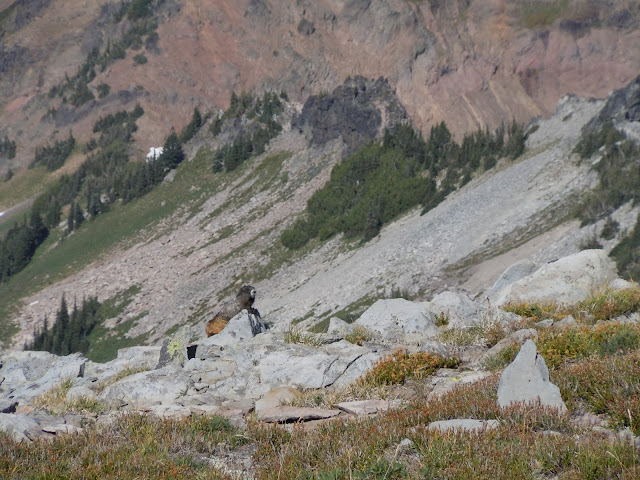 Once we broke free of the trees and entered one gorgeous meadow after another, I began warming up to the hike. An undulating ridge overlooked the colorful wildflower display at our feet. Remnant snow patches still lingered on the rocky slopes. Paintbrush, lupine, gentian, and asters provided a never-ending show of beautiful hues. We followed the trail as it gradually gained elevation along zillions of switchbacks that ascended to the highest point of the PCT in Washington State. Along the way we watched a train of horses heading up the trail, spied a lazy marmot enjoying the sunshine, and admired the intriguing rock formations. There was never a dull moment.

Once we hit the apex of the PCT we turned left to climb the north ridge of Old Snowy, our destination for the day. Ahead of us was another group of hikers with a small child, moving upwards at a glacial pace. We cruised by and were greeted at the summit by a Mazama team who were enjoying some snacks. Once the other group caught up, it got awfully crowded up there and we wanted to leave. I had gotten the idea that we could tag Ives while we were up here and it was so close. I didn’t have any specific details besides follow the ridge to the summit. 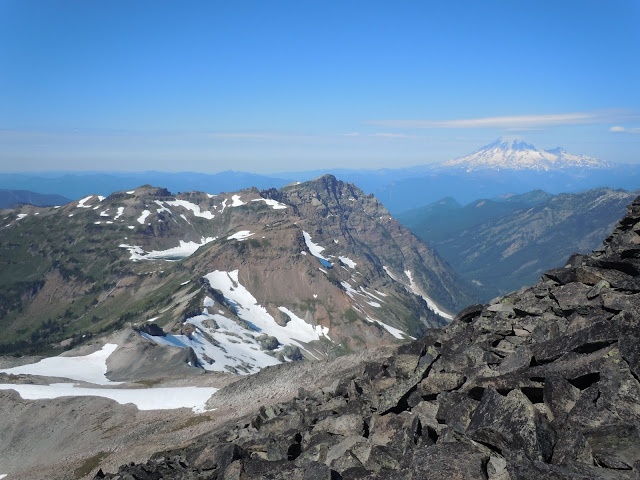 It didn’t take much convincing to get Sue to agree with the new plan, so we happily departed under sunny skies along the bumpy ridge connecting the two peaks. The route turned out to be surprisingly straightforward. We had to negotiate our way around several large gendarmes along the ridge that looked more challenging than they actually were. Along the way we came across bits and pieces of climber’s trails and the occasional series of boot tracks. There was a considerable amount of loose rock on the route that reminded me of climbing back in Oregon. We essentially followed the ridge as it rose and fell, passing by an interesting rock arch and other notable geological features, until we hit one steep talus slope taking us to the base of the summit’s ramp. From the base of the ramp we were able to follow a climber’s path up the rock to the top. 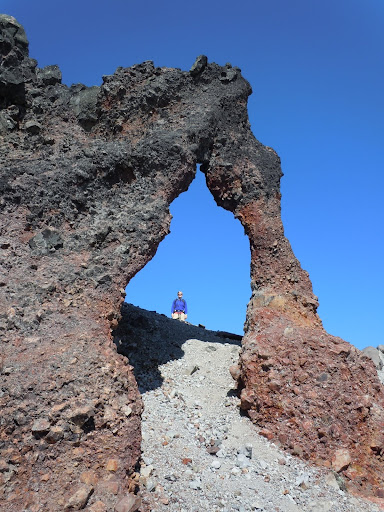 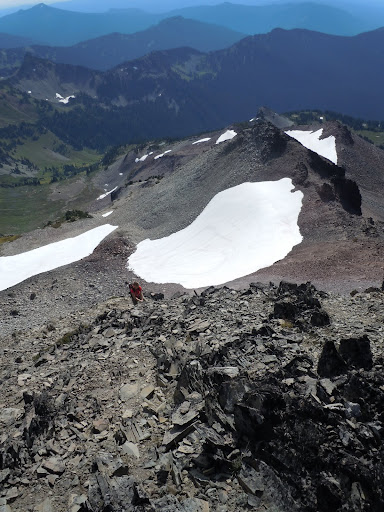 It took an hour to reach summit #2. We stopped here to soak in the solitude that we longed for on summit #1. It was beautiful up here; we got a great view of Gilbert Gottfried Peak (or Curtis-Gilbert or whatever the kids are calling it these days) as well as Mt. Adams. Although I could have sat up there for hours, we had some friends to meet at a car campground that evening, so we packed it up and eyed a route down. 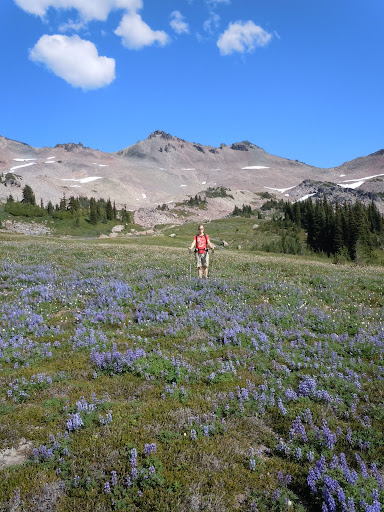 It was easy to see the PCT junction in a huge patch of dirt far below us. We headed down a talus field, crossed over some snow, then lots more rocks, until we bottomed out in the meadows. After dumping the rocks out of our boots we glided across the wildflowers to reach the trail again for some easy walking. The time from summit to trail: 1 hour.

As we walked out, we kept turning back to burn the images of the expansive and lovely Goat Rocks into our retinas. I was sad to leave the open meadows, and didn’t look forward to the treed-in slog ahead. We passed several more backpackers on their way up and I was glad that I would not be camping up here with everyone else. I suppose since the Goat Rocks are accessible for such a short period of time, that all the use is concentrated in that fleeting window. 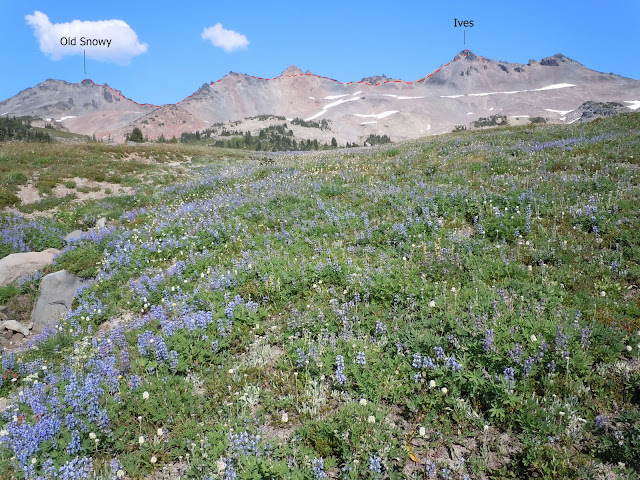 I will certainly return to the Goat Rocks, preferably in the off-season with some snowshoes or skis. There are some other peaks and areas that I am interested in exploring. This was certainly a nice introduction to the area. We took a quick jaunt up Nannie Peak the next morning before taking the long drive back to Portland.