Photos from the entire trip are on Google+. 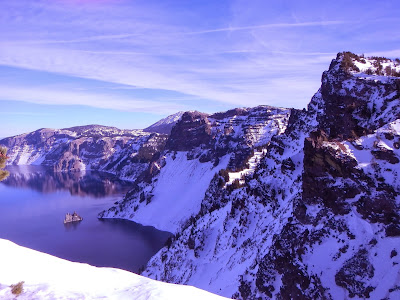 We woke up to another tremendously good weather forecast, so we had to spend another day highpointing at the park. Amy had to head back to Corvallis, so Aaron and I were on our own. The previous day, the park ranger recommended snowshoeing up to Garfield Peak, a craggy summit just east of the Park Headquarters. In the summertime, a pedestrian trail leads 1.5 miles up to the summit. However, the trail crosses some steep terrain that poses avalanche risk for the snow-covered portion of the year, so the ranger suggested an alternate route that would permit safe passage.

We parked just south of the main parking area at a small pullout and began our snowshoe trek up East Rim Drive. Previous travelers had been here, so we followed nice tracks about a mile up the road. As the terrain to our left became less jagged, and with no sign of a hidden stream threatening to soak us, we left the road and headed due north through the forest. 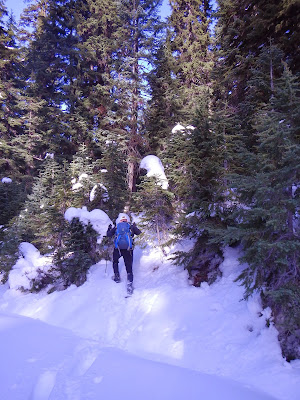 We knew there were steep cliffs to the west, somewhere, so we trended towards the east as we picked a reasonable route through the rolling hills. Trees blocked any chance of a view to the peak or to the crater rim, so we trusted the ranger’s advice and the compass, trudging northward. Eventually the thick trees gave way to huge meadows and smaller patches of evergreen forest. At last, we spotted a high point to the east. According to the map, this was most likely Applegate peak. Its broad, white shoulders looked more inviting than the patchy green forest between us and Garfield, so we decided to aim for Applegate.

Heads down, putting one foot in front of the other, we walked through a uniformly thick covering of snow that was getting denser and denser as the day wore on. The sun felt warm on our skin, although we didn’t need it to stay comfortable. Pushing uphill in unbroken snow is good, hard work. At one point, I noticed the land seemed to end abruptly somewhere in the distance. I angled upward until I reached the rim of Crater Lake. There I stood, in awe of the sight of the lake. It was a welcome image that contrasted sharply with the whites and greens we had been looking at all morning. From the rim, we looked back to see Garfield Peak and Dyer Rock, then turned towards Applegate and pushed on.

The last little bit leading to the cliffy top of Applegate Peak was sketchy at best. The angle got steeper and steeper. Patches of ice covered rock, gnarled branches, and loose scree. In other spots the snow was so thin and mushy it was easy to slip. But we made it to the top, where we had so-so views as we timidly approached the rim. (Note: so-so views here would be epic views pretty much anywhere else, so I’m not complaining.) 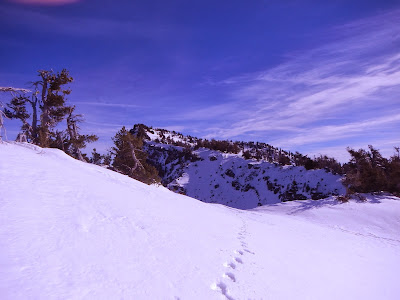 After celebrating a minor victory on the summit, we scooted back down and traversed across to Dyer Rock, where we’d have our lunch break. Along the way, we found a viewpoint of Phantom Ship, a feature we hadn’t spotted yet. This spiky rock pinnacle juts above the lake’s surface at the eastern end of Chaski Bay. We took our pictures and moved on.

Over lunch, we discussed our options. We could head back to the car now, or take advantage of this awesome weather and bag one more peak before heading out. We chose to continue to Garfield. Again we crossed pristine snow slopes, choosing the path of least resistance across the meadows to gain the south ridge. We followed the ridge up to the summit, where we celebrated again and took in 360 degree views of the surrounding area. To the north, Crater Lake’s deep blue water reflected the streaks of clouds crossing the sky. To the south and west, huge tracts of green trees dominated the landscape. A wide, yawning valley situated southeast of here looked majestic with a cloak of freezing fog clinging to its bottom. Overhead, the yellow sun was blinding. We began our final descent at about 2:30 pm and hauled out of there at lightning speed, returning to the parking area just an hour later. While we opted for the gentler, more scenic route up, we took the steep and fast route down. Three highpoints and tens of thousands of footsteps later, I felt pretty darn satisfied with our winter explorations of Crater Lake National Park. Watch for the next trip to Crater lake in 2014!